Took of fenders, bottle cages with SWAT and changed from boring heavy winter wheels to my light tubular wheelset with 1,6bar in front and 1,8bar rear. My Diverge became a new bike. And everything felt soft and comfy 🙂 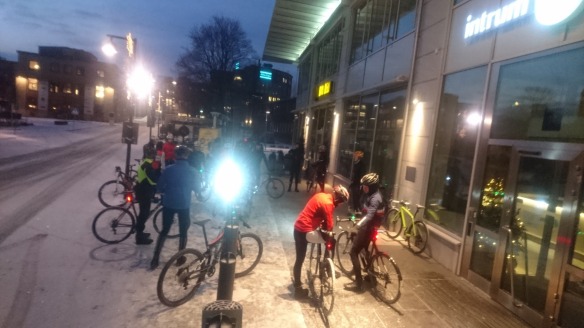 A really hard but fun ride in the light.

It was good but could have been not so good. Sara talked about crashing in the start but I said she wouldn’t. First thing we did was crash, 4 riders down including Niklas, Sara and me but it went so slow on the ice so nothing hard. Just to rise up and ride again.

Felt ok in the beginning but had to drop Sara and Rasmus after the wooden bridge a little. Caught Sara again but not for so long so ended riding alone a little until Emil and Joel got up to me on the road to Erstavik. They dropped me in the long climb out so alone again at the loop out there. Back I caught a dropped Joel and rode together for a while but he was tired and couldn’t keep up. After crossing the Ältaroad I found a new rider to chase, Rille who rode a bit to hard and we rode together the last part. Got company by Marika who had turned around a bit earlier. Rille dropped me at the end but I still got a fast lap than he 😉

Ended with the longest breakfast so far at Le Mond, their first open day 2016 today 🙂 Was photographed a little by Johan: 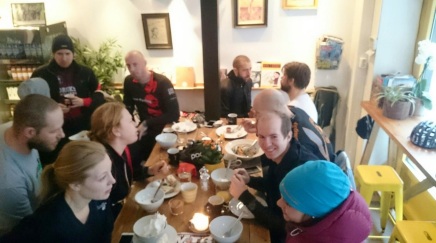 3 hours later me and Emile turned towards home but going around Vinterviken along Mälaren and enjoyed the beautiful day a bit extra and I had to take a picture of my lovely bike: