Planned and tried to blog yesterday but WordPress wasn’t with me. So today after Le Peloton #94 it’s time again.

Started the Tuesday with a Älgö Deluxe ride. Sunny and the legs felt good, we went for KOM’s and put in an average of 36km/h for a little more than an hour before we ended having breakfast in the sun: 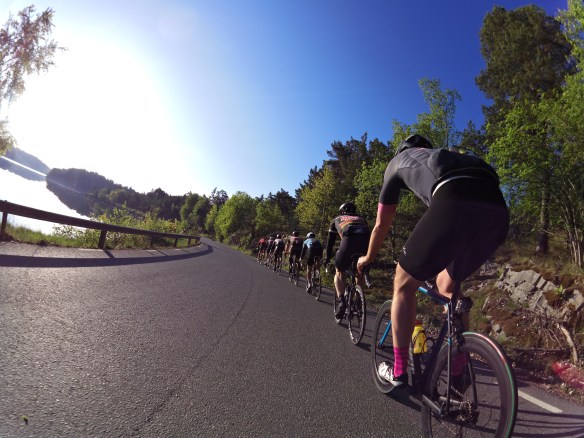 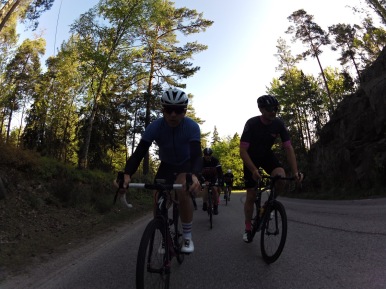 And a video by Magnus of the afterbike/breakfast:

After a day of work I joined Laterne Rouge ride for a regular ride to Gustavsberg. My plan was to take it easy and just spin at the rear end of the group. Took it easy but was hard and pushed hard some times too getting some PR and we ended with the fastest average speed so far what I’m aware of

Home for a shower and food before a good nights sleep. Up this morning to ride Le Peloton. Not the best legs as you could imaging, but with the best company as it was the premier of our new SUMO Cycling Club jersey:

No bigger group-picture today but it was many. Like 25 in the 3rd group and we where around 60 in the 1st. It’s pretty cool riding over 40km/h in the right lane and riders passing and passing for a long time in the left lane. Also gives some extra motivation riding in the SUMO jersey for the first time with such strong people. Went fine but had to cover a couple of big gaps before Sickla and on the straights to Älta where I came wrong and had a hard time keeping the wheel I felt dead after going into the front and backing of. Dropped in Storkällan and then left alone. Passed a guy who sat on my wheel just but got some help by three others in the end. A really hard ride but so fun 😀

A picture of me trying to advance with a cheering Nils behind. Was a really fast Peloton today and new KOM’s where sat on the complete ride. Fastest women and fastest man here:

Eva ”The QOM Cheetah” and Jonas with his awesome Venge ViAS.

Map and stats of that: Strava

And me after rolling to work. Tried a pair of new Oakley EV Zero these two days. just like a Prevail helmet. You put them on and just forget them, so light and easy fit. With my SUMO jersey saying ”The Lightweight Lizard” 😉