There are some nice trails pretty close to Bergen with a lot of altitude meters. Like Arnanipa:

And one I didn’t know about, Livarden:

So now just find some days to try this too 🙂 Maybe trying one downhill on the mountain here behind my house down from here:

Felt really slow today but John said that I wasn’t. Got a couple of good times on Strava and some bad. Rode the standard ride on Fløyen but another way up to Skansemyren, a bit longer. Great weather today so really fun to ride again. Love riding great trails in good weather 😀 We rode pretty close on Sticks’n’Stones too so great action, giving me some memories when me, Andreas, Olsson and Stefan rode mtb in Helsingborg many years ago. Tight fight all ride and so much fun even when the trails there wasn’t that good 😉

So pretty okey on the technical trails, time to think about lines instead of just survive them which is fun. But climbing with a fork without lock-out isn’t that fast. Even thinking of mounting the remote I have sometimes but we’ll see, a proper lock-out lever is ordered but won’t get it until the end of the month I guess.

Will rest tomorrow and on saturday after work I will ride a planned technical ride, just got to tune my fork a bit until that and it will be awesome 😀 Will also mount my Clavicula crank on my SuperSIX Evo tomorrow, been waiting too long to mount that I think.

Until next post you can watch what’s on my mind:

I’m always using Crank Brother pedals and have to rebuild them at least once a year. Works great for me and even when they are falling in pieces it’s possible to rebuild them. My Swedish friend is using XTR that so many love, today when we came up to Skomakardiket he lost a pedal. Or it got loose from the axle=new pedal. Shimano way, no service.

Was a bit tired today so slow up Fløyen and just pedaled up to Rundemann and over the top, looked like this when John turned down home:

Has been raining all week but this afternoon the weather got good again. That’s why we where riding 😉 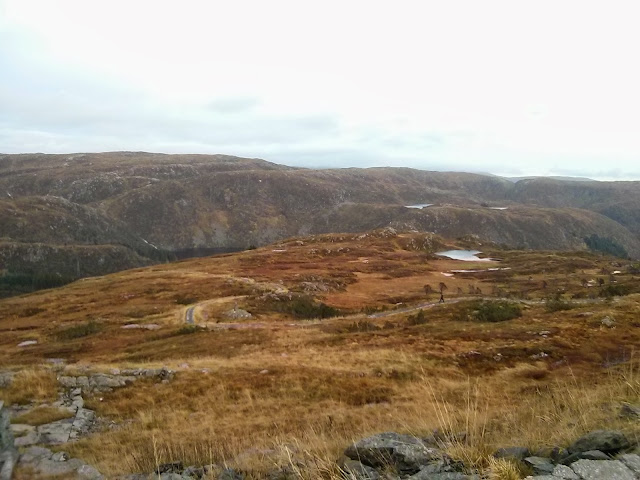 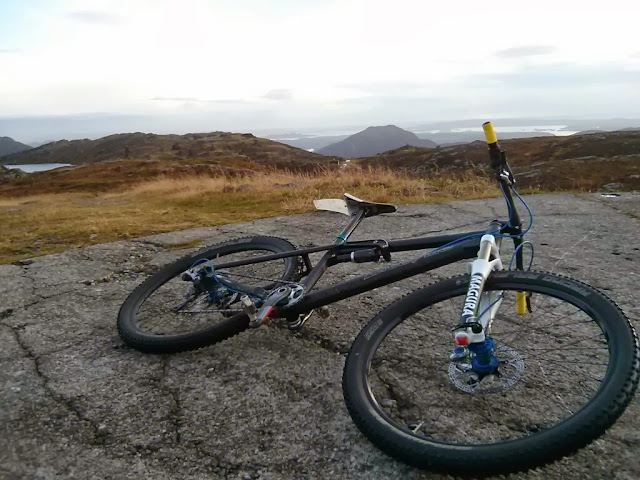 Cannondale Synapse Hi-Mod Carbon will come in a disc version! Little more expensive than Synapse Hi-Mod black so thin it will have Sram Red22 hydraulic disc brakes and so on 😀 I want, with Tune/AX-Lightness wheels, Formula brakes, Campagnolo EPS 😀

The question is can you fit a 32mm tire and go cyclocross with a roadbike? 😉

After work today I was supposed to ride with John but he went out an hour earlier than me so all I saw of him was his marks on a trail. Borrowed a 60mm stem to try as we didn’t have any 70mm. Felt pretty nice and a bit stiffer (4ZA Cirrus Pro), it was also a bit lower as the Foxfork I borrowed is pretty short. So put the fork in 100mm, locked it and the rear damper and climbed up Fløyen. Felt pretty slow and had to fight a bit. But when I got up, switched the fork to 140mm and opened it and the rear damper I felt why John and I like the Liteville before. So plush, just eats roots and feels so soft like you have punctured both tires while I still had 1,9bar in them. Just floated over the roots (almost at least) but have to get up some speed on Sticks’n’Stones trail as it’s hard to ride it as slow as I am. Rode up a bit and aimed for Fløyen Rockgarden which is the trickiest trail I’ve tried here, never managed to ride it all. Not today either but only had to step a foot down in the middle as my front wheel was sliding (hard to roll when you brake) and didn’t have it all under control all the time but a big step forward and cool when the bikes soaks up as good as it does.

Down to Stand and deliver that is an awesome singletrack, some roots but great flow with a wide trail first and ending with a really small soft part that is a bit tricky when it’s wet. Here is a couple of pictures from some turns in the middle:

Coming from the top here and turning right down with a lot of slippery roots. 180° around and then like 180° to the left where my bike lays:

Then it goes straight away. Beautiful place to ride.

After this I climbed up to Brushytten and enjoyed the way down to Munkebotn. Wasn’t all sure about how my 160mm rotors would manage it today as it goes a like 330m down in under 10min with a lot of braking. Ashima AiRotor and Formula R1 Racing did it great without any doubts 😀

Stats and map from today: Movescount

Now it’s winter here like I’ve been told it should be. Floodwarning yesterday and it was said it should come 110mm rain. Rained a lot. Today it shouldn’t rain at all att some hours, like when I thought of riding 4h. But waking up it was raining but had to ride and then forgetting my water bottle at home it wasn’t so funny.

A lot of wind but not so much rain in the beginning and it was okey. Was even a bit happy about it and thought I would ride more than 1 hour I first thought of when it was raining. Rode to Åsane and towards Salhus past Breistein. 3,1bars 40-11 and riding in 35-40km/h on the flat felt pretty good and even thought for a short while to ride over the Nordhordaland bridge but thought again as I knew I would with so much wind and 50/85mm high wheels. And then after 47min the water had come through my Rapha cycling cap and a couple of minutes later the water found the way in to my feet too. Rained a lot.

After an hour my gloves were full of cold water. So no photos from the ride today as it wasn’t so funny when the wind came wrong way, it rained that never stopped and legs that haven’t been riding on over a week.

Made it home not meeting one single cyclists and knowing that I won’t get a dog to walk outside in such weather. So now drying some clothes and changing some for a longer ride with some friends tomorrow 😀 Everything is about mood and motivation 🙂

And rechargings for Superprestige CX from Diegem at 17.00 CET 😀

And is there anyone that is interesting in tuned Sram Red shifters, Sram Red+Sram Rival rear derailleur, Sram Rival front derailleur, a new Sram PG-1070 cassette and a new KMC X10SL chain? Thinking of a new groupset for my SuperX to the spring

Tested a new road today, just going in and out so nothing to ride on a longer ride but on a short ride it’s nice. Last week was a pretty flat road with some wind. Today I didn’t have any wind but a bit colder (around 2° C).

So started with Munkebotn for a warm up 😉 and then down to Eidsvåg. Turning right to Selvik and thought it was some climbing but not as much as it was. Okey in the beginning but passing Øvre Selvik it was just straight up. Having 40-25 as lightest it got very hard, standing and riding all over the road to get up. Hard but did it. Then a little bit down again and a little bit up in the end where the road ended. A small farm in the end looking like this:

Then turning around going back down. Had some hard time braking down the steep hill but worked. And stopped to take a photo of the view halfway down:

Nice riding with some good training too so enjoyed the morningride. First time with my new Assos FuguJack winterjacket too, a bit to warm still but soon it will be perfect. 🙂

Tested a new road to Jordal this morning, just little rain so was okey and good with 8-9° C outside. Looking out from the valley:

Rode up Munkebotn on the way back to get some good training. Nice to come home after an hour and ready for breakfast 🙂

Blogged about it before https://cerrol.wordpress.com/2012/10/06/vincero-design-bottle-cage-video/ but not tested it myself. So when I got contacted by TeamKaza and got the question if we want a demo. Of course as we have cheap Zefal bottle cages, braking Zefal alu and carbon. High end we got Tune Wasserträger Uni that is awesome on mtb and good roads, but on pavé it can’t hold the bottles.

So a middle thing in price, as light as Tune and looks like this without bottle:

Makes it a good option. Even if you have two mounted it’s not sticking out that much. And you can’t break it when it’s on a mtb or if you crash. It’s just there.

But and there is a big but with this, how is it holding the bottle and how is the bottles working.

Magnet on the ”cage” and magnet on the bottle makes it sit very good. No problems or even thinking of problems on the pavé on my way home today. And after learning how to mount the bottle it works good too, takes like two mounts so easier than normal cages.

Will try it tomorrow on the distance ride too and then we’ll see what the boss at work says on monday. Anyone interested in buying them or anyone using it before?

Thought of cycling an hour on tuesday but turned around in my bed and slept instead. But today I got up in time and rode a really nice ride. Out to Åsane and Breistein with good wind and feeling pretty good. No rain before Breistein where it came a little but nothing to care about and stopped pretty fast. Then turning towards Salhus to go back along the coast. Stopped before Salhus to show you how it looks around there:

And to the south:

Nice views and a little bit later the sun came a little and made it beautiful. Good ride with low energy at the end so was nice to come home and eat some breakfast 🙂