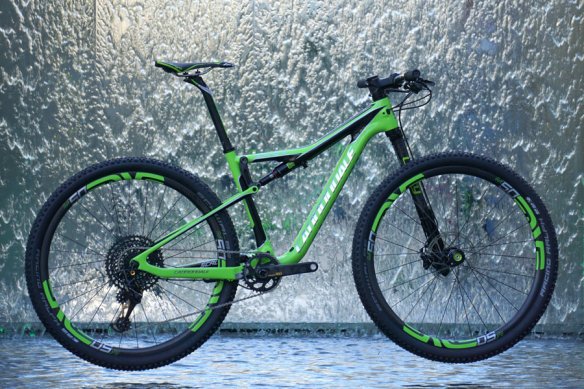 Asymmetric Integration that moves the drivetrain out 6mm with changing the center of the hub. stiffer but without having to use Boost. So 12×142 like it should be. 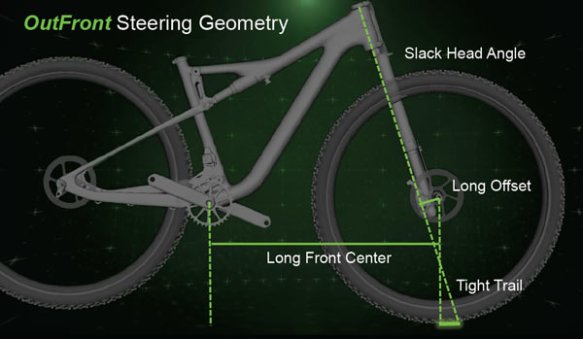 Modern geo, 1,5° slacker head angle than on a Specialized Epic World Cup which seems a lot but Cannondale like their slack angles.

An interesting thing is that if you use Di2 you have the battery inside the toptube attached to the rear damper. All possibilities to use a dropper post.

More info about it here: Bikerumor

My first thoughts about it is that it’s a great upgrade and it was really time for it. But compared to Specialized it doesn’t seem as tight and racy as an Epic but I may have wrong. Would be nice to try it and compare.

Tomorrow is the day Cannondale’s: Built for XXC will be released. Everyone knows already that is it about the new Cannondale Scalpel Si. Cannondale has some to catch up on FS XC racebikes and will they manage it? Will they use Ai6 for 12x142mm? What’s in front of the rear damper inside the frame? How low stack will it have? Is it fast? Light? 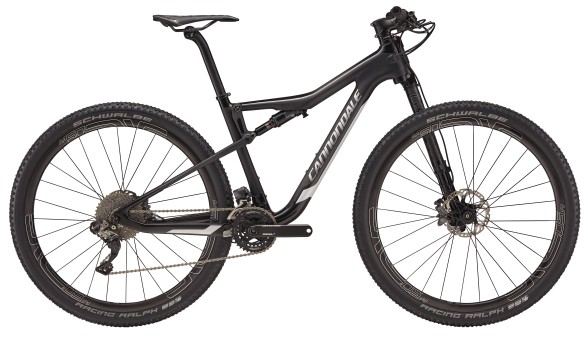 Black Inc, nothing for me or my style but have to be available for those who want’s the latest tech and fallen for the Enve hype. 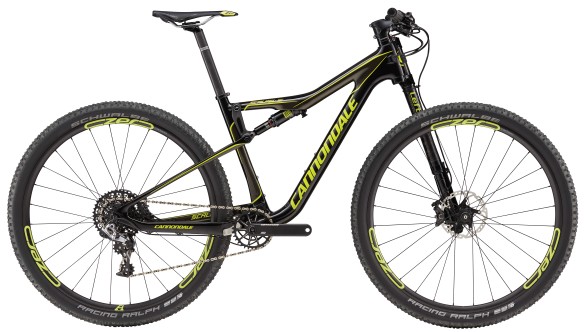 And the bike for all Cannondale lovers. The quality of XX1, the stiffness and pure beauty of Hollowgram with an OPI ring. It got it all except a flashy seatpost. Probably for a price not even Canyon can compete with.

My expectations are high, will it be even close to as tight and racy as a Specialized Epic WC? How short will the chainstays be? More info tomorrow after I’ve tried the fastest gravelmtb in Stockholm (more on that too).

It was rumors about a new Scalpel this year as the last one lacks some things. And now at Cape Epic it’s being raced on for the first time: 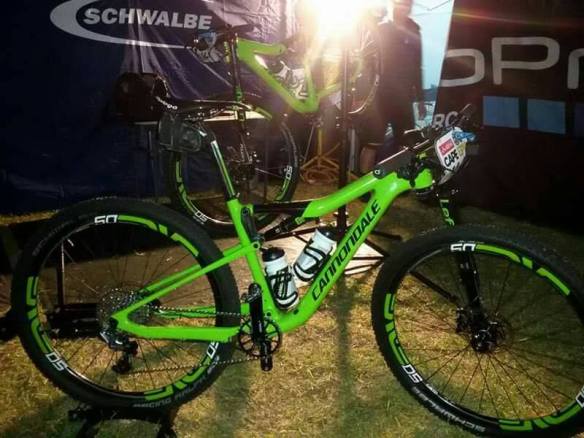 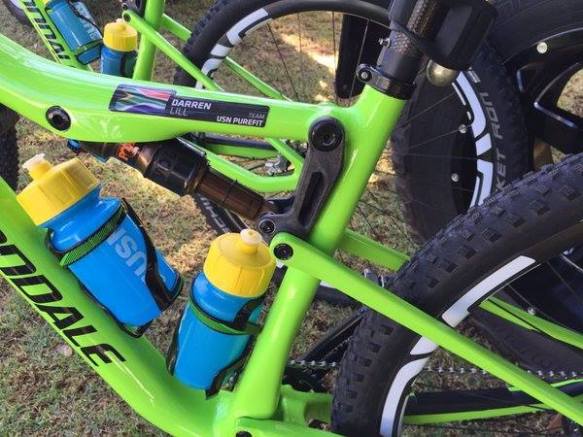 Not the best picture but lowered in front to work with new Leftys: 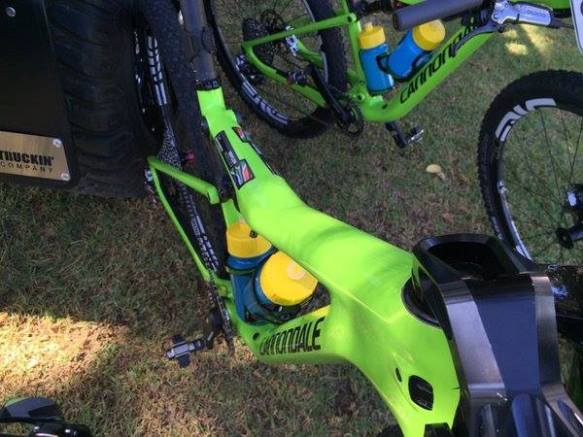 A redesigned rear triangle with a new shocklink and a more tucked in rear damper. Also got internal routing 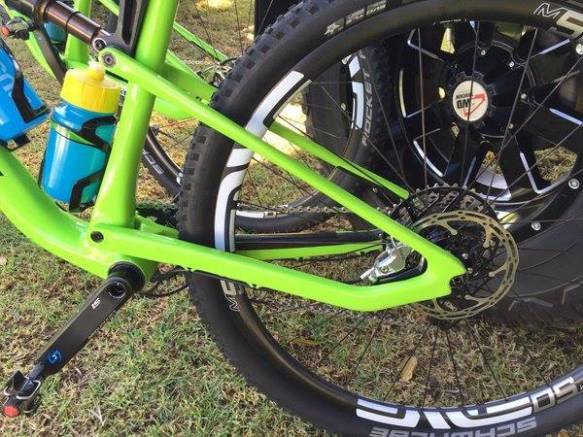 Curious on the official news and geometry. Will it be as good as the upgrade from Flash to F-Si? 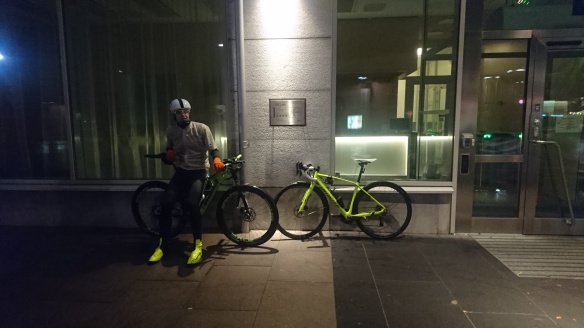 2 green bikes, 2 Jonas. Fridays Peloton was really wet and we only were 3 guys, Christian came a little later.

Jonas and Christian are fast and I’m not, but they are kind and waited for me. I got a really great training and my POC rainjacket really did it’s job.

Me and Christian at Le Mond, wasn’t so clean 😉 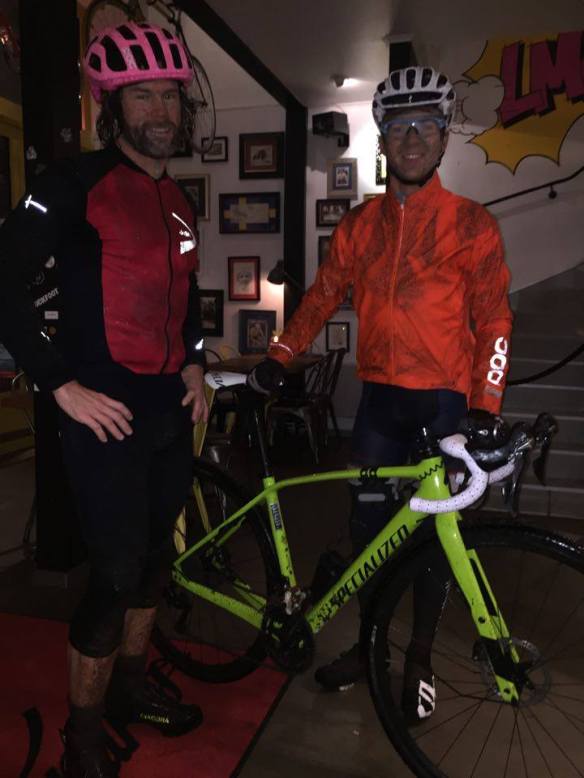 Let’s hope more people come and ride with us on wednesday. It’s epic 😉

Not as big changes as I hoped for but it should be a bit lower in the front as they use the new Lefty 2.0 fork. Other news are Cannondale Czero carbon rims and Spidering for Sram 1×11 which looks really good. 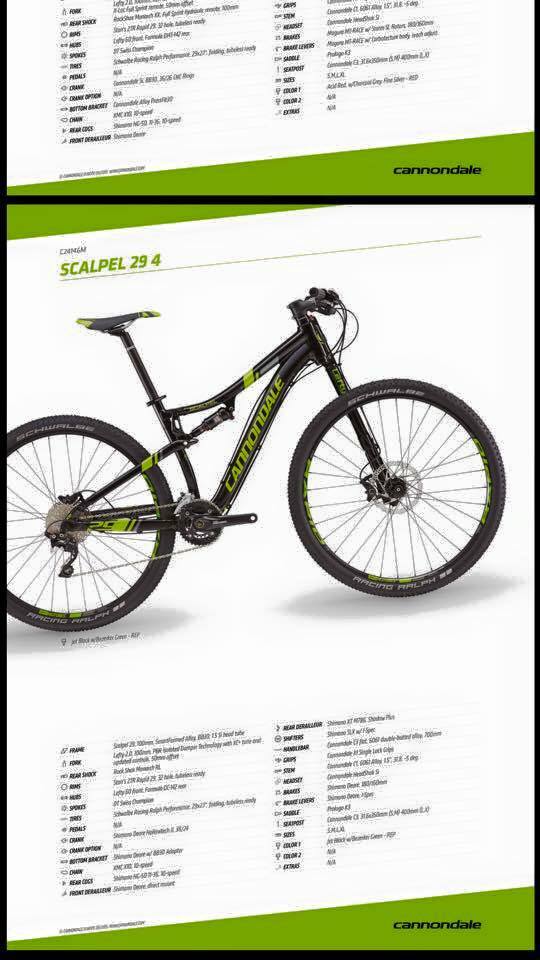 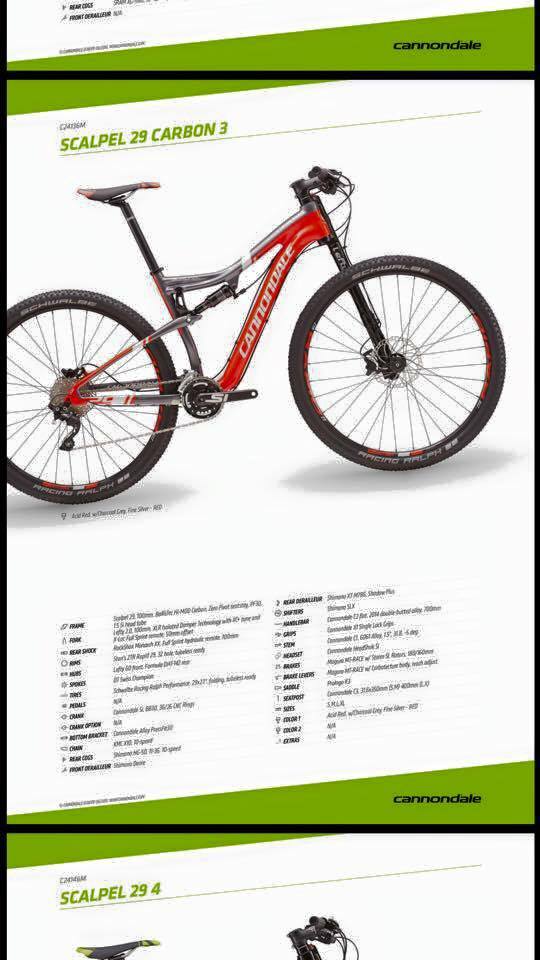 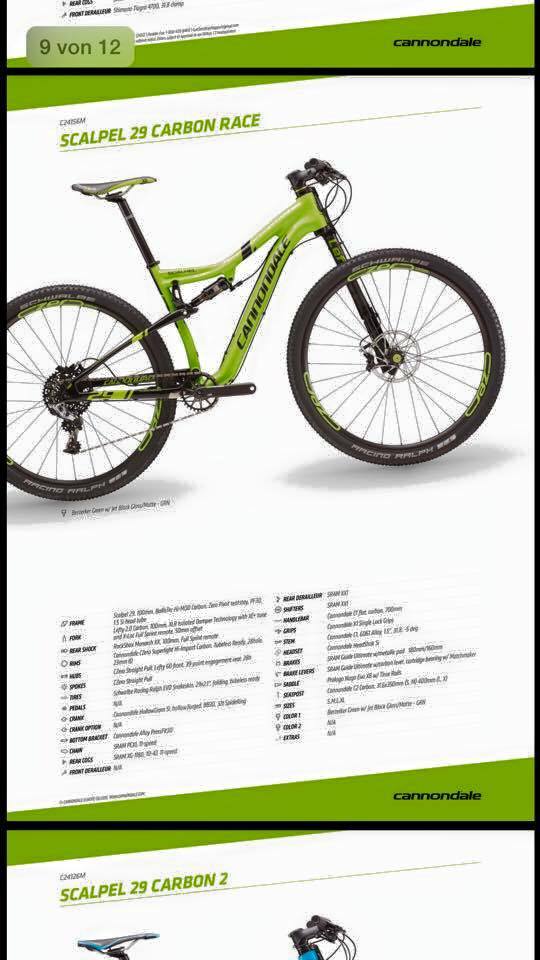 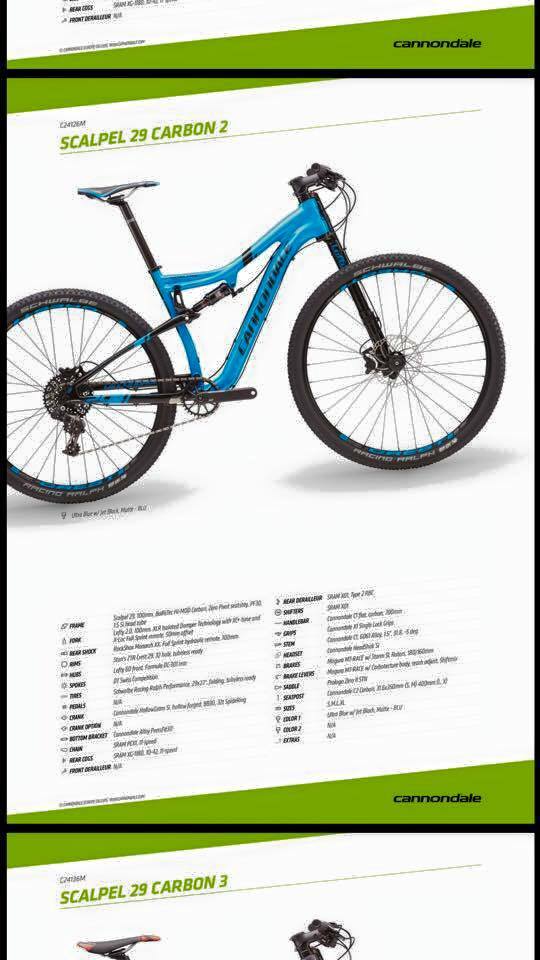 And a picture of the Cyclocross CaadX Ultegra: 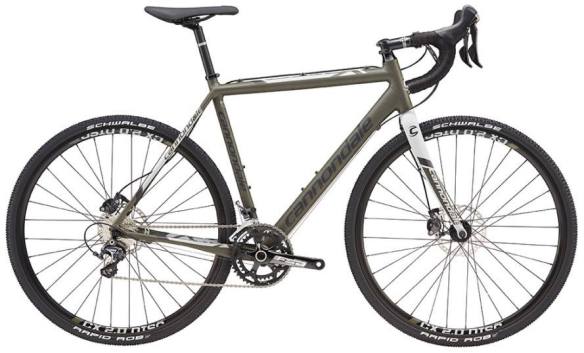 Biggest complain about 29ers have been weight but now it’s getting closer to the older 26″. A 26″ full suspension that where used in races was Cannondale Scalpel, I had one at 7,98kg: 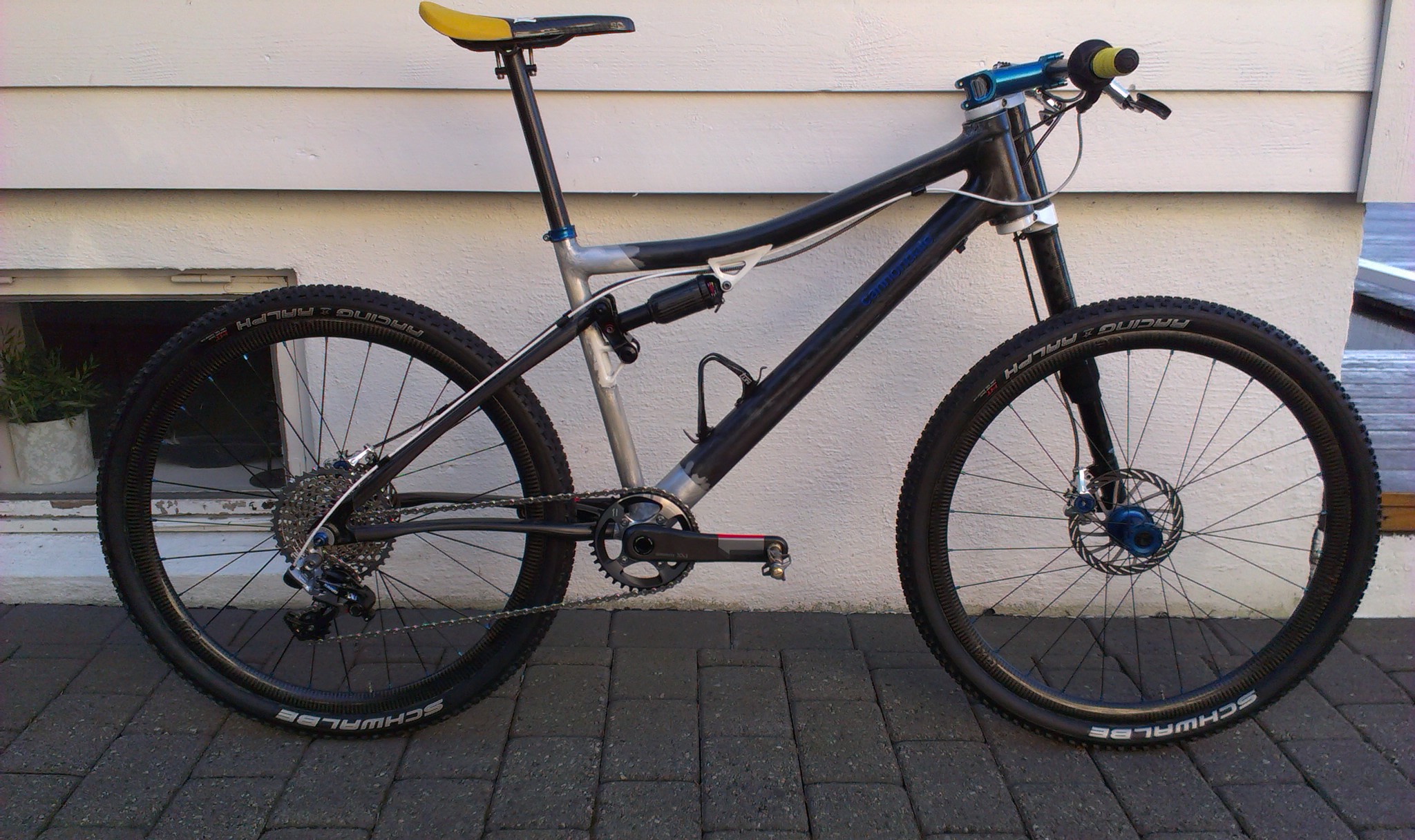 Eliflap who built the role model built this one at just 7,59kg:

Now there is riders using the new 29er Scalpel, Scott spark BMC fs… but no other bike has been as successful as Specialized Epic.

So here we have a really light Specialized Epic World Cup 2015: 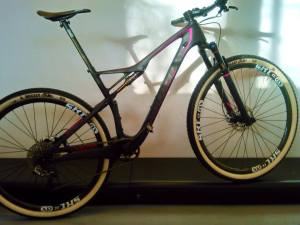 8,5kg with paint 😉 but without bottle cage.

When are we getting 29er full suspensionbikes under 8kg?

Best training after I moved to Tønsberg today. Rode 18km to the race, a testlap and some warm up, rode the race, or 3 laps, and ending with riding back home.

The course was brutal, it was either steep climb or technical descend. Some flat in the middle on top and in the end but never any rest. Or time to drink. 170 in average heart rate and with a speed of 9km/h the testlap. At the start it came some drops of water but soon changed.

So starting with men elite that included the Norwegian national XC team. Was 4 riders in the first long climb, two rode ahead and I think I dropped one. Not sure if he passed me later or not. Was just to ride as hard as possible and let people by when the other categories came. Didn’t expect so technical XC course but they got skills here. Hard, technical and sometimes very funny too. No gravel racing 😀

On the last descend there was two lines, one A and one B. On the testlap I took the B-line but was steep with loose gravel and some roots so crashed in the end. In the race I took the A-line with was just a steep drop and no problems 🙂 Strange with an easier A-line than B-line.

After that descend on the third lap out of four in the last forrest section I came all wrong on a rock and punctured. First real puncture since summer 2011!

Walked to the finish and hoped it was fine as the winner already lapped me twice.

Rune also got me a new tube so I could ride home because this is not fun to ride on: 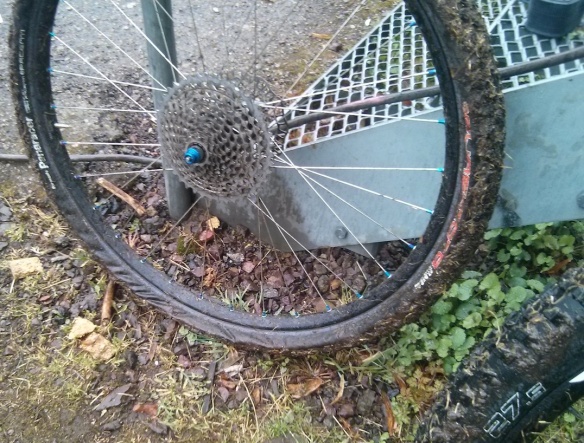 My bike that worked flawless except tire issue without grip and the puncture: 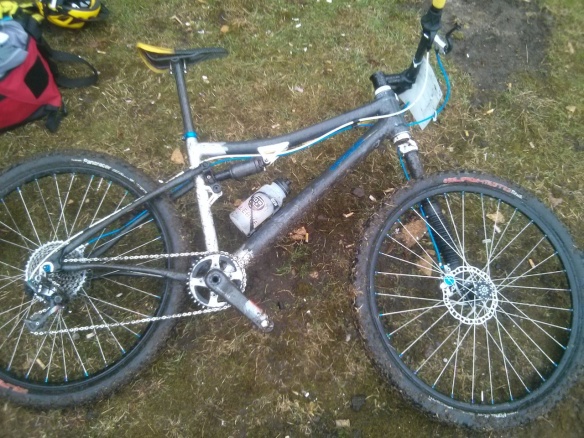 And as I said the weather changed so started snowing a bit, warm snow made the course very slippery. Here is a big part of it, climbing sections but can’t see it all. And can’t see the great rocky descends I liked: 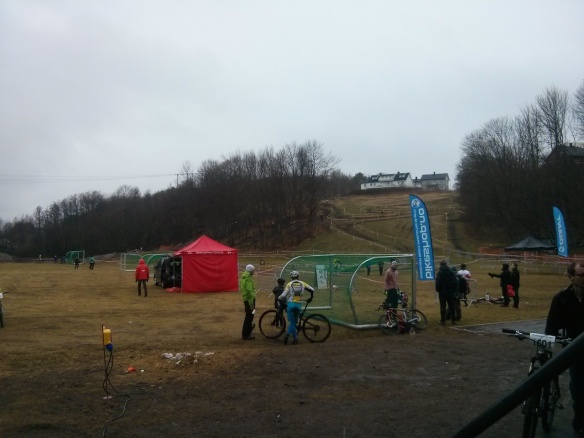 Stats from the race: Movescount

If you want to race on this course with fast riders I can recommend the Norwegian XC Cup 16-17 augusti. An UCI race so UCIpoints too. Super course if you’re fast and not like me 😉

First race that I will race in tomorrow. So time for preparation and try to seem good when my shape is gone. After yesterdays loss of air and unable to get air in my tire I had to invest today. First time owning a tube in over 2 years 😉 And what a tube I’ve bought on Veloshop: 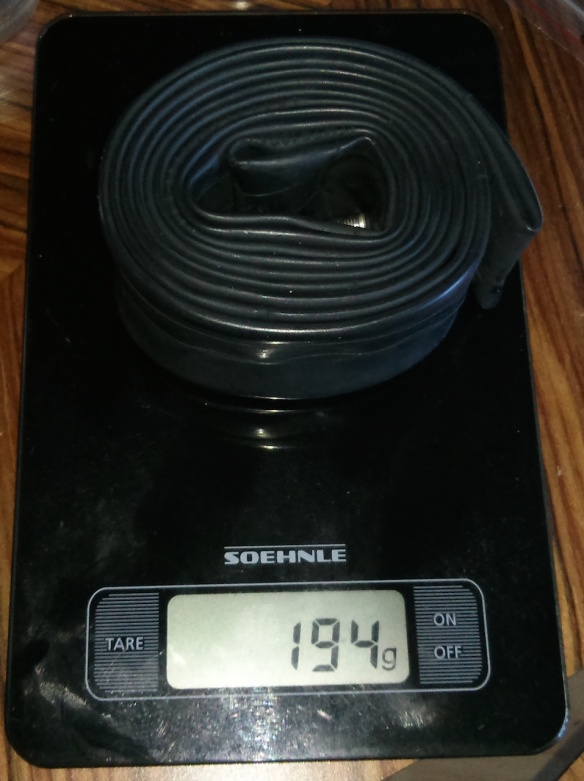 Didn’t have any super latex tubes and didn’t want to buy a light one as I will use this 26″ tube for 27,5″. So Continental 26 presta it is, getting my bike at least 120g heavier.

But will loose because of my training, not because of my super bike I think so no big worries. 😉 Giant Cup starts tomorrow and I’m on the startlist as number 730 in Men Elite. No other category for me who is under 30 years. So my plan is to keep away from getting lapped.

Giant Cup is a small local Cup here in Norway. Except that is a lot of good riders close to here so big change from the start fields in Continental Cup around Bergen where I lived before. 31 riders in Men Elite. Guess my place?

Next two races in the cup is also the first races of the National XC Cup in Norway starting next week. Exciting and here is a great promotion for it. Are you coming?

Changed for my Sram XX1 crankset yesterday, upgraded from 34t to 36t and changed the rotors that was worn down to Ashima AiRotor. Gained around 200g so 8,71kg Cannondale Scalpel this morning

Tried to find every singletrack possible in the forrest north from my house. Some nice flat twisty ones and a lot of up or down. The forrest is a hill and there is a lot of tracks up and down. Thought of my friend Leif today as I climbed a technical singletrack, really nice when you climb standing with 36-42 gearing because it’s so step and you got grip and managed all the rocks and things in the way with traction 😀

Thought about a new thing today too. Earlier everyone used Continental Race King Supersonic tire. A big light tire with really thin sidewalls. Then people went for Racesport with better but still papersidewalls or Schwalbe Racing Ralph. My Panaracer Quasi-Moto isn’t as light as those and doesn’t have so thin sidewalls or even paperlike. It got a really soft rubber sidewalls that works really good with low pressure. Like on CX comparing a Tufo tubular with A. Dugast or FMB. Think about that next time you buy tires, feel the difference in the rubber.

Ended the ride (where I paused a bit in the middle) with a ride up to Slottsfjellet which is the most famous place in Tønsberg. A hill with a castle tower in the middle. This is how it looks from there: 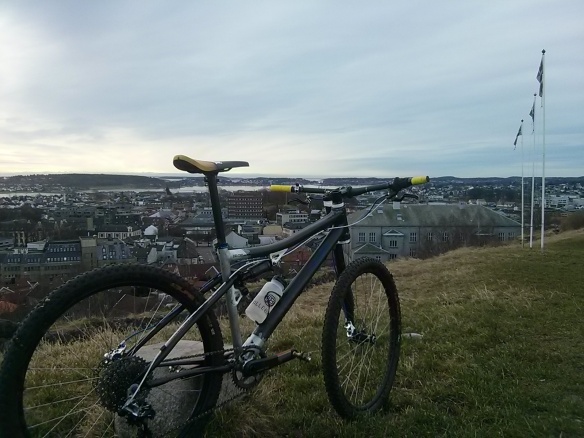 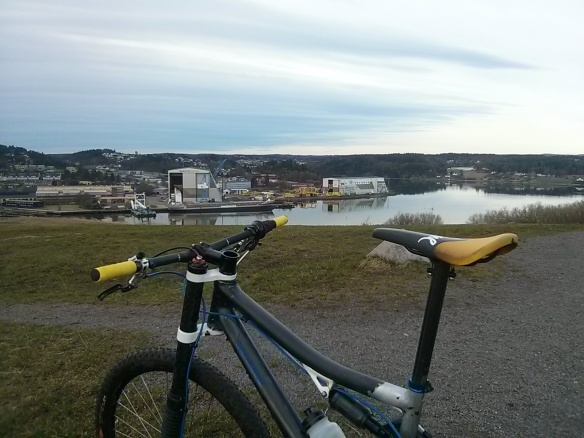 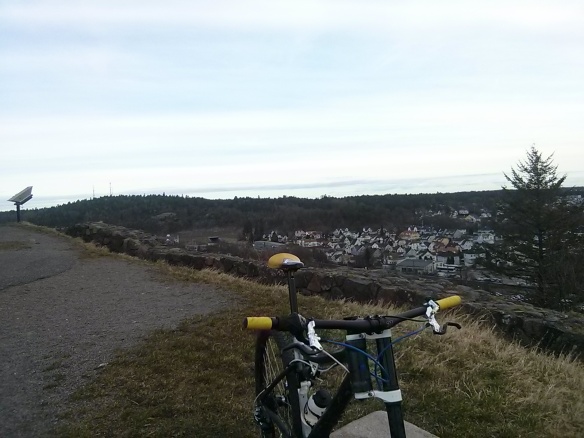 and me trying to match my bike 😉 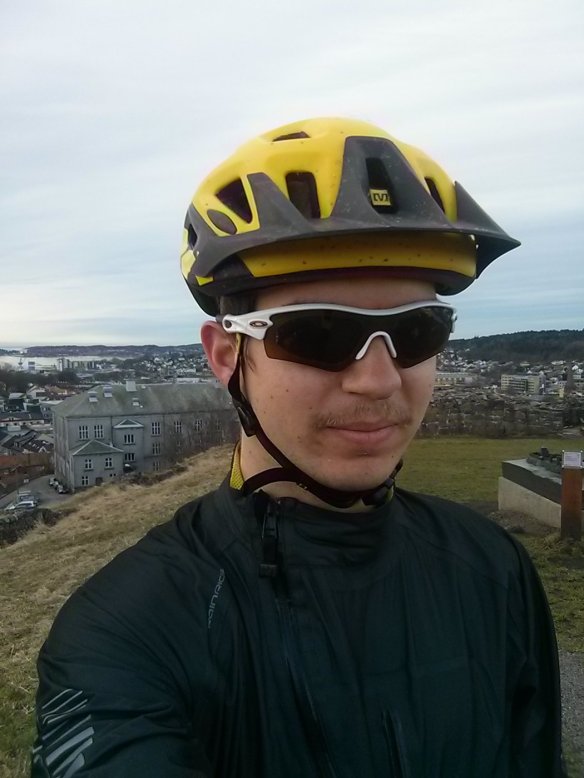 A little more than 1h52min yesterday and today I came 54min from home aiming for Esso forrest and another one at Barkåker. South swedish type of trails here but closer 😉 Some nice singletracks and really liked my bike. Was riding along the sea on a rocky singletrack when I heard something break. It felt strange and I looked down. My spindle in the crankset broke and the crankarms changed position when I tried to pedal. Result: 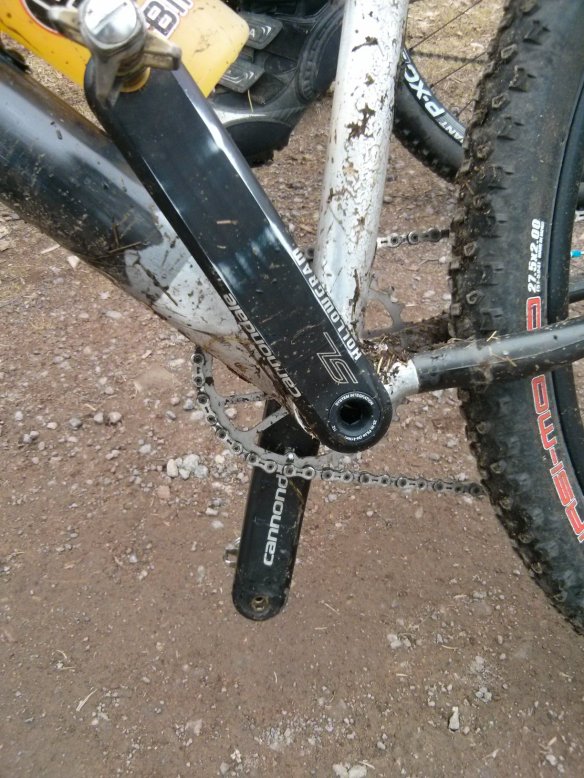 Like to optimize things and save weight but sometimes I wish I was just mainstream and used parts that works all the time. Trusted this spindle from EP but it failed anyway 😦

My ride today that was supposed to last more than double the time and end riding back home: Movescount