This morning I was tired as usual at 5.10 but riding fast with great people and push limits is too fun to miss 🙂

Met some people at Urban Deli: 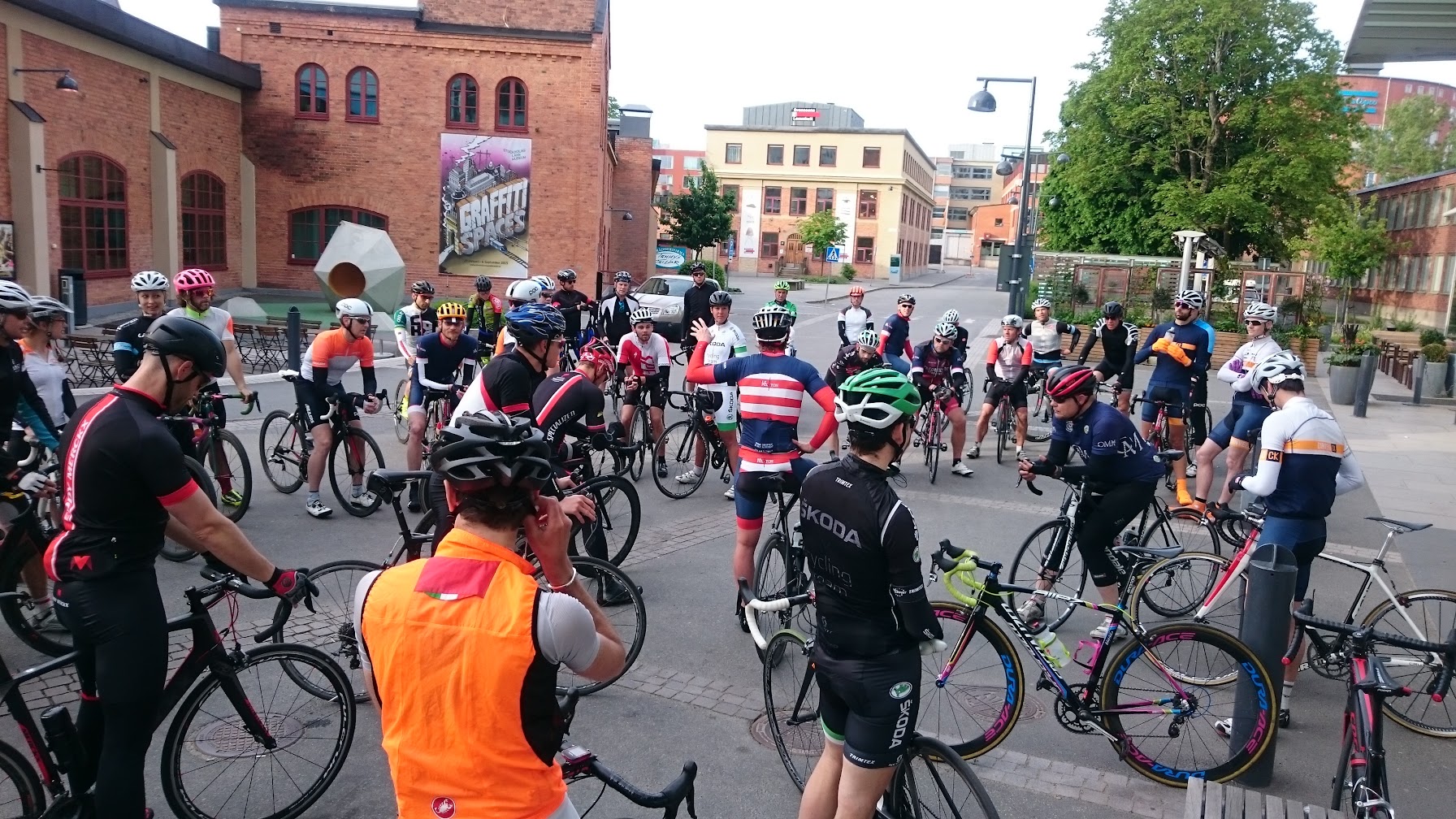 Then we rode away. Was doing okey up to Fisksätra then the 3 hard parts comes.

1st is up to the Ektorp roundabout. Important to sit well and hang on to not get dropped. I was doing okey but after the roundabout they got turbo in the front and people where flying off. A guy in front of me started to drop so I sprinted passed him but it was people with big gaps all climb. Happily it came a redlight and the bunch got back together.

2nd is after the roundabouts in Sickla and up to Hästhagen. Not steep or anything special but it usually goes fast and it’s important to save some energy for the climb up to Hellas. Went good on Christer’s wheel 🙂 And the rode to Älta felt pretty good too, could keep up and felt that I sat in the middle of the bunch instead of last.

Up Lindalen went okey to but it was hard afterwards.

3rd is the next roundabouts where I usually max out but still have a gap and get dropped. Today I could keep up. Felt so good so on the Flaten road I was a bit in the front too, asking what I did there 😉

Then in the bunch there was a guy on clinchers that got a flat rear tire. Never seen it before but it didn’t look so good as we where doing an average of 45km/h on that road. Advanced a bit in the last climb before turning in to Skarpnäck. Came in the corner as 3rd behind Nils and a triathlete. After a bus and keeping the same positions through Skarpnäck and out on the road towards Enskededalen. After that last corner when I was sprinting to keep the wheel in front of me a friend said he pushed 800 watt to keep up on my wheel 😉

Then it was a bit of uphill and it looked like this. I’m the first guy in white helmet:

To be in such good position and seeing this picture of people getting dropped is a bit of fun. I’m getting better and seeing some results 😀 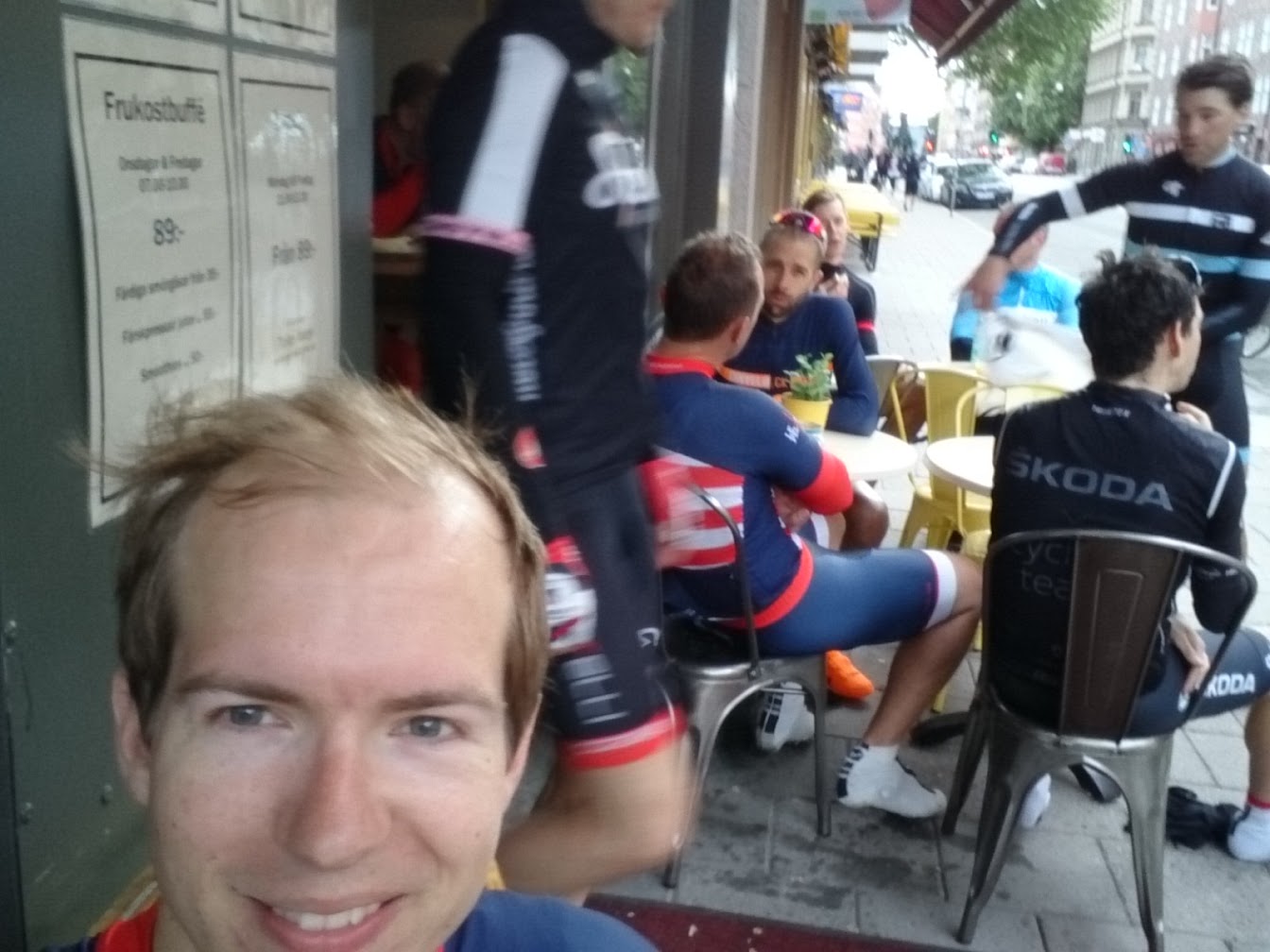 So after a great and hard morning I had a super after work planned. Riding in the sun, short-short with nice cool people and enjoy my Allez 🙂 Some pictures from that: 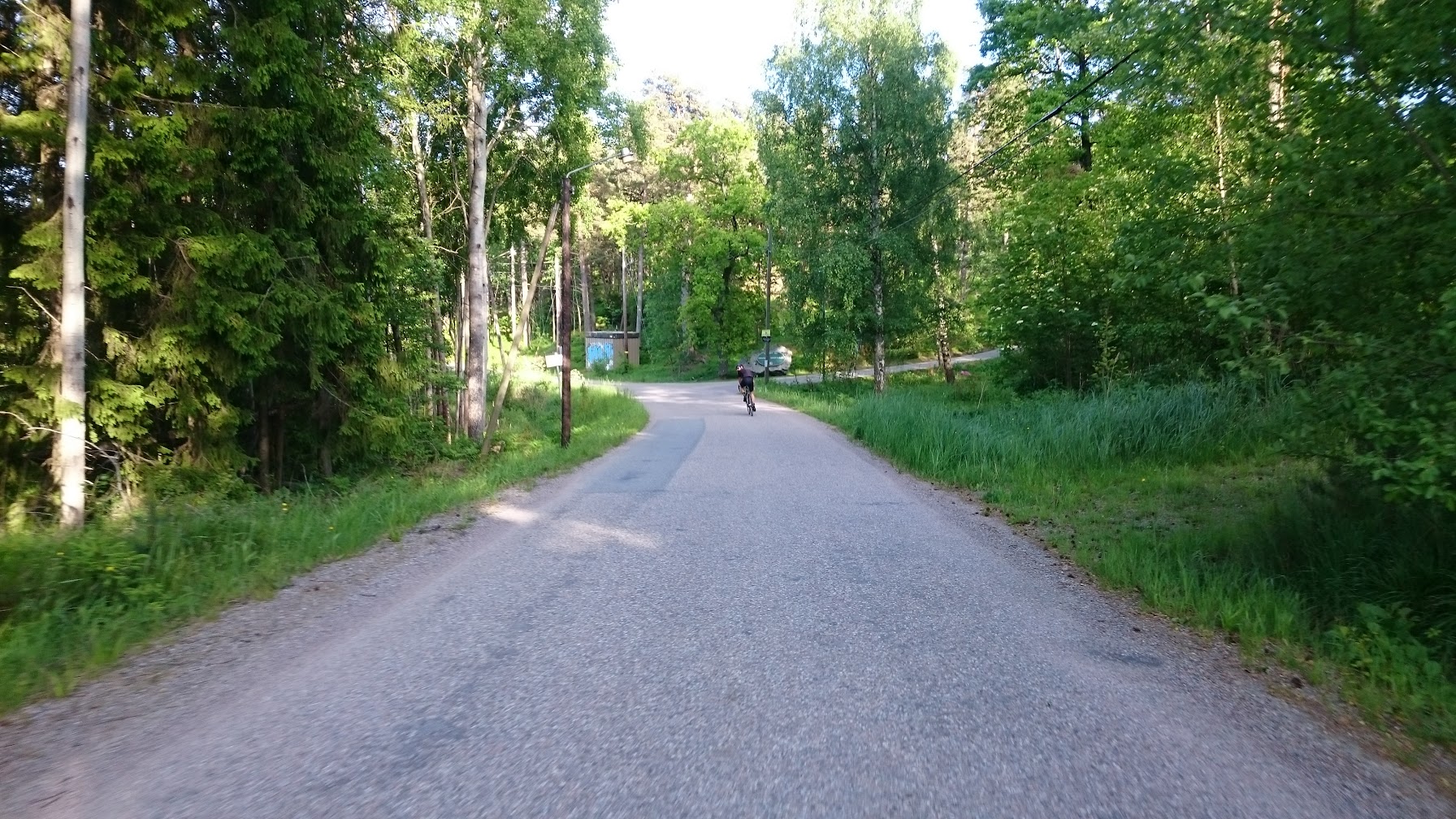 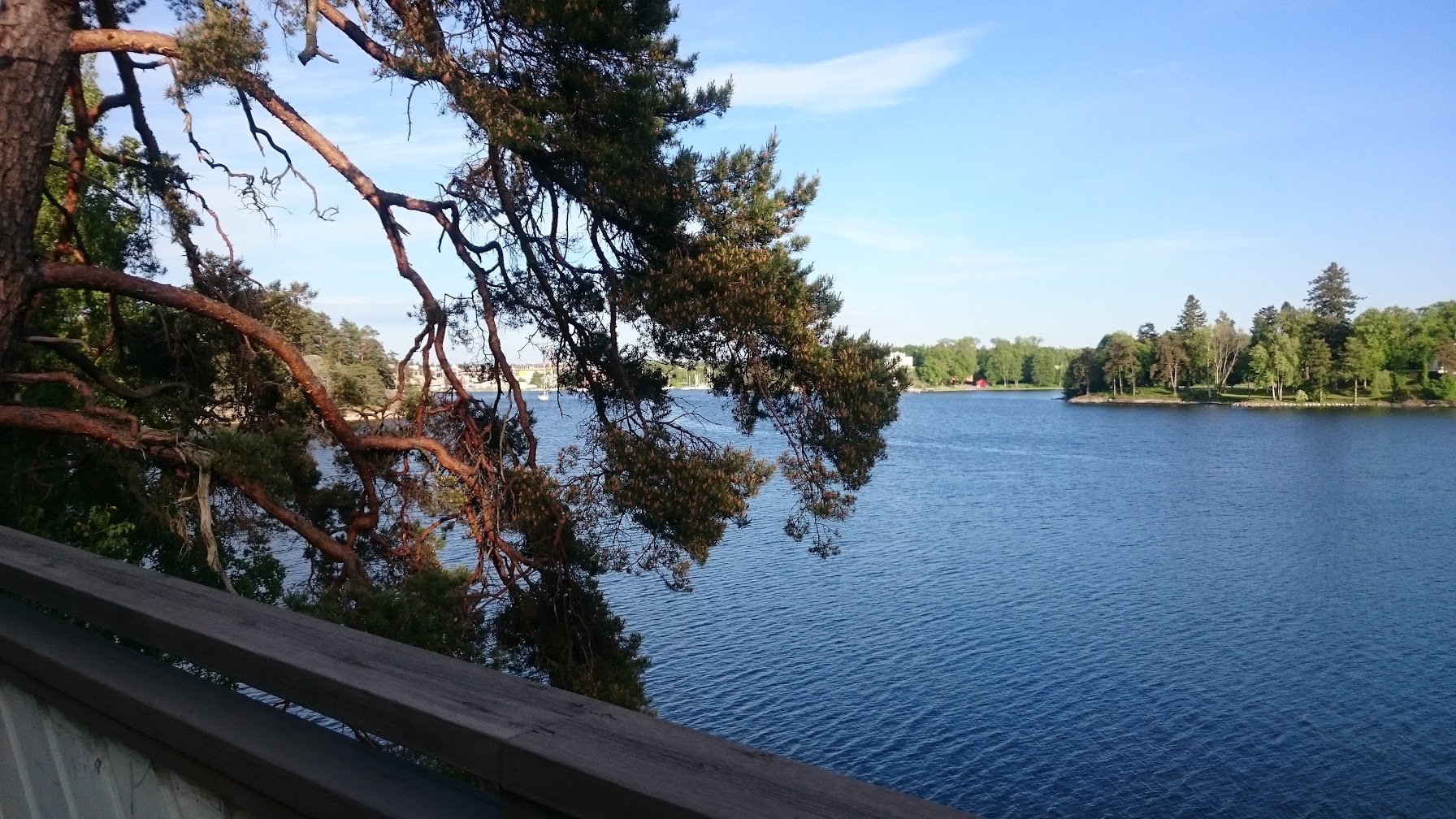 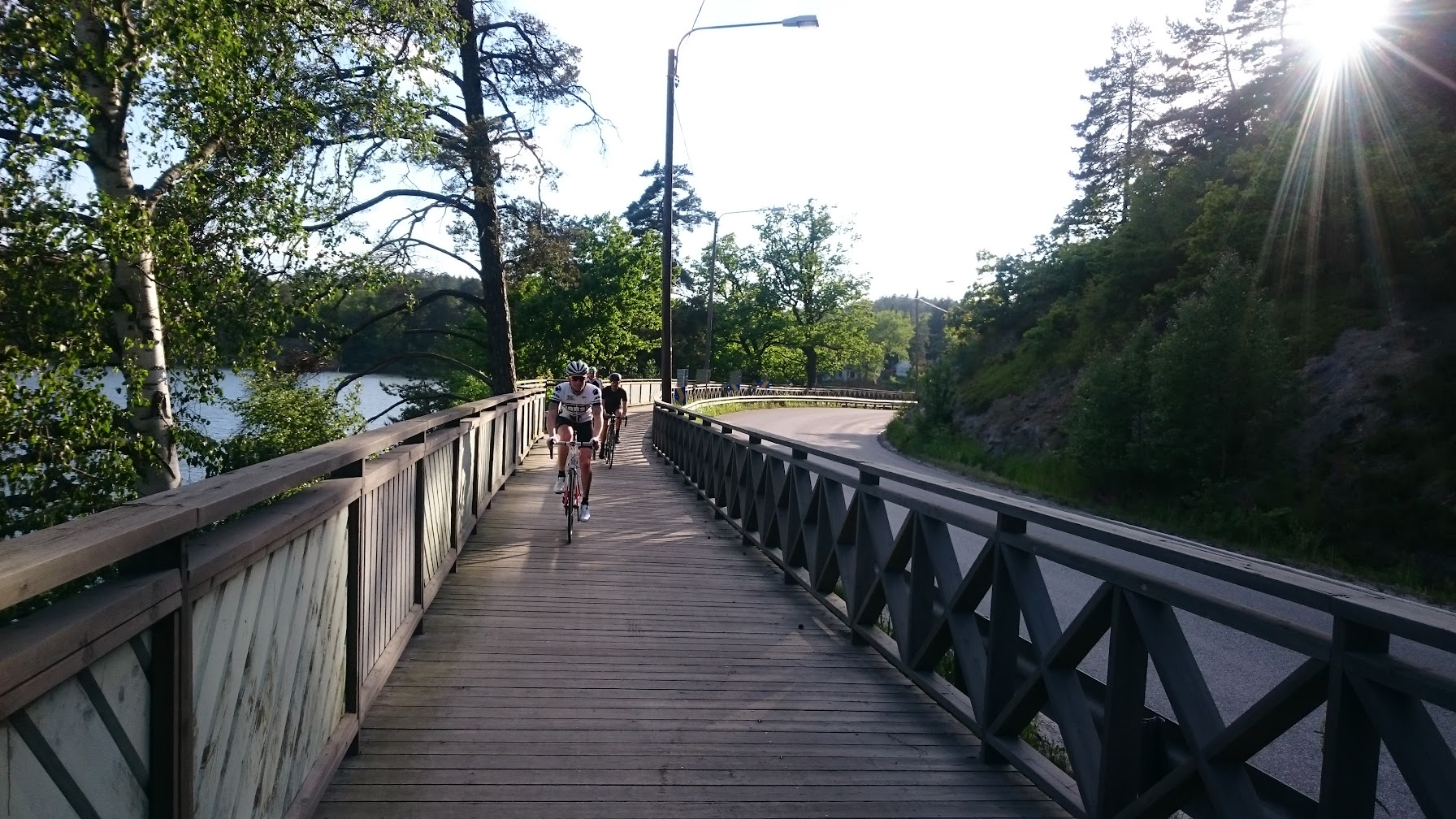 Then I started to feel a bit of play while I was pedaling. Felt like my left pedal was worn down or something like that. Stopped a bit later for Patch to fix his seatpost and I tried to find it here:

And found the problem. My crank was loose, the bolt in the middle had become loose so nothing worn out. 🙂 Happy but boring as I left the others riding easy back to work to tighten it again. Didn’t want to ruin a super Specialized S-Works crankset. Left after this:

Tightened the crank at work, strange that the bolt was loose as I tightened after I serviced my bike yesterday morning. While working down there I also checked the pedals. The left one felt like it was loose to but when trying to tighten it it was tight. The metal insert with threads in the carbon arm had loosened 😦 So now I got a Specialized S-Works crankset that is worthless, and a roadbike not safe to ride. Don’t want to end up with the pedal coming out. Couldn’t come at a worse time I think. 😦

Sunny sunday today and is there anything better than enjoying it with 2 good friends riding nice roads? Met up with Emil and Jimmie at bikecafé Le Mond today and headed through city to go to Vaxholm, like around Lidingö 😉 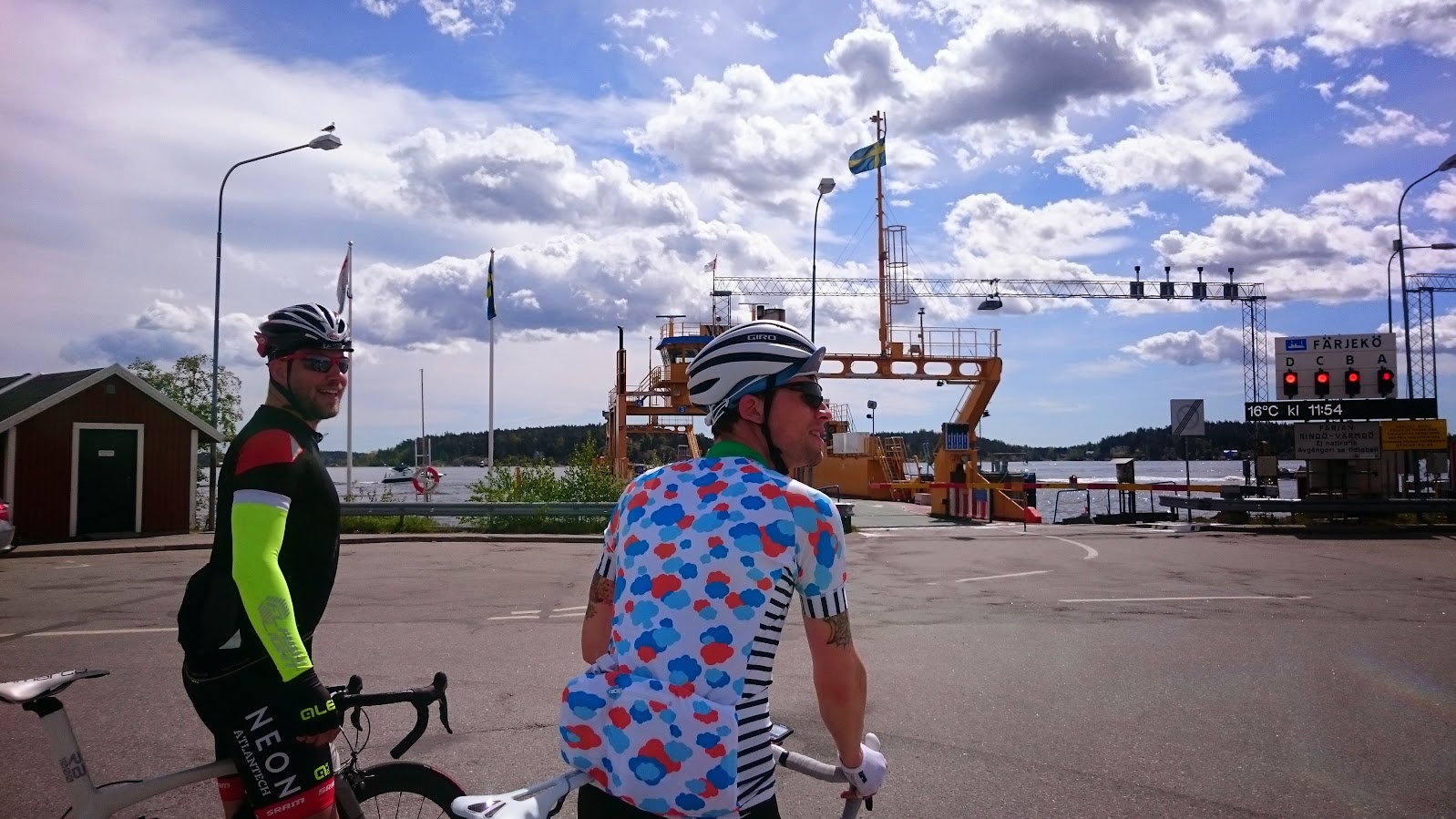 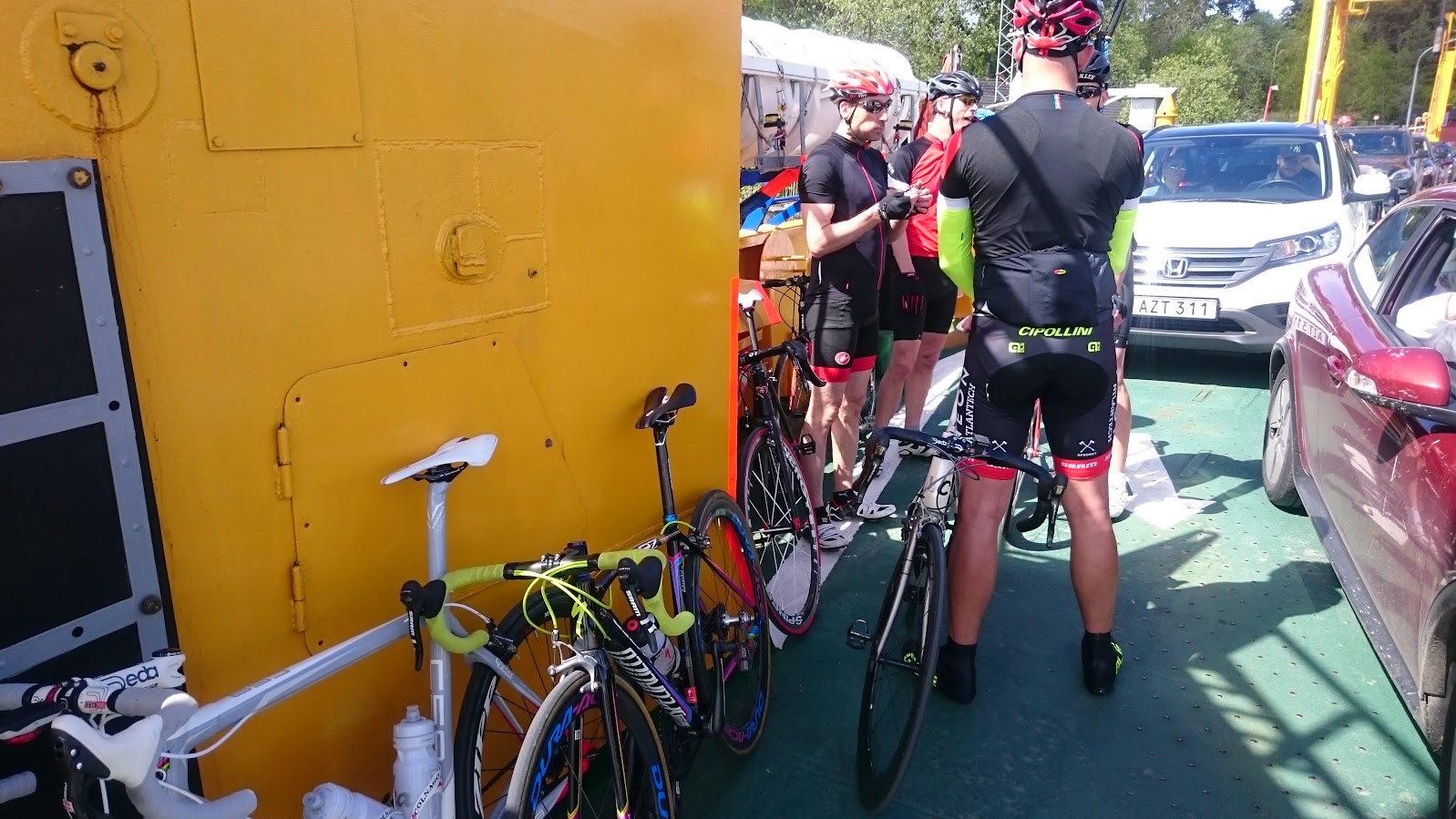 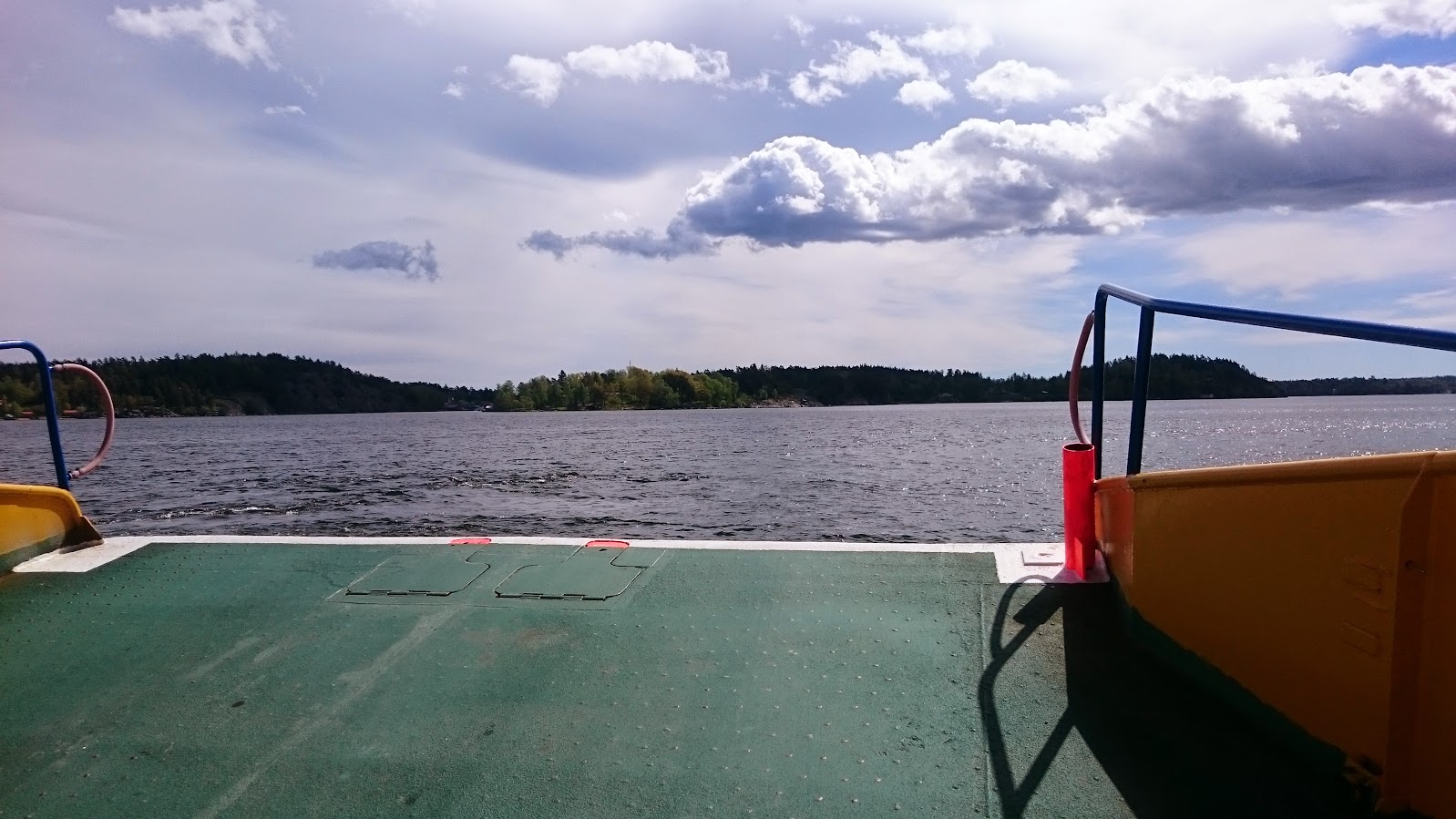 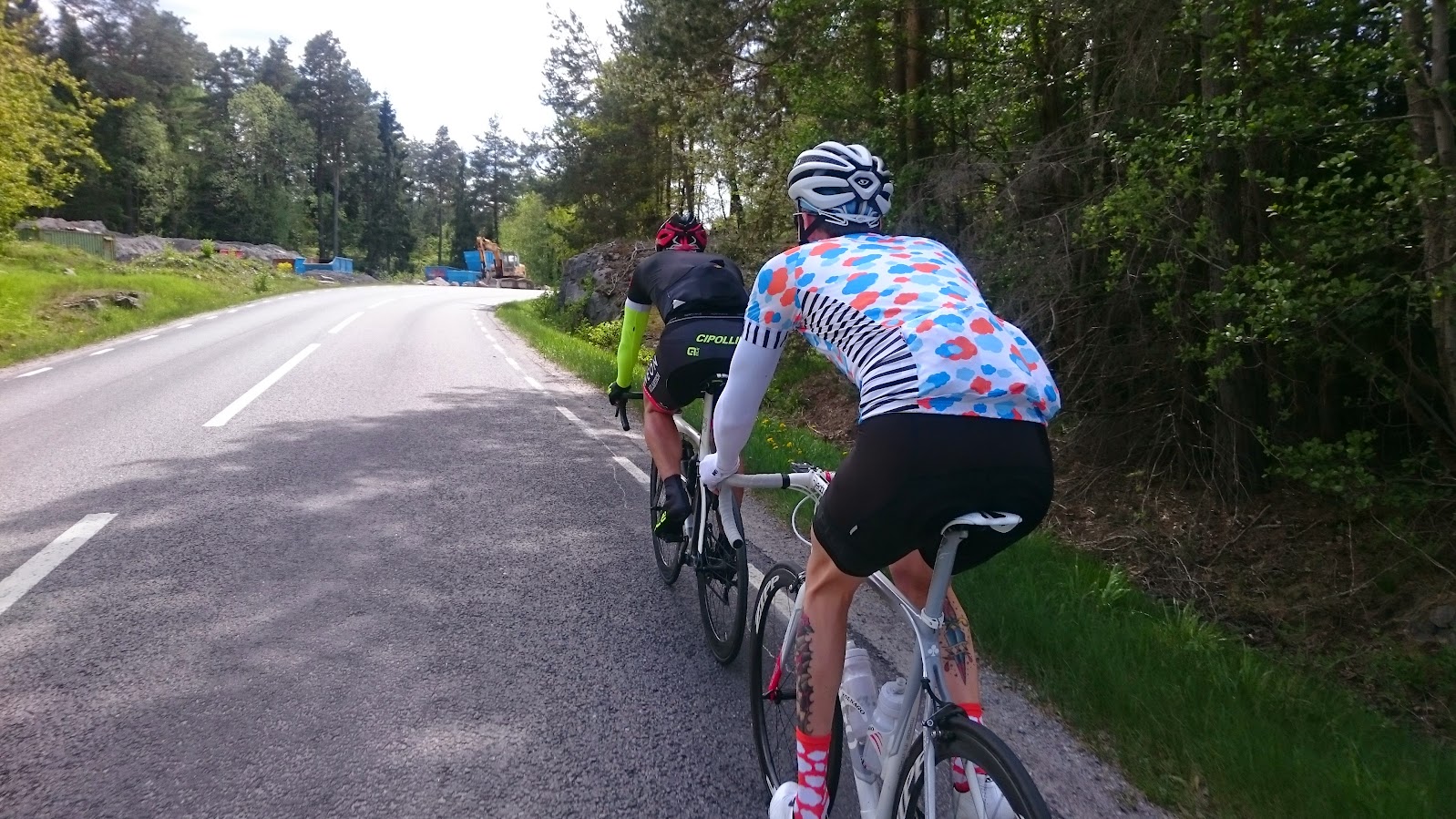 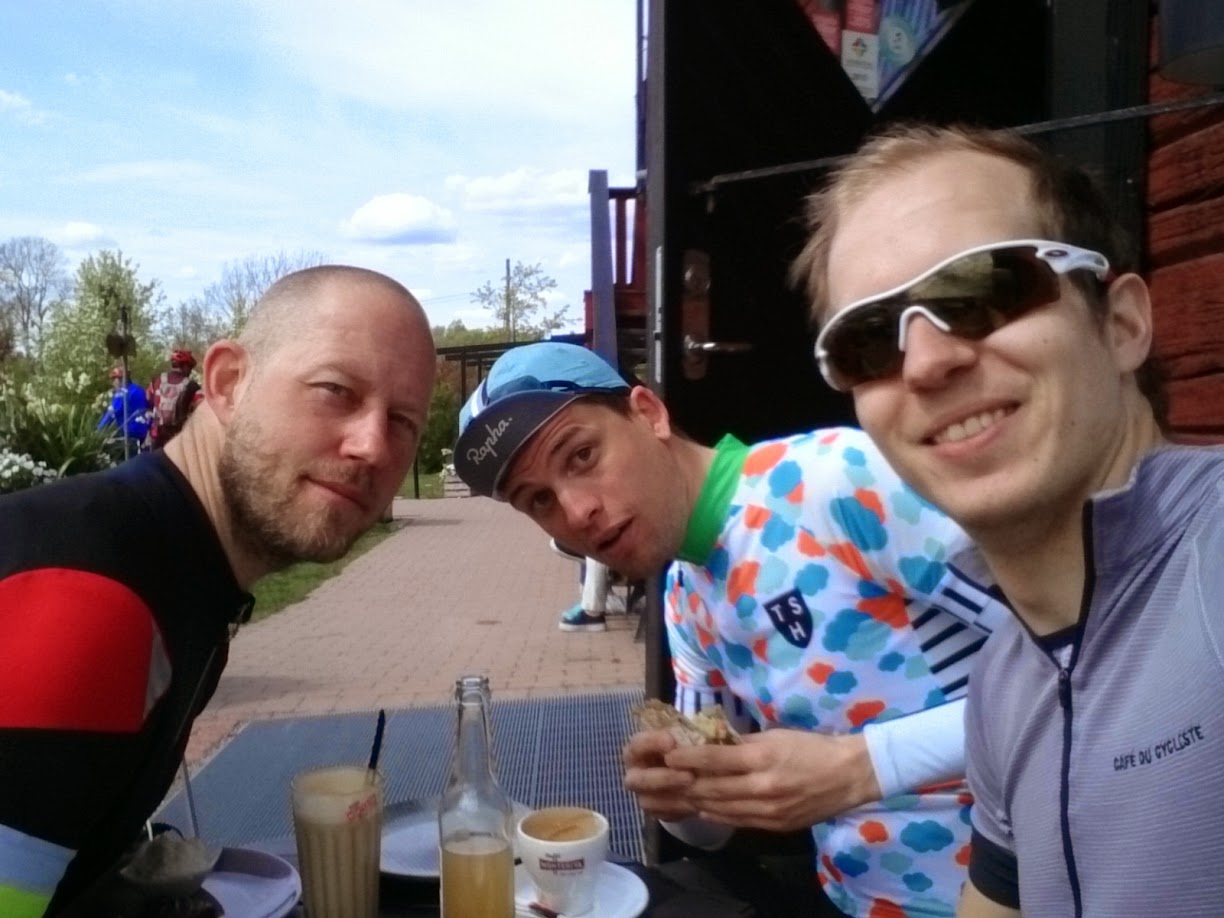 Awesome ride that felt better than I thought after the ride yesterday and as it was my 6th day in a row of training. No training tomorrow, just commuting 🙂

Map and stats of the 4h today: Movescount

Now I hope you’ve cycled today or watched the XCO World Cup. Otherwise there should be replays of it available now 🙂

Wiggle Honda is selling some bikes now on Ebay. Like Colnago C59 in my size 52 with Shamal tubulars. Or a smaller C59 with Super Record Eps and Bora 35. Sick bikes.

Colnago C59 Italia in 52 traditional, my size. Really nice with this black frame, white logos and then white bar tape and seat. Just a classic handlebar missing and maybe a Bora 35 or Hyperon wheels instead.

This is the time I wish I was rich, because this one is for sale from a guy that seems to have style. Add here: Weightweenies

His last bike, this Project Yellow Specialized Tarmac SL3 in this blogpost: SL3

First the Epic race. Beskidy MTB Trophy is said to be one of the worlds hardest stage races. And with this years mud it really seems true. But good views:

And women winner Åsa Erlandsson did a great effort!

And then it has been some gorgeous road racing in France/Switzerland today. First stage of Critérium du Dauphiné racing from Champery to Champery through Chatél where I passed once. Love to see racing on road I recognize and loved to see Team Europcar showing how to do it. David Veilleux attacked from the leader group and rode for him self in the end. Taking the climbers and point jersey as well as the leaders jersey. On superspeced Colnago C59 with Campagnolo Hyperon, Campagnolo Super Record EPS and Deda 35:

If you missed it, then you have to see the replay!

This is a nice end of a race, a small group in front of the peloton, watch the last two kilometers:

And Specialized-Lululemon has made a video about them, for us:

I also want to ride a nice roadbike in Italy, until I blog from that trip you can enjoy this taste:

Until that, watch some of my dream two nights ago:

I was totally sure that Thomas Voeckler won over Fredrik Kessiakoff on Tour de France because he had Campagnolo. But 2013 can be different because we will once again see Campagnolo on Astanabikes, this time hopefully without dope 🙂

Specialized Tarmac SL4, Campagnolo Super Record EPS and Corima wheels, hopefully Viva MMC for Kessiakoff when he passes Voeckler. Will be perfect and a bit more Campagnolo in the peloton again.

I dreamt about Campagnolo today too, out riding with Sram and thinking about style. Dark cold ride but nice to ride a bit in the morning. Map and Graph here: TrainingPeaks Tertnes

Colnago will be the bikes to cross the finish lines first next year too. Nathalie Schneitter signed a new 2 year contract with Colnago-Südtirol and they still have Thomas Voeckler and Eva Lechner. But not just those, they are getting company by the owner of this beauty:

Colnago K-Zero special Ferrari made for the F1driver Fernando Alonso. Colnago and Ferrari goes forward with their teamwork and it looks so gorgeous. Will show better pictures when I see them.

Until then there is a successful photographer called Emily Maye that knows how to take photos at a bike race. Watch here pictures from Louisville day 2 CXrace two days ago here: Emily Maye