The thing with Sumo’s is that they like to go faster and not thinking about easy rides. We planned for a <60min CX Peloton today (only made one of those) and my legs with 2 hard trainings yesterday didn’t feel so happy about this morning.

8(!) from Sumo Cycling today and 2 others doing the CX loop. We may not created Le Peloton but we are taking it over 😉 Eva sat off in a good pace and in the first climb where I usually get dropped by Per or Jonas I went into the front. Then the top was reached and we where some guys helping out keeping the pace really high. On Erstaviksvägen we where 5 guys and the pace was really good, felt superhard but I could keep up fine and then it came. An elk! Ran out on the road, in front of us and then into the forest again, was just too slow with my camera so just got it’s ass and the rest of the elk is behind the tree 😉 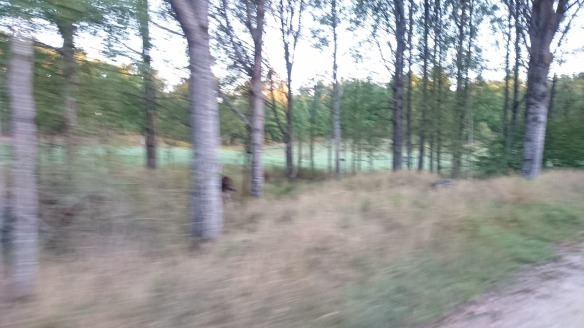 Instamoments you know. We saw many deers a bit later on the loop. Never seen so many animals riding before so was fun and something to talk about. On the way back in a long climb I went to the side and Fredrik rode up, he had a gap so I jumped on his wheel. While sitting there I thought of why I didn’t drop, it was hurting so much but I just kept on. In the end I went up in the front again and got free space down the a descent called ”Feel like Peter Sagan” before Emil came up and kept the pace high, with me on his wheel again. There you can talk about sitting too far in front, but while it was hard it felt good and not so far left.

Emil took a shortcut in the end on his mtb where I rode around and he gained a gap, Fredrik joined and passed me but he couldn’t brake enough in the 90° corner just after so I passed. Then easy down and full speed to the end. Got a PR with 31sec!

Maybe it was thanks to my socks?

Dry and dusty and really fast today. Awesome start of the CX Peloton season and happy with being able to go so fast on my Crux. Alu frame and low profile alu wheels doesn’t sound as fast as it was :p

Looking forward to real autumn and many more doing the CX loop. Remembering the good rides last year with me, Michael, Christian and Niklas chasing Jonas and Per and pushing each other 🙂 Laughing with 180 in heart rate is just super…

It’s the same every year, next year I will learn to not aim at cyclocross. Today I sold my cyclocross and got a bike that is made for my dreams.

Specialized Diverge Comp Carbon. Was supposed to be a Comp DSW but I work at the best store in the world, Specialized Concept Store Stockholm so it became a Comp Carbon 😉

Compared to my Crux this bike is 15mm shorter, 10mm lower and made for comfort on long bad roads without so much mud. It has Shimano 105 and it’s really smooth.

Normally it has alu parts but that’s no fun or cool so this is a bit rebuilt like my bikes tends to be. But more S-Works than usual:

Toupe saddle, 36/46 chainrings and of course a 40cm wide handlebar.

The bike got cool hipsterthings like a metal plate with the name on: 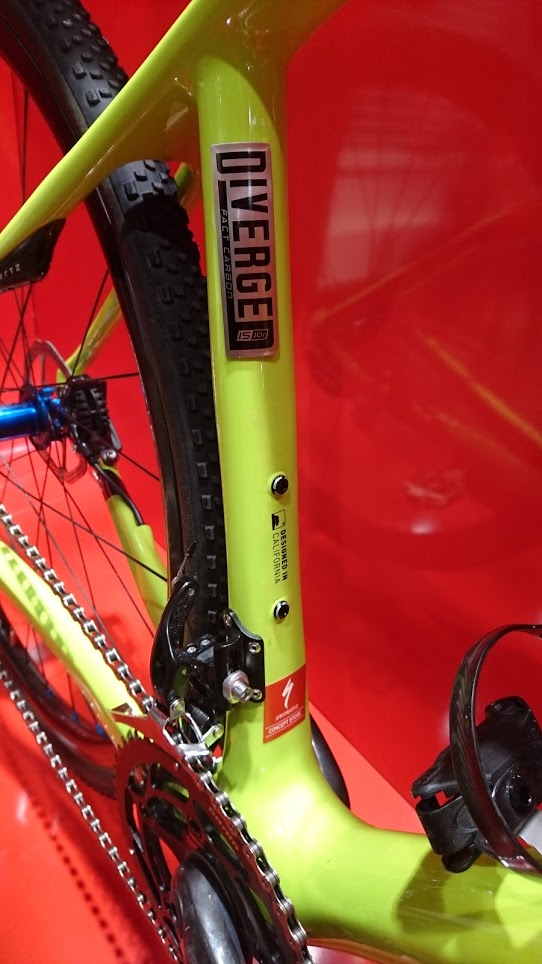 So how about the ww-ism on the bike then.

Think that is okey as it’s around 9kg out of the box without pedals and bottle cage.

Today I got the question of how long Le Peloton is riding, when the end of the season is. There is no end, just next ride.

But it differs in weather, in which riders that are coming and how many. Today we where around 15 (everyone not in the picture)

3 different groups, one fast, one not so fast and one CXgroup. I went with the not so fast group and had a good ride with a couple of hard times 😉 blaiming Christian in the middle of the picture in pink POChelmet of it 😉 But had fun and that was the purpose

Then I got breakfast: 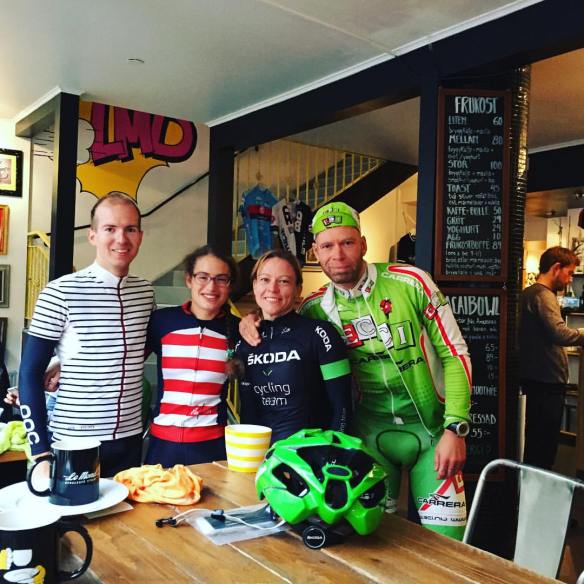 Then people seemed to have got jobs and things so everyone left early, and me too.

Ended up servicing my Candy pedals, like the way you can change the internals easy and get the feeling of a new pedal

When you change some parts you do it for the fit and the weightsaving is just a bonus. My Sram Rival crankset is really good (you want to buy?) but it’s also really heavy for being a single chainring BB30 crankset: 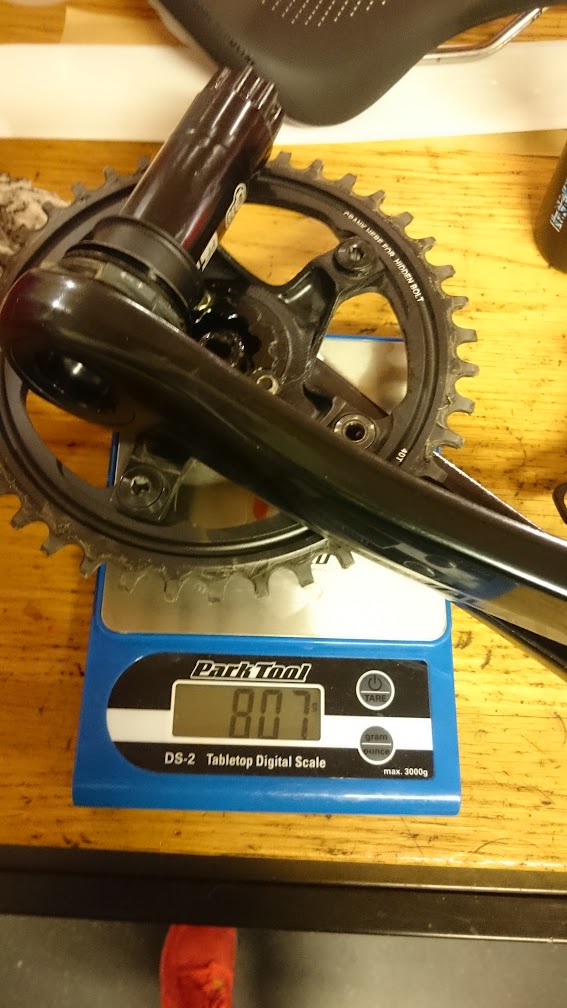 A S-Works crankset 172,5mm long (2,5mm longer than the Rival1) including the same chainring and chainringbolts: 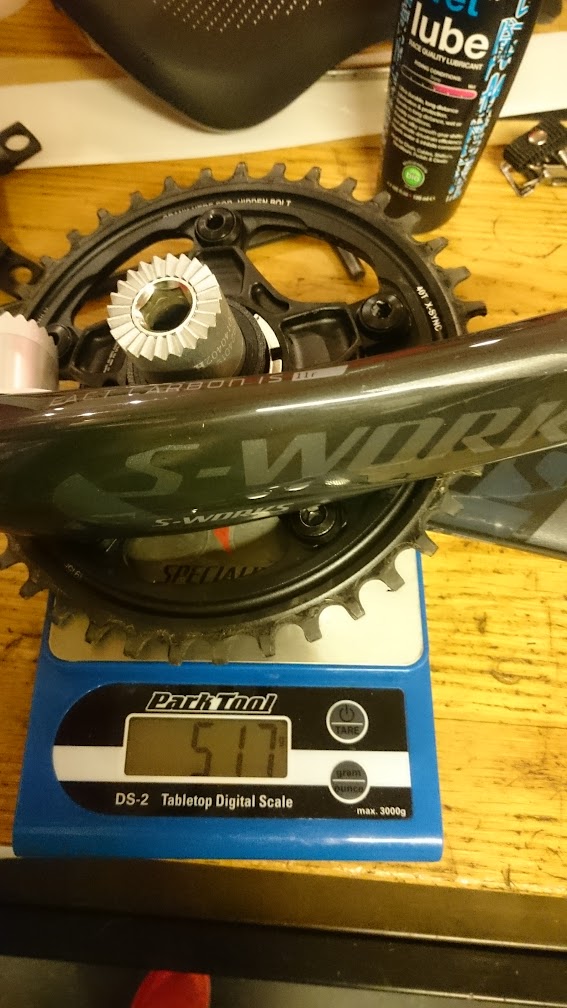 290g difference, A bigger weightsaving than measuring bikeweight without pedals 😉 But it’s not just light. It’s also the stiffest high-end crankset on the market according to Fairwheel Bikes 😀

I don’t know if I felt it or if it was placebo but it felt better riding home with it on. My Crux on the way down in weight: 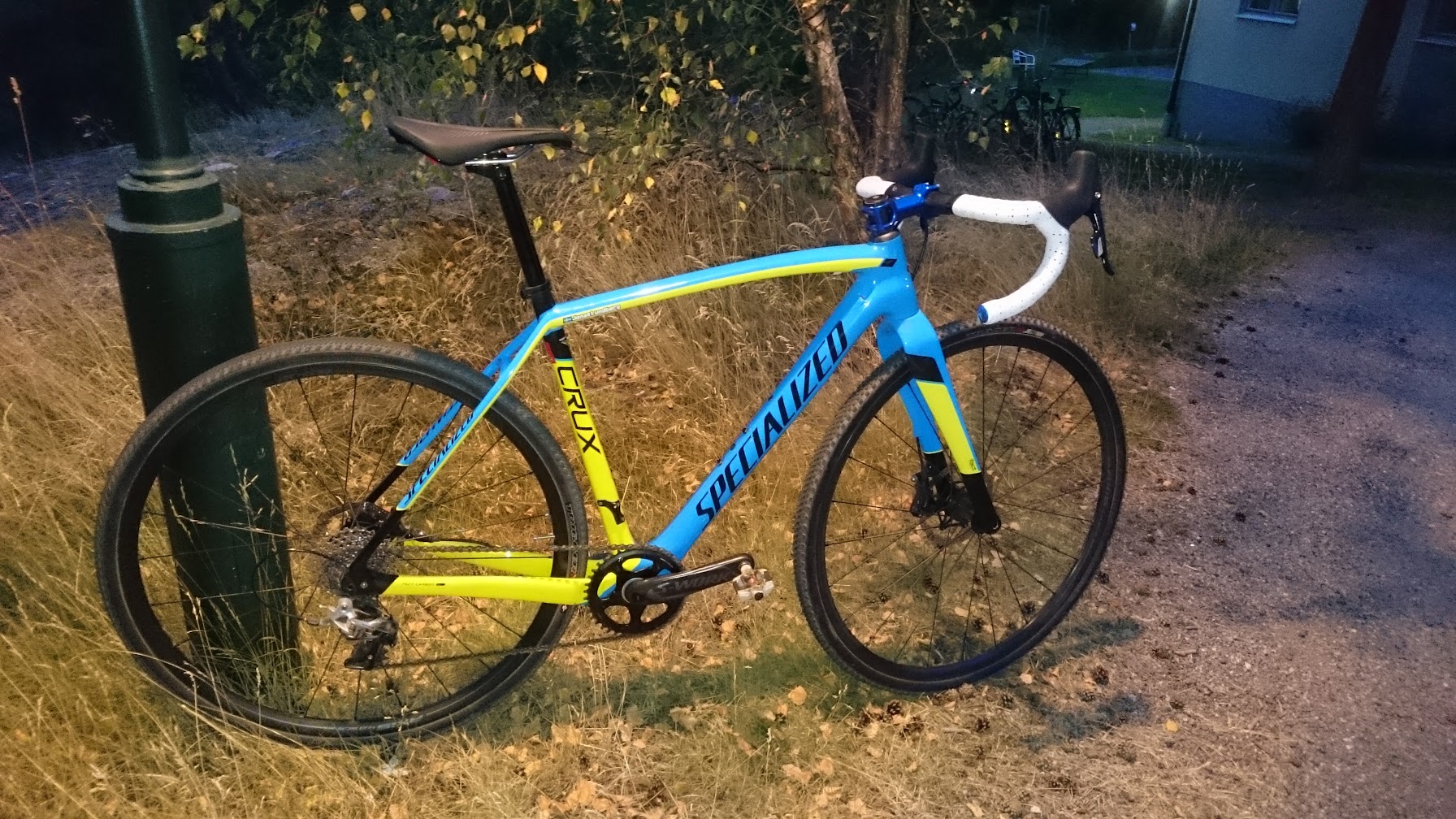 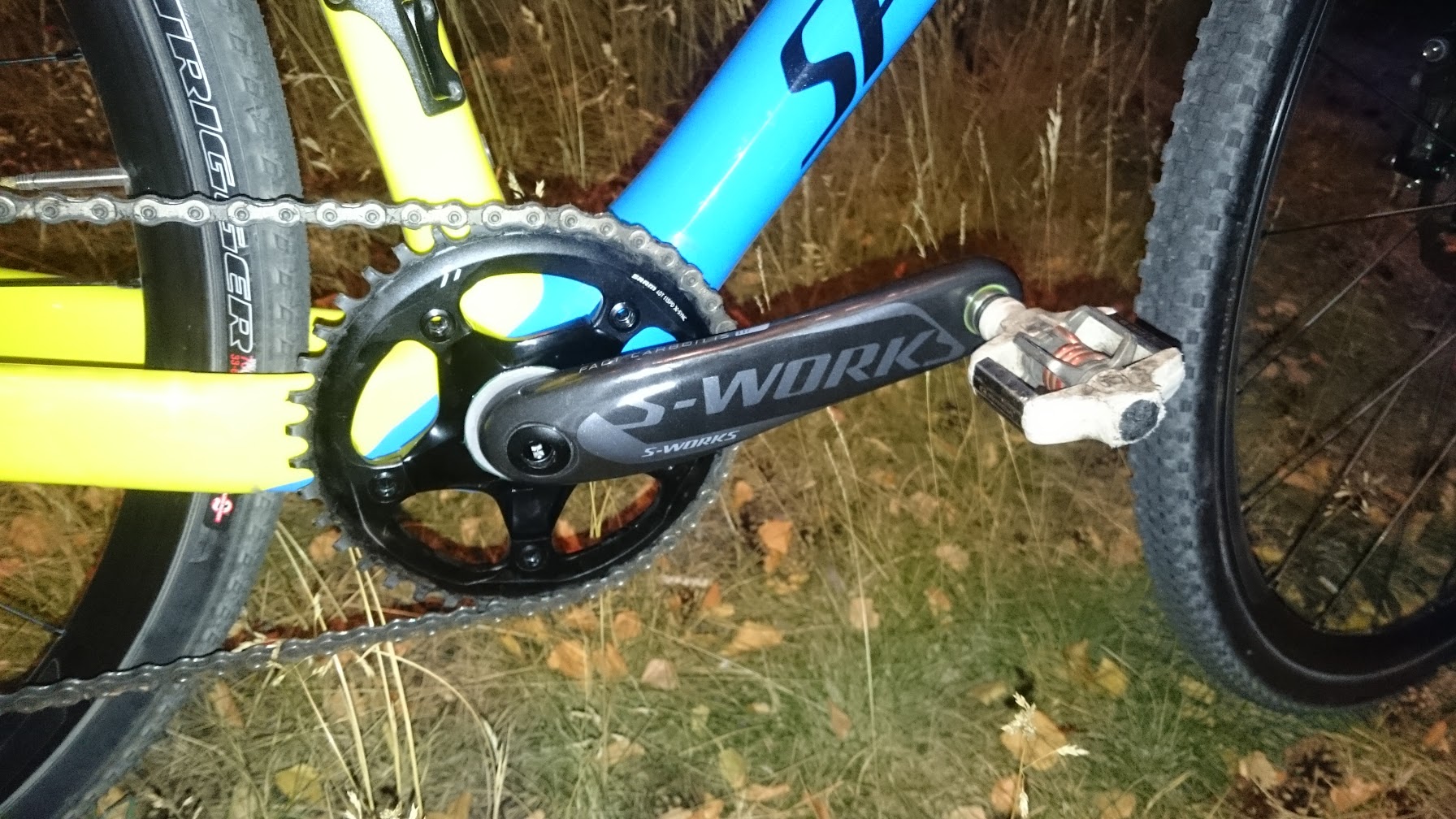 40t chainring. Ordered a 46 for the most epic trip this autumn 😀 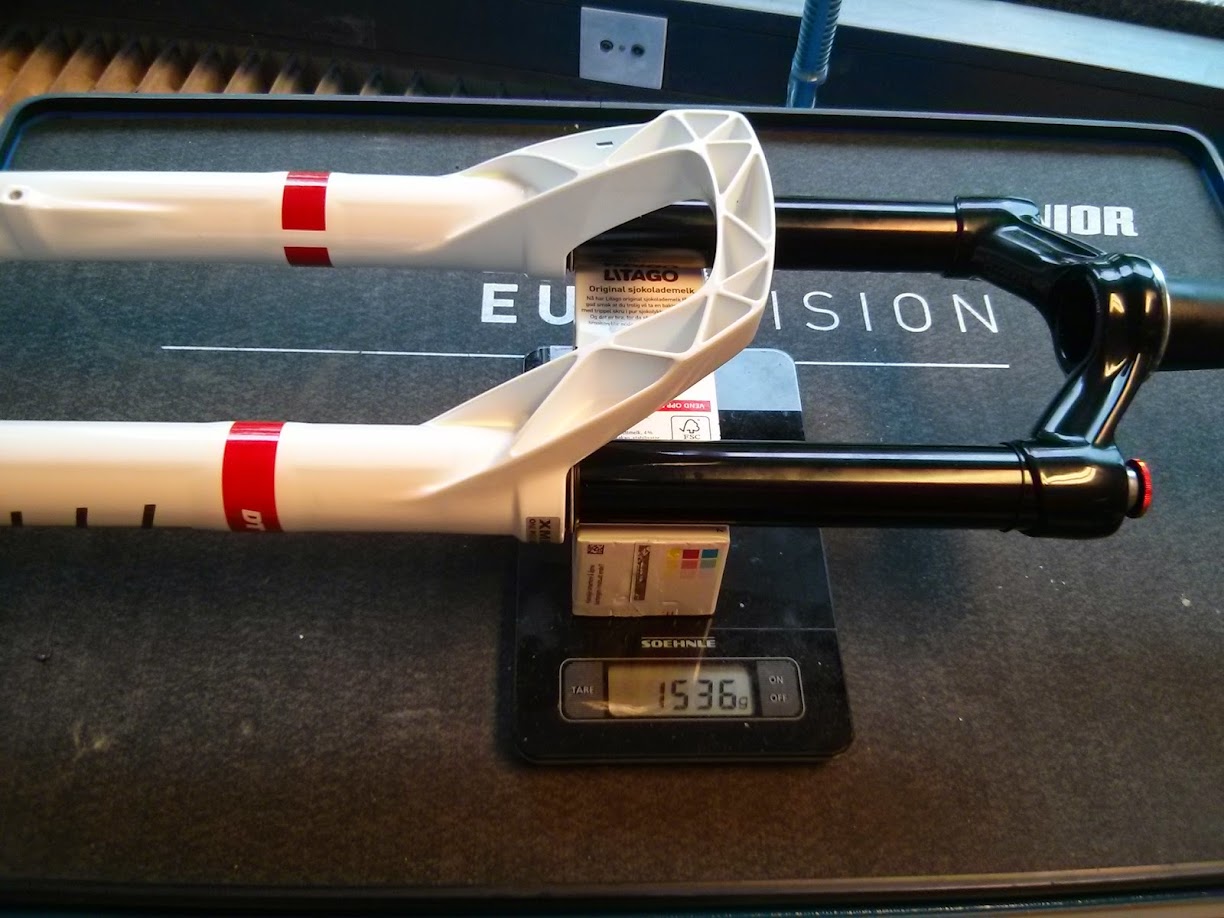 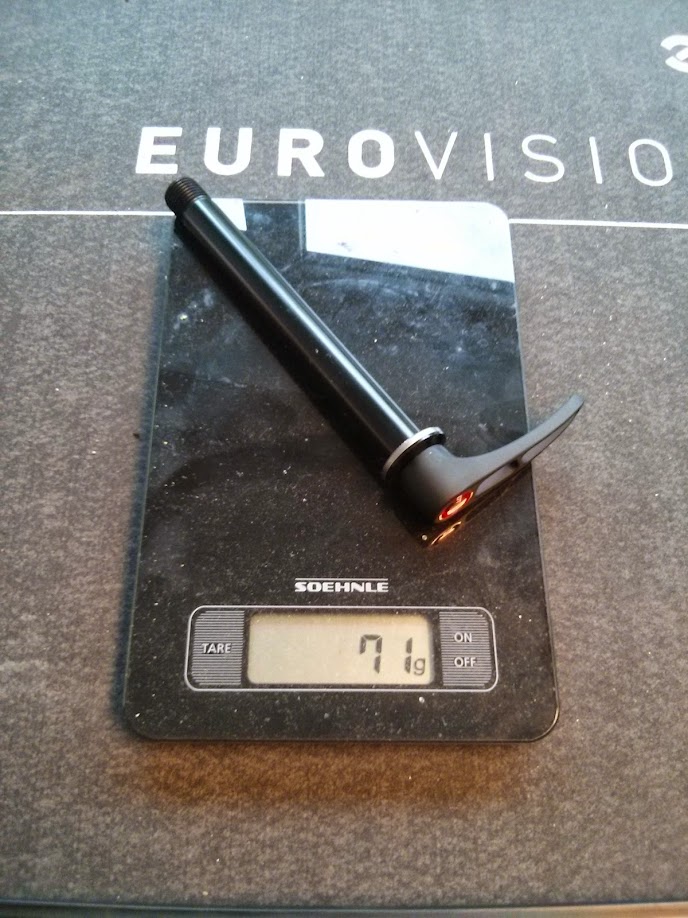 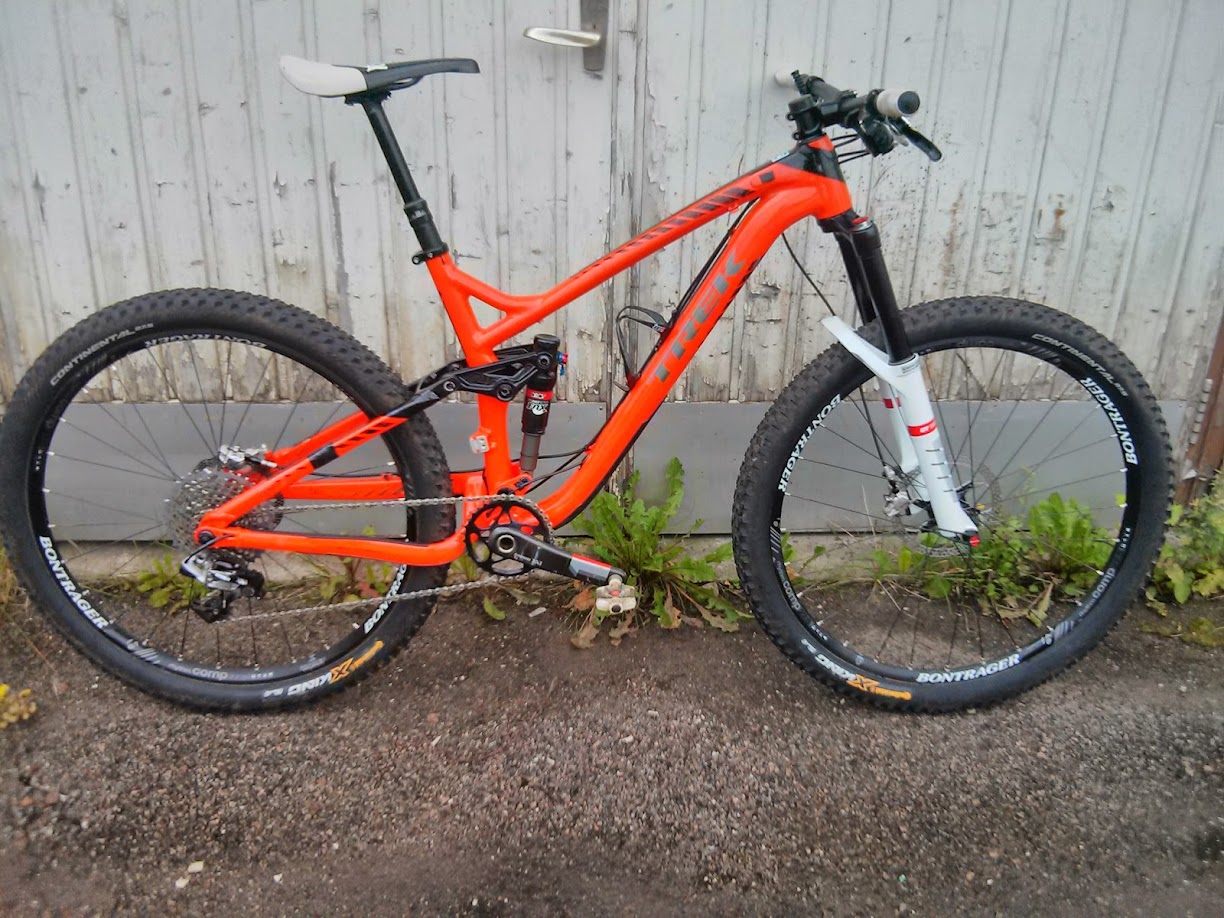 Rained all yesterday, rained all day today. The weather that keeps me in my sofa normally but when you have a bike standing here that should be very fun and three good guys out riding motivation is there 🙂

Rode out to Vardås and the bike felt a bit faster than my Liteville, mostly because of I’ve now ridden that road before and wheren’t new. Perfect timing as I caught Joachim on the last uphill. Walked up the steps and last part and met Erik on the way. Waited a bit and Peder came so 4 riders, 2 with Trek Remedy 🙂

Rode a sketchy downhill, felt a bit strange with the new bike and no dropper post, and slippery. On the way up again Erik was to strong or something so his freehub broke and became a fixie. End of ride for him 😦 Went up to the top again and after some discussions between the locals We headed down another way, nice singletrack. Singletracks here and there up and down all evening afterwards and some really flowy and nice tracks. Slippery but fun and as usual I really like 27,5″ wheels. Like I said to Peder it’s maybe not the fastest but funniest. Became like my friend John who always like to push and for that a 27,5″ is fun.

Really flowy bike but I think I had a bit to little air in my fork today or it is because the bike feels a little to short so I’m close to the front wheel. Revelation worked really well and rear suspension felt more active than on the Fuel EX 29er I’ve tried before. So not the bike that stopped me.

A picture on the locals on the last top: 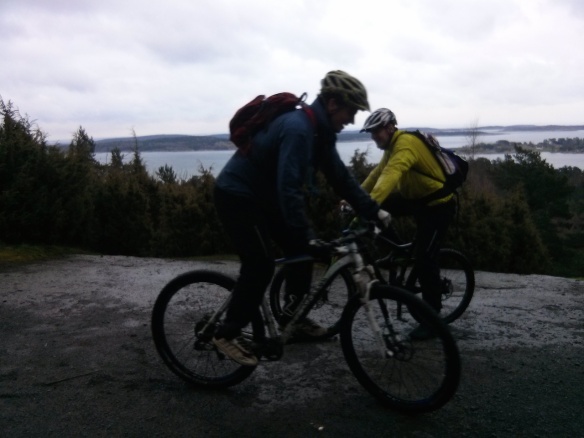 Flowy downhill from there where you could go fast and jump over rocks/roots, if you knew the track. 😀

Then back home again in headwind and it came some waterdrops from the sky in the end. A slippery but fun afternoon with a really fun 13,6kg bike looking like this:

Stats and map from today: Movescount

Not a very good day training today. Started with riding to work and half way half of my chainring disappeared, here what was left on the crank:

Had one chainringbolt that was a little loose that I thought of tightening at work but didn’t get that far (6-7min cityride). So what to do, all chainrings at home so tried the cool thing some people talk about. Rotor Q-Rings:

It’s heavier (double?) and has a teeth extra (39t) but looks pretty serious. And felt the difference directly when pedaling, in a good way. Was supposed to ride with two friends today but as the clouds have come back and the ground got wet again they didn’t feel that good 😦 Maybe not because of the weather as we rode together last monday when it was raining a lot but but.

Wasn’t that motivated and didn’t had the legs to train seriously either so rode for a short ride up Munkebotn, down on other side and around Eidsvågsneset putting some extra power up the easy climb in Eidsvåg. Felt nice with Rotor rings, but not that good with 2bar in the my tires and riding on asphalt 😉 Map & Graph here: link

If you want to buy Rotor Q-Rings we now got a great offer at the store I’m working at, half price on what we have in stock: Sykkelsenteret