I joined a cafécycling ride from Le Mond today with Emil and some other fast cyclists. Me and Emil have been riding lots of times together, last time he dragged me around Race Across Skåne. I’m used to be in the front of these rides and can attack Emil on uphills and downhills if I want.

Today I started with cake at Le Mond to be extra fast downhill:

We had the best autumn weather there is, love Sweden: 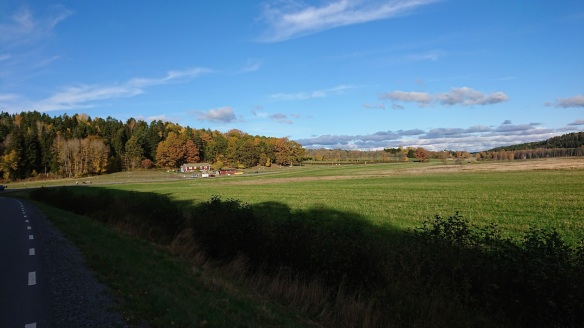 And sure I was in the front a bit but mostly like this: 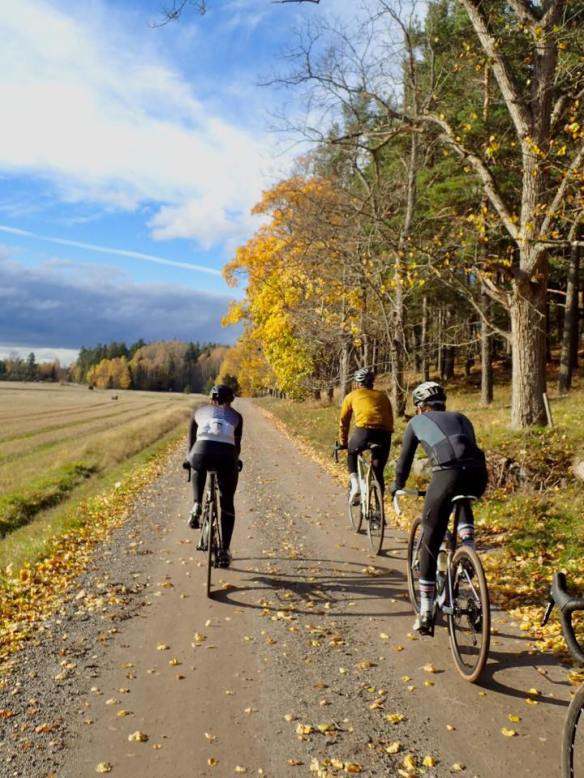 The feeling when you try to push on but it doesn’t work, or when you attack on a climb and the heart rate goes like a rocket and you drop again. Emil says he doesn’t got any top but sure his tempo is hard enough to just hang on to. 😉

Except I’m in bad shape and not used to being the one sitting at the back trying to hold on sometimes it was a magic ride. Mostly asphalt but some nice gravel too, and some tricky:

And I’m still taking it a bit easy and not want to crash again so soon. Takes time to be able to ride as fast as the bike can go in a group, on gravel or in the descents. 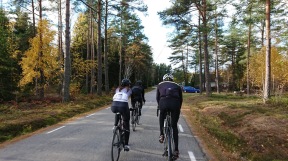 It’s all a mindgame riding a bike. To dare go fast, to be able to get a bit loose on gravel or on a singletrack. And not giving up. To think you’re good enough to ride with the fast people and to think that the suffering ends just when you get home again.

To help my mindgame today I had great friends (new and old), favorite weather and cool socks (cool but warm as they are merino): 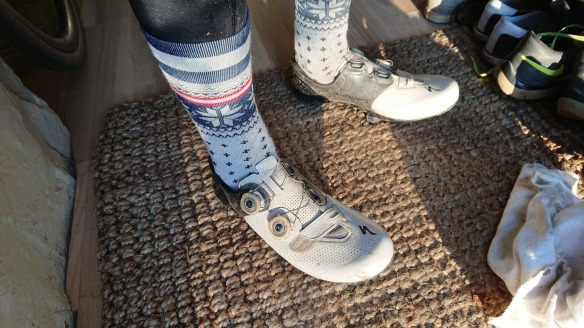 If you think text doesn’t mean anything without numbers, here is the numbers: Strava 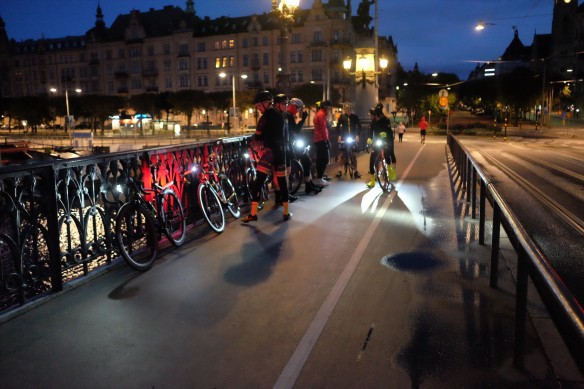 An injury can end up with new feelings. Like this morning when I woke up by the alarm at 5.00 and was happy to go out and ride my bike in the darkness before everyone even thought of breakfast.

Hidden on the picture behing Klas in the red jacket, maybe you can see the green rear end of my helmet 😉

Got dropped pretty fast which I expected and tried to do a long lap as fast I could. Wasn’t fast but felt like I could push the small Watts all the way. Then the light came and while the others did 3 fast lap I did 2 slow: 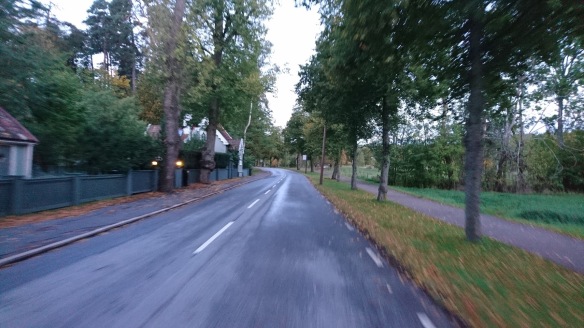 It ended up as the longest ride since 2nd August. Time to push limits and get my leg back to usual 😀 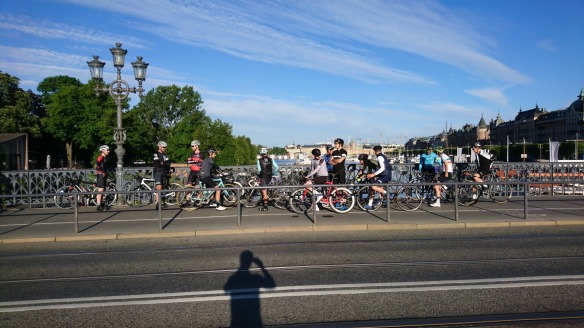 A bit of a strange week this week. Maybe the first one 2017 without any Le Peloton. To tired on Wednesday and am trying to not ride too much now when Vätternrundan is getting close.

Did Morningspins yesterday with really bad legs yesterday, was dead last. Was thinking if I should do Le Peloton or Morningspins today. Thought Le Peloton would be a little hard for a long time while Morningspins is more about speed but short distance and time to rest in between. Great to get some speed for Sundays Lida Loop XCM 🙂

A lot of riders today as you can see

Some very fast, some like me and more or less a cool group of riders 🙂 The first loop got was really fast and I was dropped, but not as early as yesterday. Yesterdays KOM got smashed too so says a bit. The 2nd lap wasn’t as fast which was really good for me. Found some legs and was able to hang on and make a new PR 😀

3rd lap started as an Instalap:

But then HRT attacked and some people followed, went fast again and I missed the train a bit. No worries as I was happy with the mornings training. Got some speed, felt a little bit fast and built some confidence 🙂 Great to have a positive feeling when it’s racetime.

Me and Peter matched in our Danger Speedsuits too 😀 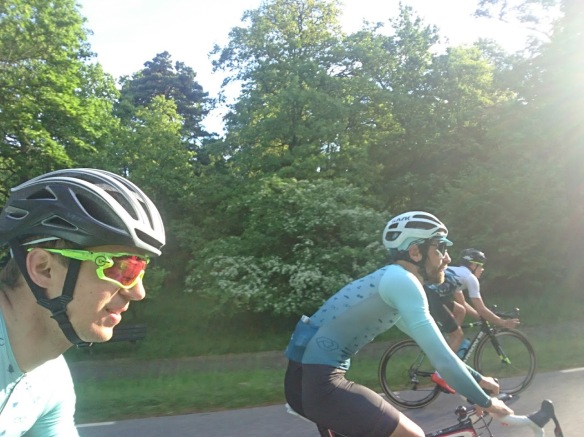 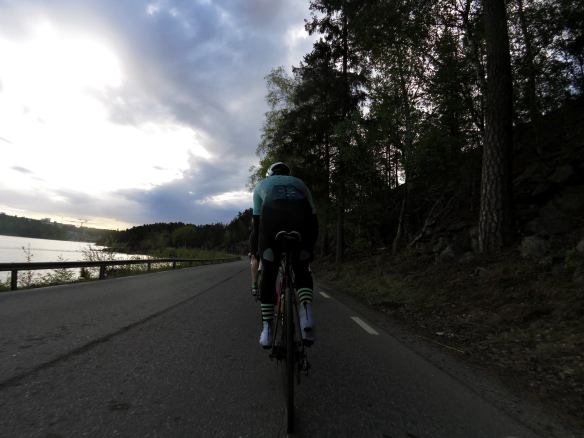 Started yesterday, Tuesday with riding fast out to an island and back.

Then after work me and Patrik rode out with our fast colleague Oliwer to Djursholm to cheer on him and watch the Crit racing. Awesome racing on a nice course (yes I tried it) 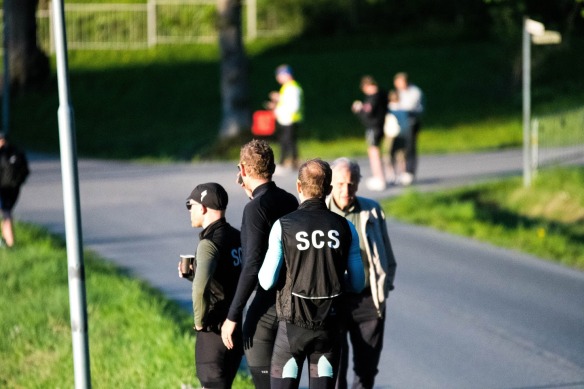 SCS in the sun, by Jonas Rodny 🙂

The Men racing (women just on my Insta story):

No victory for SCS CK or Sumo but well done and fun to see. It’s getting better and better for Oliwer too which is great to see. And the power of Emil a.k.a. The Speed Lunatic is awesome 😀

Home and got too little sleep before this mornings Le Peloton: 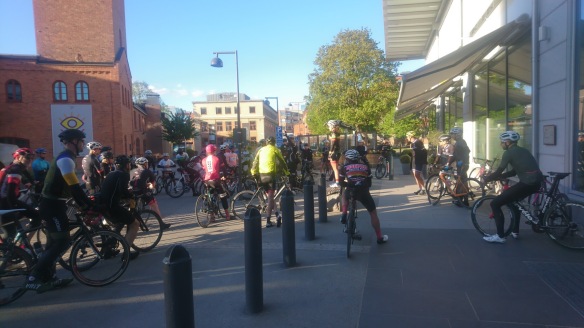 Tried to dope with the Sumo jersey:

It worked a little in the beginning than my left leg got stiff again. Turned around in Fisksätra and rode easy spinning back. Caught by the first group again, took a turn up Hellas and then just tried to hang on. A successful fail I would say about that ride, want to go with them all the way and take more turns. Want to push harder and get the heart work faster like I know it can… 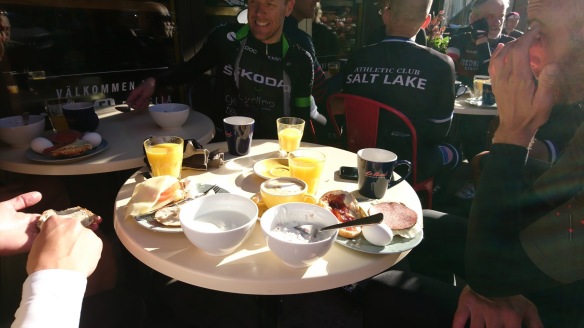 Instead of put the bikes outside and sit inside we did the opposite. Some with better parkings than others:

You know riding in almost rain in the middle of nowhere and it got to this magic misery you only see on Rapha videos? 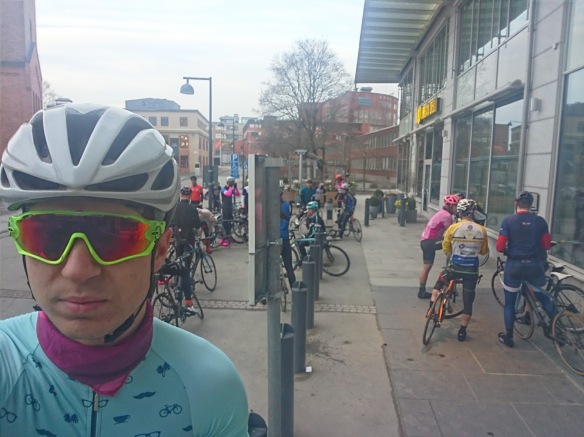 Today it started like this. The warm up got fast as we had tailwind and it felt like I had more control than last time trying to ride with the fast guys. Survived up to Fisksätra but when we turned right my left leg died and I got dropped big time. Christian got up to me and while not getting back to the main group we rode alone in a quiet tempo back to Duvnäs. Took the shortcut over Kranglans väg.

At Hästhagen we thought if we where ahead or behind the main group. Rode as good as we could and got company by one more guy. Took the shortcut in Älta too as I thought we where behind (wasn’t I saw on Strava’s Flyby). Our company left for home and we passed a new guy who couldn’t keep up. Caught Johanna in the end and rode together to Le Mond.

Got a bit up but will hopefully get some order on my leg after a massage I’ve booked for Tuesday, looking forward 🙂 Want to use the hashtag #lookprogofast sometime 😉 Just went the pro looking today with a scarf like Alessandro De Marchi had on Fleche Wallone 🙂 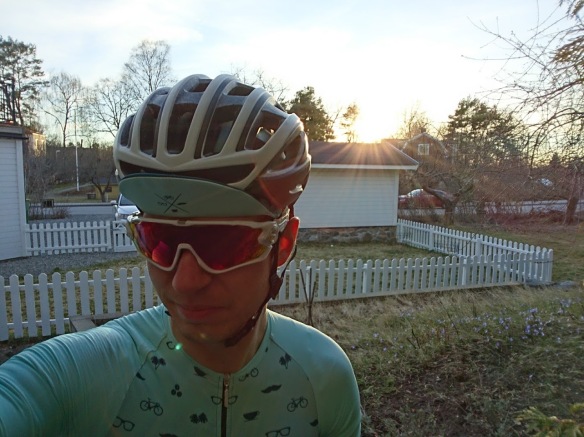 And yesterday my new stem arrived home (from work). Used a 3T Arx II last year with a stupid T30 torx at the back, didn’t like it and sold it after the season. But wanted a clean 90mm -17° stem and while Zipp Service Course SL may look good it’s a bit pricey. So found the cheapest stem that met my criterias: 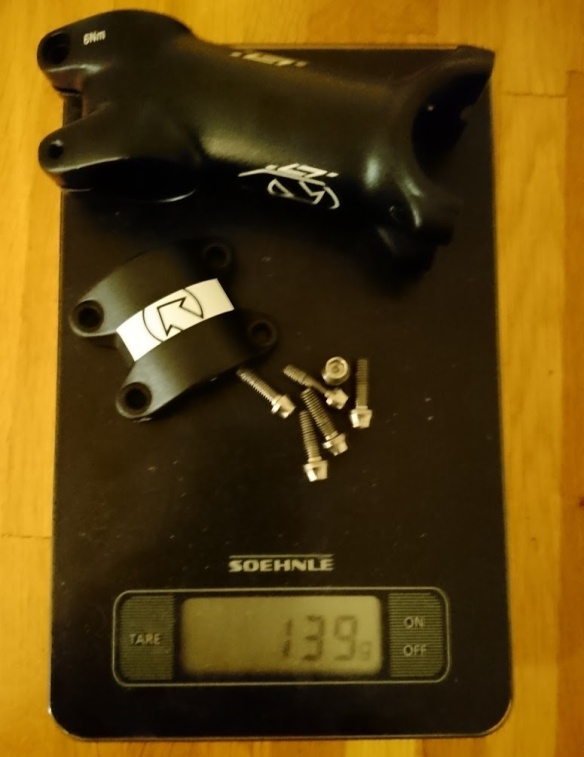 Pro LT 😉 Looked at the more expensive Pro stems but none was available in the right size. And this does its job perfect, felt good testing it today 🙂 We’ll see how long I have it until I upgrade to an Extralite or something like that…

I can confess that if you can ride later, then it’s easy too sleep a little bit extra and skip Le Peloton at 6.00 😉

5th October was my last Peloton and it felt like ages ago, understand why people think it’s hard to wake up so early. You just have to make it a standard and it won’t feel as early as if you just do it sometimes. 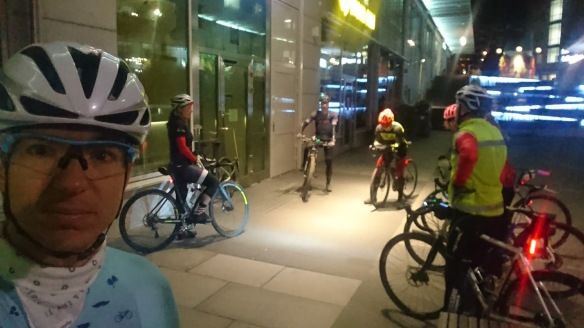 Not as many today but all on cx/mtb so the roadseason seems to be ended 🙂 As I’m not as fast as I want at the moment I tried to be faster with my aero Evade, a Danger speedsuit I got a couple of days ago and aero handlebar…

It didn’t work and I got dropped on the first flat section from the 1st group. Thought of trying one of the shorter loops but I got closer and closer to Karl who was riding the loop for the first time. Caught him just before Erstaviksvägen and same time as my light blinked and indicated 25% left. We rode the golf course loop together but dropped a bit at the long climb back on Erstaviksvägen. And then my light died. It became really dark so was extra happy when we met Claes who dropped his bottle and had turned around to get it.

Rode in front of his light all the way to the adventure course happy to see a bit. Down the Feel like Peter Sagan descend it was a bit scary without a light and just afterwards I rode off the road a bit as I didn’t see it. No crash as it was grass there. Claes got a gap but now it was a bit lighter and I could chase him without making any stupid things and caught him in the end 😀