Hopefully no one missed that it’s Olympic times in Rio now. Men’s roadrace yesterday with many crashes and almost a Scandinavian victory with Jakob Fuglsang if Greg van Avermaet wouldn’t have been so good 😉

Today it was time for the women and what I said the Netherlands could do happened. Annemiek van Vleuten attacked. But on the last climb giving her great chances to win as she seemed to be in her life’s best shape. 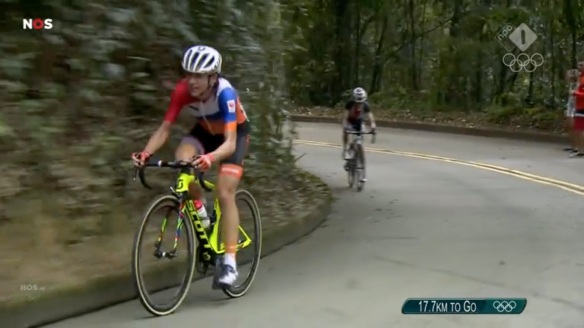 Mara Abbot got up to her and they rode the end of the climb together. I knew Abbot wasn’t such a good descender so my big hopes was as always for van Vleuten. She rode away from Abbot. It all seemed perfect until a corner where she lost her rear wheel. Just after she got too much grip on her front wheel while breaking so she flew over the bike landed on the side of the road:

Crashing like Nibali yesterday but in bigger lead and the crash seemed horrible as she layed there and didn’t move. Now it says she is ”ok” but the Time Trial seemed to be lost and wonder if she have even the smallest chance to heal up until the Worlds?

So Abbot in the lead and was very close to win. Behind her Anna van der Breggen, Elisa Longo Borghini and Emma Johansson chased. The rode so well they caught Abbot a couple of hundred meters before the finish. Borghini did most of the job in the end so she ended 3rd. van der Breggen started the spring and Johansson tried to pass but didn’t have the speed or time so ended 2nd like in Beijing. And just like Fuglsang.

Anna van der Breggen won a well deserved victory and nice to see a great rider who’s always in the top win (almost as nice as if Johansson would have won). 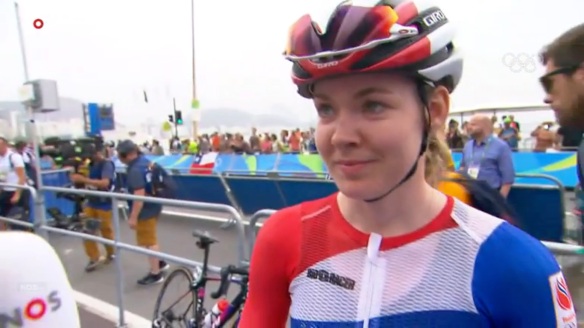 So while the Netherlands lost their maybe best rider of the day they where happy winning 2 Olympics in a row. Here celebrating with Marianne Vos who won in London:

Sweden may not be the biggest cycling country but we got one of the best cyclists in the world and today she showed how good she is. Emma Johansson dropped everyone and got over 4min to the 7 chasers in the group behind. Emma Johansson is on such level like Zlatan Ibrahimovic is. Absolute top both but only one has the media attention.

Anyway, it was a hard race today and already after first (of 10) laps the bunch was in small groups. After a couple of laps it looked like this: 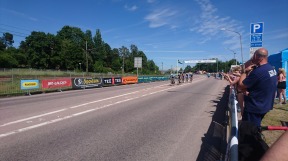 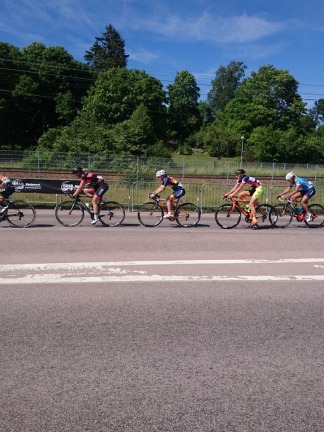 The first group with Emma Johansson, Sara Penton, Emilia Fahlin, Sara Mustonen, Sara Olsson and a couple of more went hard and made the others suffer. Specially on the pavé section in the middle of Västerås:

Emma deserves a bigger picture, also a good one but I only got this:

Where 44 riders to start but only 11 finished as the other where too far behind. The last rider who finished after having 2 rear punctures but never stopped chasing was my Sumocycling teammate Eva Lindskog. Rode real Sumostyle and did a great first Swedish Championship: 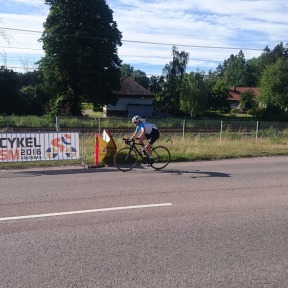 If you of some reason missed this, here are the highlights from the 5 stage race in U.K. last week:

Yesterday was the Fleche Wallone day and Rabo-Liv wanted to do as last year, take the win with Anna van der Breggen. Didn’t find a good replay but here are some highlights:

But Boels-Dolmans is a great team even on social media so they shared a link to the last 10km of the last stage today:

A great race which even was livestreamed 🙂 Missed some work from Elisa Longo Borghini for Emma Johansson but otherwise great race.

Some races are bigger than others. Now it is a stagerace and it seems to go pretty good for Emma Johansson. First it was a prologue then stage 1:

The biggest spring classic yesterday and what a race. Watch the final kilometers here:

If you missed it, here are some highlights:

Awesome racing today but no livestream 😦 It’s sad but here is the highlights from todays Women World Tour race in Italy:

And the honest version of Wiggle-High5. Not the best day for them but a day to learn from and getting better: