This past weekend I talked with Isabelle about training and about the difference in our lives. We both love cycling but she always ride with a purpose. I don’t, I just ride because I like it. She is faster than me but that’s not what matters for me now.

I love racing, love to be a part of a cycling club that work for racing even though I’m not so active, love to watch and follow races and see people develop.

This week I had a plan with my riding as I’m riding 300km Vätternrundan on Saturday which is the biggest cycling thing in Sweden with over 20000 starters and many Sub groups all from 15h down to under 7h. It’s not a race but the biggest goal in many cyclists life.

My plan was to ride Älgö Deluxe this morning, Le Peloton tomorrow and then rest except just transporting myself to work and home. So started this day with Älgö Deluxe:

Found a great picture of the different clubs. Stockholm CK, CK Valhall, Fredrikshof and SUMO riders all together:

Felt easy on the way there and felt good sitting on wheel. But when I went in front my heart rate went to the sky without any legpower. Got dropped just before Älgö together with Jürg and we rode the rest together. Seems like the other ones went fast with KOM’s and such things. I had an average of 35km/h so maybe I did have some legpower. Stats: Strava

So after work my plan was just to go home. Then it changed to go to Storkällan GP with Magnus and Simon. Rode there and then I got a tempting message and changed my mind. Instead of watch the race there alone I went for an easy spin to Älgö with the most beautiful riders of Rocket Racing Team:

There is a Challenge on Strava to ride half of Tour de France while they race it. I’m ranked 58 after today 🙂 Enjoying it as long as it lasts as I won’t manage to complete it or keep the place.

It all started at 8. Met up with 5 nice guys close to the Globe here in Stockholm. The plan was a 200km ride on nice roads southwest of Stockholm. Like the last week to Mariefred but better and with riding home instead of a ferry. 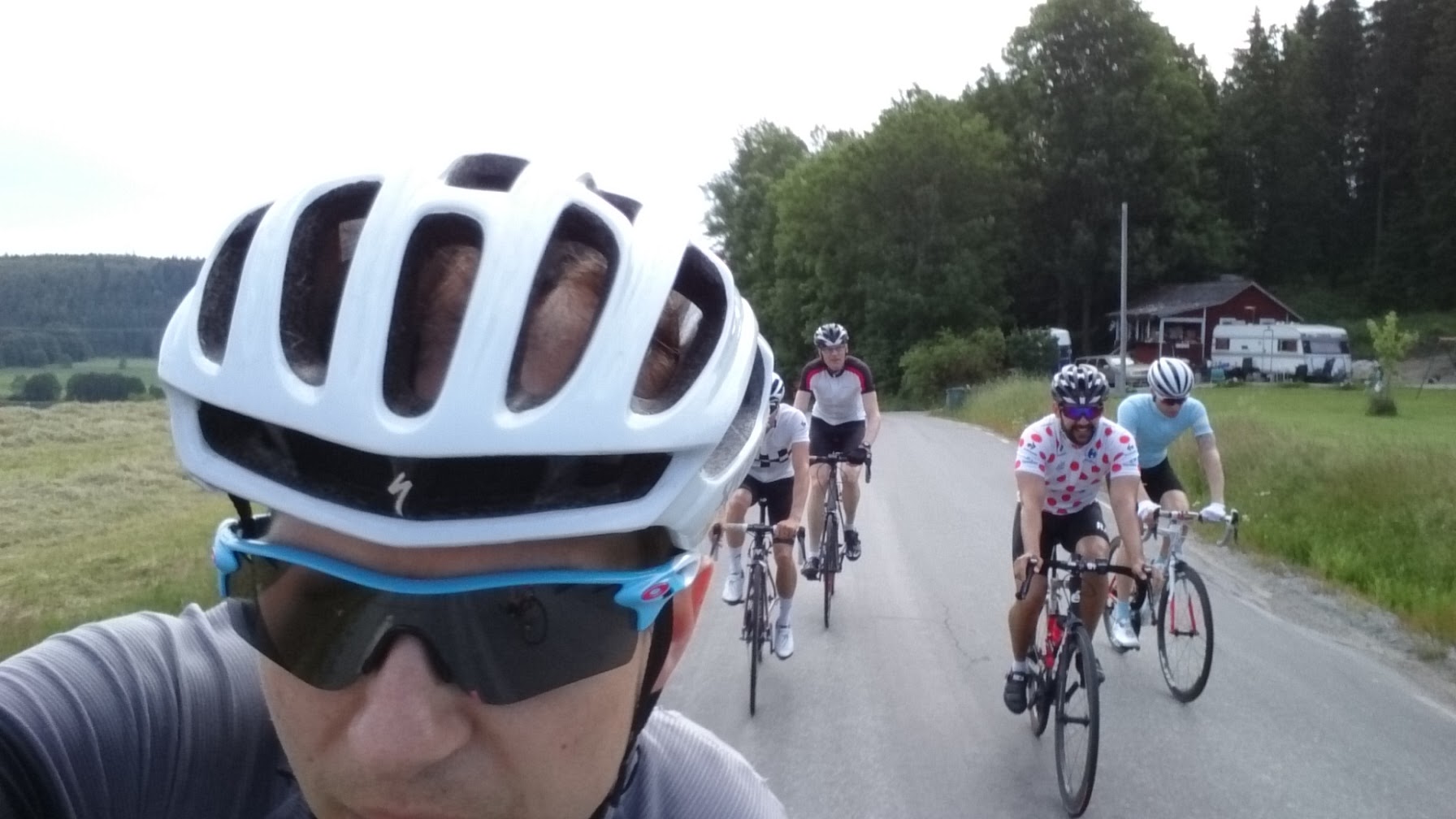 With Peter M in front: 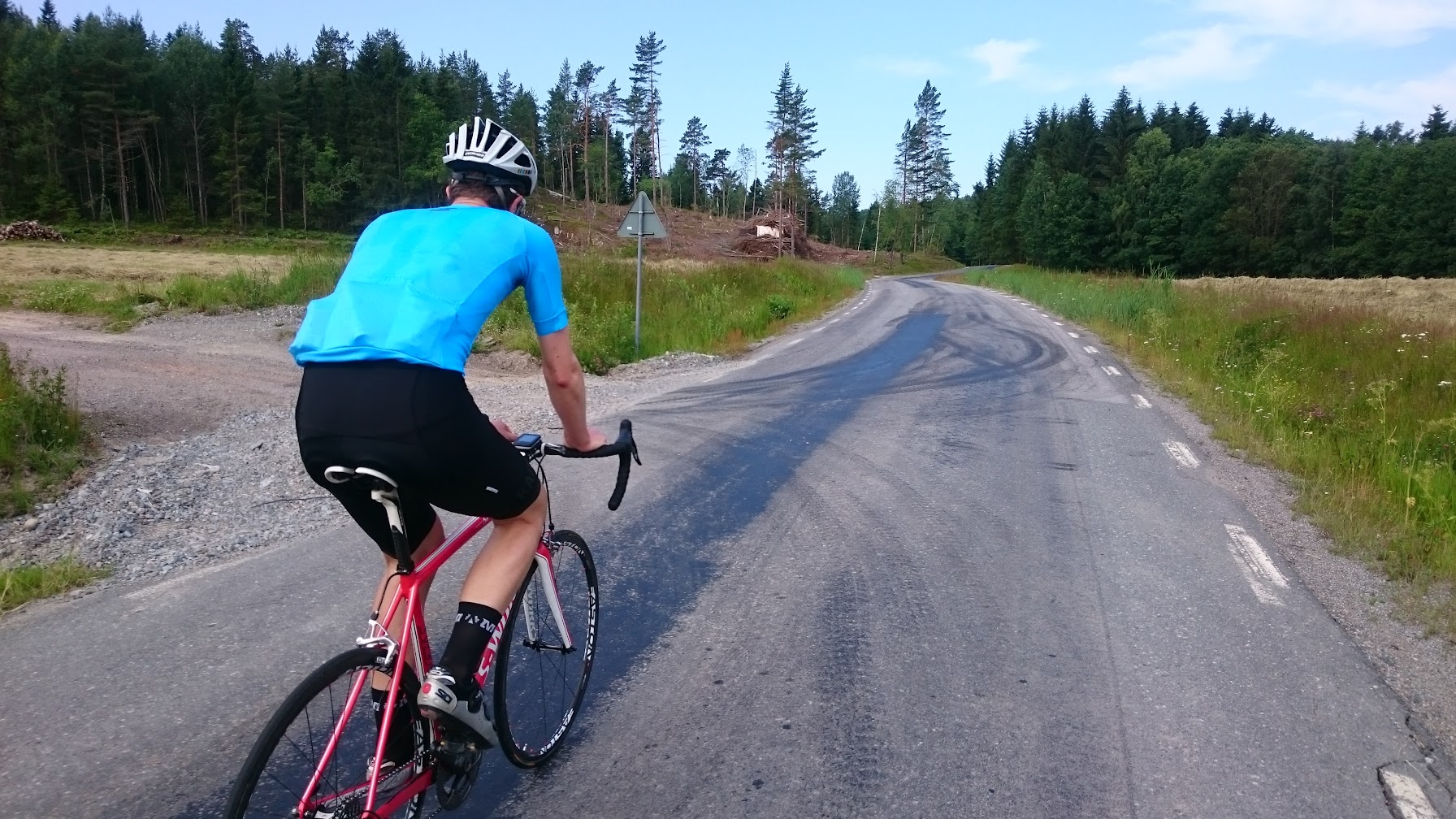 Waited for a small ferry at Skanssundet: 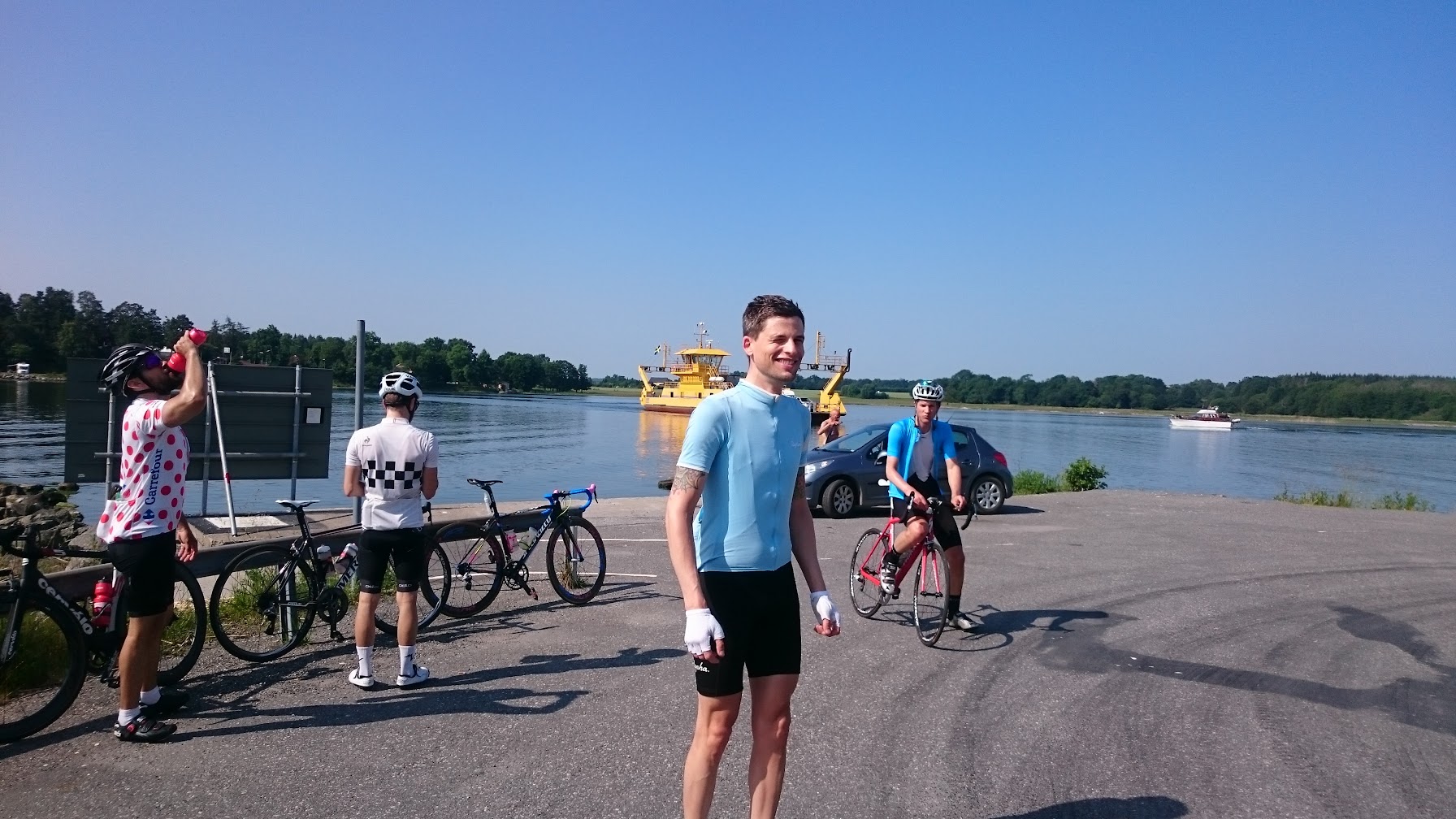 Me today after almost 2h: 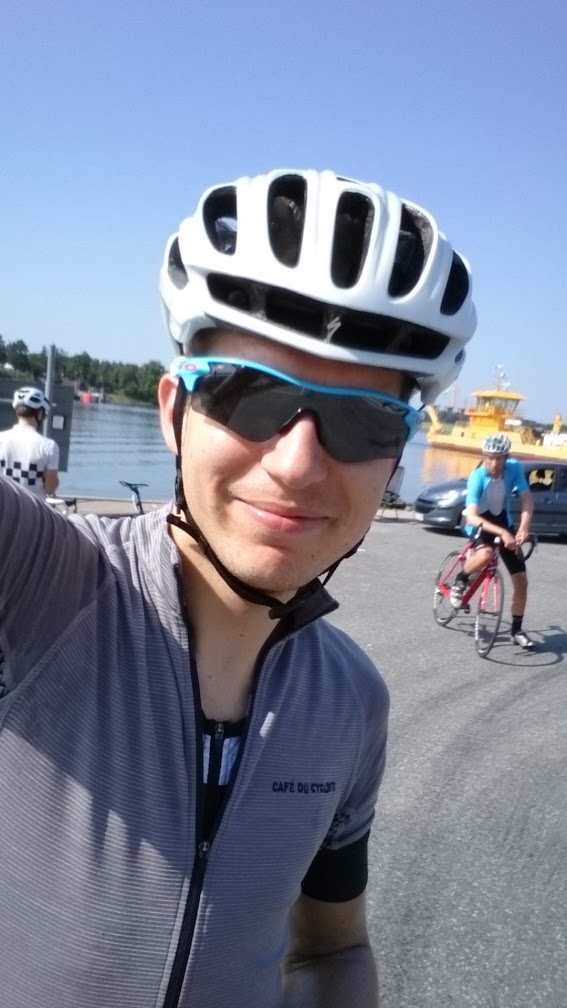 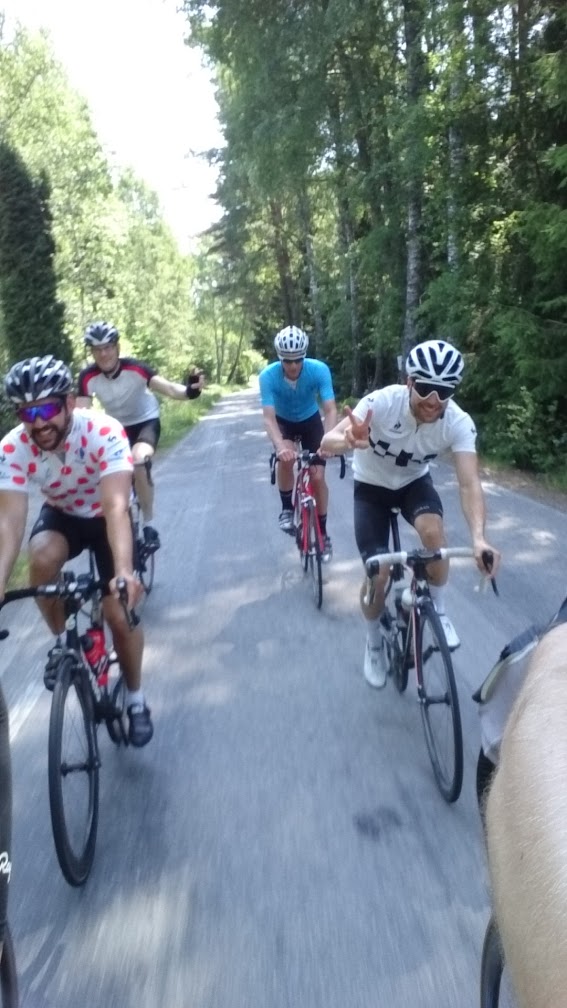 A new small road in the middle of nowhere, much better than last weeks ride 🙂 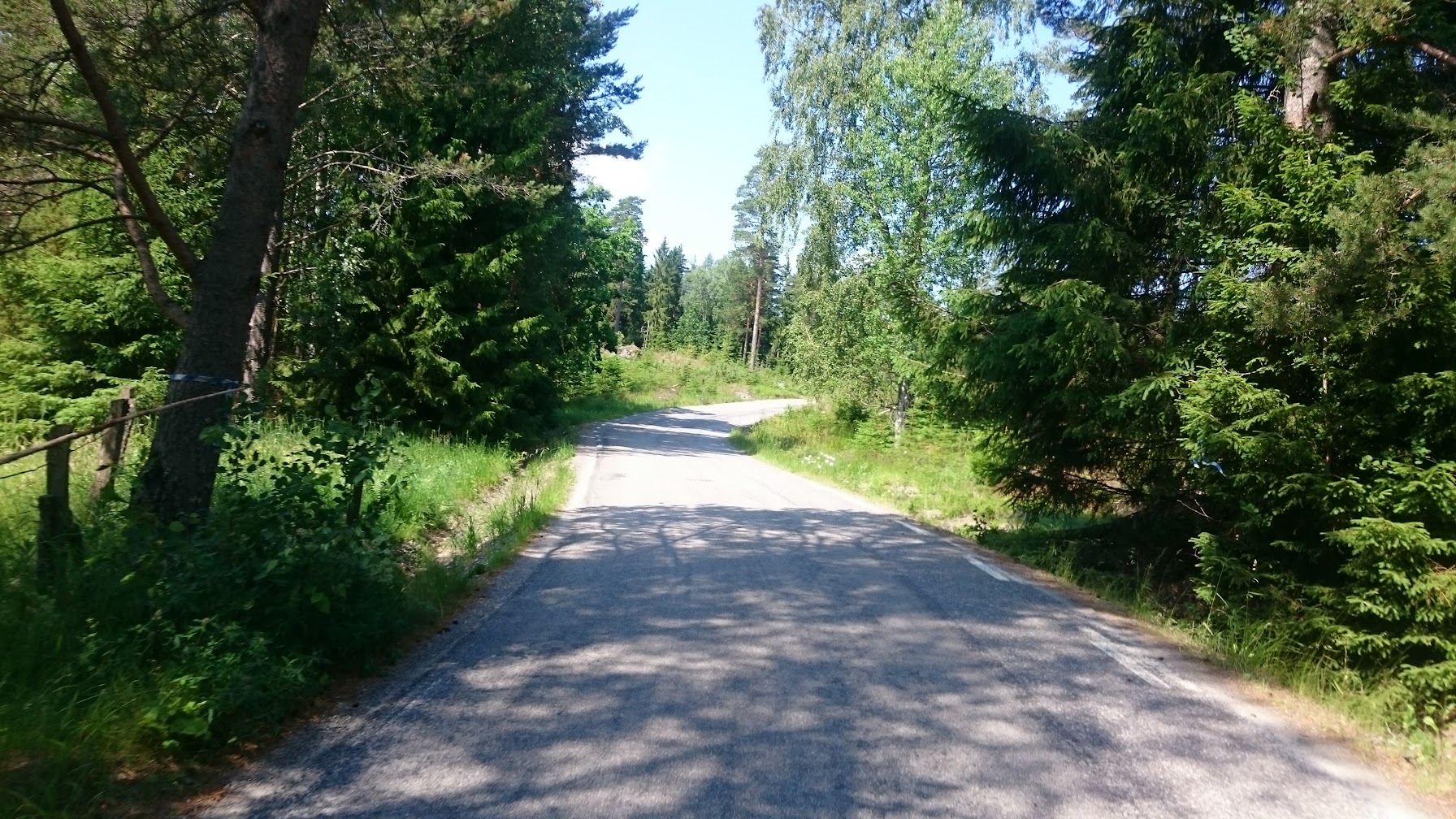 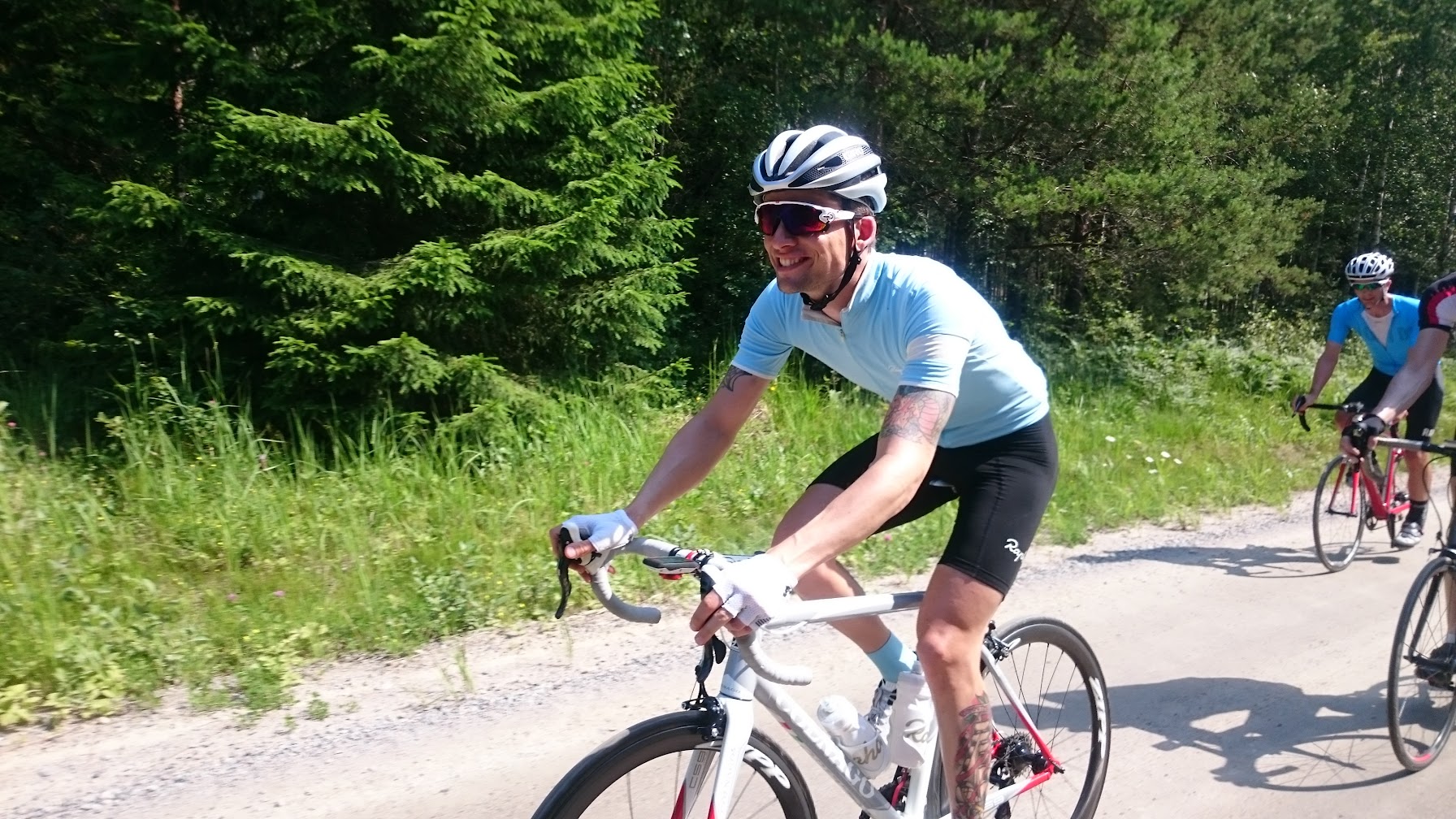 me again on gravel: 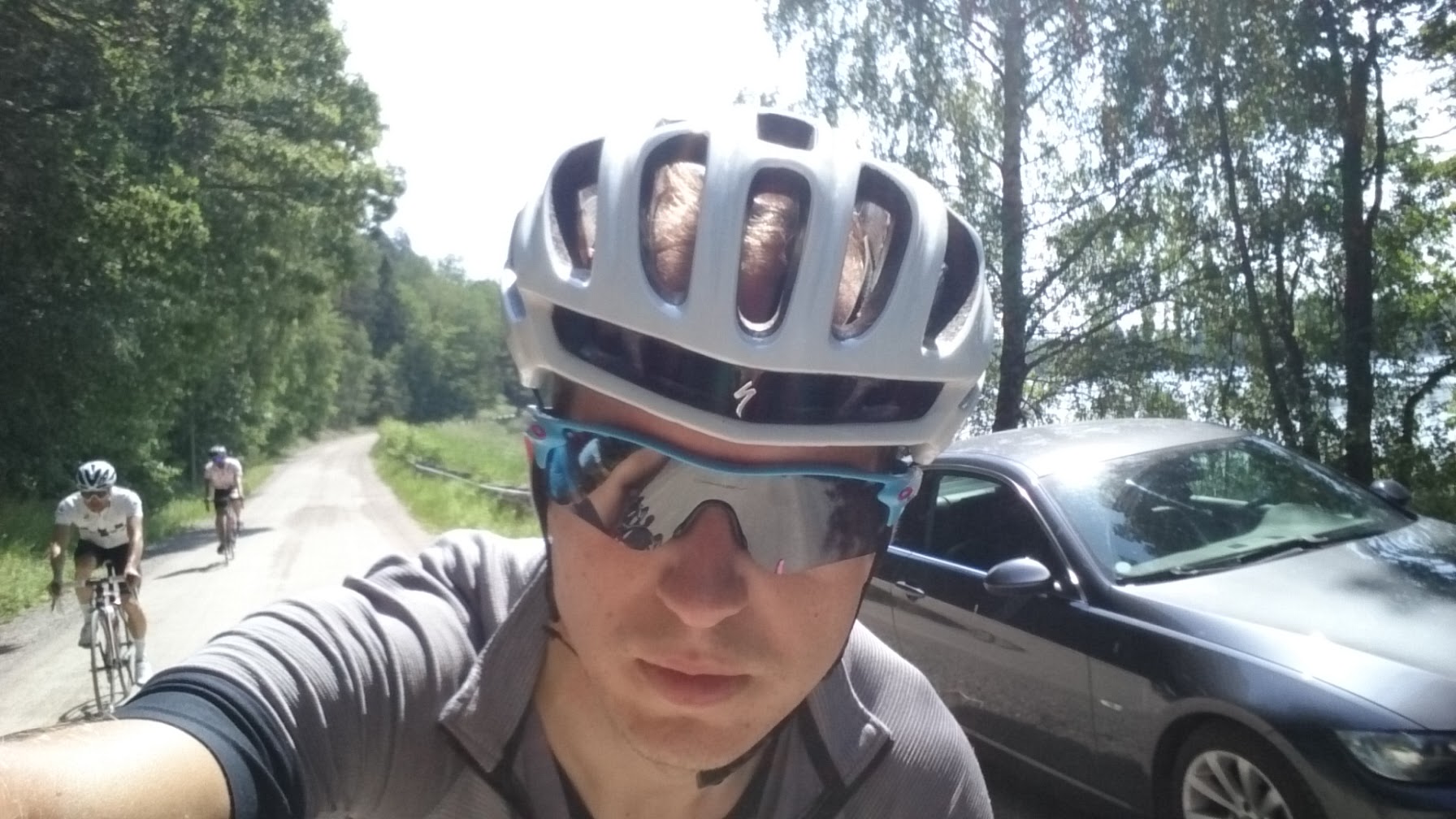 hard to not push when the gravelroads are that good. There is a difference with riding hard on gravel compared to asphalt. The others in line after: 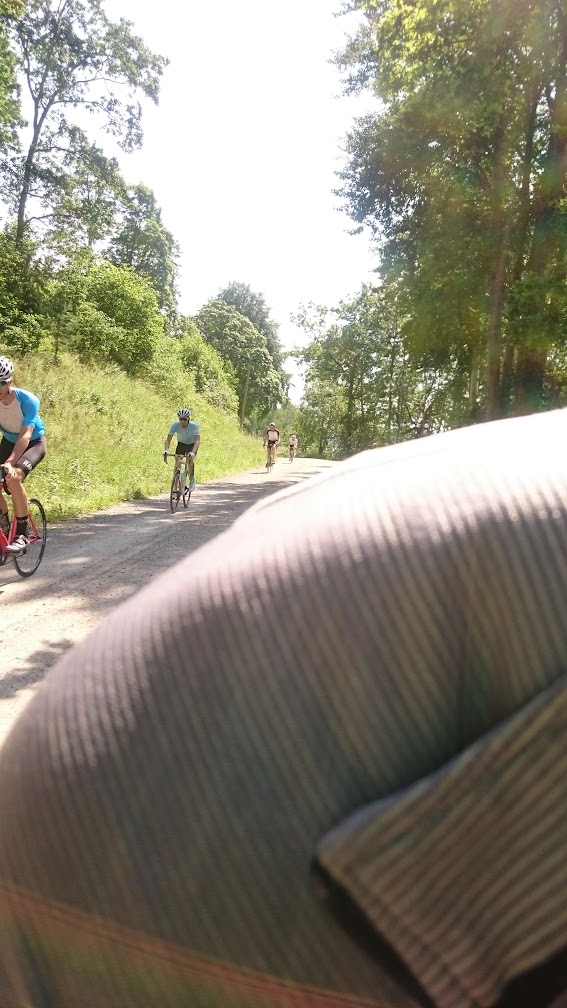 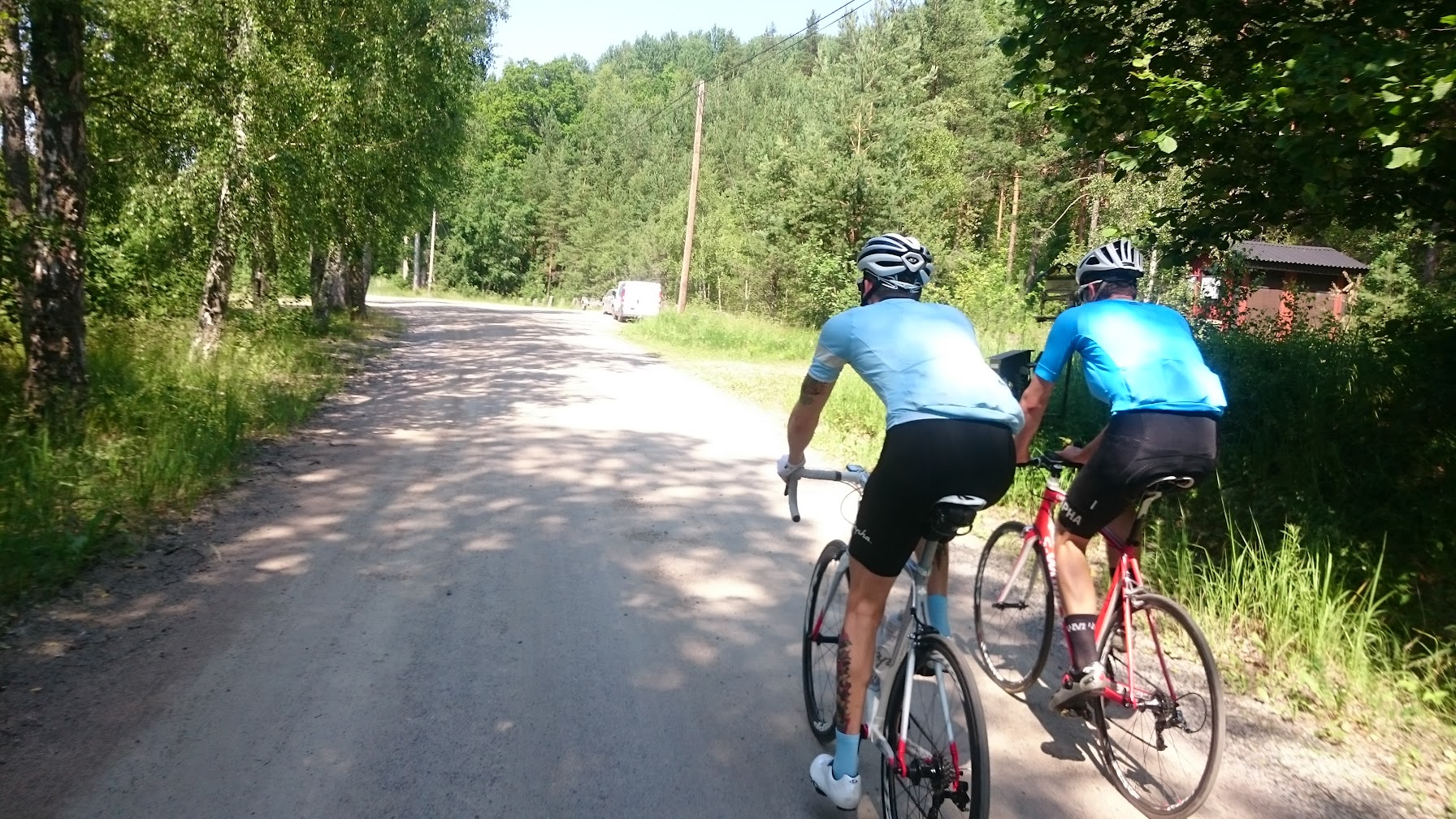 This was after this years first bath: 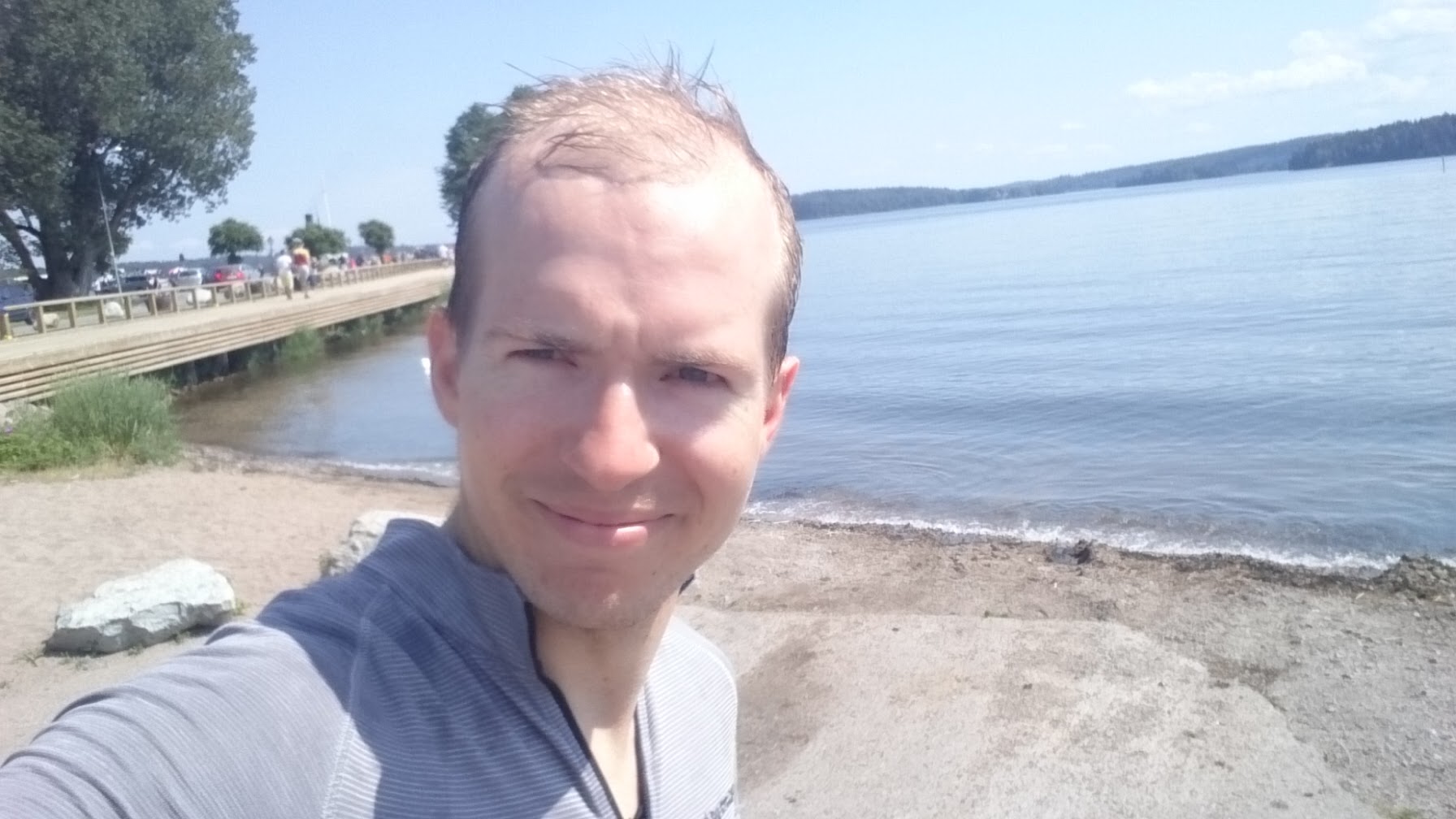 All riders was in the lake to the bibs to cool down a bit in the summer heat:

Then we had lunch and rode some more. Was a bit crispy in the end so happy with the stop at Sturehofs castle: 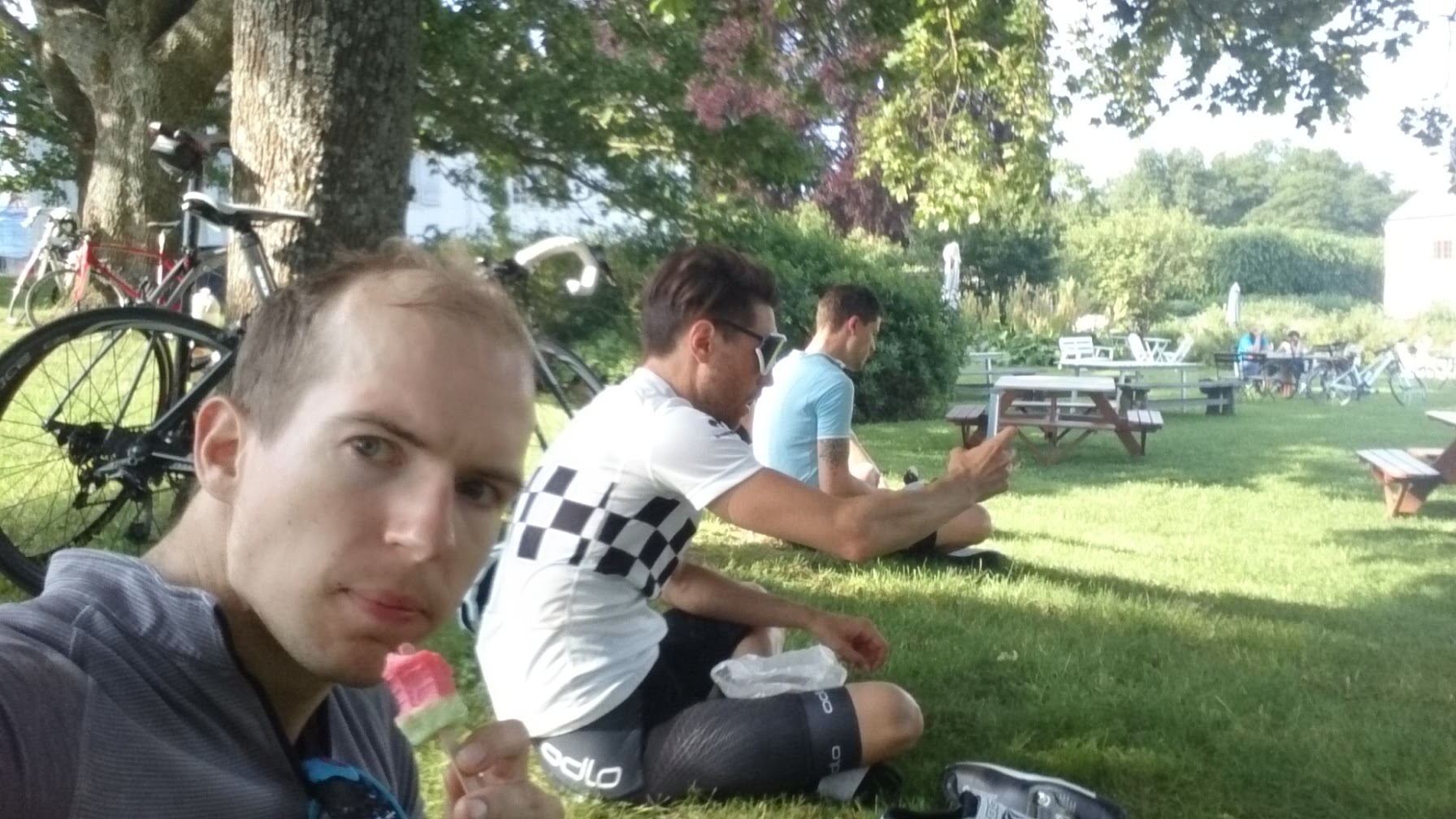 It’s funnier to ride with others than riding alone was my plan today so when mostly of my friends was out of town I met up with Stockholm City Triathlon Club this morning for a 120km ride with a coffee pause like it should: 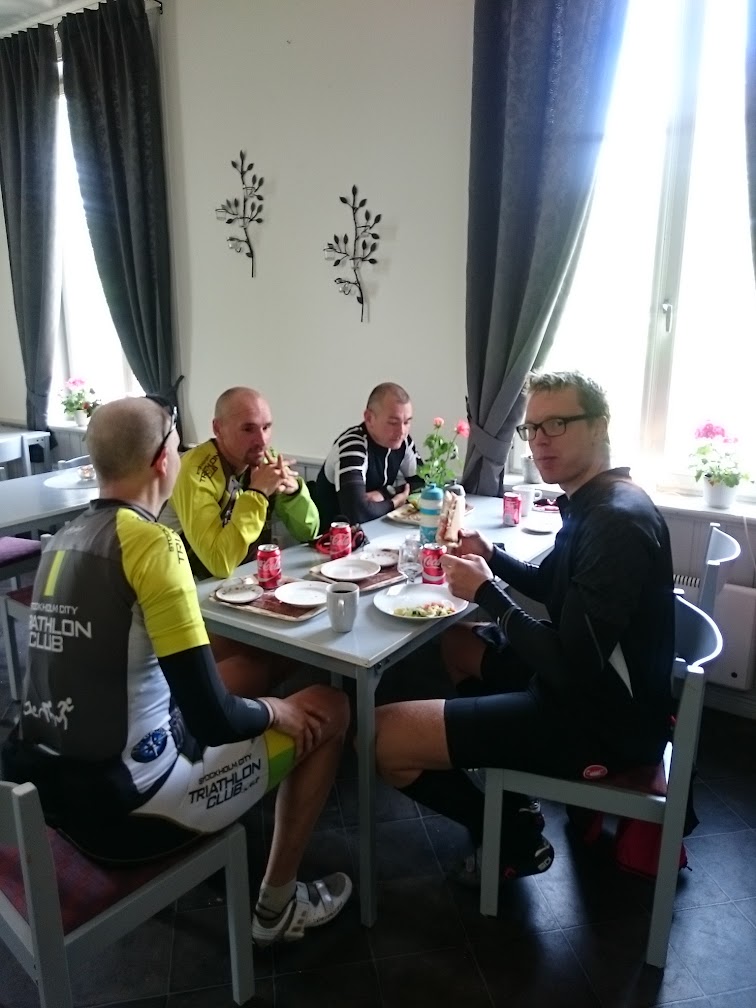 Started with 9 riders but after around 25km some left and we where 5 left riding the rest together. 4 without leg warmers and me with. 😉

Awesome testbike today, felt different with a carbon bike but in a good way. 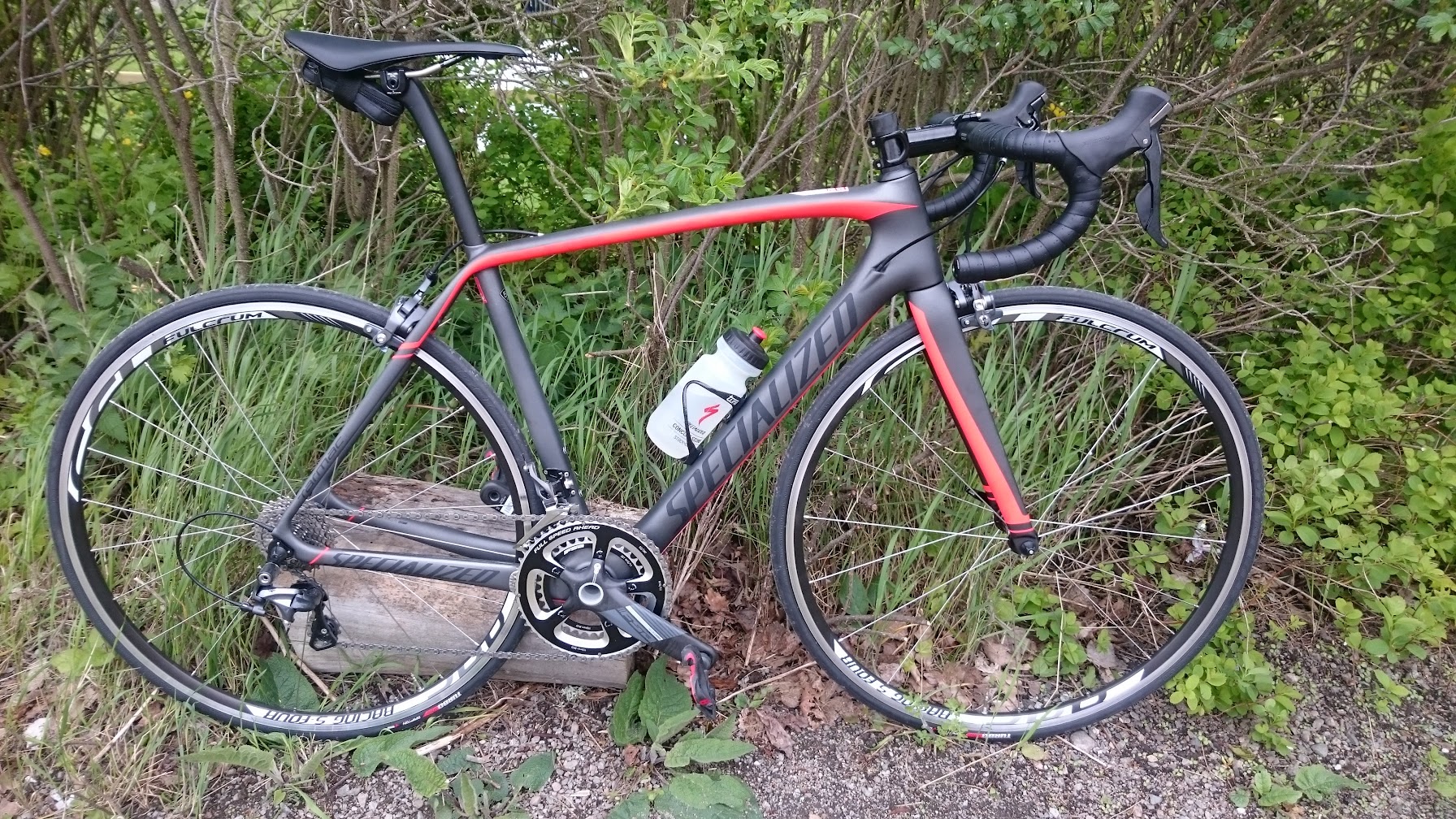 My style today showed how to ride with style 😉 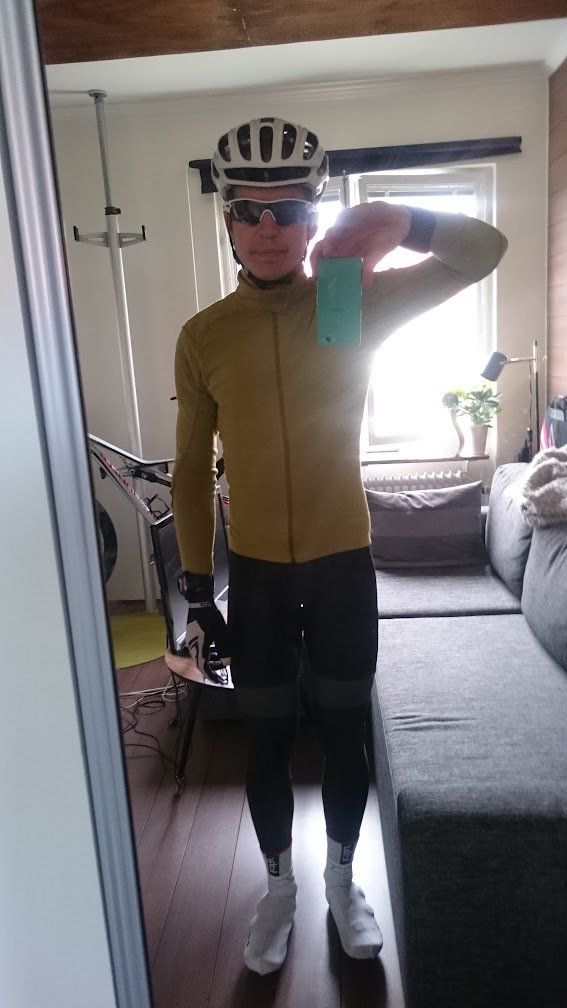