First things first. Today in beautiful weather and first morning in short-short kit for me on Le Peloton. A big group: 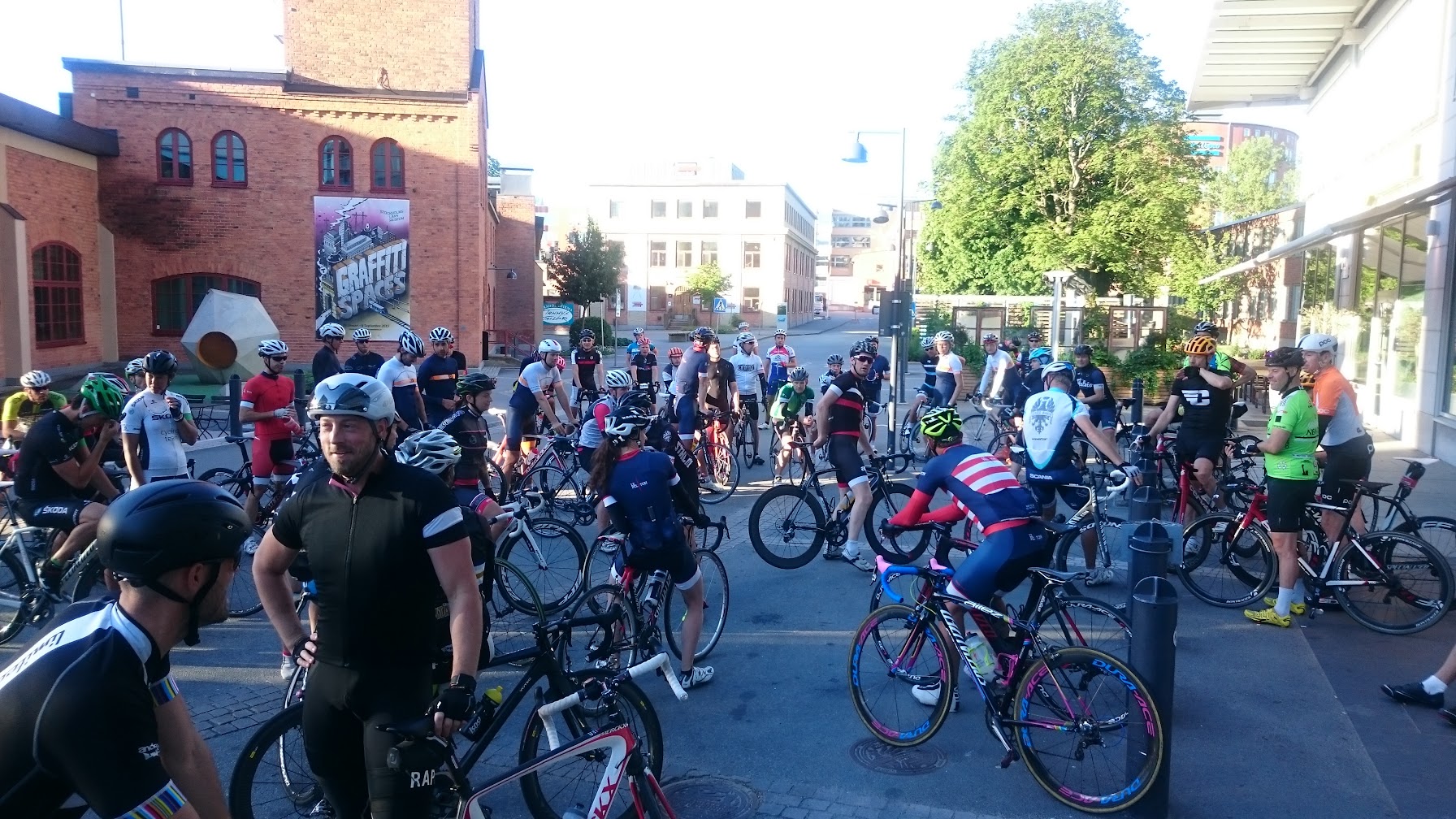 Including Johan who took a picture from above: 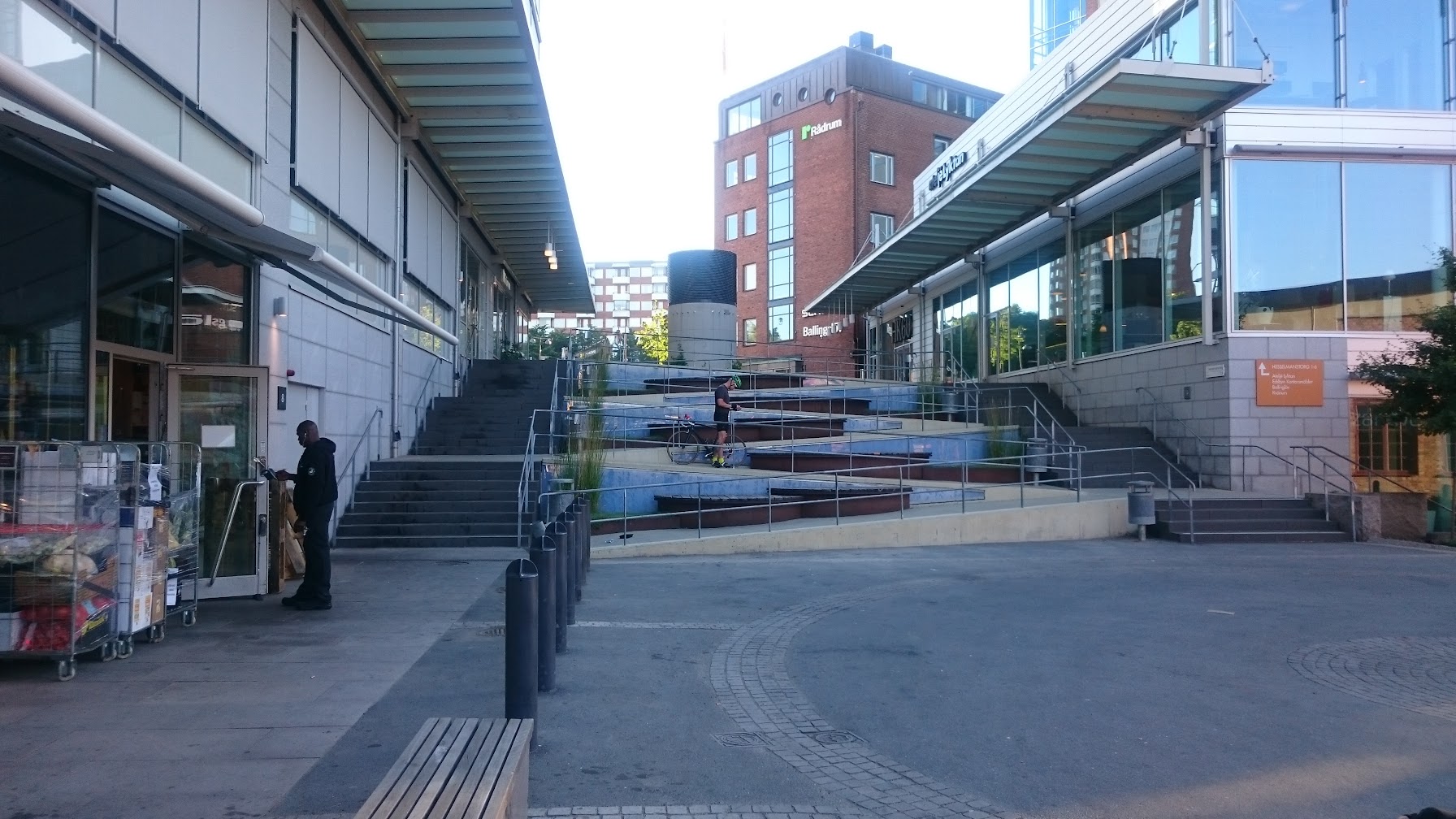 Big 1st group but was okay to Fisksätra. A bit stiff legs up the last climb there. But on the way back it happened. The front of about 8 riders got away and was a bit lucky with the redlights and we who got dropped wasn’t as lucky. Was around 25 riders that worked pretty good together and in one way it got better. Now the fastest was alone and instead of having a long tail we (the tail) got to work together. Was really hard but was up in front some times until Flaten where I got dropped at 52km/h. Got up at a turn and passed some guys on the last straight 😉 Super hard, super fun, super good training. 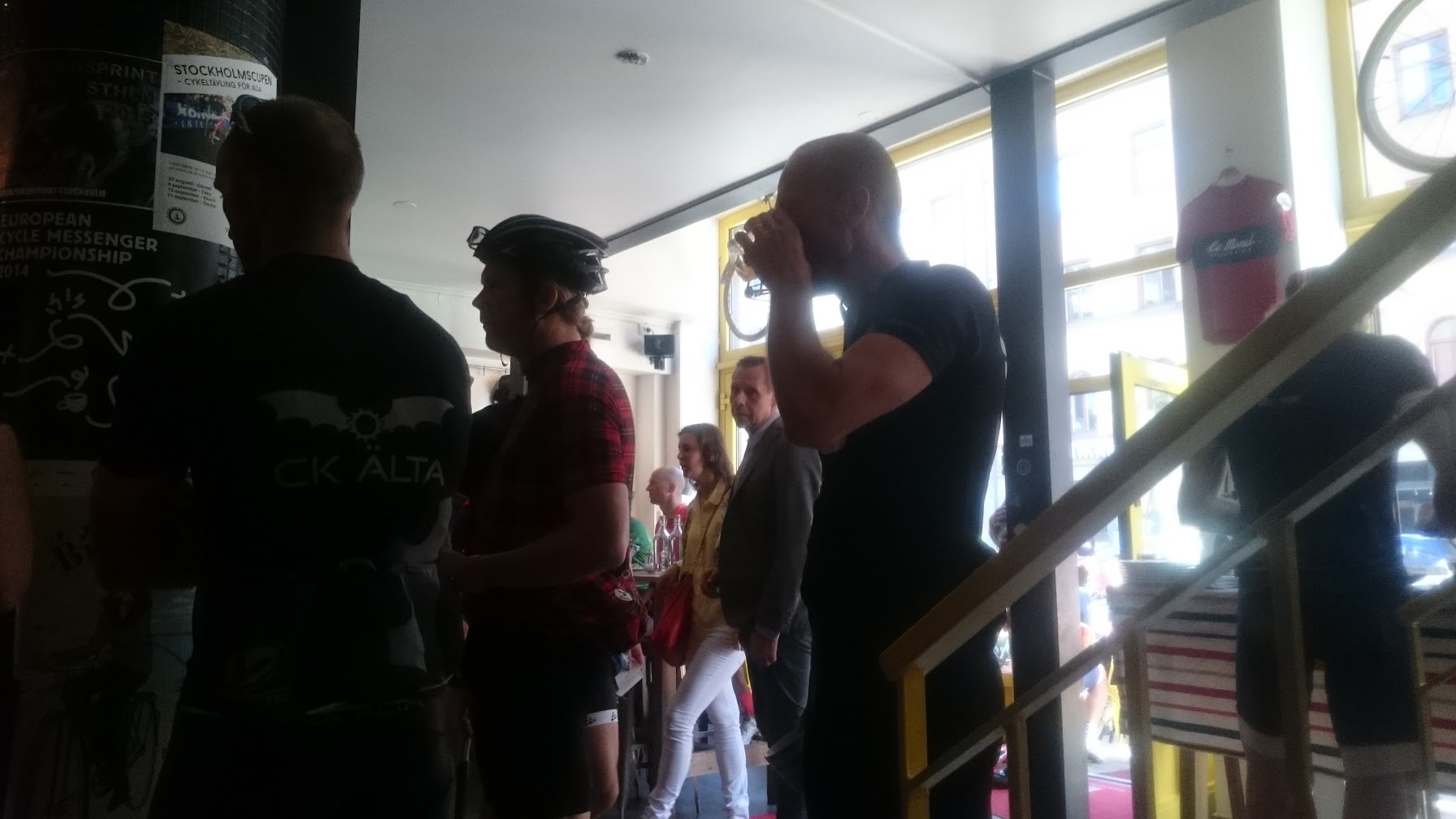 At work we had a bookrelease for Fredrik Kessiakoff’s My Own Race with some cycling as a start. A fun time in the forest with the guy who indirect got me interested in Cannondale, in Pro XC Racing and in lightweight parts: 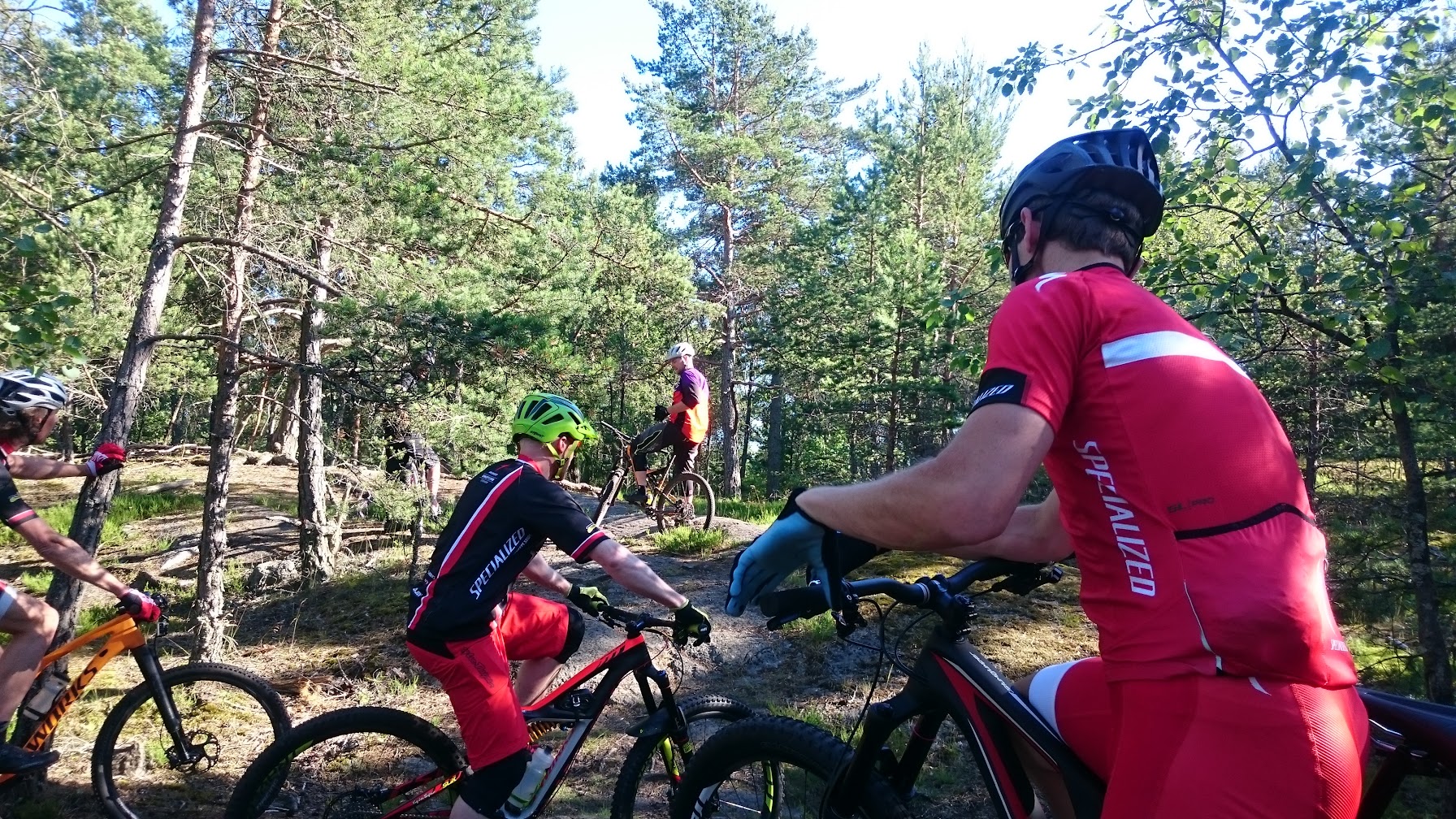 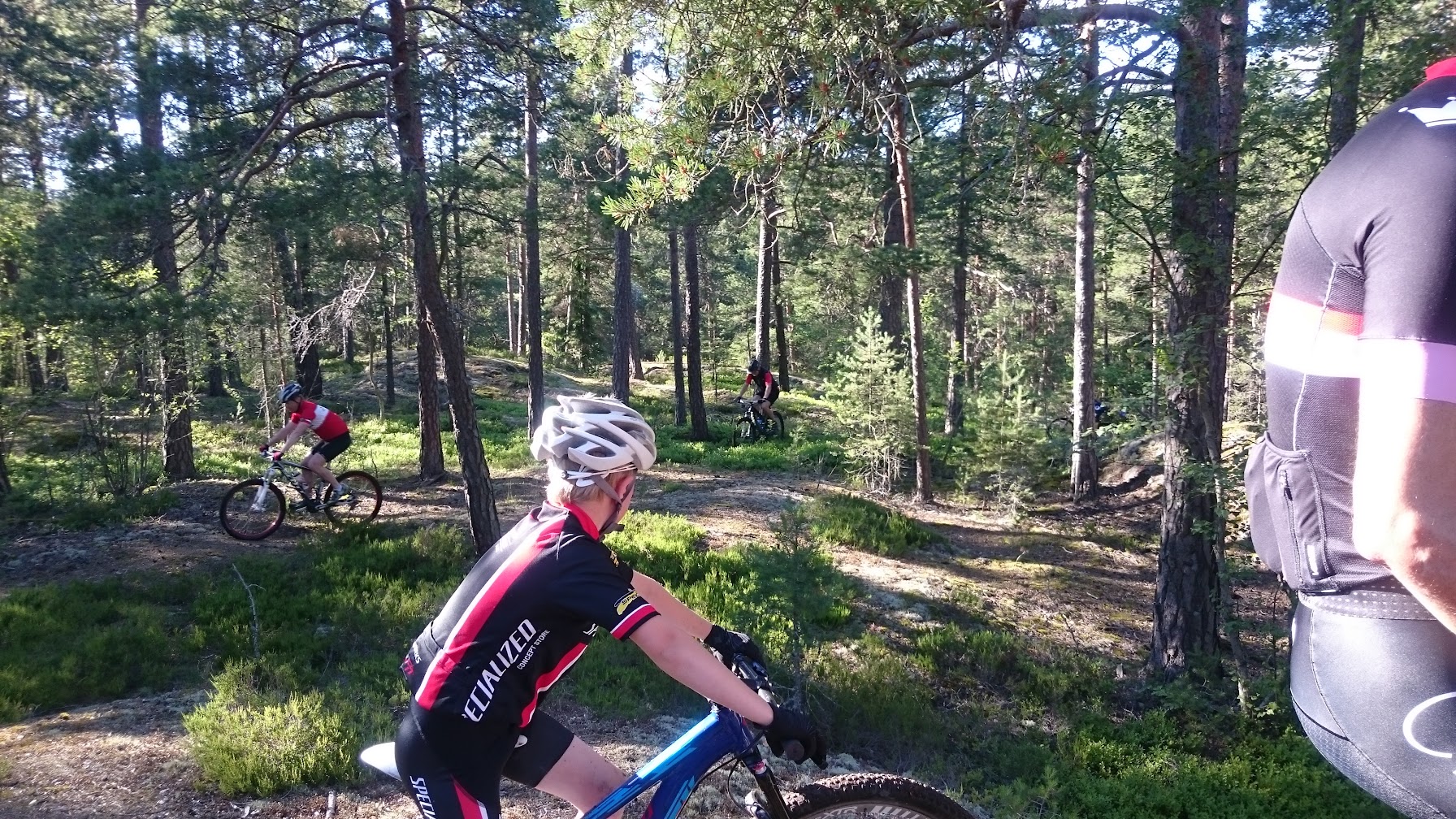 Talked, answered questions and signed his book. All after some food from a food truck and great talking at Specialized Concept Store Stockholm 🙂 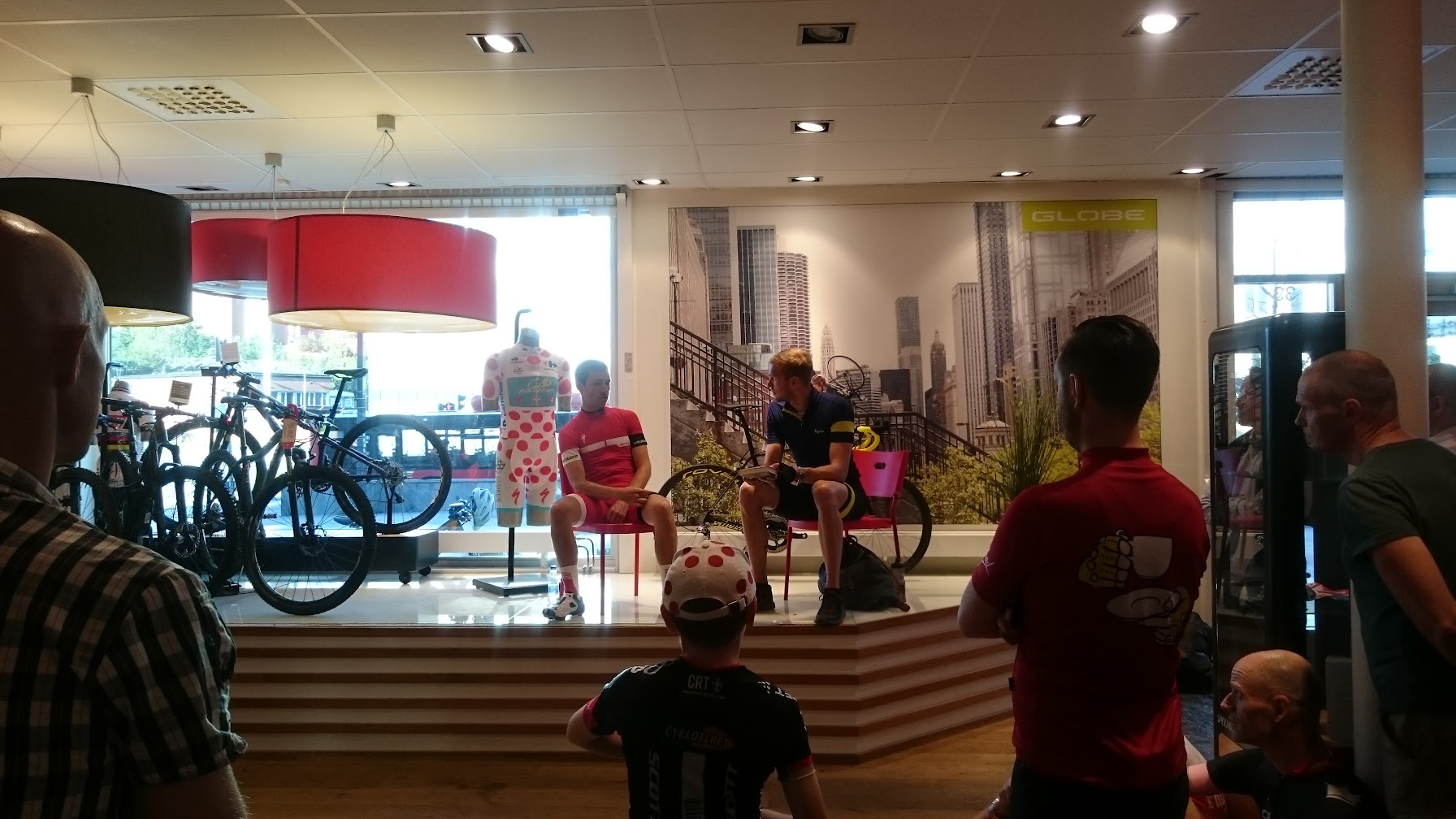 A long but fun day.

of not riding Le Peloton is a bit odd. Today it was supposed to rain all night and day so skipped Le Peloton this morning. Haven’t seen any pictures from it either so maybe it didn’t happen. But the strange thing of not feeling heavy legs on wednesday is a bit strange. When I also forgot to start my watch when I rode to work made the day even more empty. Got a nice lift home so no riding to report of today.

Also forgot to take a picture of my even more colourfull Allez.

Topping with missing the legend of cycling at work.

A day to forget, a day that just passed, a day of waiting, a day of stress. But it’s not worthless, Heard some great bike news, have laughed at work, have fixed a lot of bikes, have invested in the future. 🙂

Ending with a picture of the guy that helped another guy to learn about weight so he could pass the it forward to a young guy like me many years ago:

The day started trying getting a PR on a Strava segment right outside my door, failed and still fastest with the Roubaix last sunday 😉

Not as many riding Le Peloton today like last week, maybe the weather was the key to that: 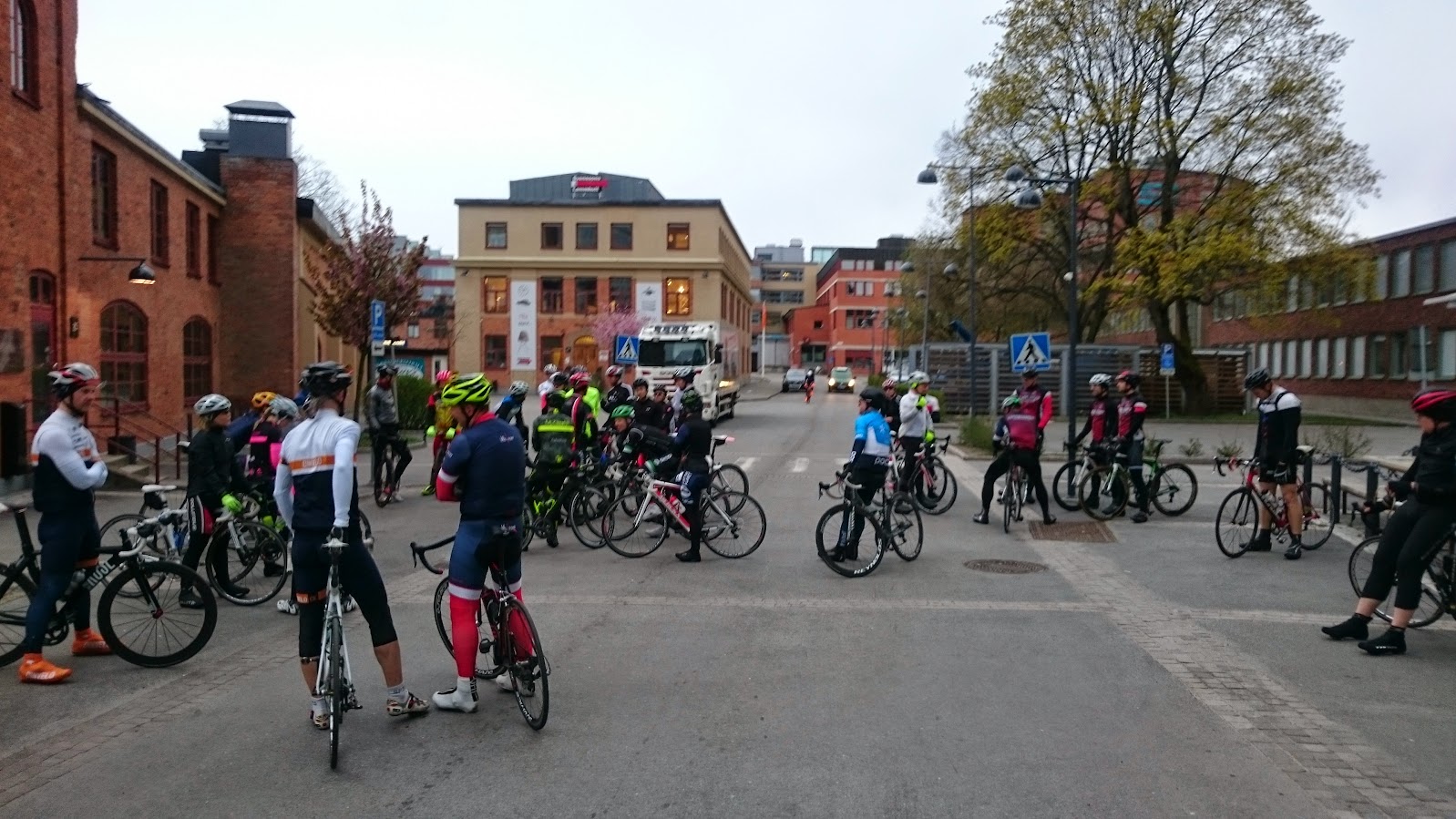 On this picture you can see my Swedish idol in mtb. Had the honour to ride with Fredrik Kessiakoff today (for a while). A classy rider that knows how to ride and when I suffered up to Fisksätra today it seemed so easy for him, but worse for some other riders.

Today I rode with the 1st group, rode smart and felt relaxed. Being stressed is never a good thing when you try to push the maximum. Up to the Fisksätra sprint I was in the peloton, not helping but still there. Back to Saltsjö-Duvnäs I got in the wrong lane and ended up in the front for a short while, that’s when I failed. Was a too big effort for me so dropped just before Saltsjö-Duvn’s. But connected when the slowed down to turn and sat as last rider. Hard right up Ektorpbacken and I got dropped for real.

Rode alone to Nacka Forum before the 2nd group came. Joined them for the rest and ended with some PR and some 2nd and 3rd times. Satisfied with the ride and felt that I did my best. But still learning riding good and is trying to be better every ride. 🙂 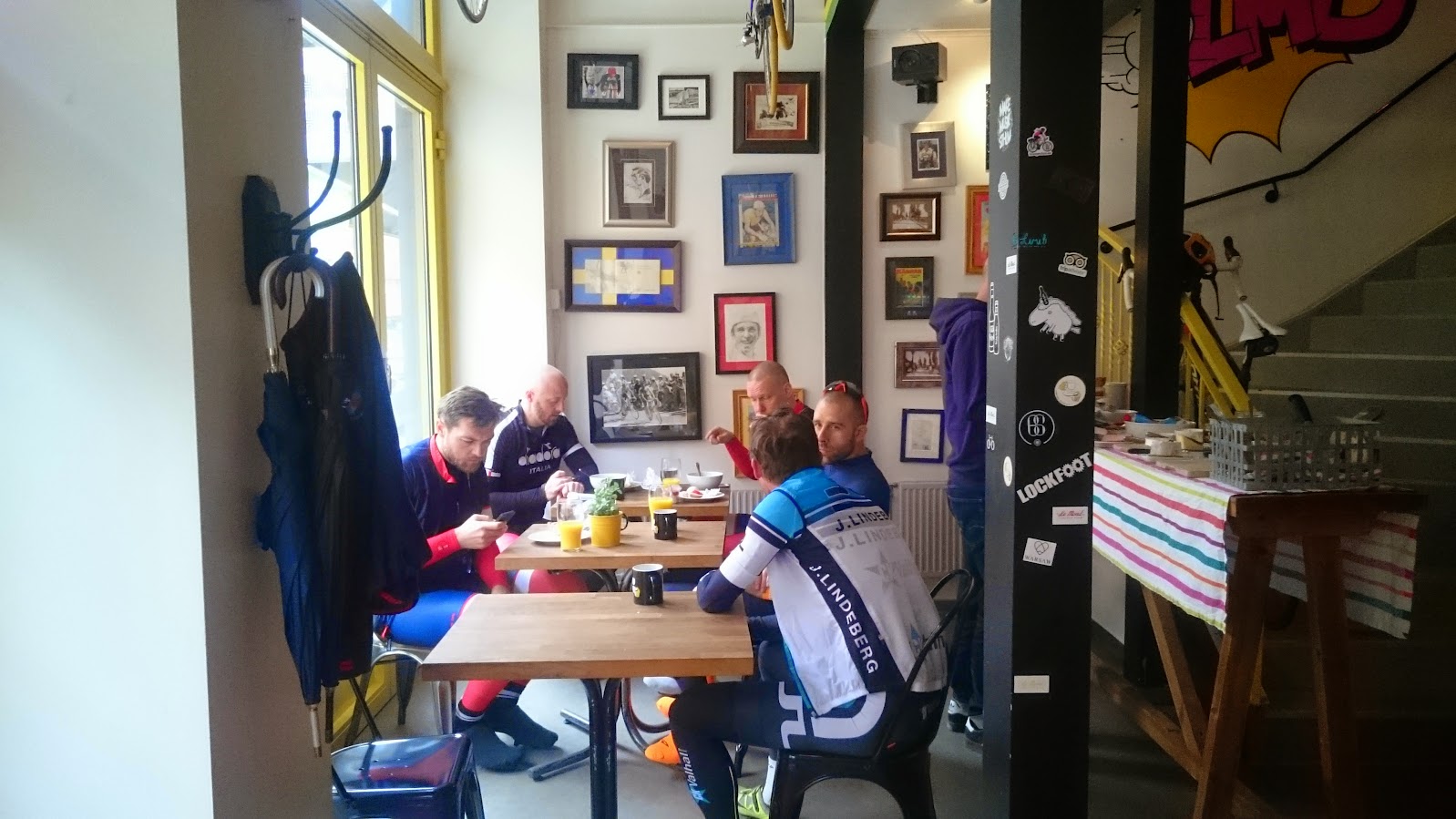 What a stage today. It’s very fun to see someone you know ride Giro d’Italia, but to see someone you know, in his second season at Pro Tour and first Grand Tour step up and show everyone that he’s dangerous is something else. Today Tobias Ludvigsson was in a breakaway and it held, for some riders. Tobias fought well but hard in the end, ended 4th and did an awesome stage! Love it and like he talked about the last times I met him: ”Living the dream”.

Results by the man himself and last picture by Eskil Laago. If you in some way missed it like I almost did when the connection in church wasn’t the best you can see some good and bad (Kessiakoff crashed) highlights: