16″ snow has it come in Stockholm today, total chaos and all busses cancelled. My plan was to ride my Sequoia to work and change wheels/tires for my new ones. A lot of snow made it a challenge but was fun without stress and swinged by Le Mond for a Le Peloton breakfast. Quiet a group of riders in the snow today.

At work with me Sequoia:

Patrik arrived later with his Enduro claiming it was better for this weather:

But 38mm vs 2,3″? In this weather only one bike is good, fatbike. We had an instashoot with a nice Fatboy Trail, perfect bike for this weather:

First time for me riding with googles, is pretty cool and really liked the colour of the Oakleys we used 😀 The Fatboy won easily over my Sequoia and Patrik’s Enduro.

Through Stockholm passing the castle without cars 🙂

Was riding with friends a co-workers a bit. Hard to be together with big groups and me and Magnus a bit stronger than the rest of us. We dropped them at Årsta Havsbad and after going easy for a while after Ösmo we decided to stop and wait in Nynäshamn. Rode together up to Sorunda, attacked with a couple of guys from Haglöfs up Kessiakoff’s climb, it’s easy if you’re not attacking 😉 and after been waiting for the others we ended up in a small group in the front who rode away. Was around 7 guys going around for a while but when we came back to Stockholm we where 5 left with one a bit more tired then the rest of us. Was magic to pass the traffic on safe closed roads through the beautiful town.

Was really tired in the end and when I noticed we had to go around Gärdet and Kaknästornet instead of straight to the finish I was more tired. In the second last corner I went in the front and then it was full speed to the finish, last straight was full speed for real and hoped to be first in our group but Jonas from Haglöfs passed me 😉 Fun sprint that killed my legs. Me, Jonas and Magnus after finished at 5h11min official time:

170km and it felt good, the distance was never a problem and thinks that all my long riding makes a difference. Learning by doing so to speak 🙂 Fastest of the amateurs was Nils Penton and Eva Lindskog, two pelotoners 😀

Fun day in the saddle representing Specialized Concept Store Stockholm and after some food and talking it was time to watch the pros:

It’s said you get fast if you do intervals, doing so with a fast rider like Edvin would be a winning concept. Met up with Edvin here in Borås this morning: 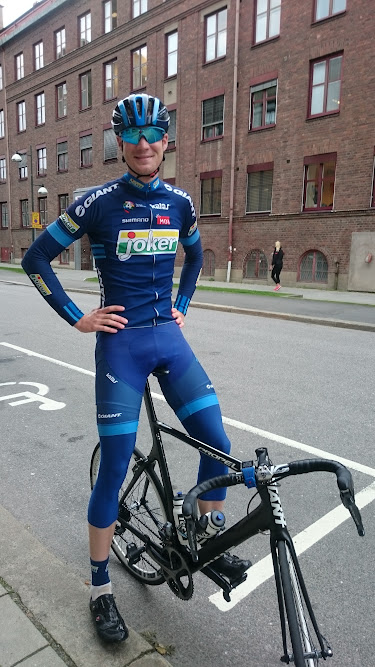 Rode to Kinna and back with what I thought was 5 6min intervals. The first one which I managed to sit on Edvins wheel on was just a warm up. Hmm. The ”real” 4 I claimed on wheel in the beginning but got dropped pretty fast. It was hard but fun to see the difference between us. and happy that there is a lot of difference too. 😉

Great to ride on roads where I’ve been traveling with car and driving on many many times but never ridden on before. Passing the house I grew up in too and talking memories.

A great morning ride which made my legs feel alive, or just waste :p

I’ve been cycling today but more from that on Strava. And a big thanks to Tommy at Öster Cykel for the bike I’ve borrowed this weekend 🙂

Then the national time. Normally it’s just the National Championships on road now but Denmark and Germany already rode their XCO Nationals too. Annika Langvad got the champion jersey once again:

In Norway they started the road Nationals and today it was men U23. Team Joker with a strong team this year too got the first 3 places 🙂 Odd Christian Eiking won in front of Truls Engen Korsæth and Anders Skaarseth: 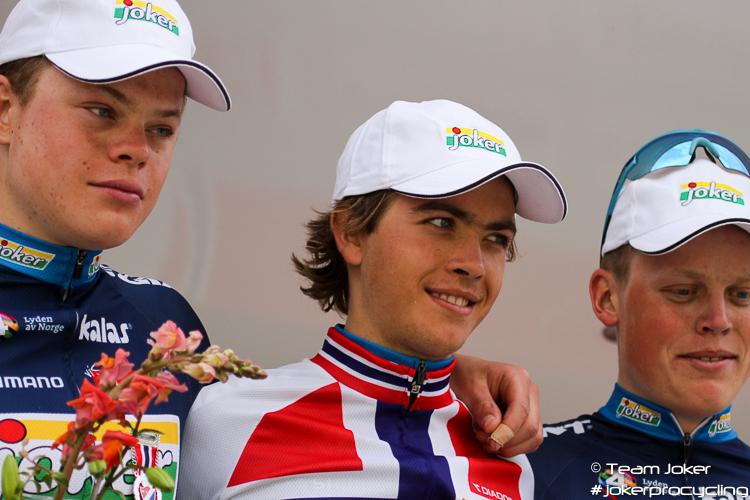 Would have loved to see that live 😀

No win for Team Joker but close. Last stage today so let’s hope for a great final result 🙂

A great day and finish by Team Joker once again 🙂

Last year he was sick a long time but came back good and strong. This year the results are coming from the strong Truls Engen Korsæth. Read what’s said about him and follow him towards the top:

A lot of racing this weekend. Team Tre Berg and Crescent D.A.R.E have been showing their power in Sweden with the 2 first road races of our season.

International it has been the U23 Ronde van Vlaanderen with a great 3rd place for Truls Engen Korsæth. Video here: TV OOST

It has been the first DH World Cup in Lourdes. Video here: Red Bull

It has been Circuit de Ardennes and Energiwacht Tour which both had a Team Time Trail which ruined a bit for many riders it looked like.

And it has been Paris-Roubaix with another tragic end if you ask me. Etixx-Quick Step have to be smarter in the end so people stop laughing at them:

The continental team that helped pro’s like Lars Petter Nordhaug, Edvald Boasson Hagen, Alexander Kristoff, Vegard Breen, Vegard Stake Laengen and Kristoffer Skjerping up to the highest level. Celebrated 10 years some days ago and here is a video with some highlights from the years. (even including me at 10min)

Today i was helping Reidar Borgersen and Truls Engen Korsæth in Duo Normand. Looked like this

A super ride by them and won with 49sec after the 54km pair time trial. Really funny

Meanwhile I heard from a nice commissary on a motorbike that Michel Kwiatkowski won the world championships! On a Specialized with a Evade helmet that I read a test with yesterday. Faster then Giro Air Attack and even faster then the time trial helmet Kask Bambino, that’s how he could win?