Choosed between Djurgården and Le Peloton. Choosed Le Peloton as Magnus and Linda would join and it was a safer choice for a good breakfast afterwards. Many at the start even on a friday with a little bit colder weather:

Felt a bit tired and wanted an easier ride so choosed group 3. Went really well and I even could take pictures up Lindalen: 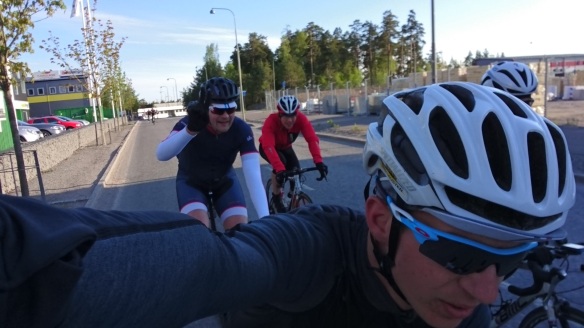 People worked hard and it was great to see. Nice with good flow and not pushing the hardest, good for my menthal health feeling strong.

No matter which group, when the end gets close everyone pushing to the limit. Magnus attacked and I tried to hang on and it felt good. Until I hit something in the road at 37km/h and lost the grip of my bar. The bike fell and so did I hitting most things sticking out on my left side including smashing my helmet which I saw first at Le Mond. Claes came after and crashed too but not as hard I think.

Up again and checking things, straightening bars and feeling a bit stiff and probably a bit in chock. lost a plate on my left pedal too but not big things so sat up on the bike and rode slowly on the cycle path to Le Mond. Felt like a crash and feeling more stupid for crashing than hurt…

Took a long nice breakfast in the sun with Emile before rolling to work. A little happy to have had my best protecting helmet today but not so happy for using my Pierette jersey from Café du Cycliste that was just waste now 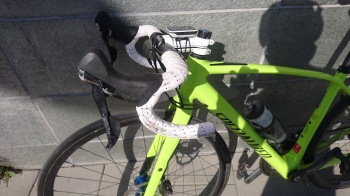 But that’s just parts and like I have said before, it’s better to crash material than the body. Sadly my body took a lot of impact too, or at least my head which is just slow and the weekend changed from a great fully booked weekend to a weekend taking it easy with a concussion. Was for over 3h at the hospital today but got to bored, talked to a nurse friend and went home again.

Now less and easy training to be able to ride Dalsland Runt in a couple of weeks. 😦 Be careful and stay safe on the roads out there.