Tuesday gravelriding, CX Peloton by night. Last year it was a lot of people and I thought we would be at least 15 riders today too. But not, just 5 guys at Cykelcity and 1 met up at Hammarbybacken. 3 fast, 3 ”slow”.

Started a bit easy and then Jonas went up and smashed the rest of us, I had to drop with Mario on my wheel. He passed me a bit later and I was last at Erstaviksvägen were the rest waited. Full speed again and I tried to hang on a wheel. Magnus took a picture:

Got dropped in the beginning of the gravelclimb but could pass Mario. Rode as hard as I could and got up to Björn. Got passed him at the golfcourse and it felt good not being last 🙂 The others waited back on erstaviksvägen and from there full speed towards the Adventure track. And noticed it was hard going downhill with a guy behind me with a much stronger light than my 550lumen Silva Pavé 😉 had to take it easy and Mario and Björn passed. On top of the bad climb we became a group of 4 with a guy I don’t know the name of, I passed and rode in front of our group down to the Adventure track 🙂 Fast bike sometimes.

Rode together for some hundred meters before it got split up after the steepest climb and Magnus and Jonas disappeared again. We chasers tried to ride as good as possible and it went pretty fast until the unknown guy missed a turn 😉

Full sprint to the finish and it was over. An hour, my 3rd best time that loop and even when I didn’t feel so fast I rode pretty fast 😉 And while we didn’t say so many words to each other while riding we (or at least me) had a great time 🙂

Met up with Emil and Stefan at 6(!) at Urban Deli this morning and got a hard ride out to Älgö where we had a stop. So Emil could fix his puncture:

I’m trying Garmin’s radar lamp now, it can warn for cars coming from behind but not for punctures:

It felt a bit better after the stop but it was clear I hadn’t been riding properly for a while. It all ended back at Vivels where we had a nice breakfast, I couldn’t resist the cake of the week 😉

Was really nice to be back and even while my Diverge wasn’t the fastest with me on it felt so good:

And as the weather got better over the day I decided to ride without shoecovers on my way home. Trying a pair of new long socks today, really nice with some color:

Nice to be back on the blog too, even while it’s not about the new Sram Eagle 1×12 groupset.

I got a bit odd feeling for racing Lida Loop on sunday. Not in racemood like for Billingeracet. But today I started the day and got some massage from Access Rehab, first time massage and it was hard. Hard but felt and feeling a difference even if I haven’t had any problems before 🙂 Thinking of having a massage once in a while now when riding so much compared to earlier.

Second thing was after work. Went to La Chemise and picked up some new club clothes ordered a while ago. Including the coolest clothing I’ve ever tried. A skinsuit working like a jersey so you can open it normal in the front. A 2 pockets on the rear to be able to carry things with me. Bioracer had it for a while, Etixx-Quick Step uses it on some one day races and it’s just an awesome piece of work. Really tight too so will be aero on sunday: 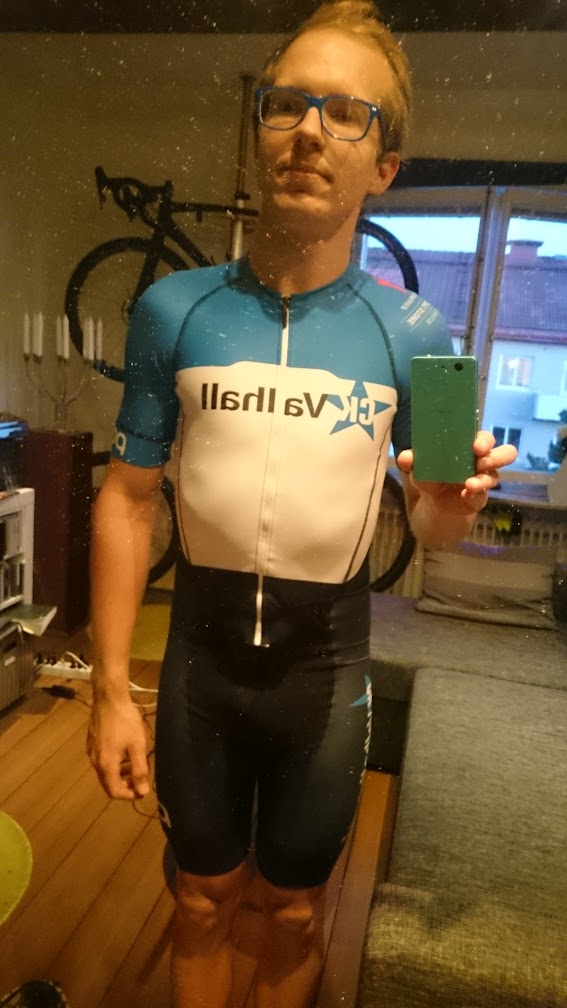 Do I see you on sunday?

Maybe the most Swedish word is fika, isn’t available in any other language and every cyclist should know it. Fika means to have a coffee and a cake or something like that, just because it’s good. Different from lunch which is more healthy and for a reason.

We where 5 riders in the facebookgroup Fikacykling Le Mond which met on Le Mond this morning and aimed for Ösmo and the gardencafé there. Started pretty good but it started to rain so we took cover while it was passing: 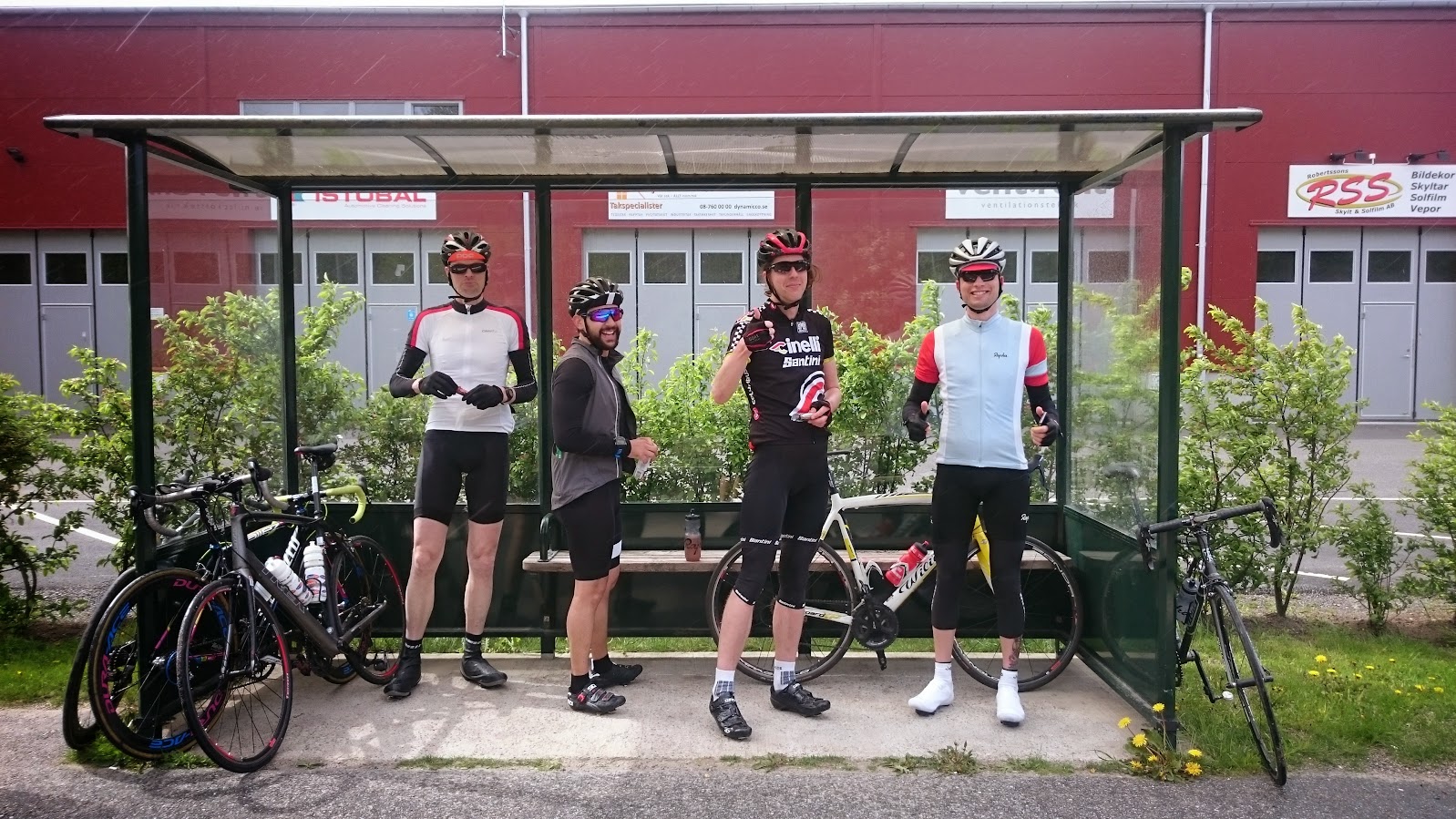 Then continued on some new roads for me, so not the shortest way. Felt pretty good and did pretty much of the work in front. Great feeling. Last open part was very windy, but with a lot of riders out 🙂 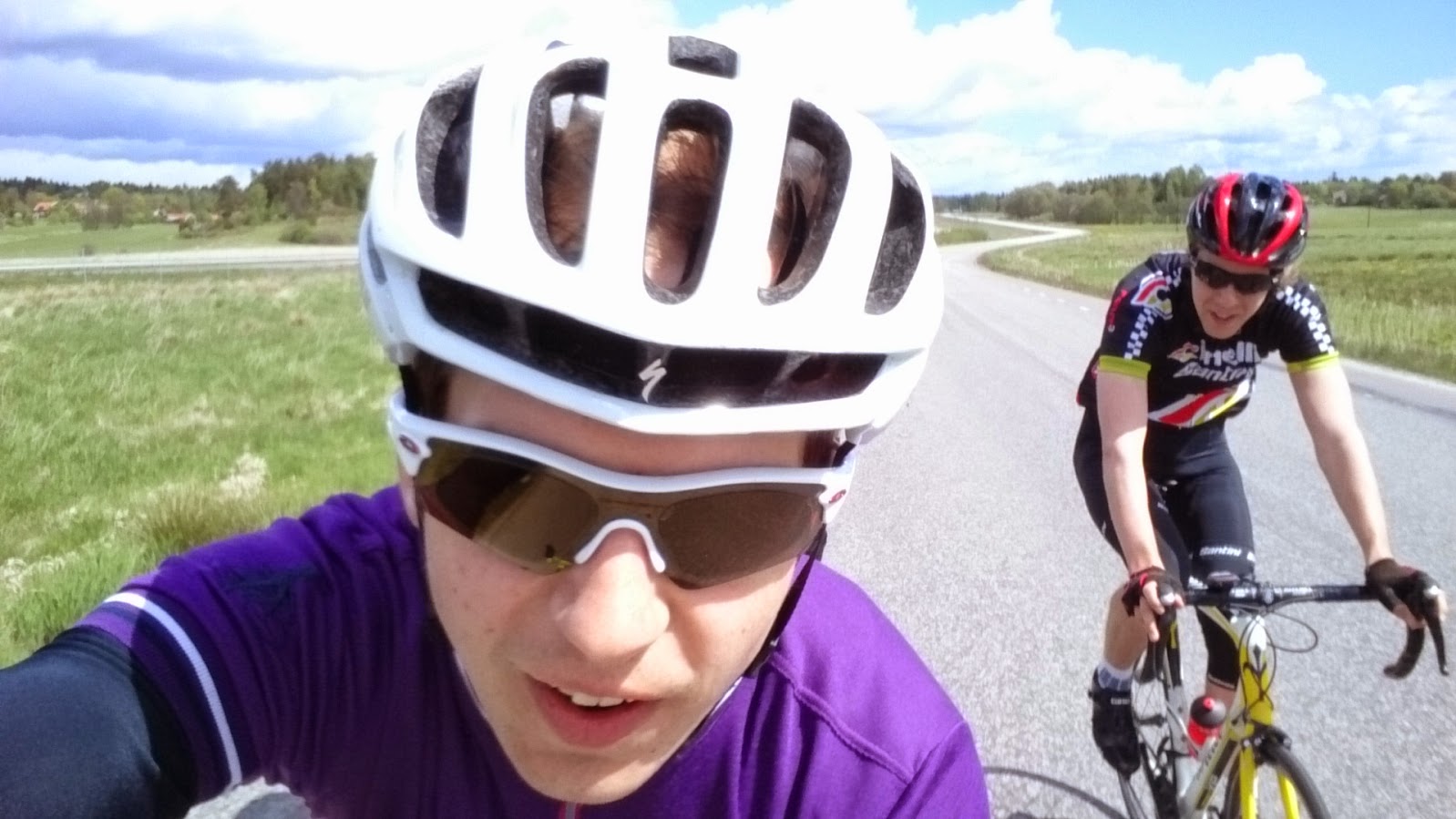 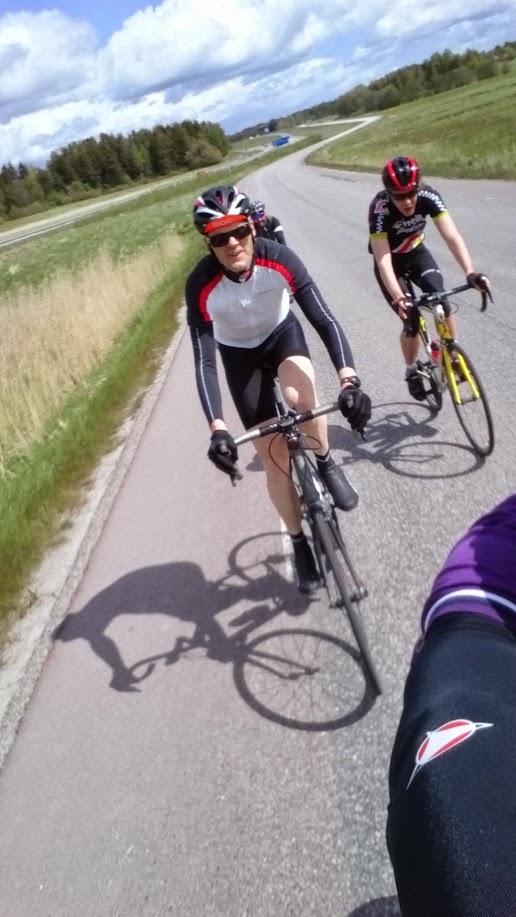 Then fika, sat outside but the sun disappeared so we went inside instead: 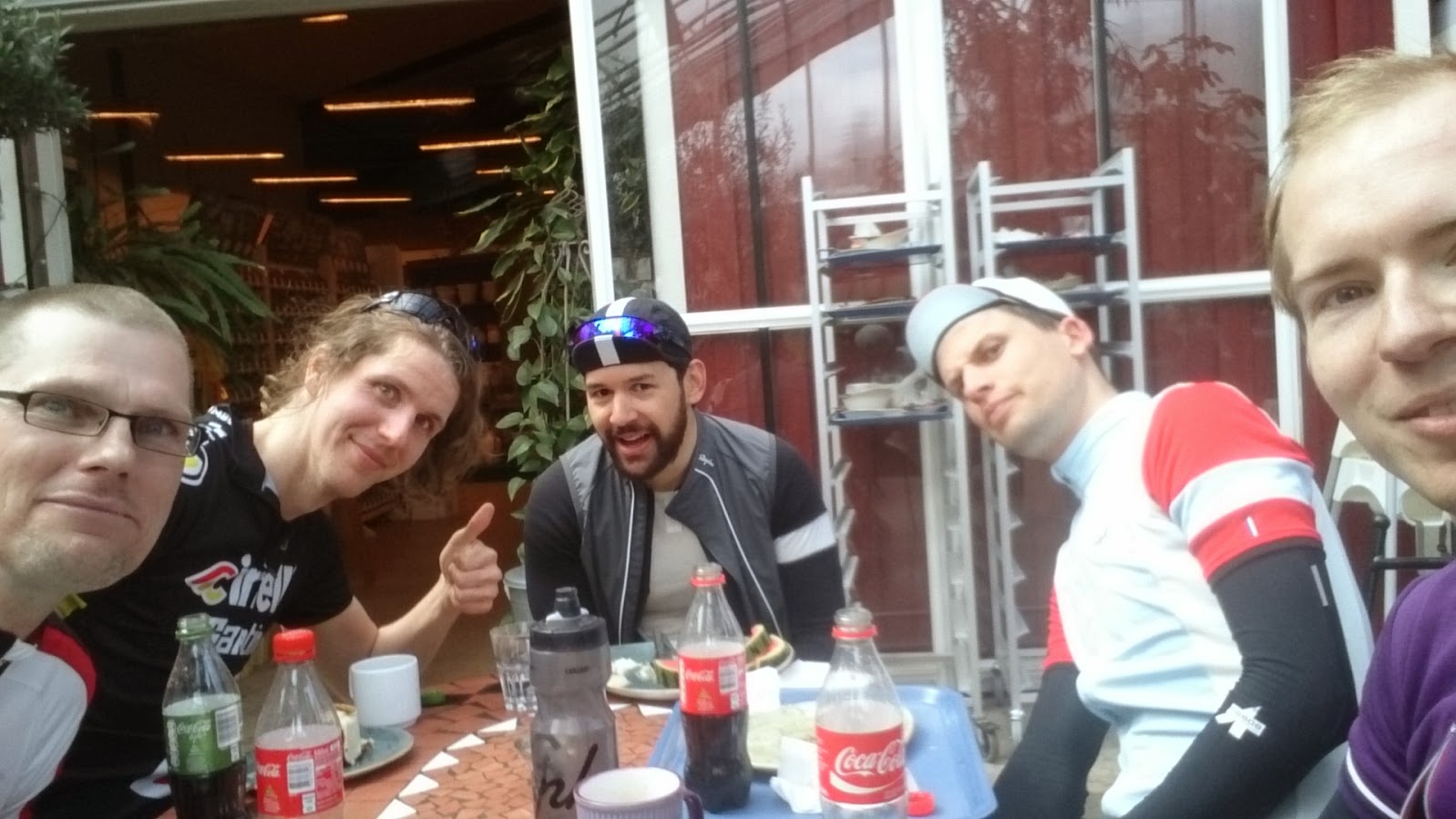 Then they said it was time to go back to Stockholm again. Hard time in the beginning but found some power again on the small nice roads 🙂 Christopher and Emil wasn’t in top shape so slowed down a bit sometimes and got time to take a picture: 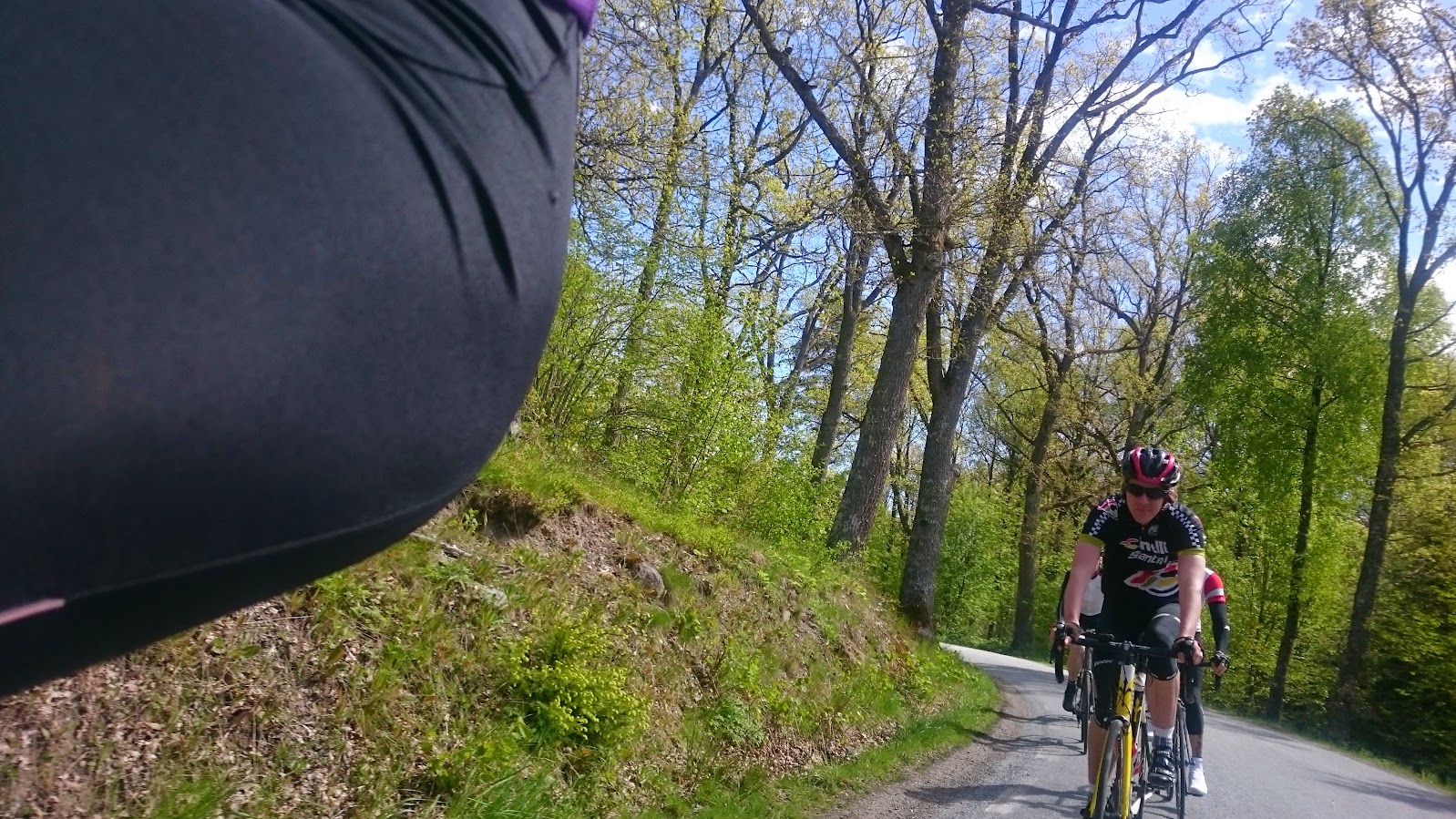 Nice to have a breatpocket to have the phone in 🙂

After riding for around 3h I started with some signsprints. Nice to even think about sprints after riding for so long 🙂 But didn’t got any company so had to do it myself. Rode a nice road to Länna in the end where Emil seemed a bit tired 😉 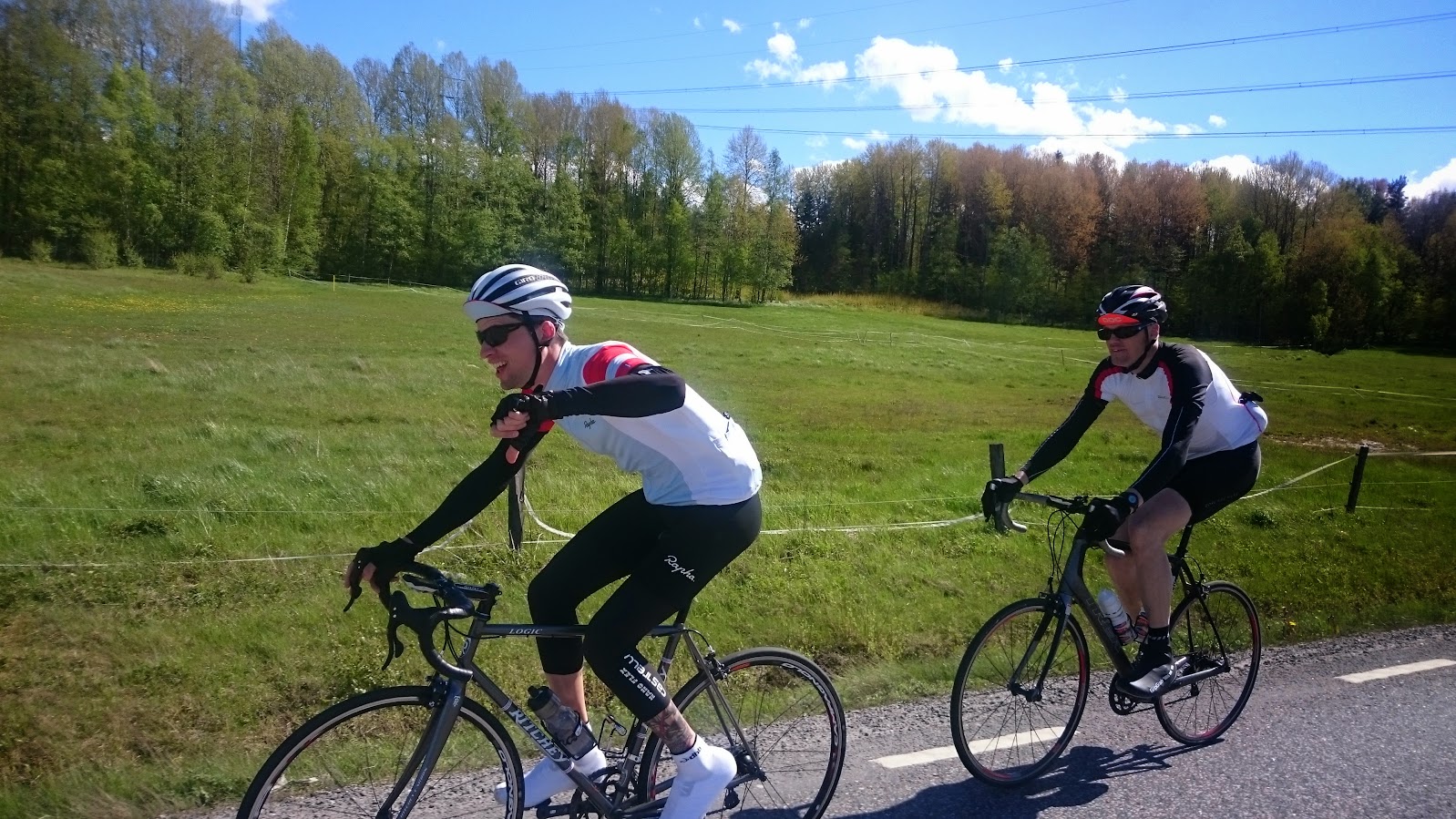 Back in Stockholm I joined the others going into town instead of going directly home. Left them on Söder and aimed for La Chemise to pick up some nice new clothes. Got passed by a Ferrari 360 on my way but passed it again 😉 Picked my clothes and headed back home. Got stuck with all the people as Gumball 3000 starts this weekend, a lot of cool cars: 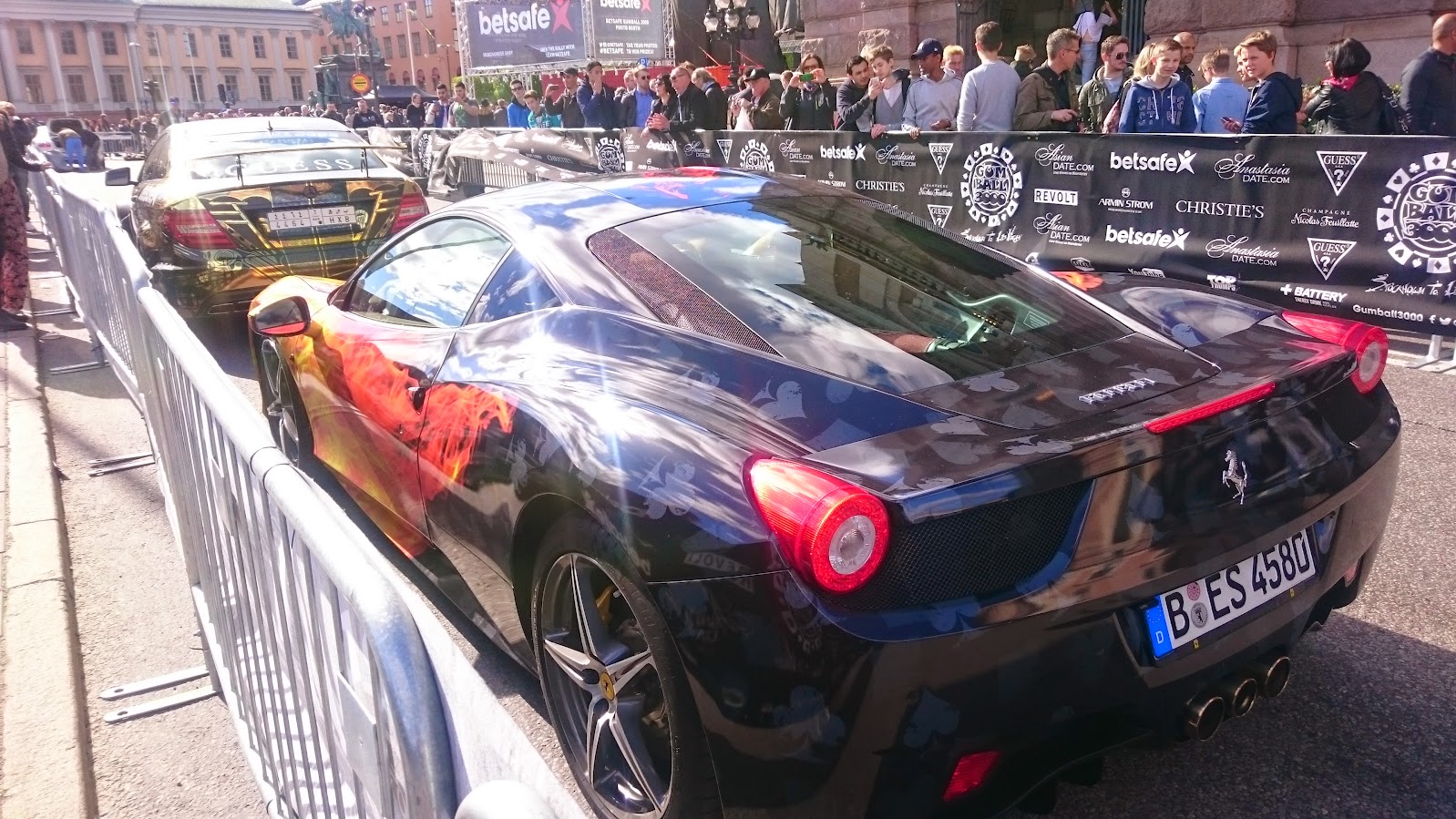 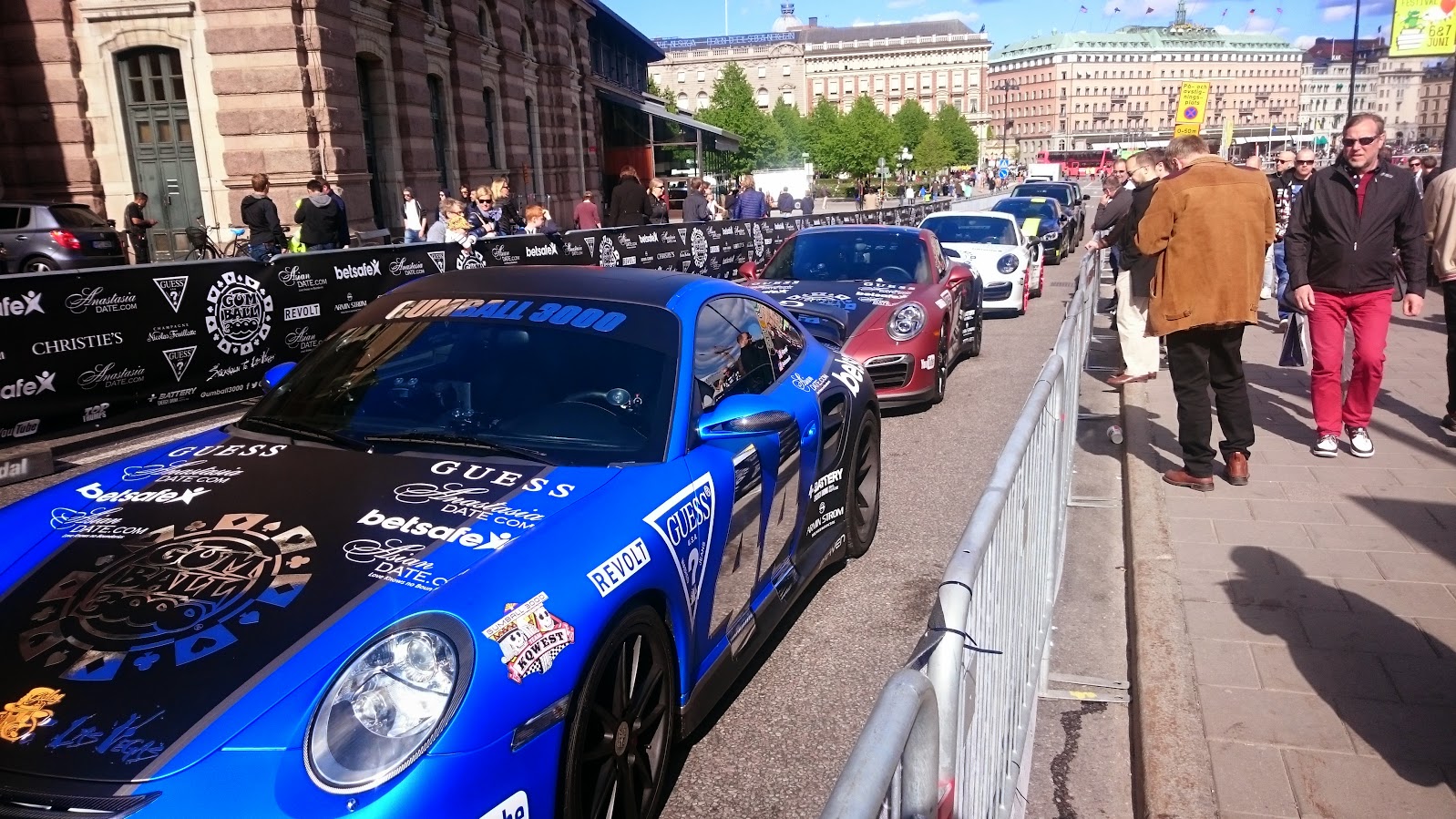 And a lot of people.

Got back home and after having After Bike on the balcony and a nice shower I tried my new clothes. Le Peloton style 😀 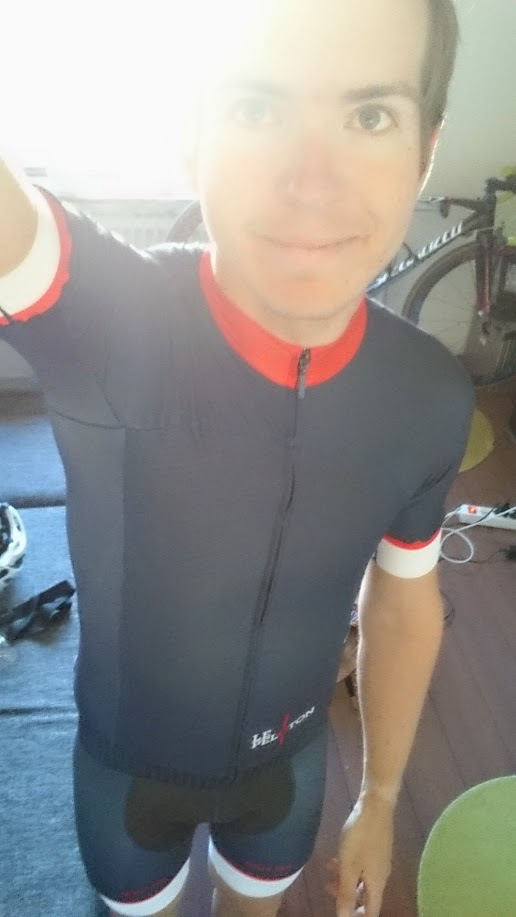 Felt really nice and looking forward to ride with them 🙂

Map and stats from today: Movescount (150km on Strava)