The weekends trio, Damian, Magnus and me went down to Mullsjö on friday. Slept at the best place (my dad’s house) and got ready for the Saturdays Rapha 12 Hills. All on Specialized Tarmac of course and me and Magnus matching in Glassigt kit 😀

Rapha 12 Hills is a ”race” around Jönköping by La Lepre Stanca and Rapha with 12 climbs riding in teams of  2 and stamps on top of every climb. You can do them in which order you like but we did it in the recommended order and original route with one shortcut and one detour that almost went as fast as the recommended.

Many rider that rode out from Spira in the masterstart including Hagen who took some of the pictures riding just after me:

It all started with a long gravelclimb where I had to step of my bike a little because it was so much people all over the road. Except that it felt good and me and Magnus pushed on well down to Huskvarna and got some company by a few others. Rode a bit wrong in Huskvarna but didn’t loose much until we got back and headed to the second climb. A gravelclimb that was really steep and I thought about getting the power forward and keep the grip of my 26mm Specialized S-Works Turbo tires. Rode alone in front of our group so was easy to see the right lines. On the way down from their I had an average of 70,6km/h for a 1km, fast bike 😀

Then it was time for Norra Klevaliden. A climb with an average of 16% the way we did it. I’ve done it many times before but was long time ago and not with a single 46T chainring in front. Felt massive and 46-28 was hard, went all over the road to make it easier in the end but did make it without stepping of. stamped and waited for the rest of the group:

Me and Magnus continued towards Kaxholmen and found Philip and a couple of other guys from Malmö. Rode up to Gestra together which is a really nice but straight climb with a magnifique view:

The 5 of us rode together down to Huskvarna and met a lot of riders on the way down, pretty cool. We rode pretty easy but with good pace, 40km/h in average down to Huskvarna and a little over 30km/h through Jönköping along the beach 🙂 Felt awesome to ride with ok pace and with nice people. Rode up Prinseryd that was easier than I remember and then to Ebbarp. That climb was hard, straight and hard. And met Ricky from Rapha on top:

Great pacing towards the next climb:

The last one before the lunch/coffee break was long but knew about it and not so steep. Felt good and I could keep a steady pace with one guy on my wheel that missed the view 😉

No pictures from the coffee break but we took it easy and when rolling out with got a lot of company and was around 20 guys traversing to Bottnaryd and Mulseryd. Fredrik from Sumo took a great turn at 40km/h and we dropped more that half of the group, including his teammate so he dropped to his teammate 😉 Also dropped the Musetteguys there.

6(?) riders left and the pace was good and everyone took their turns, some more than others. Fredrik and some others came back to us and at Mulseryd we was a good group coming up to Emil and Peter who took a short lunchbreak.

A long climb or uphill to Mulseryd which I hate in a way, feel too weak to ride hard uphill for 8km. Back down it went better and Magnus pushed on well. He may not be as strong as me uphill but stronger on flats and downhill, great partner.

And we hit the gravel again and a gravelclimb I missed, tried to take it easy and didn’t go with Emil on his ”attack”. Stamped and waited for the rest before we sat of to Taberg and the climb I had been afraid of since Klevaliden.

Great work in our group and the speed was good.

Then it came, the climb. Is said to be 7% for 1,2km but when it gets steep the last half of it I was ready to step of my bike many times and walk up. It was super hard when the gradient went over 20% but I did it, all exhausted. 691Watt average according to Strava, 170 in average heart beat so going on power.

The downhill was nice and Tabergsdalen is very easy. Up Georgslid I had done before. Knew it was steep but not so long. But it was way steeper in the beginning than I remember, like a wall. Came up, almost cramped on the way but was okey. Waited for Magnus and then we rolled easy to Jönköping. Took a wrong turn as I used my head instead of watching my GPS 😉 Lost so much time so the others got just ahead of us and we were back together.

The last climb felt easy and was happy to make them all. Back down to Jönköping city and full speed over the bridge to Spira. We did it and I was in the best team (if you ask me). We didn’t win but we had a great day in the saddle.

Todays favorite gear and highest average for an kilometer.

And my awesome Tarmac. Some may say the Tarmac is just boring allround, some would say 40mm high wheels is nothing. I would say the Tarmac is the funniest bike I’ve ever ridden and the Roval CLX40 makes the ride feel like cheating. Rolling so well with great comfort.

Love this type of rides. Asphalt and gravel on a racebike. With lovely people with racing taking not too serious. And hopefully more pictures from this to share soon 🙂

Map and stats how I destroyed my legs: Strava

Rode with La Lepre Stanca this morning, a bit early as we started at 7 o clock but survived. Many small nice roads and great company, maybe with a bit too good legs 😉 My legs missed power so hard in the uphills.

Started with 7 riders for the first hour and a quarter then we splitted into one group going back to Jönköping and one group going longer. One guy left a short bit after remaining was my, Henrik and Tomas. Great roads with this one of the boring parts (easy to take a photo on a straight road) 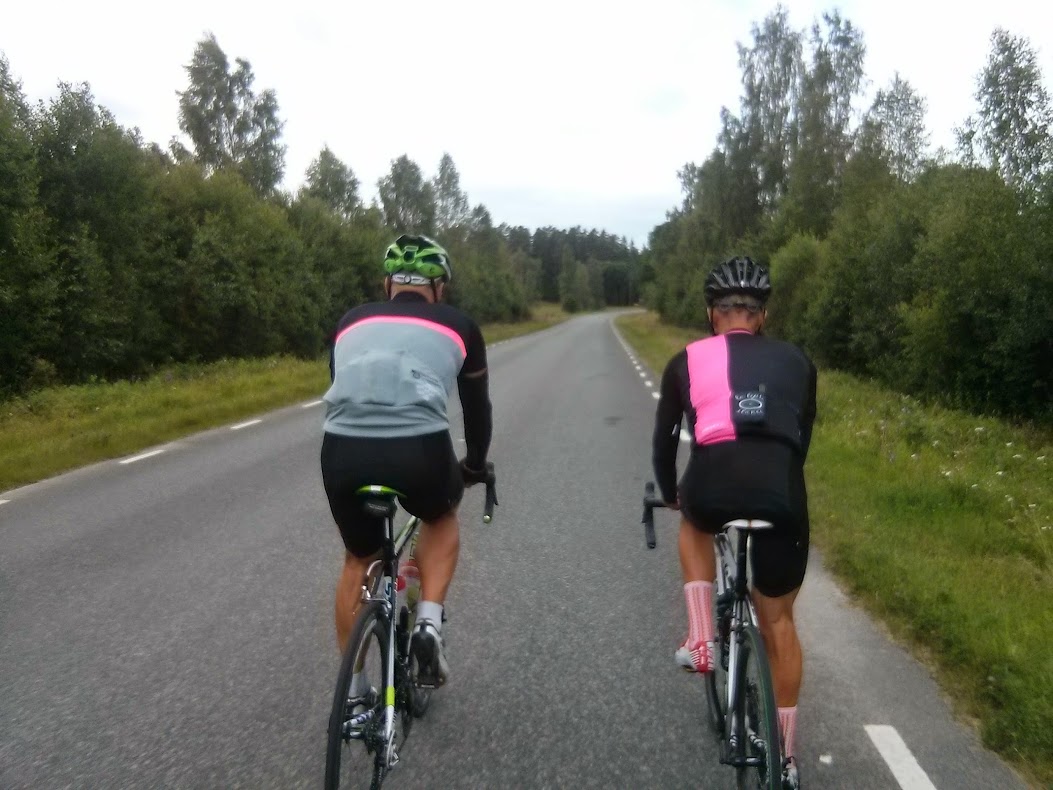 2 SuperSIX Evo and my on a Madone, would have been funny if I kept my Evo too 😉

Map and stats of today with hard legs: Movescount

Think it will be a rest day tomorrow as I’ve ridden 5 days in a row, a lot for me.

Feels a bit sad that I missed this ride yesterday. Seemed really nice or what do you think?