2 weeks ago, my first CXtraining on my Super Crux 😉 It was heavy and with Terra mud tires. I was new to the CXcourse. Did laps around 5.30.

Today 2 weeks later with 640g lighter CX, faster tires with Tracer in front and Trigger rear on a course that got some rain on and with good grip (mostly). My laptimes are the same 😦 the starts where better, everything felt better. Rode 3 heats with 2 laps each as earlier. The 3rd heat ended with a sprint with a guy behind my that wanted to pass but never came past, was really hard but fun. 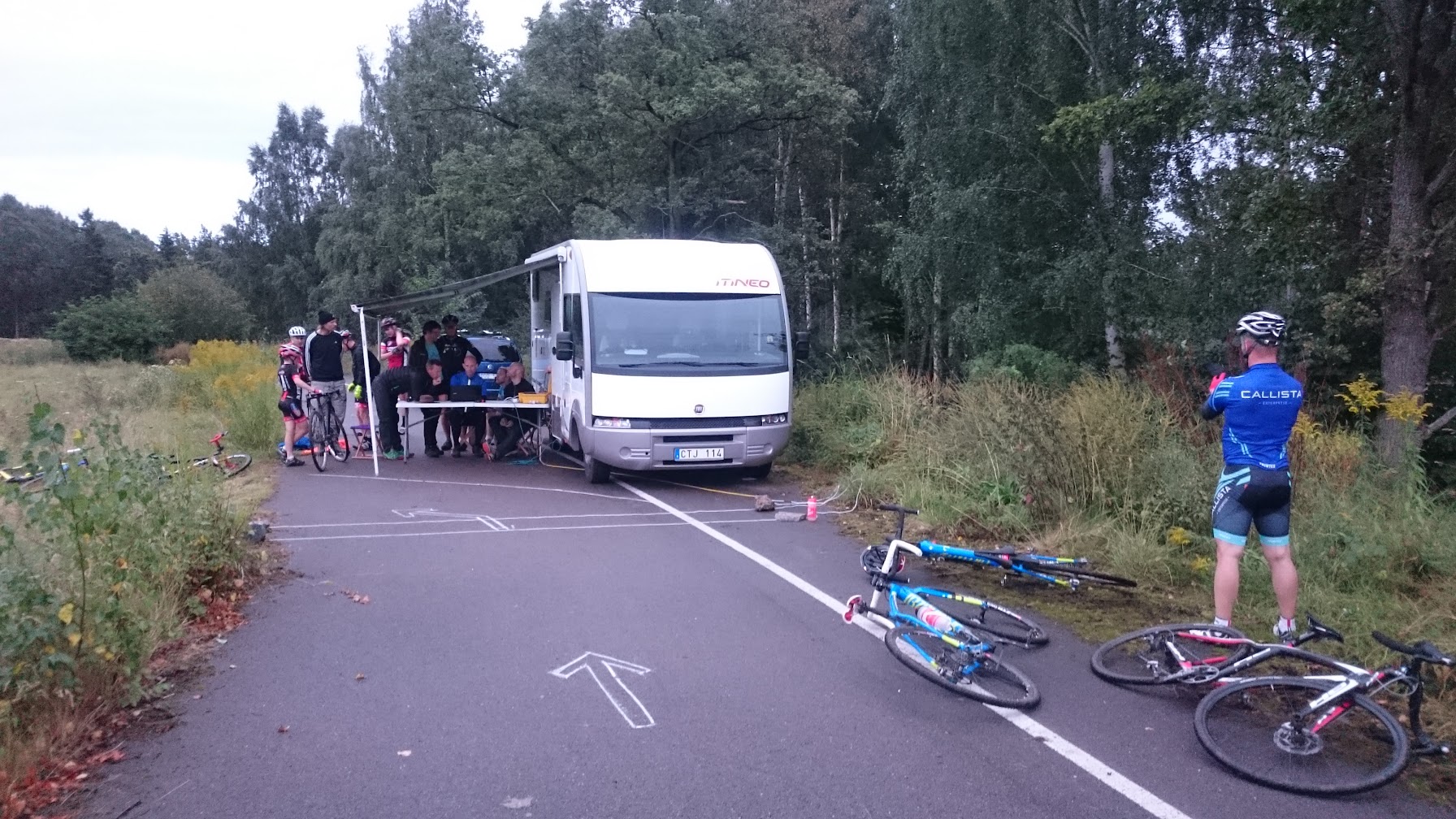 As usual I think I was the fastest with clinchers 😉 maybe that’s the problem. I need tubulars to go faster. And I need to find my CXpedals a.k.a Eggbeater 4Ti.

Maybe you will get more pictures from today as we had a guy working as crowd, starter, race leader and photographer 😀

I’ve got friends who can convince me easily, Christoffer is one. A customer and rider in CK Valhall’s elite team who is a nice guy that has started to ride Le Peloton sometimes. He asked me yesterday if I would ride today. My plan was to ride mtb with Jaime and Patrik but an hour of full speed and pain felt like a better preparation for sundays Lida Loop and when Kalle who owns bikecafé Le Mond asked too it was decided.

Borrowed the Roubaix S-Works Red Disc at work and put the alarm early. Rode and met up with this big group: Felt ok in the beginning and up to Fisksätra. Tried to be in a good position up the climb when we came back to Saltsjö-Duvnäs and to the roundabout in Ektorp. Then up to Nacka Forum I got impressed. The peloton was pushing, was floating like an engine. No thoughts of slowing down, just pushing. That feeling when it just pushes made me smile.

Good position through Sickla and then another hard part starts up to Hellas. Lost a couple of meters in the beginning but Christoffer came up and pushed me back on wheel before he continued forward, thanks 🙂 But after Hästhagen going over red I felt I just couldn’t go any harder no matter how. Got dropped!

Felt like shit and rode alone to Älta, just 34,7km/h in average Sickla-Älta instead of 41 before a second group that got dropped earlier caught me. Rode with them and caught 3-4 others before Flaten. Tried to work together to minimise losses and it was hard.

Ended with my 2nd best time on the long segment on Strava, 37,7km/h in average which I have to be happy with. A thing to notice is that after the sprint in Fisksätra it goes easy for a kilometer but still so high average. 😉

To Le Mond and got breakfast from this guy, Kalle: 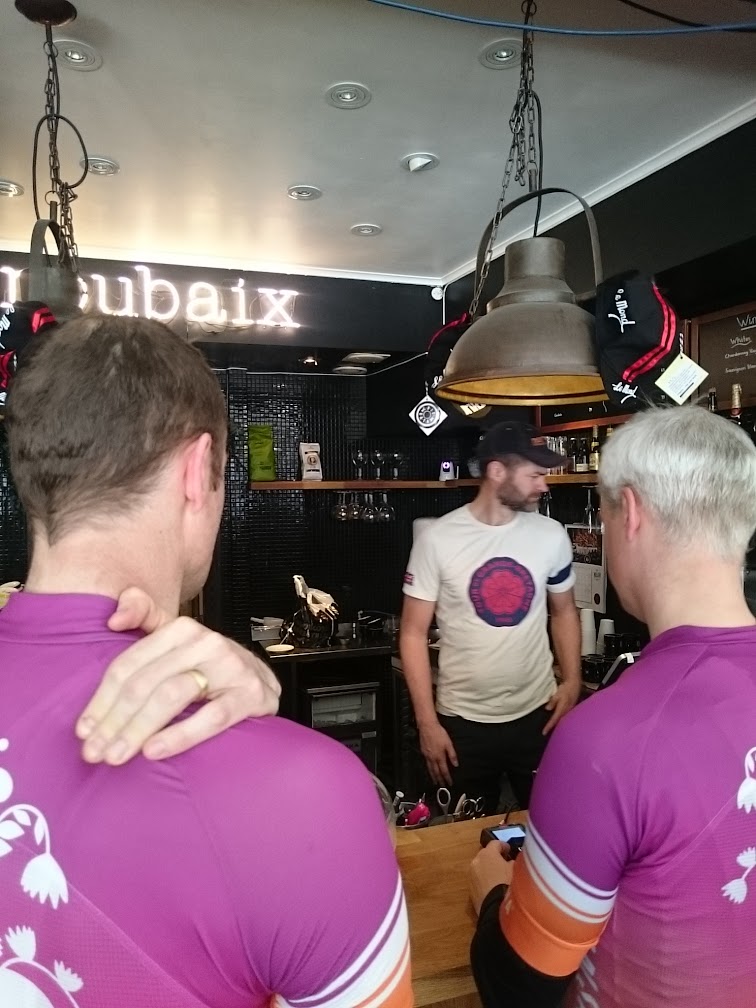 Nice time in the sun chatting 🙂 Map and stats: Movescount

Me and the bike: 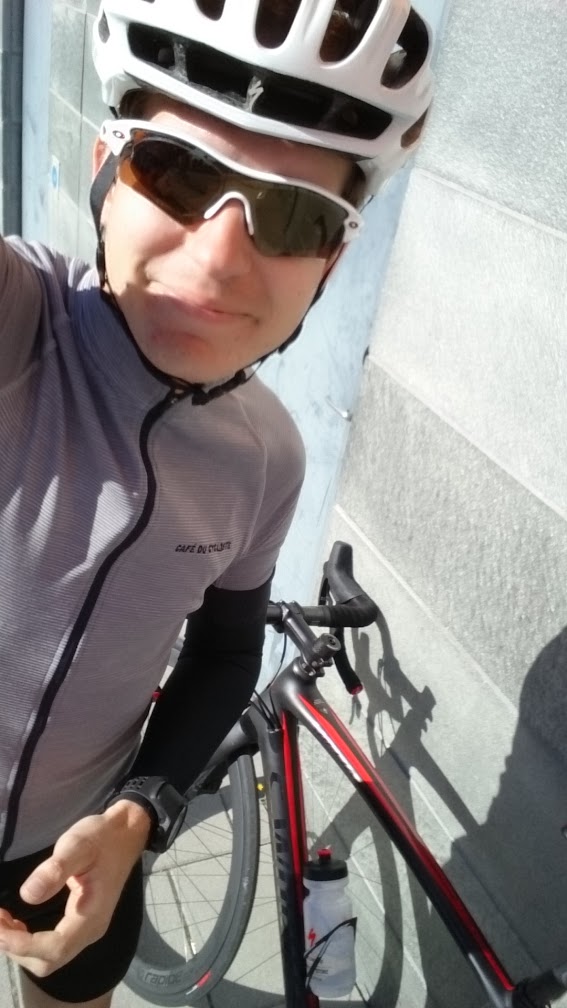 Then some time in the sun outside work with an espresso and one of our new neighbours AG Trading (POC, Fizik and so) 🙂

A lot to do at work and while not riding any mtb, neither did Jaime or Patrik it was talking about that half day. Patrik had talked about showing his hoods Gömmarn. Jaime and Jessica went to Hellas after work while me and Patrik did pick up my bike and went to his place to ride some new trails for me.

Found a mirror that was for preride selfies so took one 😉 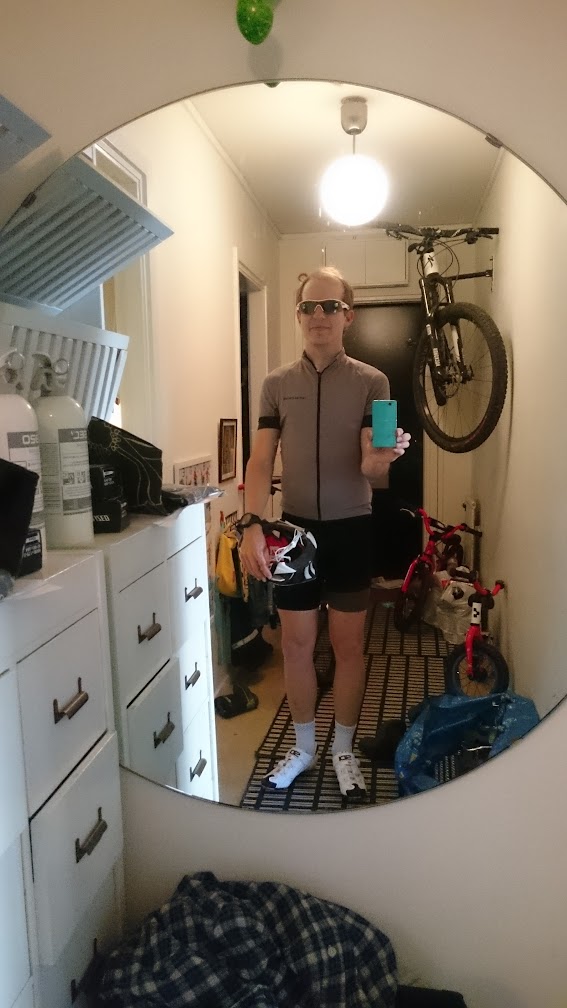 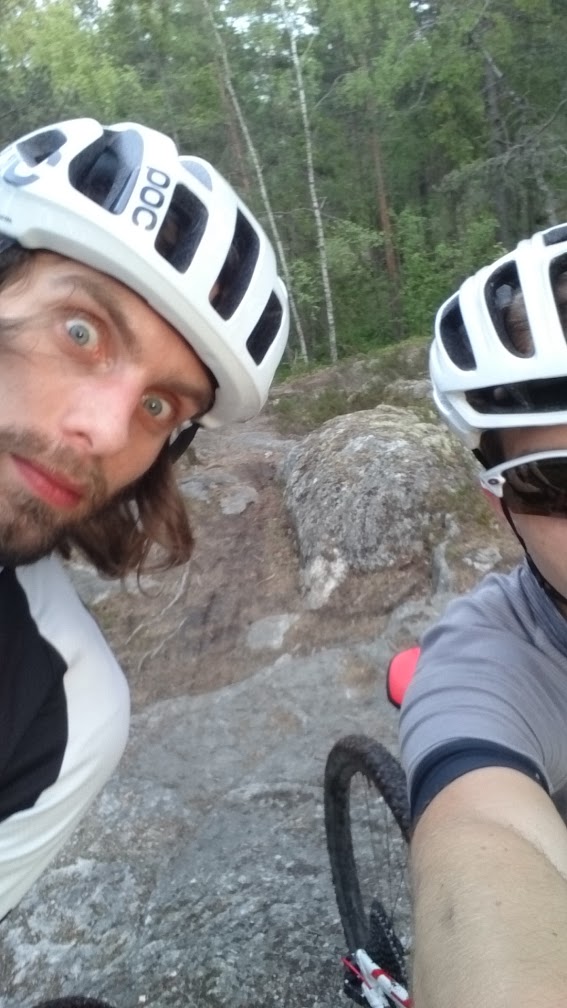 Then I rode home and felt that I wouldn’t touch a bike for the rest of the day. Hard but fun in the sun with great friends 🙂 Only the Holy Spirit can beat that 🙂

Map and stats from the evening: Movescount

Step 2: Decide a time and place to meet

Step 3: Go out and ride with your friend(s) on some nice trails in the sun: 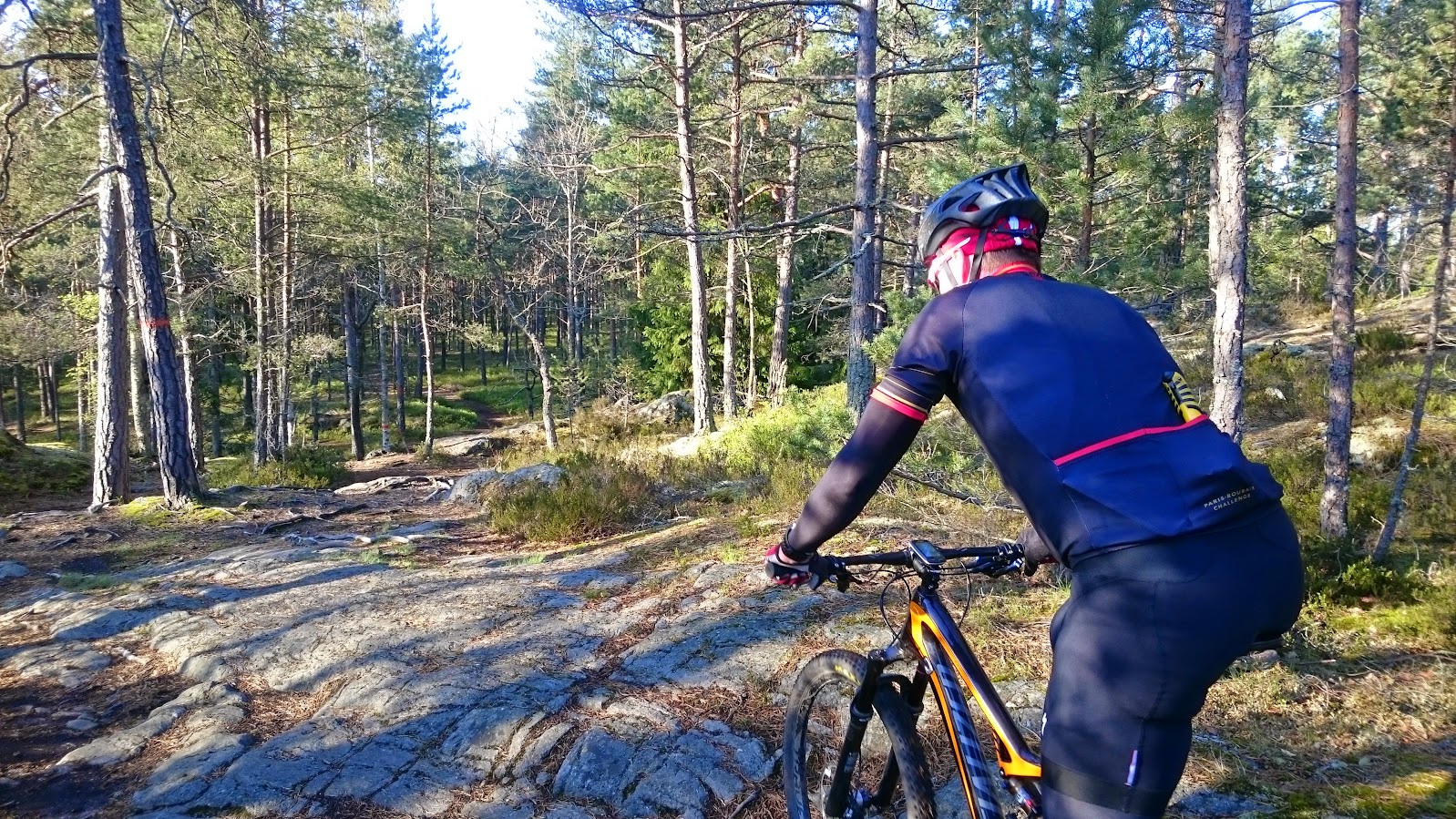 Awesome morning today with some hard training. Magnus had a plan of going 5 laps around a 8min track. We did a masterlap and then did 4 fast laps on some fast trails, some technical places, a ocuple of fun climbs, a lot of roots on sideways. When it’s trails and weather like this you don’t care when the heart rate peaks and you slip and slide on the wet roots from yesterdays rain, you just smile.

Tried to be new school today too with my new kit from Specialized. Atlas XC baggy pants and jersey. With a SWAT bib under with pockets. Great concept when you want to be cool, don’t want to bring a backpack but have things with you 🙂 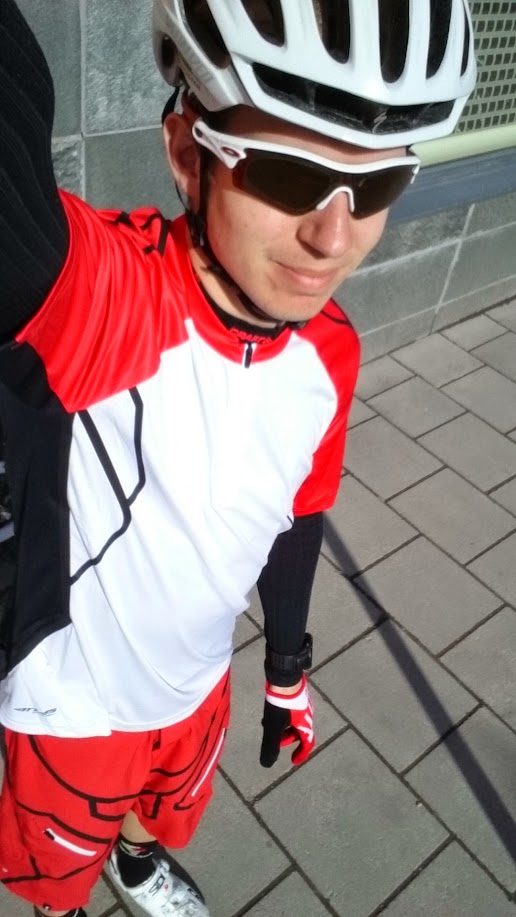 These clothes worked great and felt great for mtb, even going fast XCstyle. The thing with them that felt wrong and according to me was wrong was when I left work this evening and headed home with my roadbike. Fully matched kit including shoes (and cleats) but not so great fit with my bike 😉 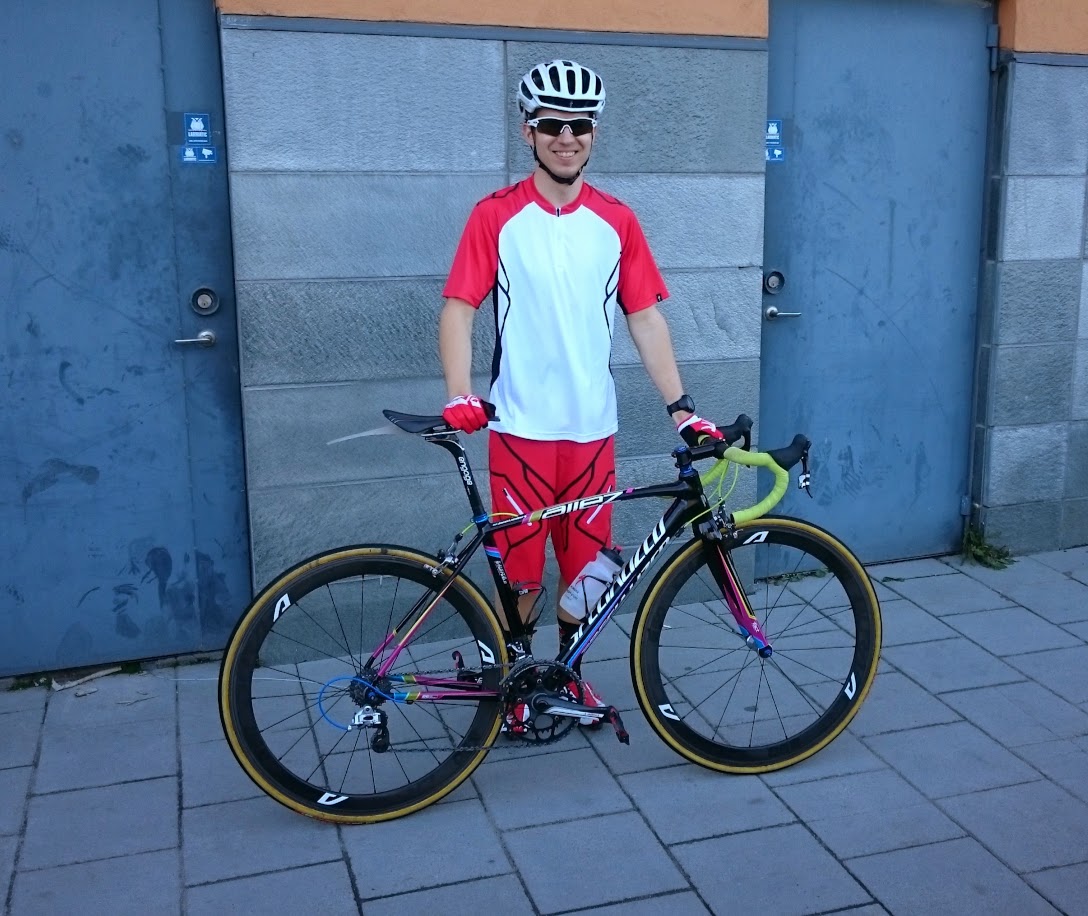 Didn’t felt fast either so roadbike=lycra (and white socks).

Map and stats from our morningride: Movescount

As I written before my Camber is awesome,  it’s flying. But there has been one thing, when using the smaller cogs on the cassette there has been a sound like once a lap of the chain. Thought it was a stiff link or something but today after I washed my bike and checked the gears at work I found it. One ring that rolls against the cog and chainring in the chain was broken and lost. That’s why it sounded and felt strange. So instead of a KMC X11 chain I mounted a Sram XX1 chain instead.

All ride with Magnus afterwork the bike worked flawless 😀

Rode a bit on some small not so well used singletracks for a bit more than 20min today before we rode back to Hammarbybacken and Magnus planned 10 1min intervalls with 2min rest. 1min is a odd time, it’s not so short so you can just sprint up nor it’s long so you can find a pace and go at that. Best in the beginning of some intervalls where I stood up and accelerated, feels like my bike just flies, nothing except me who stops it. Let’s just hope my bike will get satisfied with me too going faster and not just me satisfied with it. Love both ways 🙂

Rode with my lovely Gelatosocks today. Thought of taking a picture with them and the new chain but missed it. So instead an old picture from last year:

A lot to do at work today (yesterday as it’s not saturday anymore) so finished a bit later and with a planned dinner with a show (great one) at 18 we where a bit short of time riding mtb. Sad but true. But the good thing is that the small half hour me and Patrik got after work was really nice on super trails, in perfect spring weather and with a perfectly working bike. 2 climbing intervalls too, need to ride up Hammarbybacken more often 😉

Us today, Patrik with the new Specialized Ambush helmet: 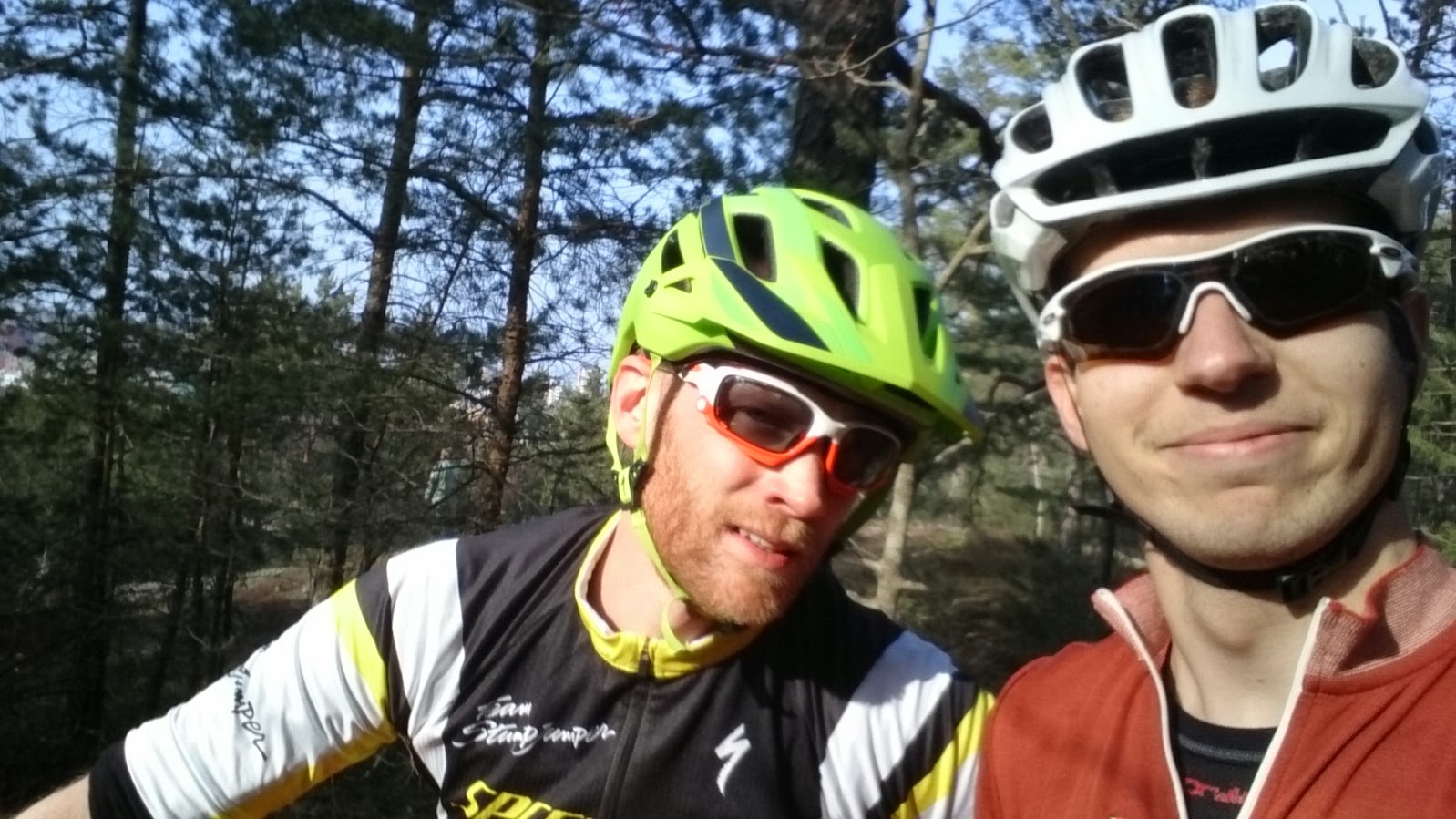 And here is Patrik showing his bermskills: 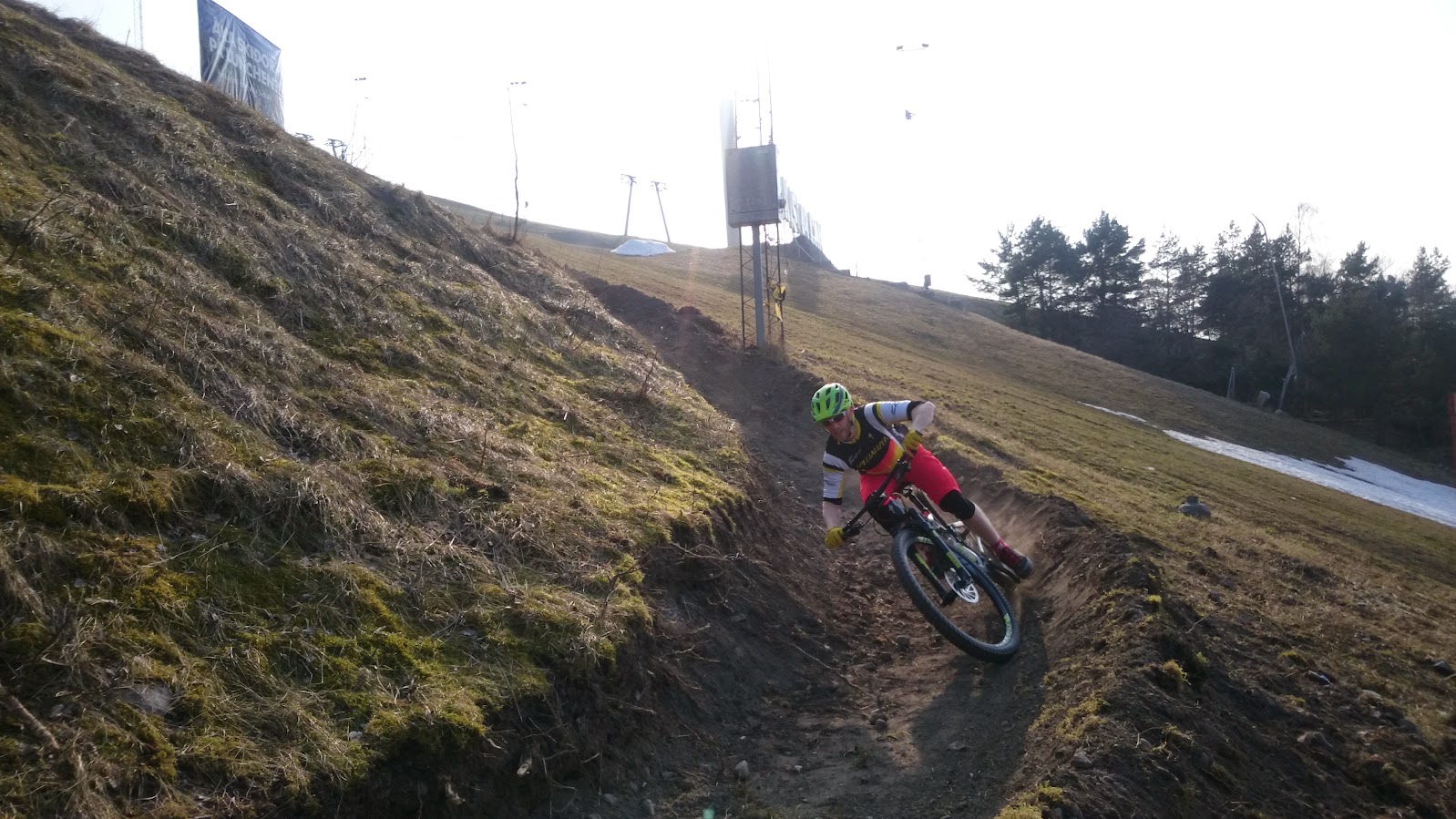 And my new shoes, felt great 🙂 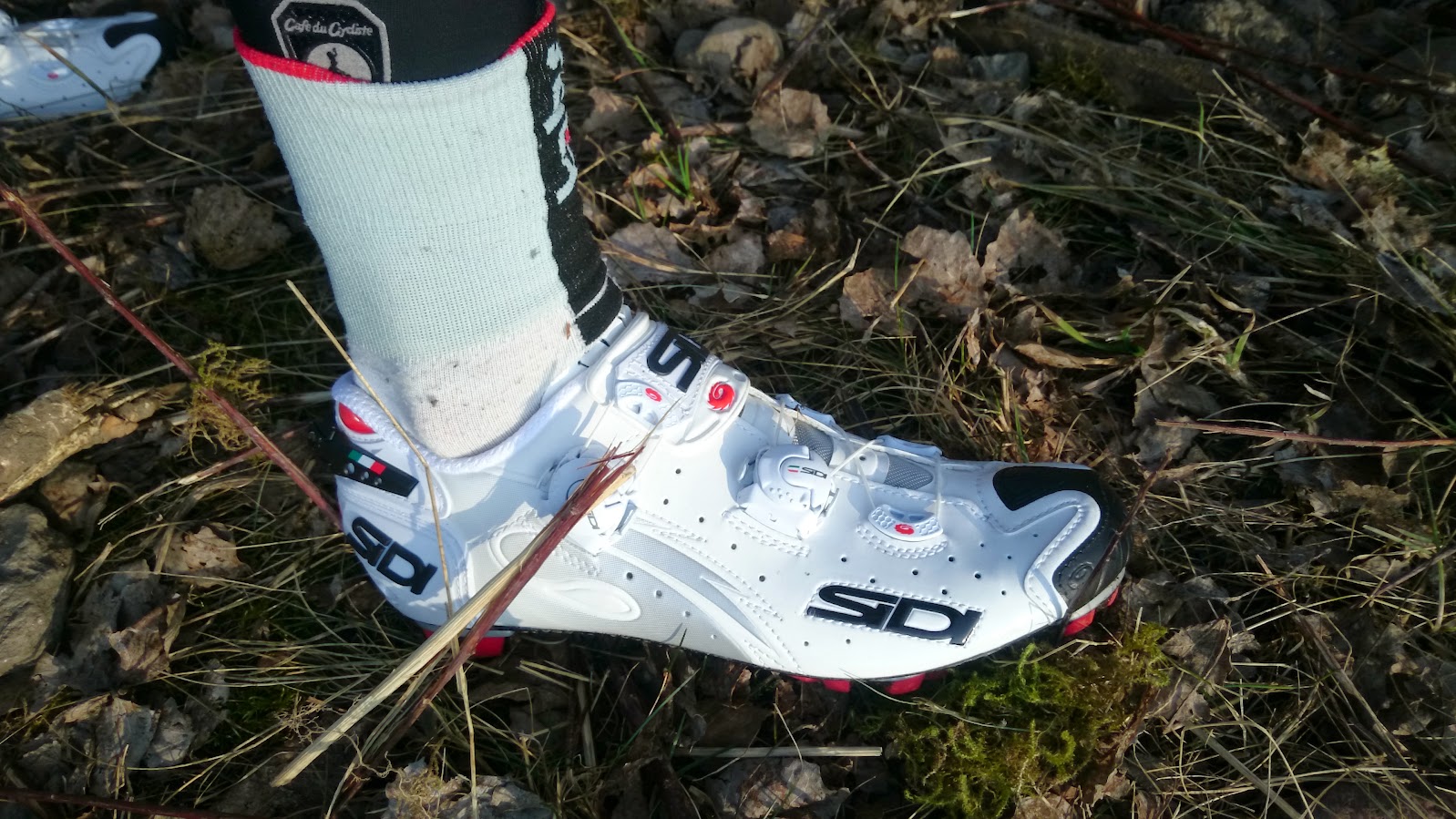 Some shoes fit better than others, feet are different and so are shoes. My Specialized S-Works XCshoes didn’t fit my feet. So sold them after putting them on a scale: 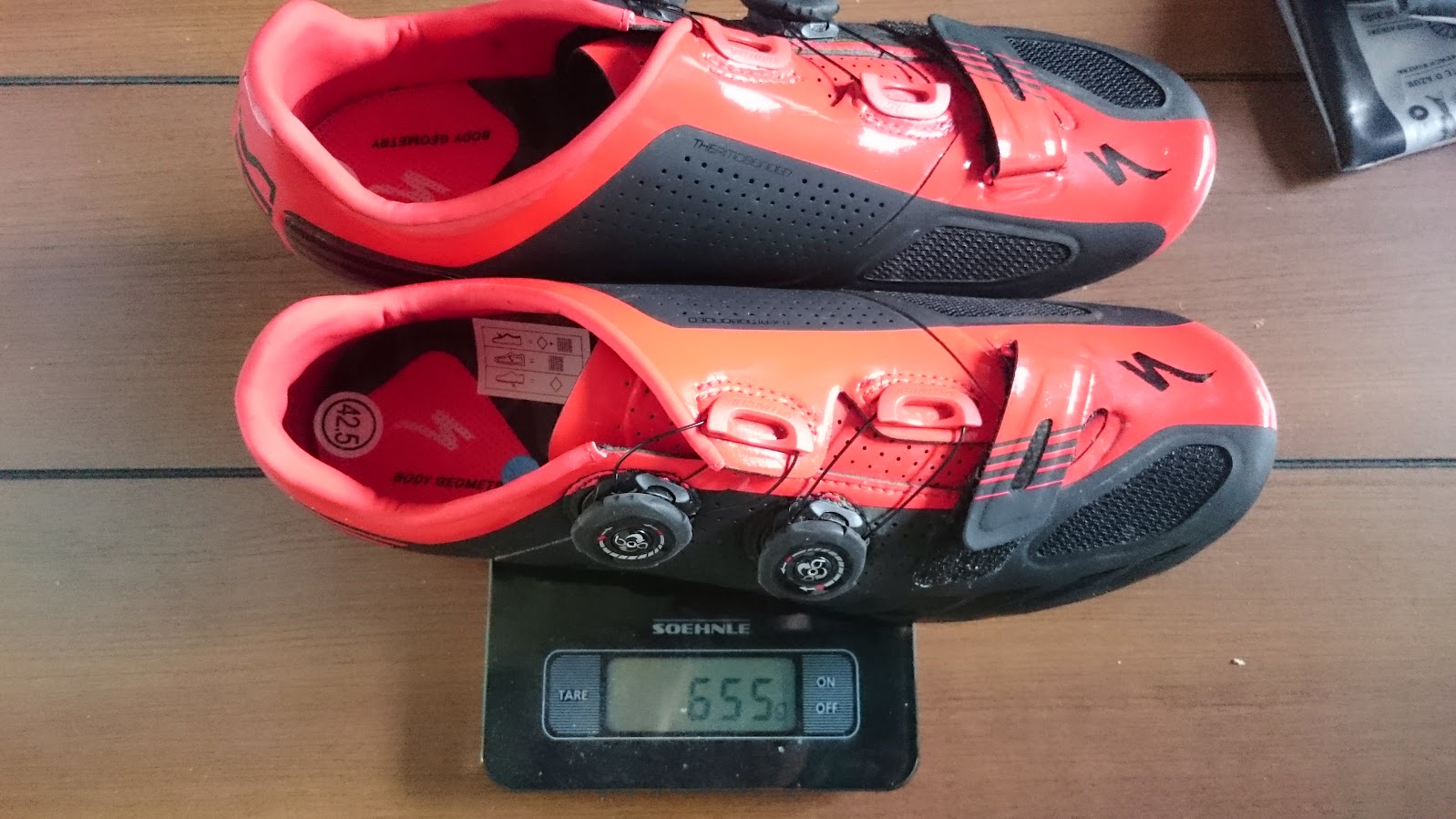 655g is hard to beat and don’t know if so many does. Sidi Drako doesn’t: 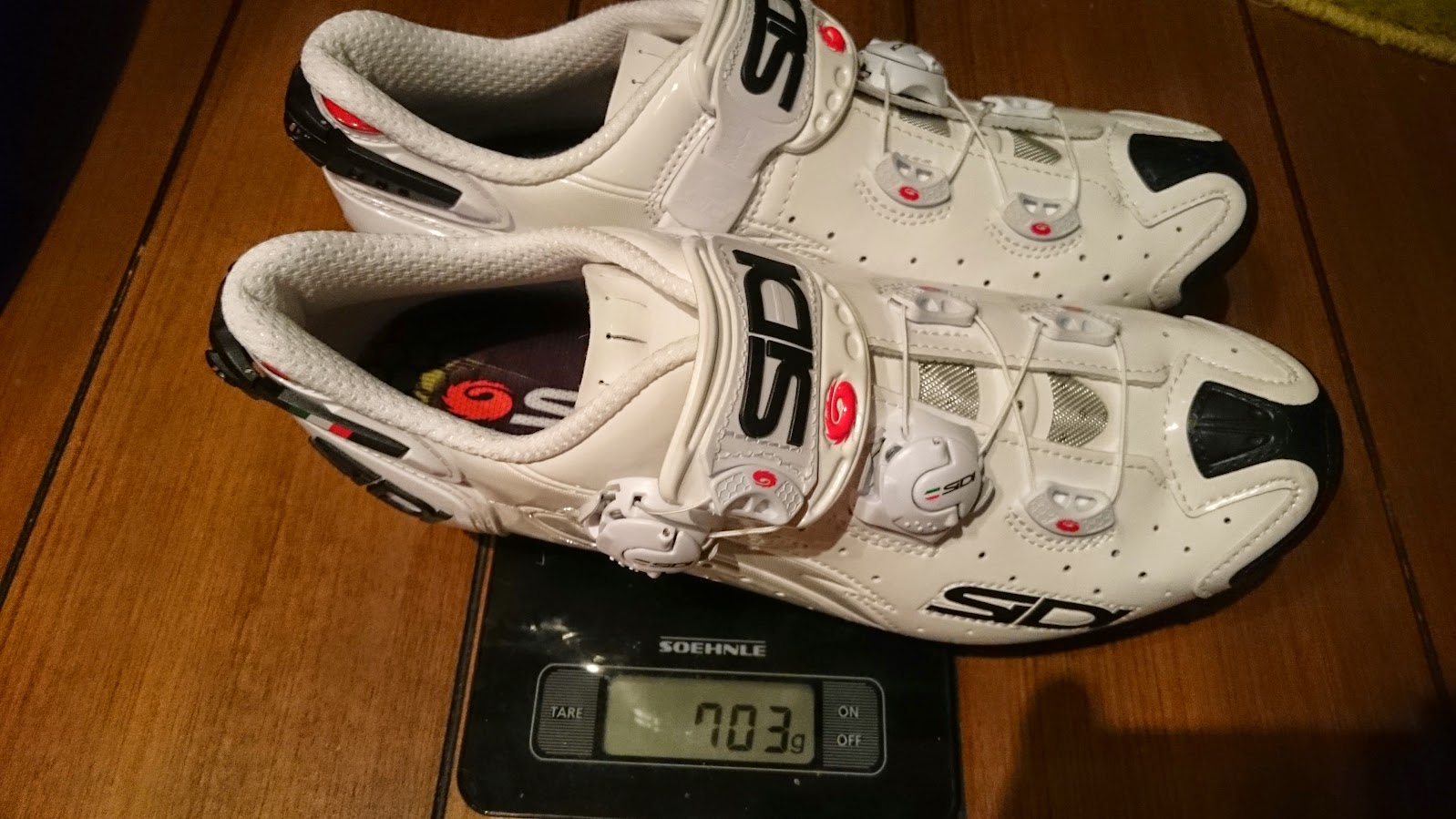 But they fit my feet and feels good. They are handcrafted in Italy and got all the Italian stuff you like. 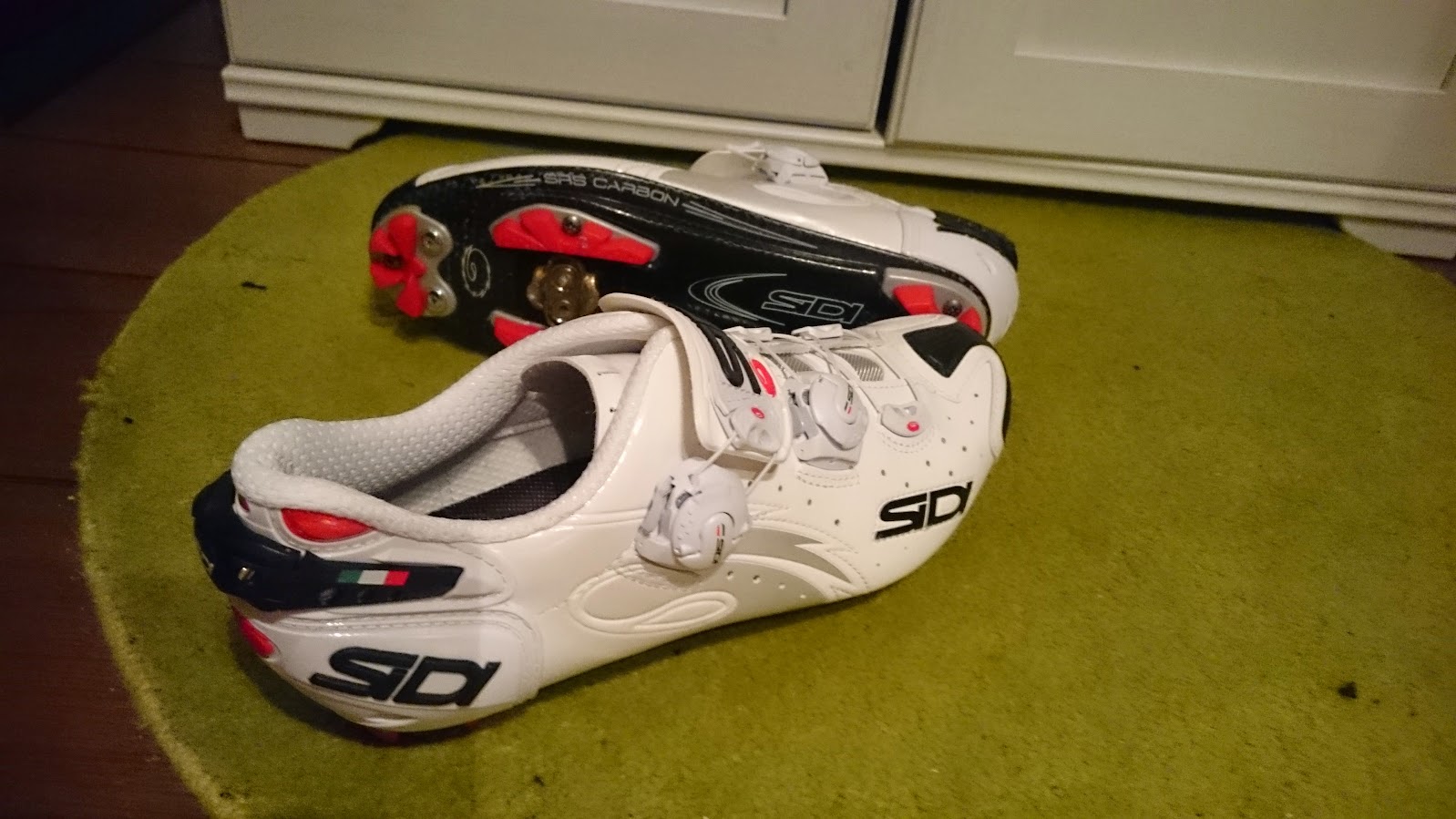 Will use them for real on saturday is my plan. Couldn’t resist going all white 🙂