Until you can do as me and watch the documentary from Brooklyn, sadly just from the men’s racing:

My best cyclingday last year was RAAS, wrote about it here: RAAS15

So for this year my expectations was high, maybe too high and the weather didn’t seem to be as good as last year either. This year I knew more about the ride, I knew more people and it was really fun to come to Musette where the start was and meet everyone, including the new owner of my old Allez 🙂

The Ride group started 1,5h before us so just the Racegroup left when I came and a lot of nice people to talk too. And a lot of cool bikes to have a look at, but just one S-Works…

Then the Race started with a masterstart by Emil and Patch leading us out to Dalby:

With the big group rolling behind waiting for the race to start:

Nice roads, nice people and great tempo made it great. Until around 60km where we had our first crash. A Skodaguy sitting in front came with way to high speed into a 90° corner and lost his front wheel. His bike just slided into a stonewall with him behind with at least a broken fork as result and his race was over. 😦 Not so long after we had a bunchcrash when Carl hit the braking wheel in front of him and we where 3 you came down. Carl got bruses and a couple of broken spokes, Ola got a dent on his Allez (my old) and I who was the last one down just got a couple of scratches on my leg and bartape.

Then we had lunch and met Therese from Rapha in Vitemölla:

On the way back it was some heavy legs in the beginning but we got up to speed in the headwind with some attacks that didn’t worked out. The famous ravin which is a ”gravel” road downhill with really loose sand this year the group got split up a bit but gathered in Blentarp or a bit before that again where the last short stop was.

Then Even crashed with a dear, didn’t see it but seemed not to be to hard as he was riding like before afterwards. Up the long climb and then it feels like a never ending end. The road goes down, and up, left and right and you never really know if Malmö is getting closer. And the rain began, was a lot of rain hurting our sour bodies. Happily it was warm so freezing and no need for extra clothes. And suddenly people started to ride fast, the group got longer and Hagen was up front sprinted and took the win! Was so worth it as he seemed really strong the hole ride and no one seemed to be a match for him.

And we rolled into Malmö, to Media Evolution and the afterparty 🙂 The ride was to an end

My bike was perfect, my body worked good until 162km where I had a dip and it was really fun 😀 Patch did a great job this year too keeping the event awesome 😀

Today at work we talked about how stiff and cool Allez Sprint is and how soft a Colnago C40 should be. It’s almost tragic that the Specialized Allez Sprint isn’t available in our market 😦

But I found some nice inspiration for building my Colnago C40:

Wasn’t much of interest in buying my bike complete as I hoped for but knew. So now it’s for sale in parts. Help me fund money for next project.

With innovation it will bring us so much more fun. There are some comparing bikes just looking at the components when they aren’t as important as the frame. But there is always a budget, most often at least and that’s why Cannondale has lead the industry of high end aluminium roadbikes with their Caad. They made both Specialized and Trek keeping their alu frames up to date and even Canyon has got on to the train of a good aluminium roadframe, not just cheap.

So what to do when you pushed the limit of a regular roadframe in a material? Like they did with carbon, let’s go aero.

Specialized spent more time in the Wind Tunnel developing the Allez Sprint than the old Venge. It’s as stiff in the bottom bracket as a Tarmac and the seatpost is straight stolen from the Venge ViAS. A smartweld bottom bracket unit got the stiffness up and the weight down:

1160g in size 56 so when people talk about that aeroframes are heavy they had wrong in this case. Specialized went all the way on the Allez sprint and steepened the seat tube angle, lowered the head tube and got a little higher bottom bracket. All to be good in going fast around Criteriums. So it was perfect to add a Sram 1x drivetrain and skip the front derailleurmount too.

It was launched in the middle of 2015 it’s still cool. And still not available in the Swedish market which is a shame.

But it’s been upgraded. Now also available as a x2 version with front derailleur:

Can also look like this special for Chris Riekert at Specialized with Campagnolo EPS in the colour that maybe suits Specialized better than Bianchi:

(did you notice the ViAS handlebar?)

The bike I’ve ridden the most is up for sale. Got new wheels, tires, tubes, cassette, chain and bar tape in the end of last season and now it’s just hanging collecting dust. As my heart seems to dream of Italian things all the time I’m selling this beauty for an older more classic bike.

Price around 16000SEK. Send an e-mail to me at cerrol.jl (at) gmail.com for more info and buying. Can be this years best deal if you want a really good alu frame with very good components.

that was started with a fika at Magnus Johansson’s bakery in Hammarby Sjöstad:

I’ve been riding in hard conditions for a long time:

I’ve been trying to ride fast and it have really developed my rode riding with Le Peloton:

And I’ve been hanging around what has been voted as the best café in Stockholm, Cykelcafé Le Mond:

I rode some mtbraces with a couple of Keps Cup, Lidingöloppet, Billingeracet and Lida Loop:

I did the middle version of Ronde van Vlaanderen cyclo together with my friends Johan and Magnus:

I’ve been really got to know my best roadbike so far, my Specialized Allez. It’s come to the point where I no matter of feeling or weather just have been jump on it and felt like home.

I’ve got to know many many great people along the roads and coffee shops:

I’ve been riding more than ever with my idol Henrik:

I’ve done the ride of my life, RAAS where I actually felt fast:

I’ve been seen beautiful scenery in the middle of nowhere:

I’ve been learning how to take pictures that get many likes on Instagram, and sock style:

I’ve also been racing my first nationals in Cyclocross:

A small but great evening was the Le Roi de La Montagne, a small hill climb with style and power:

It’s been a magic year. So much fun, so much coffee 😉

It all ended on the other side of the roundabout in Hammarby Sjöstad with a breakfast after yesterdays Le Peloton:

Thank you all who made this year!!! I hope I spread some joy in your year too.

Happy new year and tomorrow I’ll tell you about my plans and dreams for next year 😀 Can it get even better?

There is many parts you can do better on a bike. Improve aerodynamics like a Venge Vias. Improve the weight like my SuperSIX Evo I had:

You can improve the fit of your bike with a BGfit for example:

But a thing you can’t improve on a bike is the geometry. The last thing you can change and then you change bike. 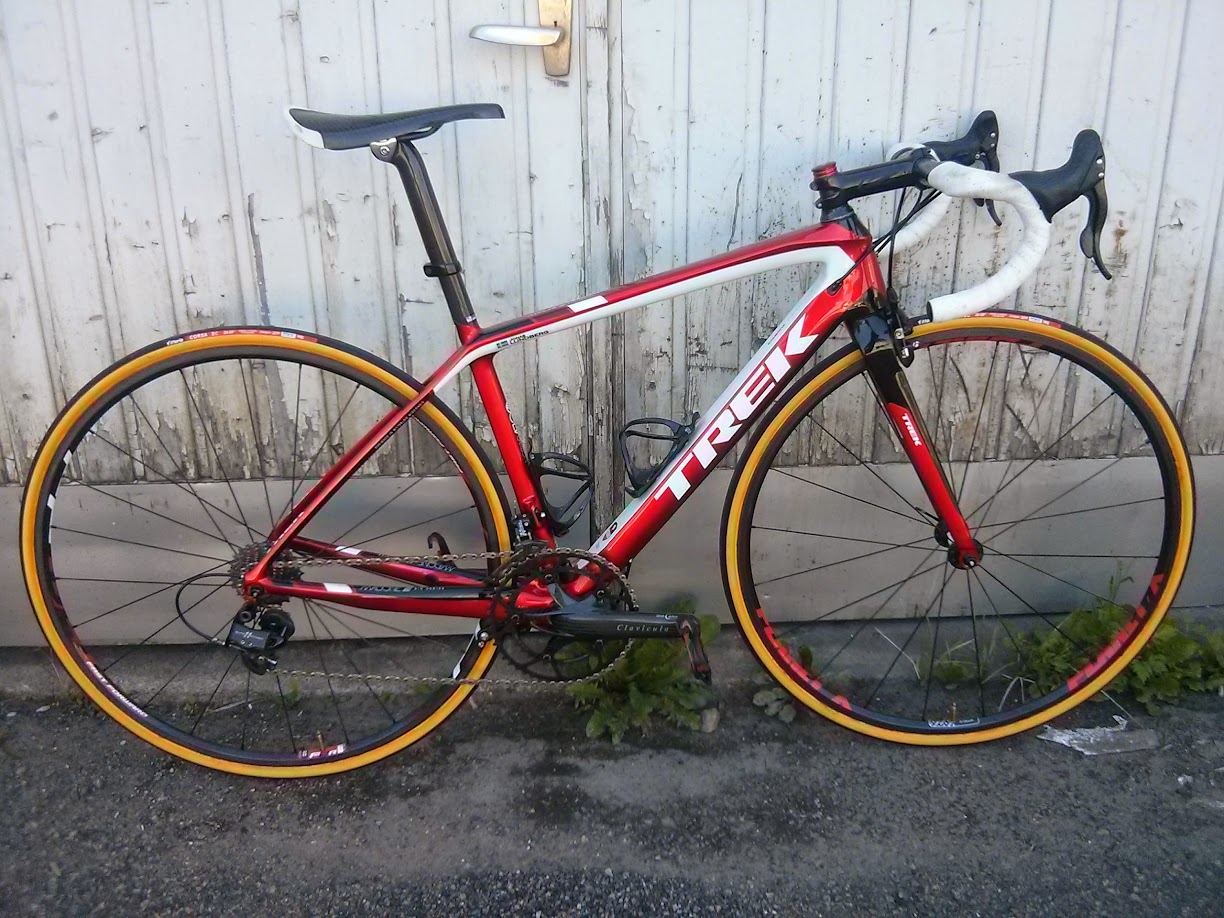 It was superstiff and it felt really fast, really fast. The biggest downside with that bike was that I didn’t use it enough 😉 but also the toptube, it shouldn’t make any difference but I felt it was too low.

And yesterday after riding my Specialized Crux cyclocross on road and a bit fast it didn’t feel as good as a roadbike. Because of geometry.

My Crux feels faster than my old Cannondale SuperX but they are pretty similar in geometry except bb height, chainstay length and the fork. Small small changes that makes a difference.

Cannondale have their Synapse, Specialized got their Roubaix as the best example. They are a bit longer, not as racy as a SuperSIX Evo or a Tarmac. People may talk about weight but it doesn’t differ so much if anything. The big thing is geometry and the small changes that makes the complete feel of the bike differ.

I believe that brands that have been on the market for a while with great success makes bikes that handles better than brands that just put their sticker on a cheap frame from China. There isn’t from nothing people talk about the riding feel of riding a nice Colnago for example.

Have you ever thought about geometrical differences between frames before changing roadbike?

Today I sent this beauty away for storage and to become the 2nd roadbike in my life. It won’t be used as much as before but it’s too good to sell and loose money on:

My Allez is the bike I’ve ridden most of all bikes I’ve had. It’s the bike I can jump on and feel like home and be able to ride for 7h without a thought. It’s been to Belgium, France, Denmark, Norway and many places in Sweden. It’s been used for more than 6500km. It has been awesome and I hope it will bring me many kilometers more when I’m around Jönköping visiting my dad and friends.

But I’ve tried better bikes and next years bike will be better and hopefully go even further bringing more smiles to my and others lifes. A bike that handles as good as Vincenzo Nibali’s bike did on todays Il Lombardia. Watch the last 17,5km here and enjoy the great action: