It’s about routine. If you ride every morning the same time the body get used to it and adapts. Our bodies do adapt more than we can understand and does all it can to be as good as possible, otherwise complain.

My body was tired this morning but I got up and out to Le Peloton. Thought of skipping it but thought again that I would be thinking of it the hole day. It’s better to start a training and get dropped than not to start.

4 Sumos with me and Emil missing out on the picture and 8 in total. Okey for a friday in wet November.

Emil sat the pace high and we tried to follow, two got dropped pretty early. And I felt like I would be too but hung on and we got a bit of rest  when Emil turned wrong in Saltsjö-Duvnäs 😉

Almost dropped before Älta like Michael but got back up. almost got dropped again on Flatenvägen but got up once more. On the last straight Emil dropped me and Claes. I tried to chase a bit but when Claes passed me I was all cooked. Survived with the help of waffles:

2,5km/h faster than on Wednesday feels good with studded tires. Maybe I can get fast sometime.

And to care about my great Sequoia with a very needed wash:

Map and stats from the morning: Strava

Yesterday I took a cycling shoe in my hand and thought, this was light. But it also looked slim and small.

I tried it on and it just sat around my foot. With great toe space. It was size 42 and I got a 42,5 S-Works shoe at the moment. So half a size smaller but fitted me perfectly. Perfect is the word to describe the shoe, the closest you come. You should try one before you buy a new pair of roadshoes.

So what about the weight? In size 42 with the  boa note still on:

208g and you see the paperthing coming on the shoe. Really light.

Will the S-Works Sub6 be as good or do I have to get a pair of these for next season?

Specialized really god them self a high-end name with S-Works. Cannondale got their Black bikes but you never mention just the name Black when you talk about their top of the line helmet for example.

Scott got their RC or is Premium better?

No matter if you talk about bikes, helmets, shoes or chainring bolts if you want it from Specialized you know that S-Works are the best. Like with handlebars.

the 27th February I got a S-Works handlebar for my Allez, 40cm wide and shallow bend: 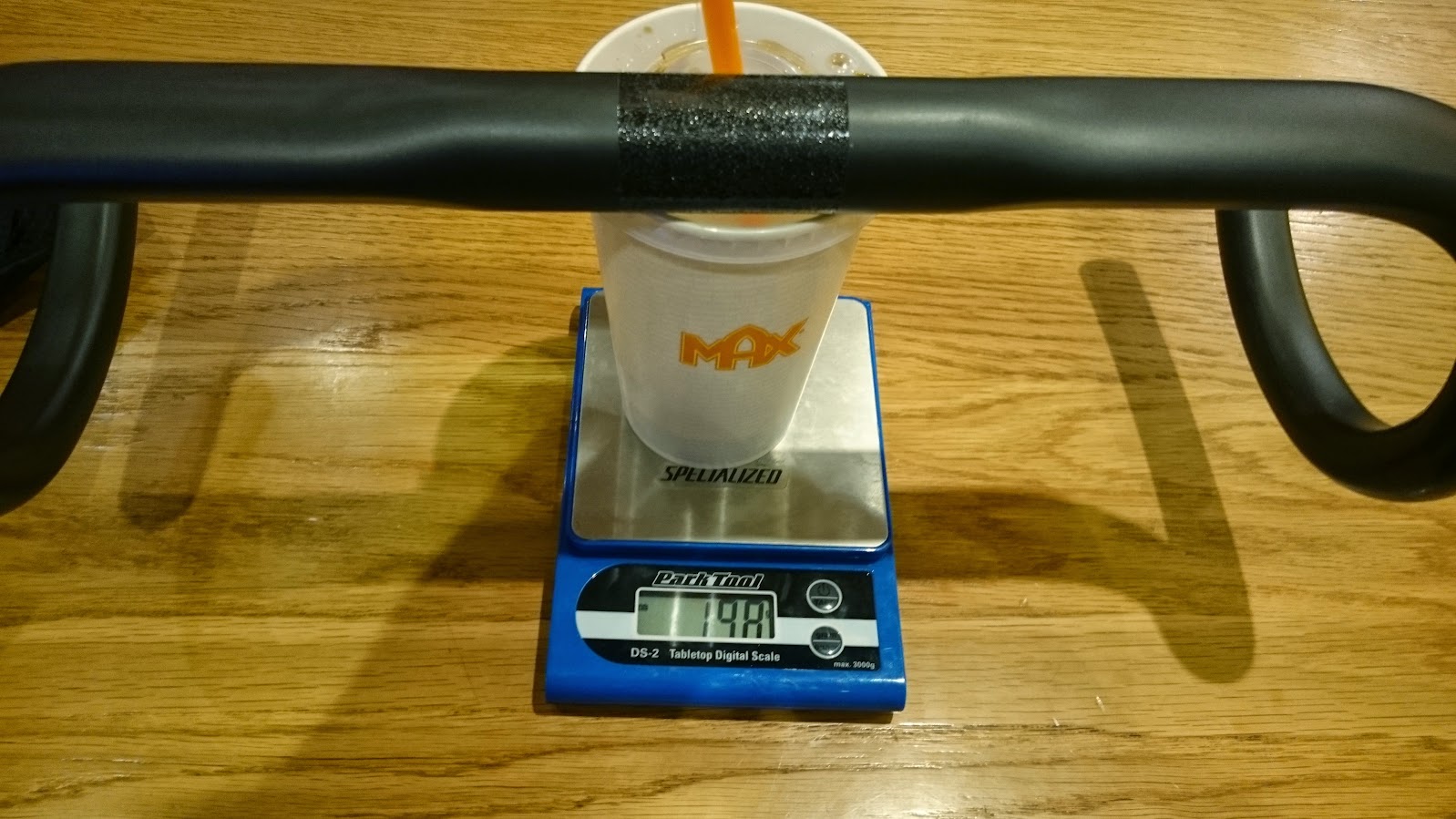 198g is pretty light but not the lightest you can get. Today I mounted a new S-Works handlebar on my cx. I would say that Specialized S-Works shallow bar or Deda Superleggera got the best shape on the market with their flat top that is rotated perfect for holding.

Back to my Crux. The same model as I got in February and same measurements, but far from the same weight: 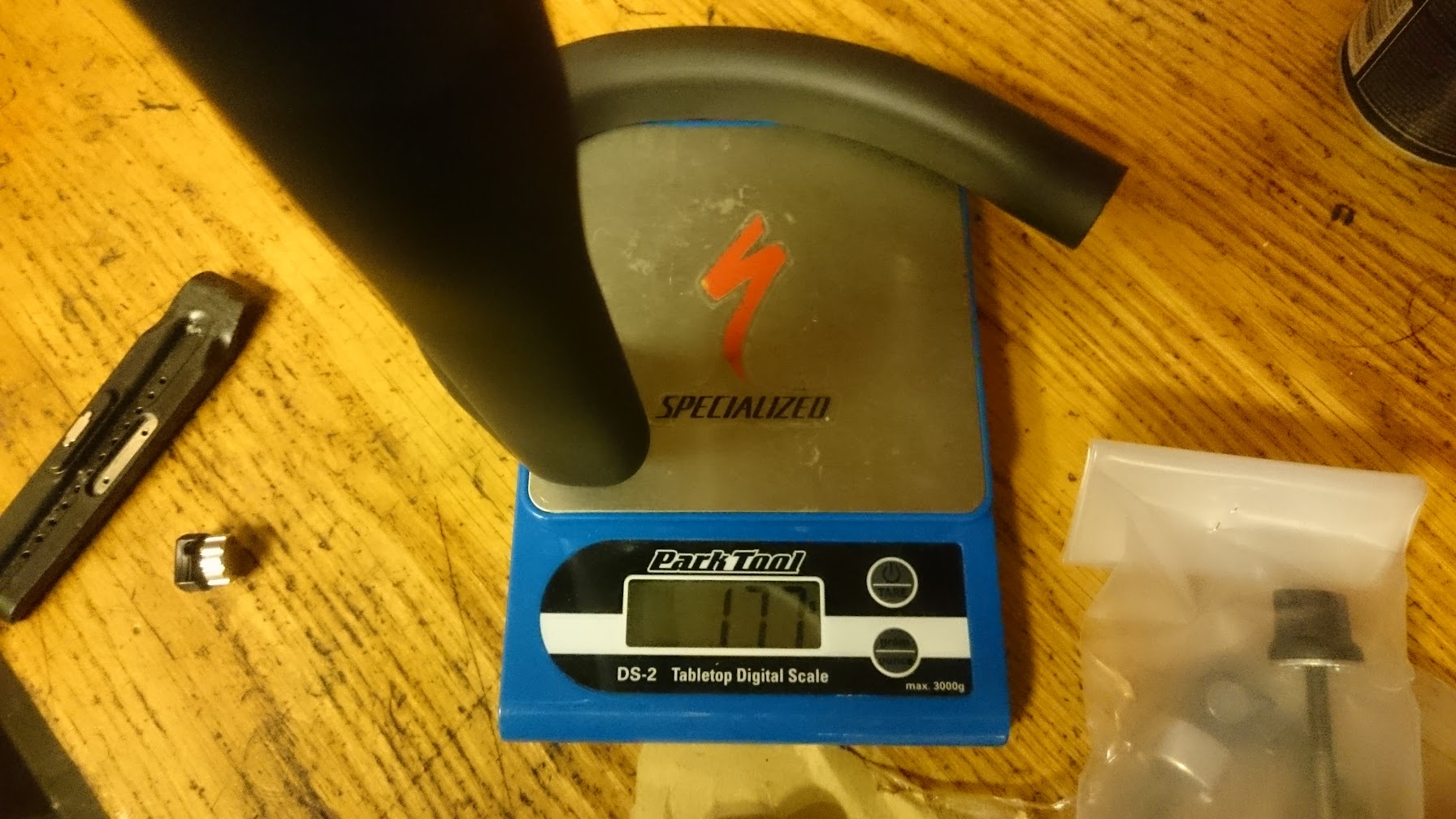 21g lighter! 21g! It’s in the same weight category as the lightest Fi’zi:k handlebar. Like Christmas for a weightweenie like me.

Ending the post with a bit more S-Works. We got the new mtbshoes today. Looks the same as the old ones but a bit changes in the opening that suits me so much better. Couldn’t have the old ones but the new ones fit me perfect: 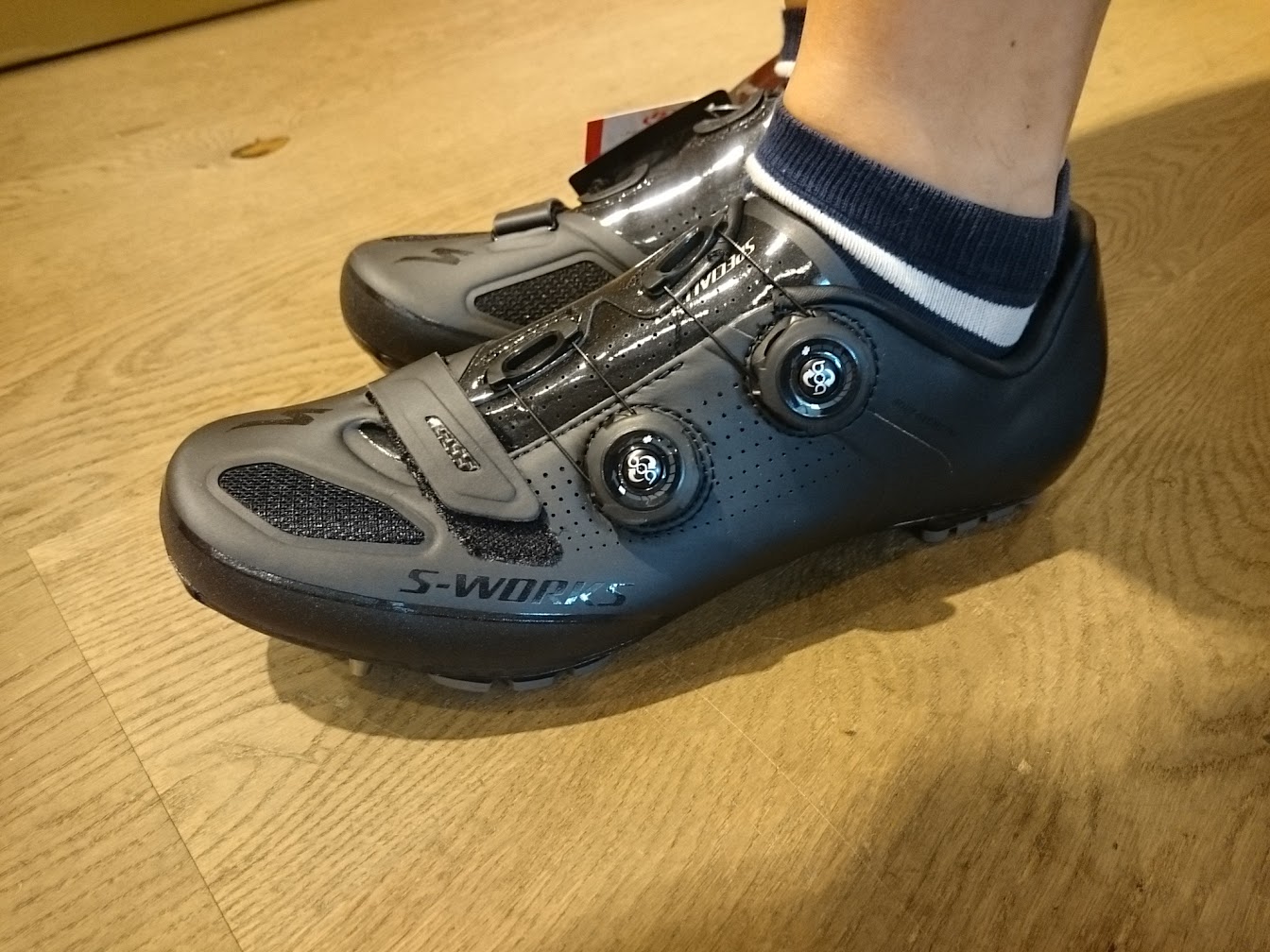 sorry for my low socks, good to work in, not for riding.

A lot of people this morning with the same goal: Ride fast to get breakfast at café Le Mond. 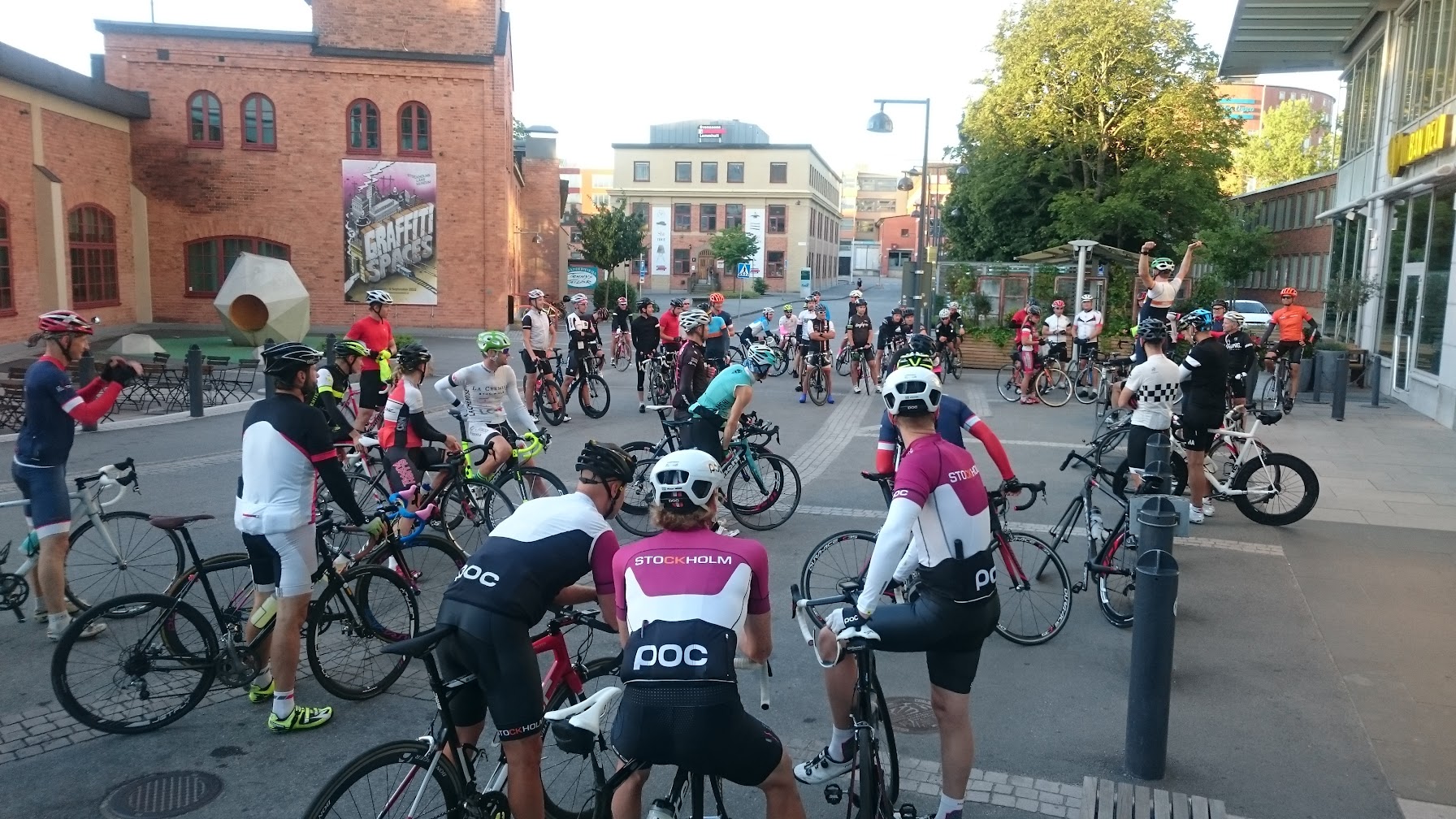 One Pro, One elite, some strong guys and then people like me 😉 Like usual it feels to hard and felt that I couldn’t hang on as I used to do up the climbs to Fisksätra. But managed to stay in the first group all the way and was up in the front and did some work when I could, or almost could if you ask Sara 😉 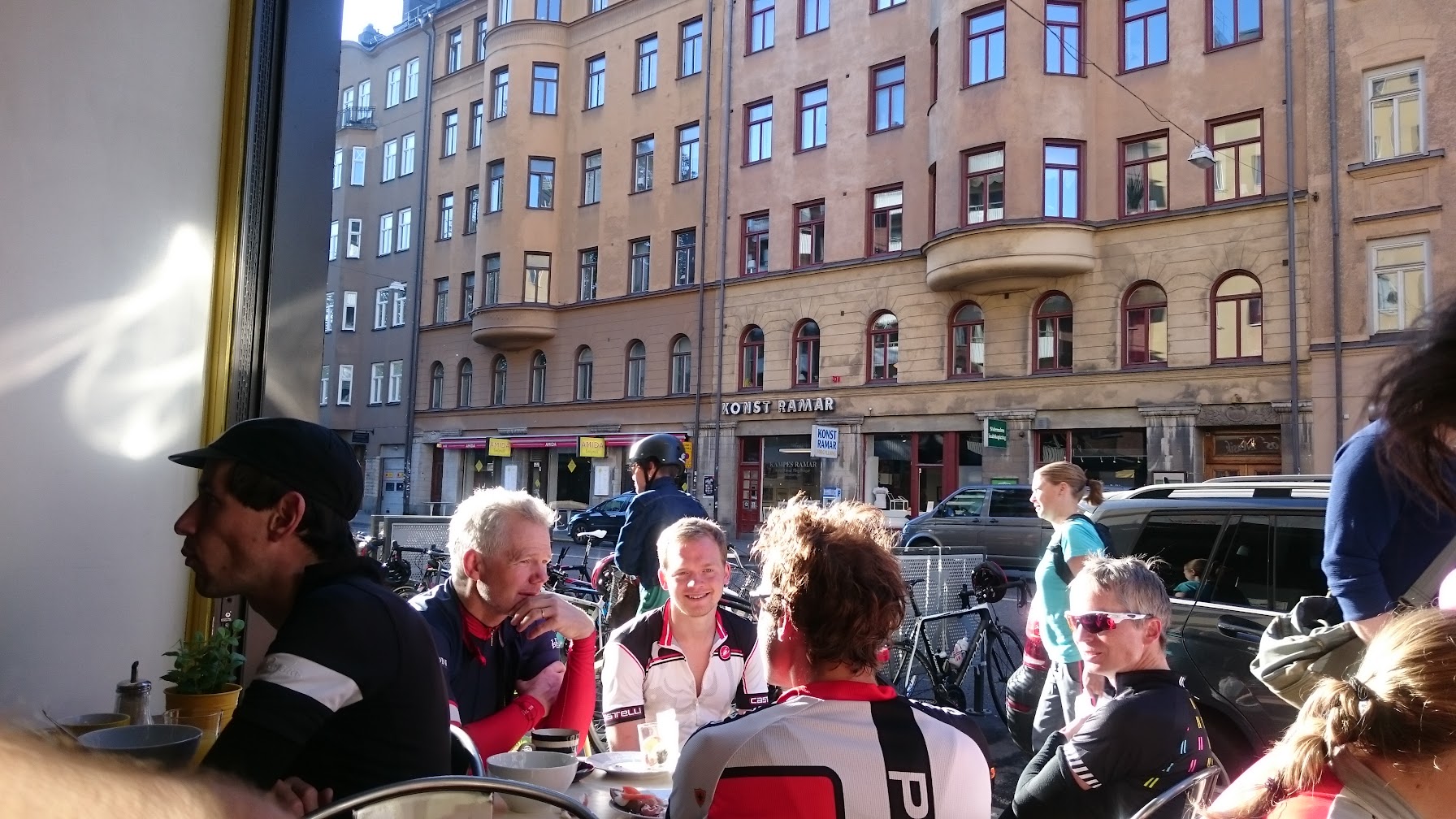 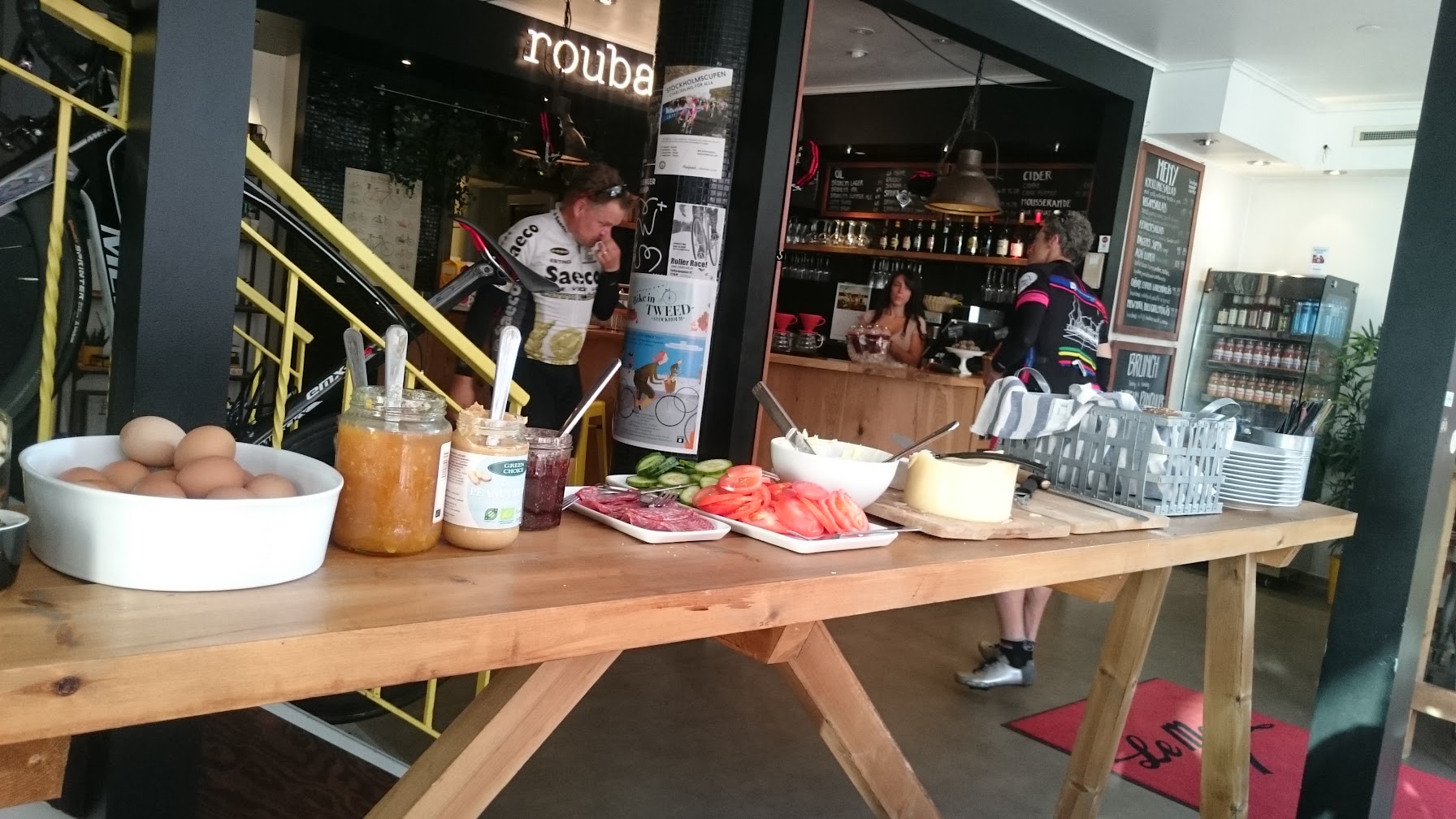 and we got some nice company by Nicolas who is the man behind all of this Le Peloton: 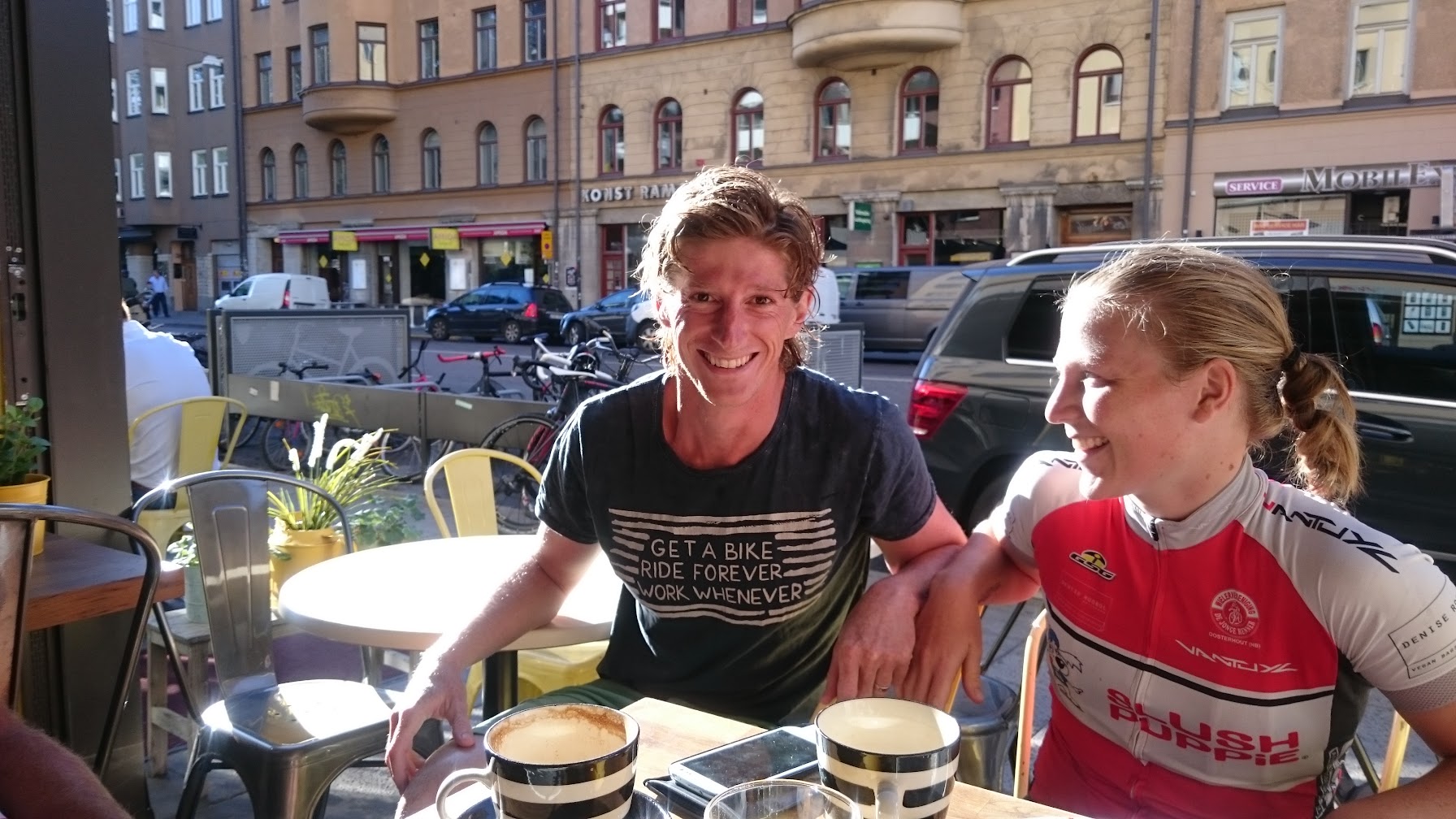 A great guy training so much more than just cycling.

Then after a wash of me and my bike and a day of work it was time for the days second ride. Lanterne Rouge with cafecycling Le Mond group. Met up with them close to work and rode the regular route to Gustavsberg. Got company by another guy for a while before he continued with his intervals. My body felt tired as understandable but also I got a bit to little food this afternoon so was hungry in the beginning. Never a good sign and the last part was hard in many ways and my heart rate was real low.

But riding in the sunset is awesome 😀 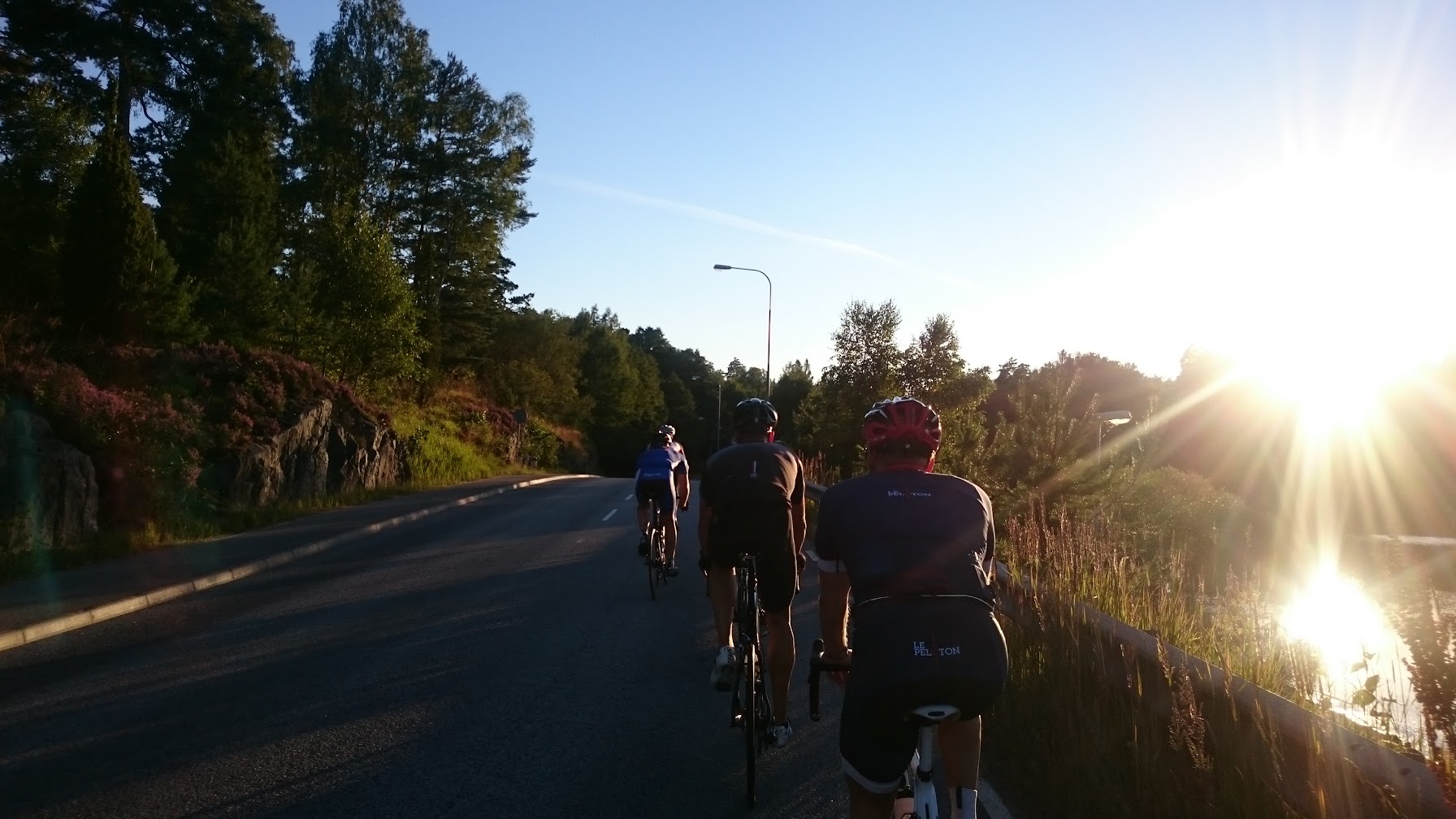 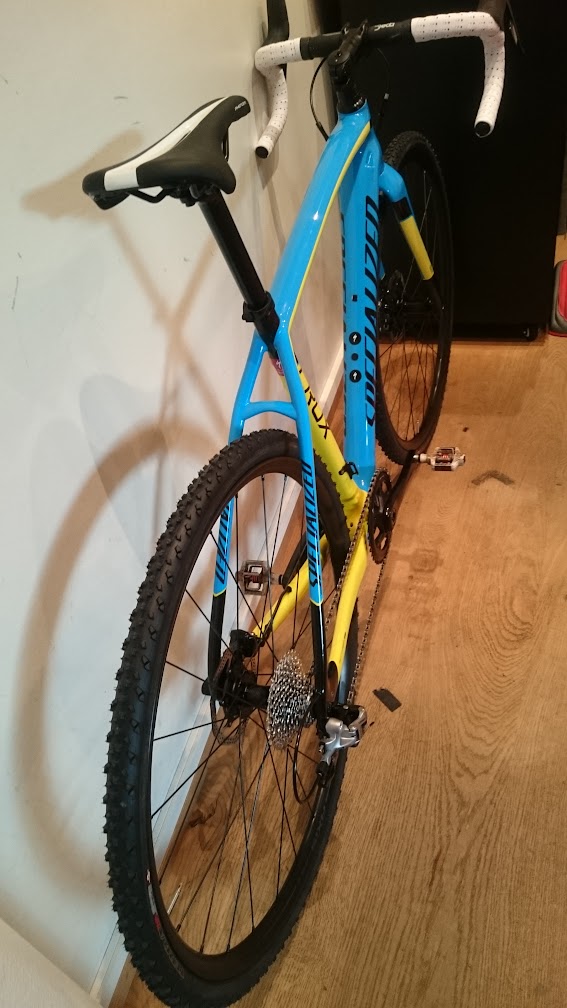 The Peloton this morning went pretty okey. Did all I could and was really tired afterwards, hard to do more: 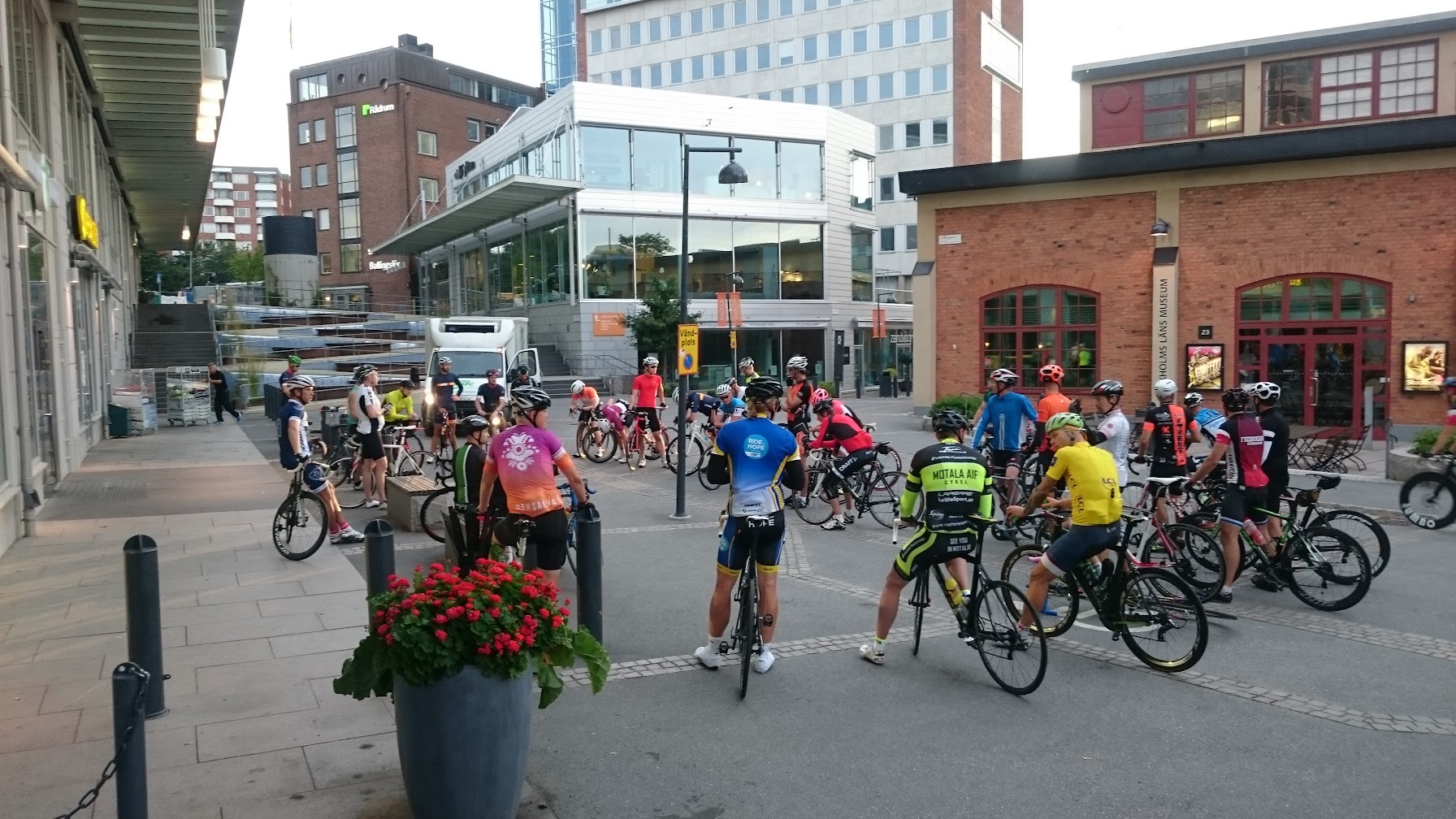 Me and Rille was the last pelotoners out from café Le Mond as usual: 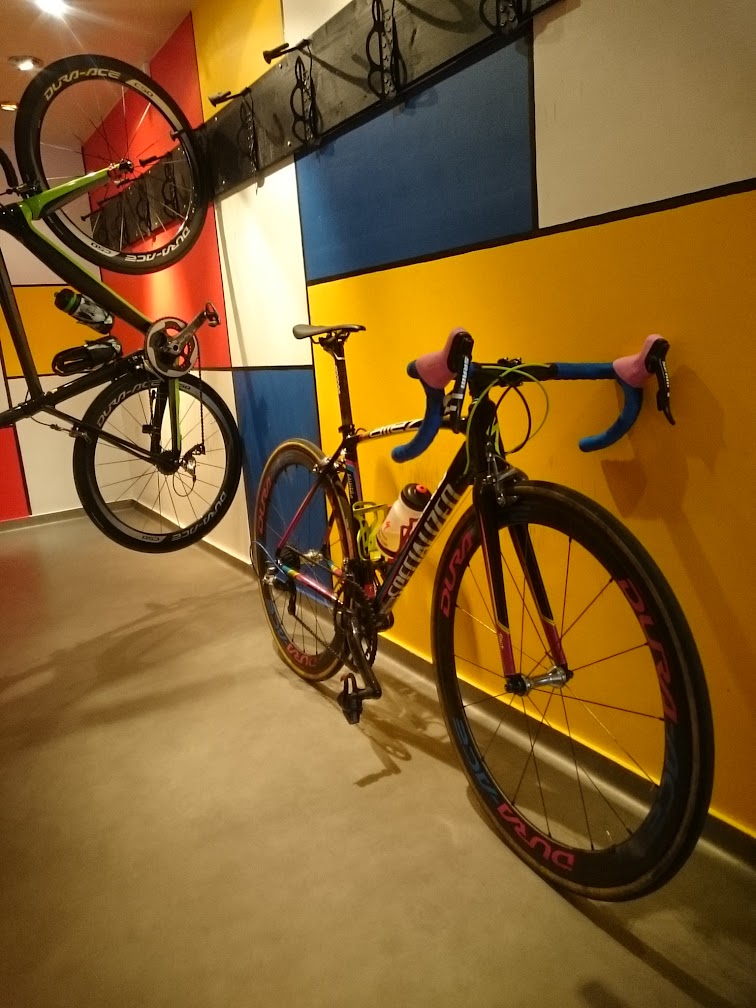 Map and stats from that: Strava

Today it was good weather and I had to ride home. So I did the best of the situation and joined Le Mond for a ride to Gustavsberg after work. Heavy legs deluxe so no real attacks today, got dropped some times too. Rille who said he was tired too was strong and fast and kept the pace up. He also took the picture of the evening: 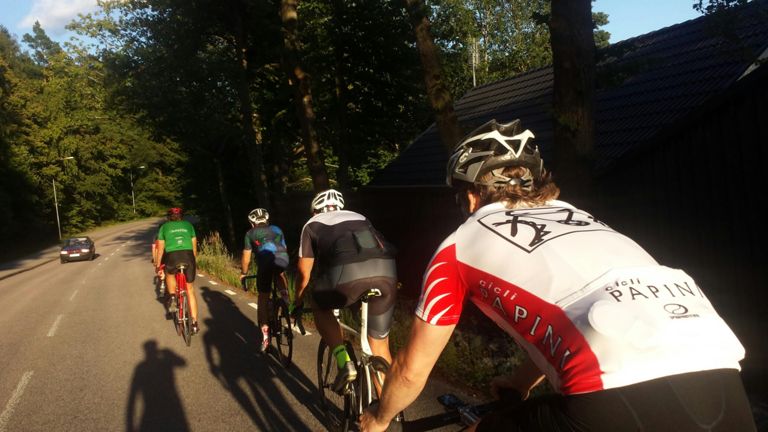 And a couple of pictures by Ena: 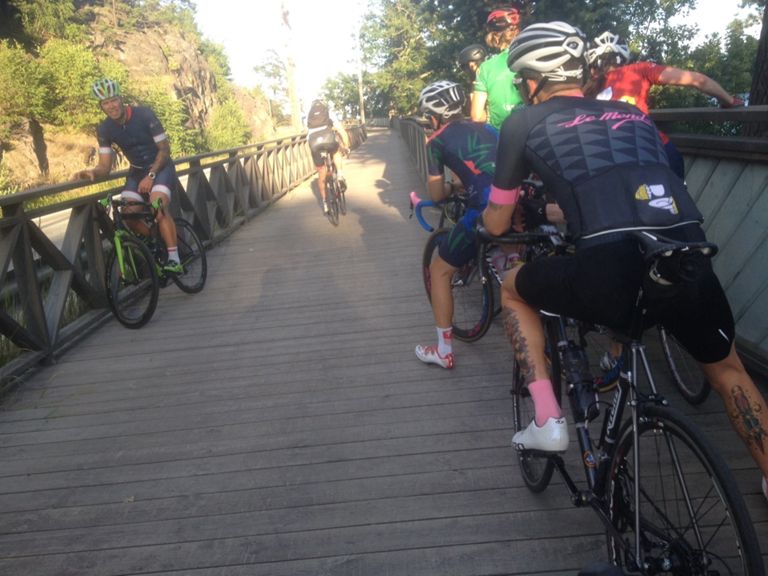 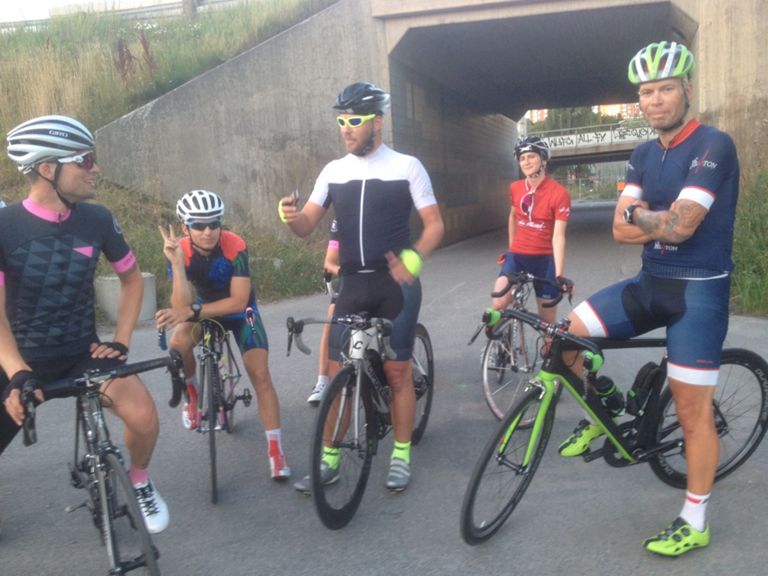 Today I found out the ”bad” thing with riding Le Peloton. It never goes faster, it just get harder. 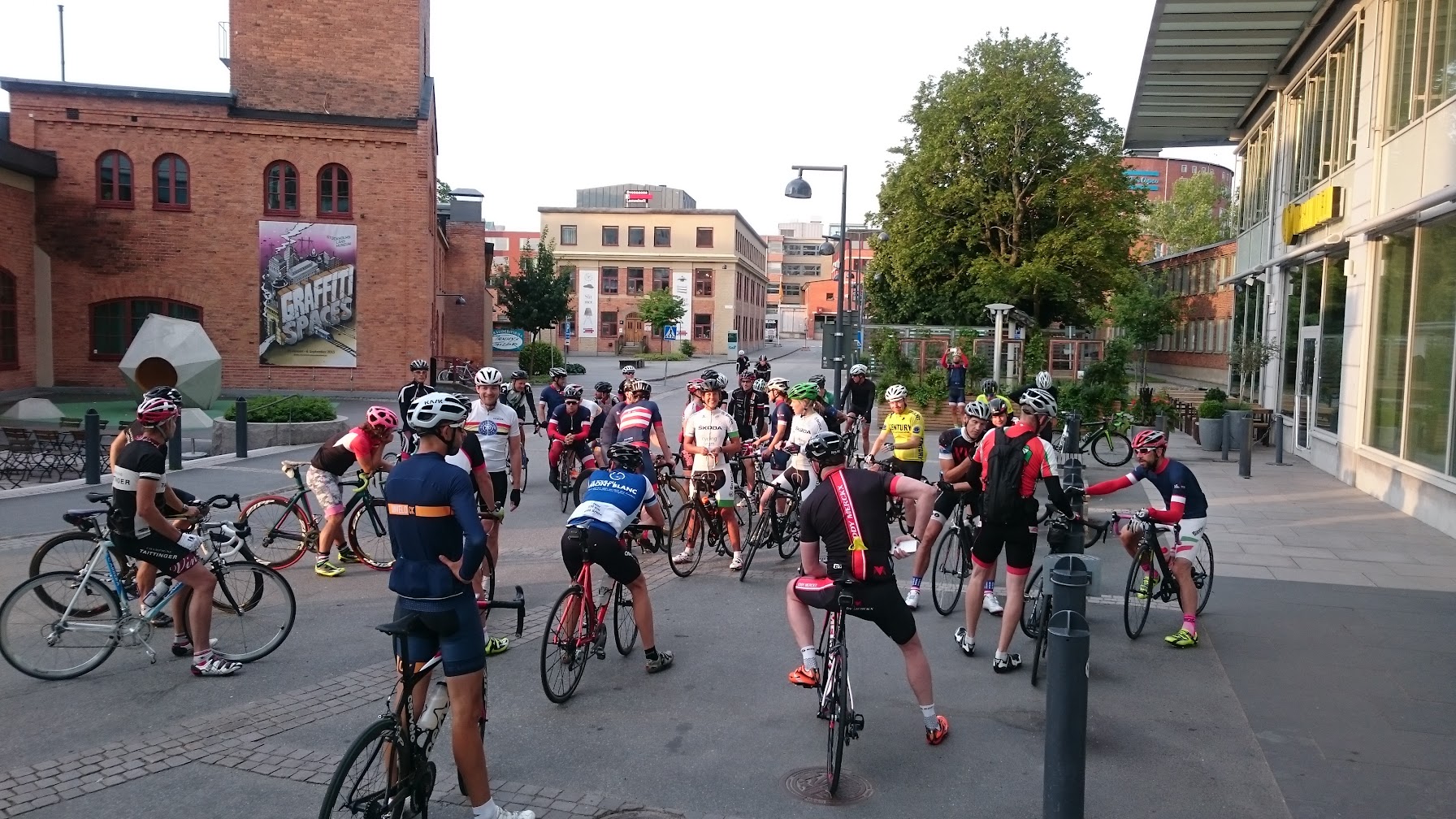 A big group today and it felt pretty good. I tried to hang on, did more turns than usual and never got dropped for real. Up to Fisksätra it felt ok but afterwards it maybe was the hardest thing I’ve done on a roadbike. I was very close to drop up Hellas but claimed me on a wheel. And coming to Älta trying to cover a gap in the front I felt like I should throw up. But i was still there. Did well up Lindalen and I was there. After the last straight I tried to hang on another guy who attacked and caught him with my legs standing straight out, rised again and pushed all I had to the Enskededalsign.

Not the fastest Peloton I’ve done but the hardest. And it was a great time. Great to feel good and feel the difference from spring where I got dropped real early. Let’s hope this will continue.

Ended as usual at café Le Mond and today we got cake to celebrate Nils and Johanna’s wedding. Two great pelotoners. Didn’t got them on a picture but one from Le Mond. Inside today as it was raining a bit: 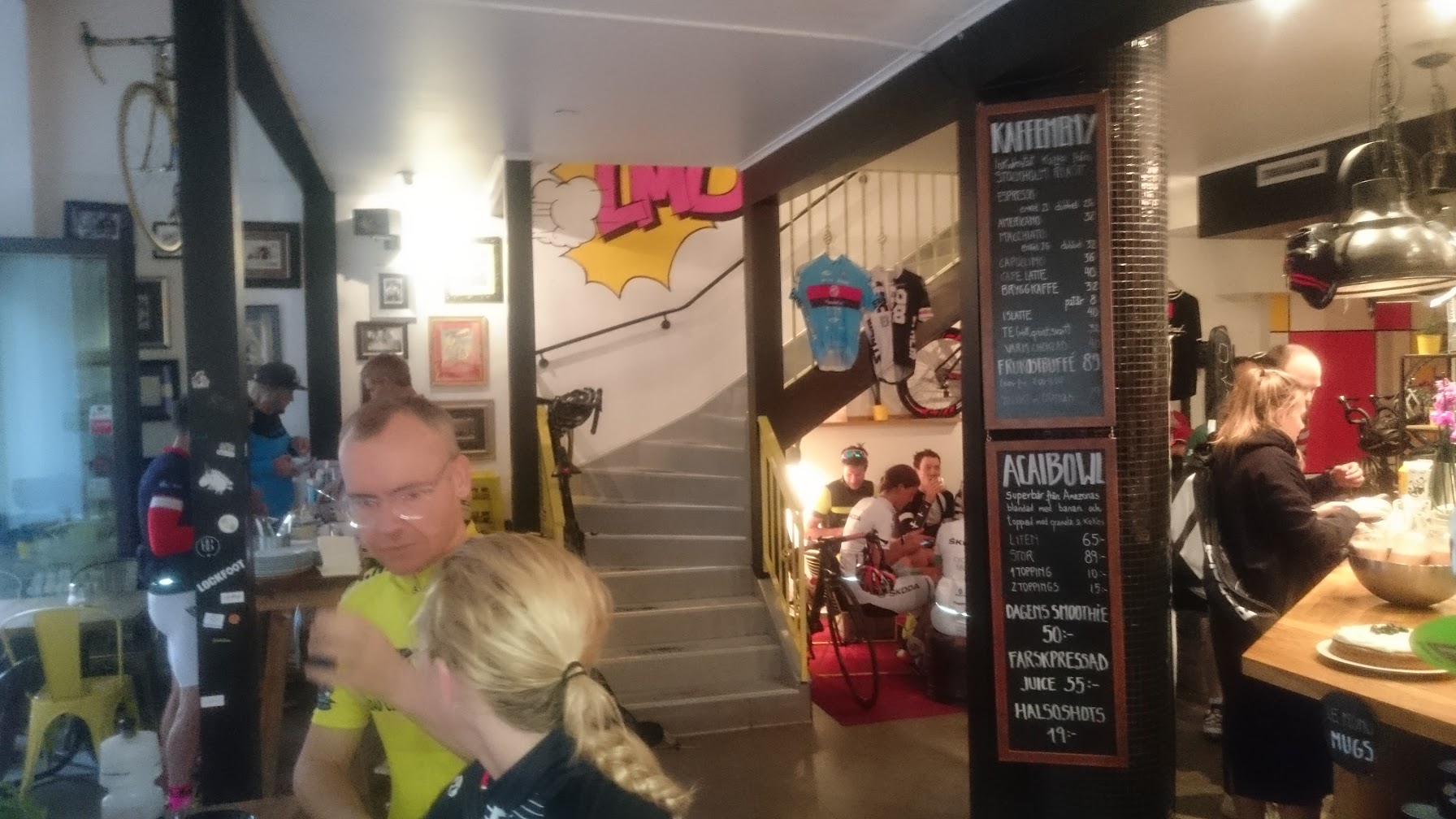 And the bike making it all be possible for me. My fastest bike I’ve owned: 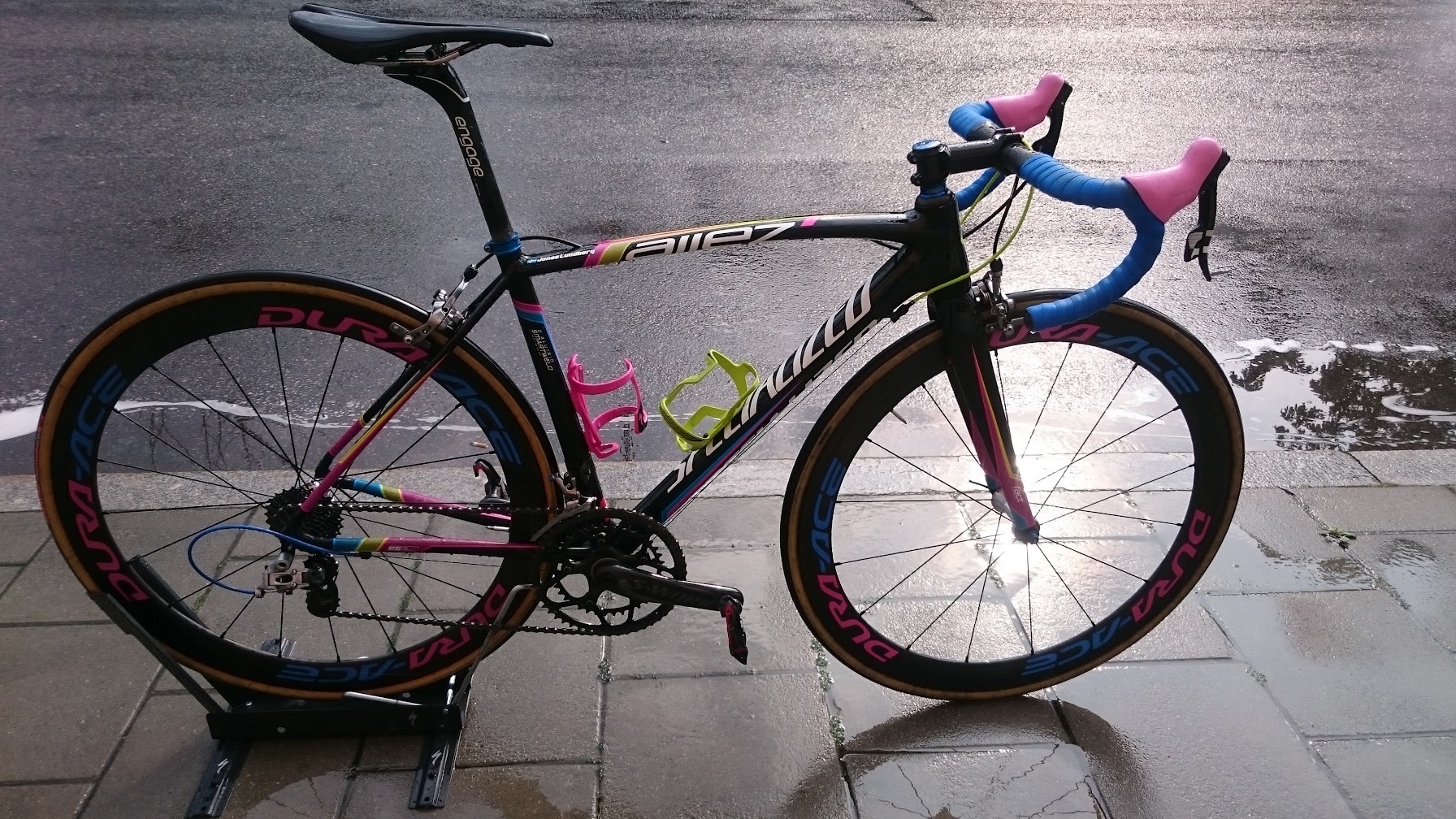 Sometimes it’s good to just ride easy and enjoy the nature we got. Have had a great day with three girls from She Rides today north of Stockholm on small beautiful roads. Ann-Sofie was our guide and had planned a great ride. Noor kept the mood of everyone on top all the time. Emelie pushed her limits the way we like it.

We missed the rain and ended with a nice fika. Nothing to complain on 😀

And thanks to Cykelspecialisten i Sickla a.k.a Specialized Concept Store Stockholm for the great bike: Tarmac Expert: 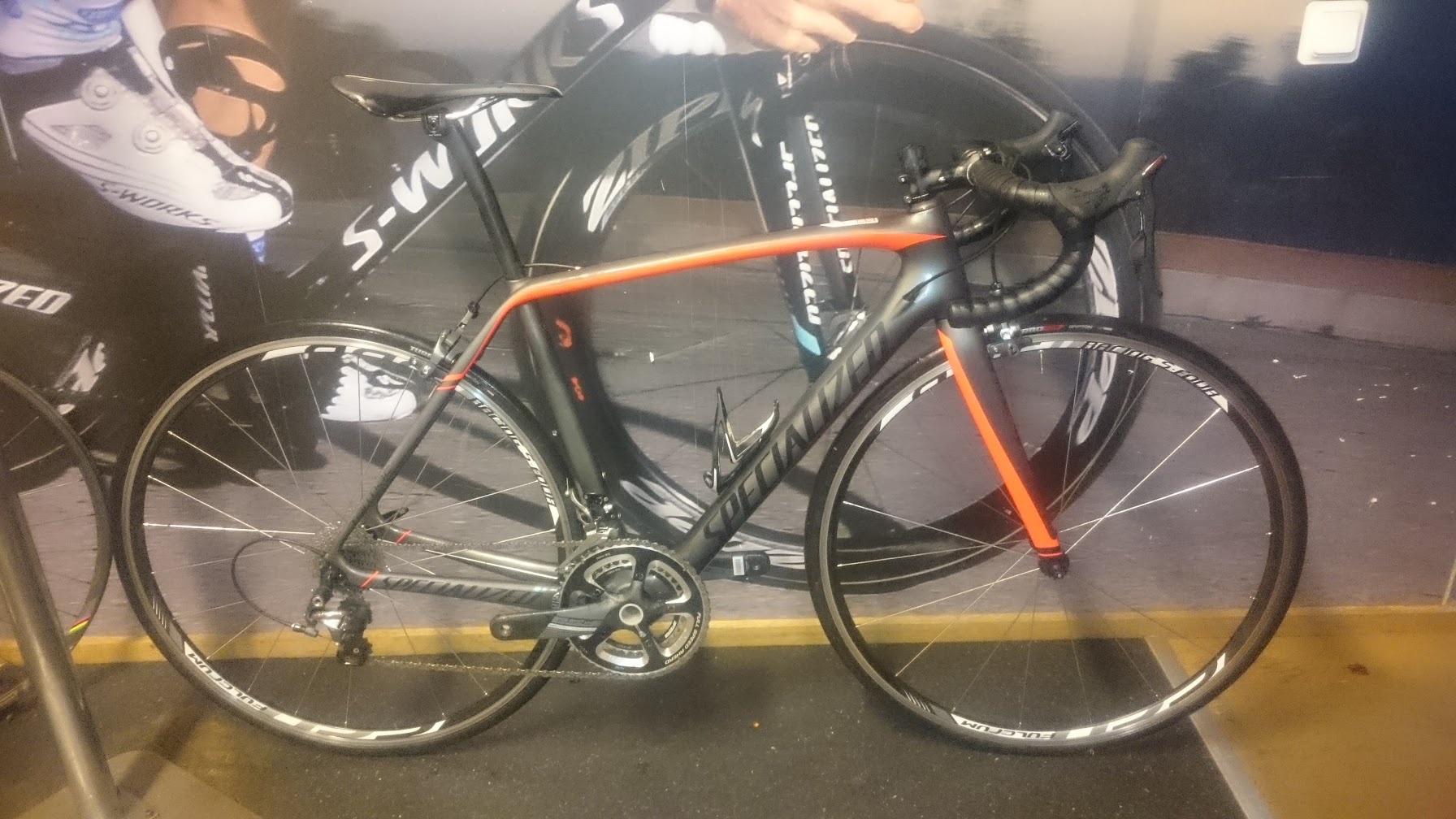 The regular start of a wednesday in Stockholm: 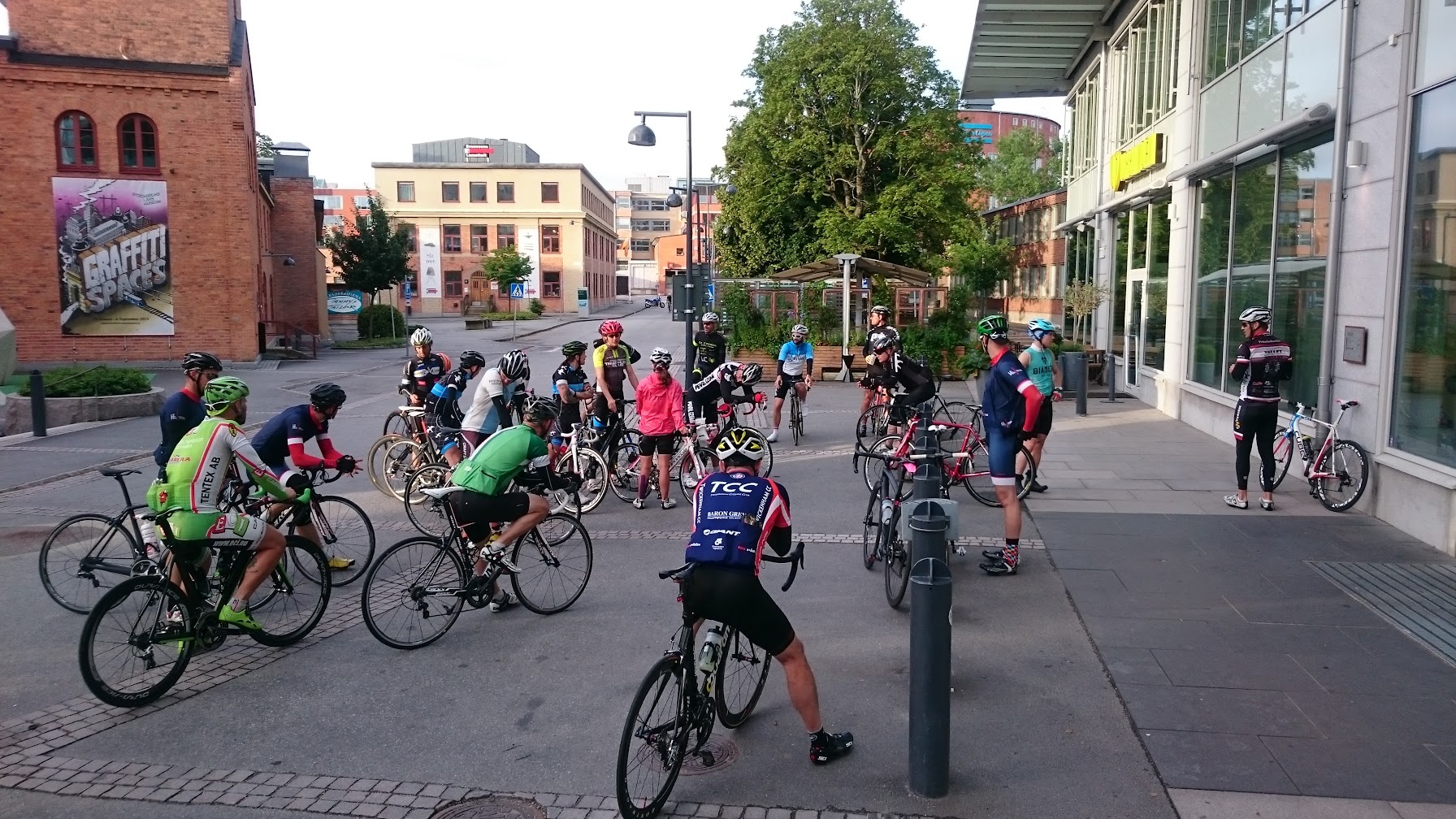 Only difference is my bike without wires and colour 😉

Except that I’m missing the extra punch it felt pretty good today. Felt good up Fisksätra and for the first time I managed to hang on in the climb from Saltsjö-Duvnäs to the roundabout in Ektorp 🙂 Usually get dropped when it flattens out after the steep part.

After Hästhagen we where a group who got dropped from the 4(?) in the front. Rille tried to make everyone go around but didn’t work so good. Kudos to him. Can’t understand people who attacks instead of just help keeping the pace high. Tried to go around too when people in front of me did. Will try to get better on friday and push harder and help more. Got real tired as usual and was a bit nice to go a shorter way to Hammarby Sjöstad and Magnus Johanssons bakery instead of Söder today, but far from as nice place and good breakfast.

Bikes had to stay outside: 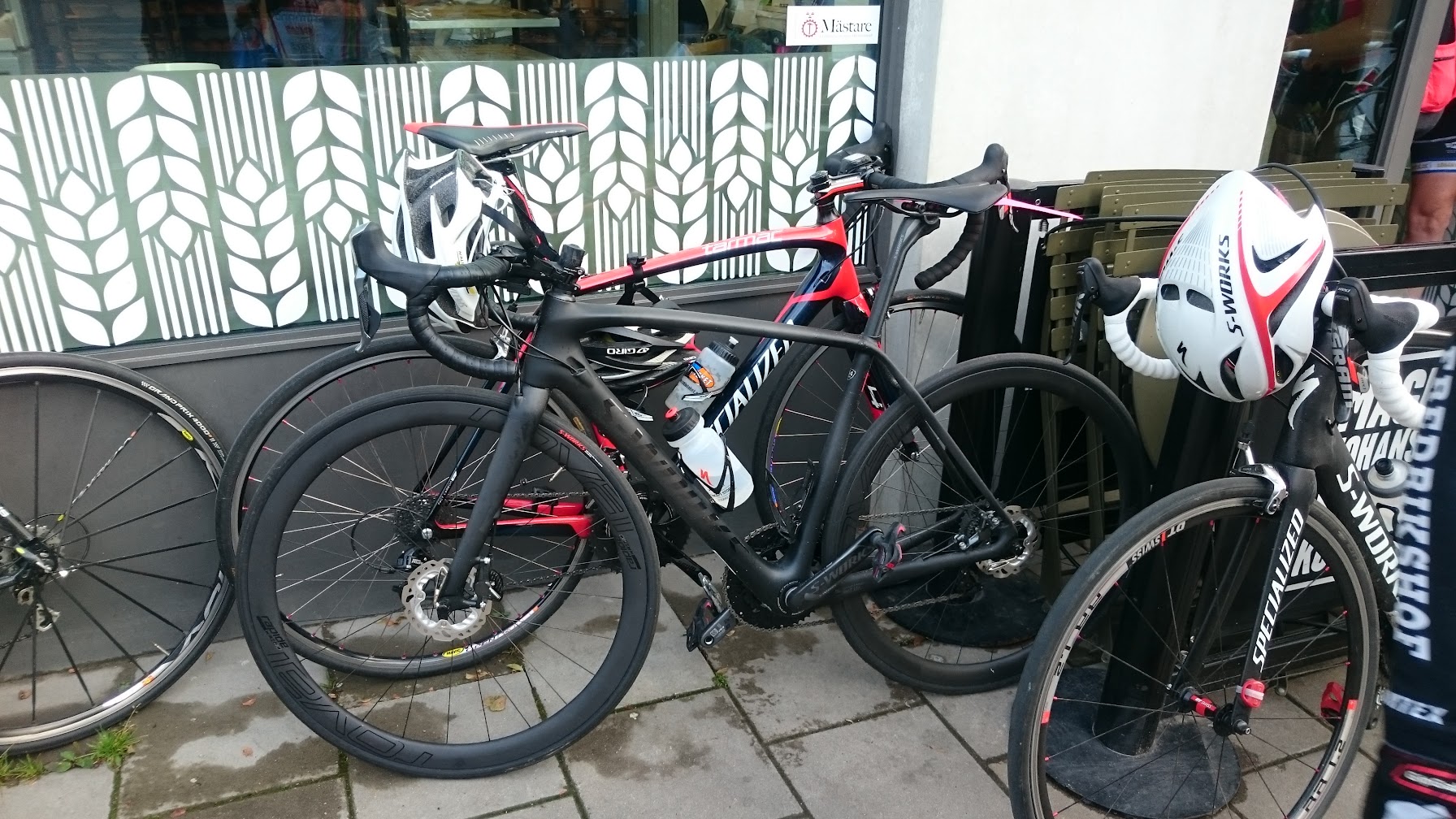 But pretty okey weather, but no real summer: 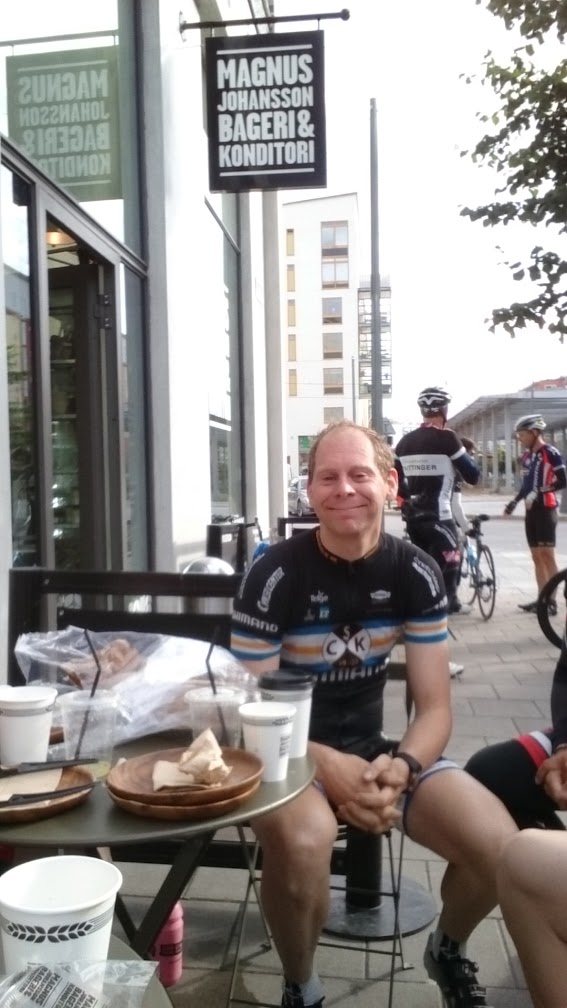 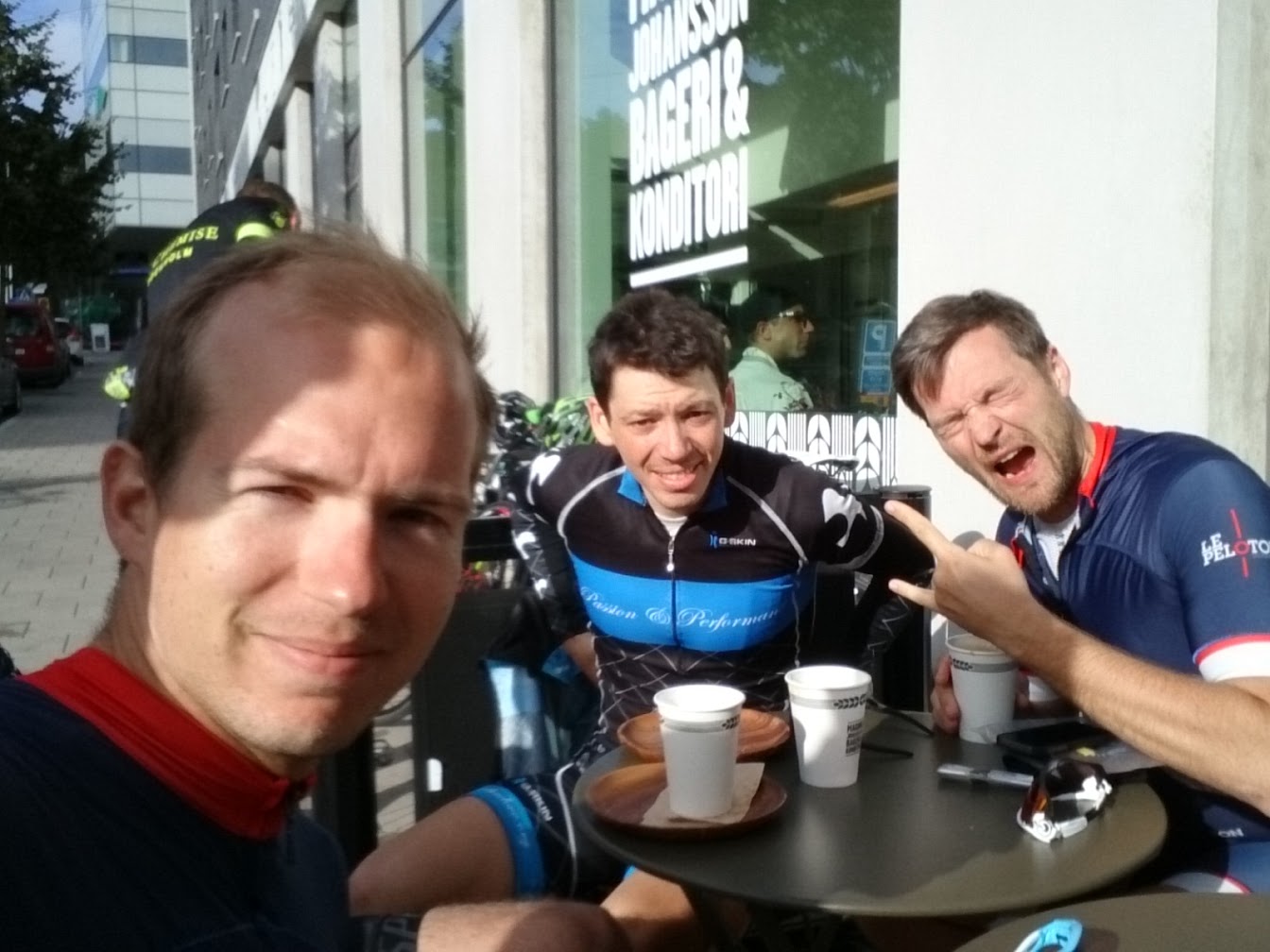 This post could also be about the best bike. My Trek Madone 6.2 I had last year was super in many ways but felt like the frame had a too low toptube and didn’t feel it so well. Today I rode a Specialized S-Works Tarmac Di2 Disc, a size too big after some consulting after work but the ride. 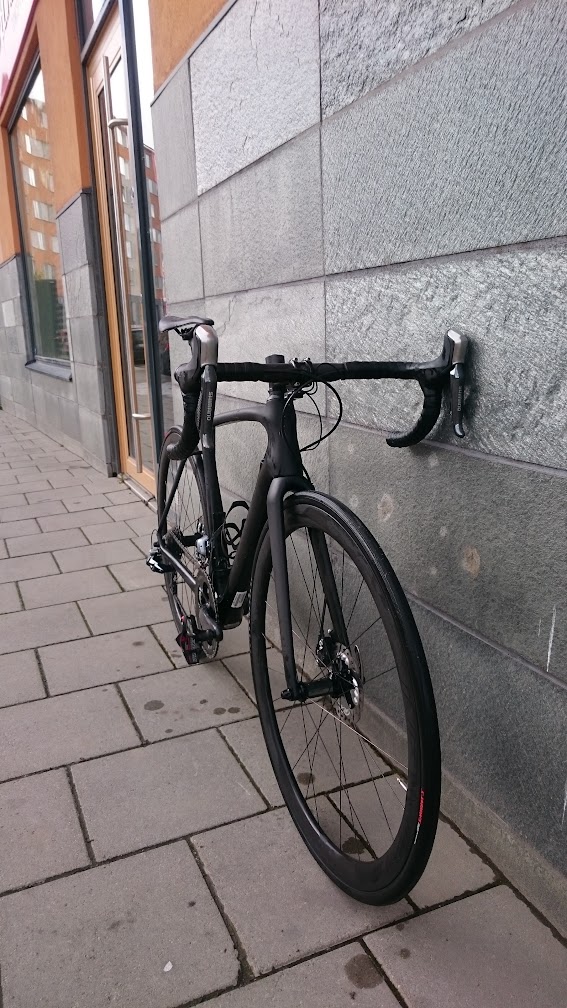 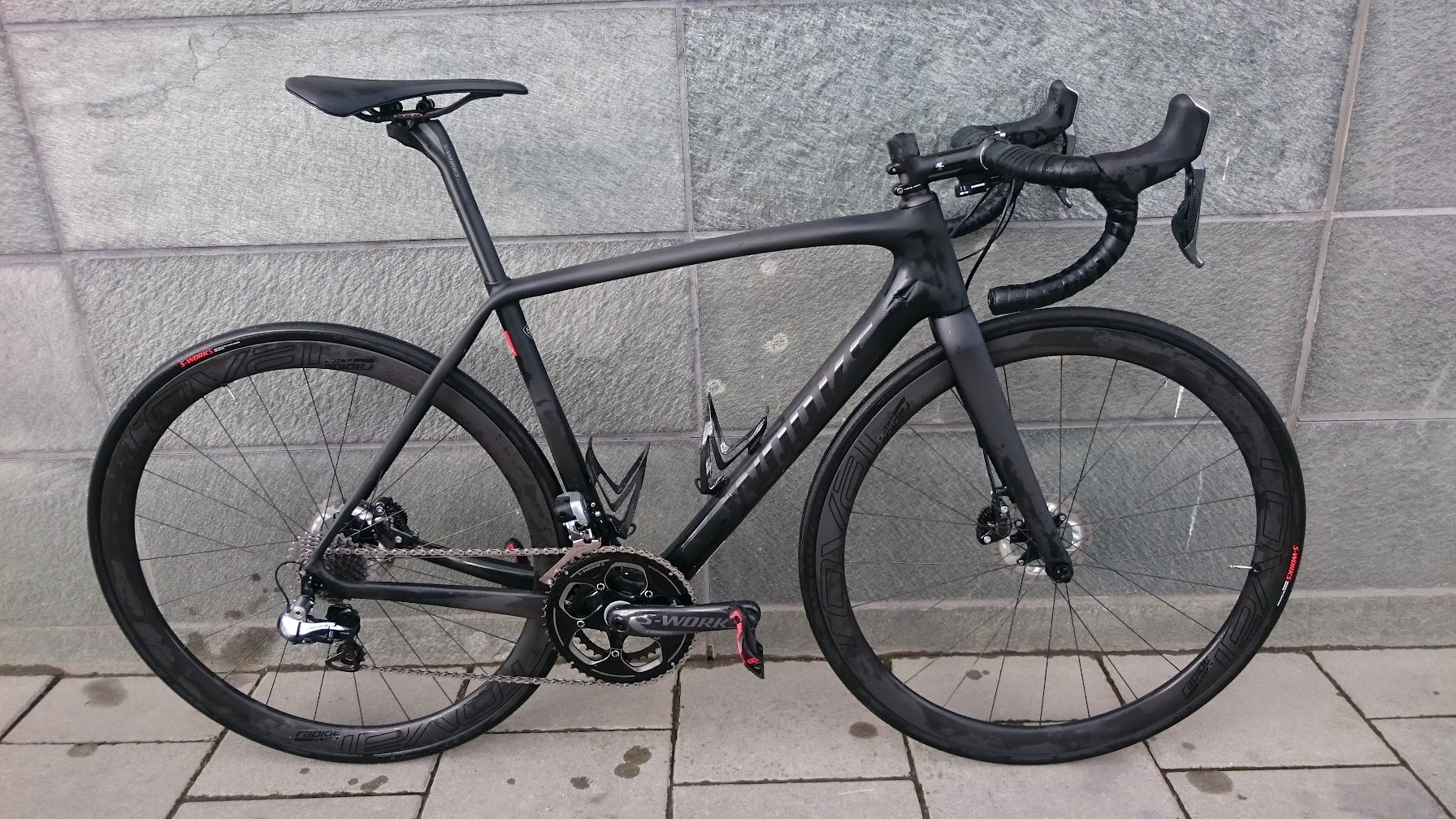 The Tarmac frame is a bit better handling than everything I’ve ridden before and carbon is better then alu like my Allez or an Caad10. It feels a bit soft but answers on everything better so it’s just the feeling of carbon that is stiff in the right way. the Roval CLX 40 disc is maybe not as stiff as Mavic Cosmic Carbone Ultimate but with better comfort and for a better price. Hydraulic disc brakes is just better, maybe I don’t need it but I want it, love the feel. Di2 is smooth and a bit fun but wouldn’t buy it.

The bike wasn’t extreme but better then good. The perfect combination without anything extreme. A bit odd but feels like it’s worth a bit extra as it costs.

Map and stats from today: Strava

Mtb in the rain after work today. Easy riding with a happy group so was fun even when we had to wait a lot. Fun to be good sometimes and not always be the slowest and Specialized Fast Track worked better than I thought in the wet 😉

Mostly of the riders this evening: 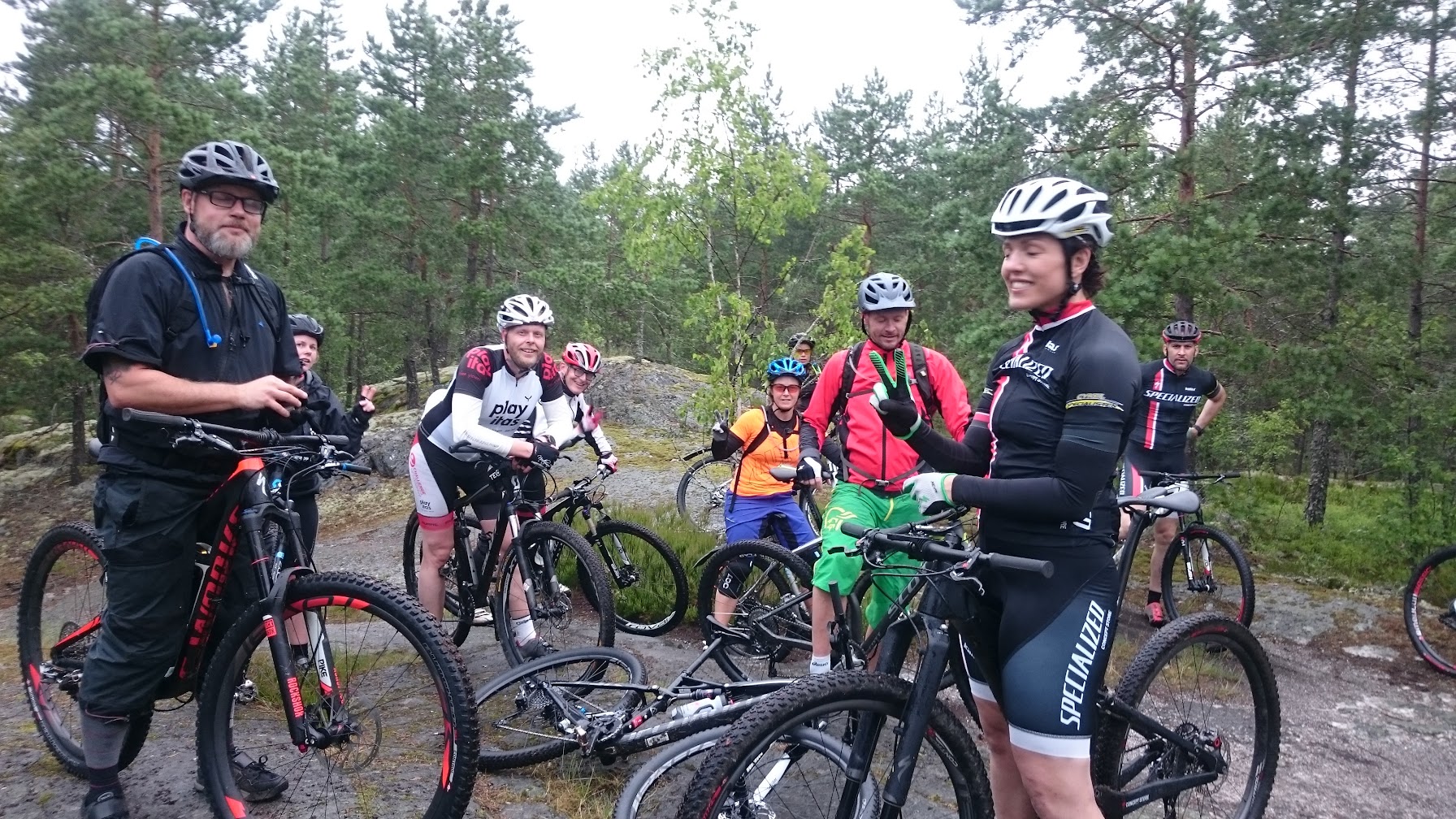 In the last part we rode a really muddy section with a lot of laughter 🙂 But Jaime also managed to puncture so here me helping him fixing it (while waiting for a couple of riders):

Fun ride so thanks Jessica for that 😀

Back at work we washed some bikes and I changed for a roadbike for tomorrows Le Peloton. Coming from an Epic to a Tarmac made it fun, felt fast and managed to get 3rd on a section 🙂