Specialized showing us the new Venge ViAS their way:

and then the new shoes from Specialized. S-Works 6 which got a new heelcup (like in the blue/fluo s-works?) and some new material:

And like Bont have had for a while and Giro got a pair of laced shoes called Sub6. Specializeds most aero shoe with a aero cover:

No hydraulic brakes like the patent pictures showing but special mechanical brakes:

Soon it’s here. The fastest bike ever produced by Specialized. And the first one with integrated hydraulic rim brakes. It’s not a tweak of todays Venge but a complete new bike, pretty much future too. Here is a better picture:

What do you think? Will it beat Cervelo, Trek, BMC and Pinarello?

Today the sun shined so I started the day riding around Älta to work to meet up with Jessica and Jaime for a ride. Rode out to Gustavsberg and took the little longer way back. Awesome morning with sun, sun and dry roads 🙂

Ended with a picture after Jaime got some breakfast: 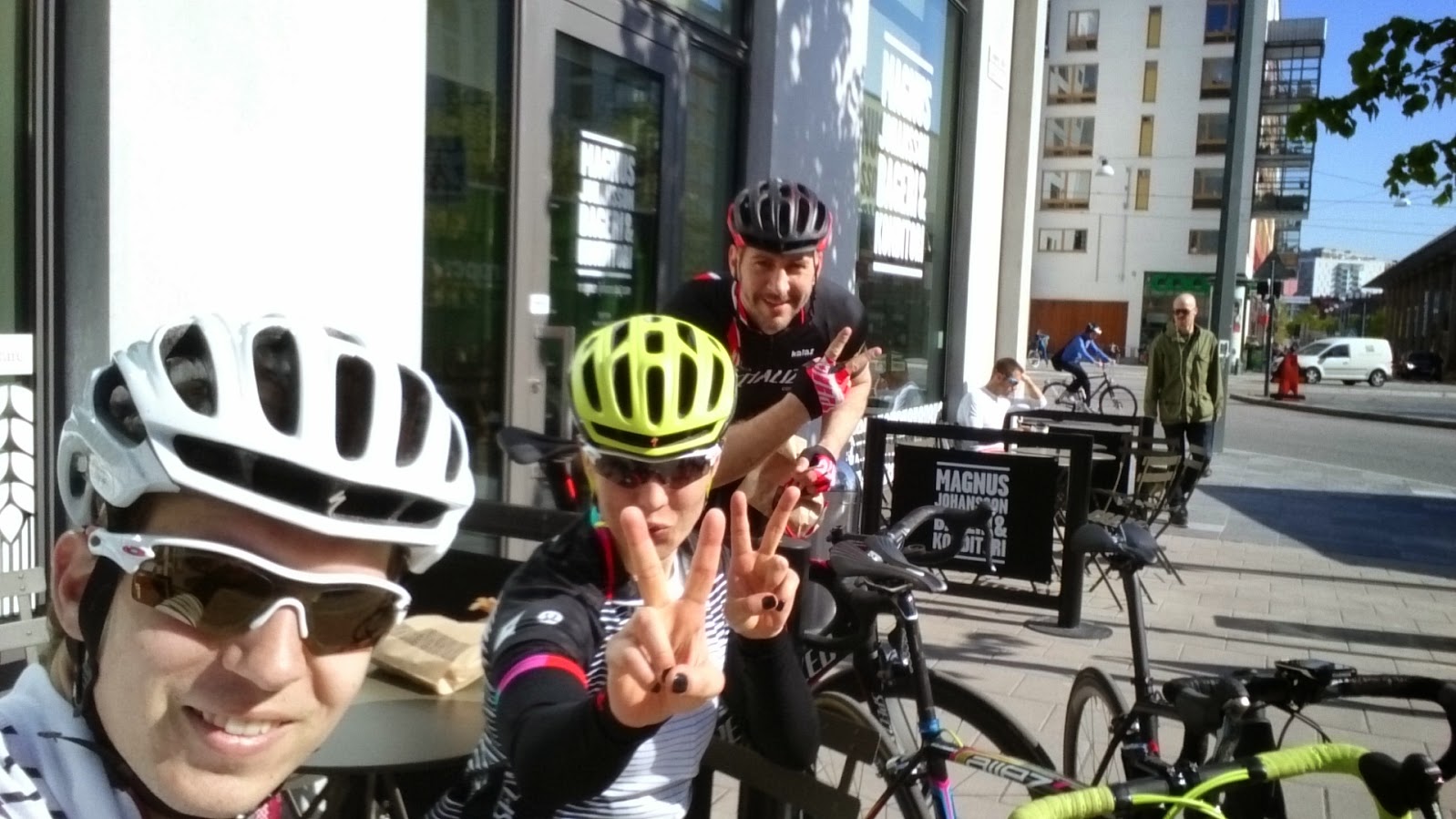 Map and stats of the morning: Movescount

This week the fast ladies race in Qatar and it seems like yesterday was a really good race. But first things first. Wiggle-Honda made a video from the 1st stage:

Feels like Qatar is the bunchsprintrace nr1. But not stage 2:

1st and 2nd in the overall:

And the breakaway that was:

So could Emma Johansson win today on stage 3?

If anyone of you that doesn’t live in Norway (or Switzerland maybe) had been riding with us today you had moved to Norway. Starting to ride with the ocean through an old town downside some mountains at 400-600m. Continuing next to a fjord between the mountains, passing a small town and then riding along the water on a small road meeting many riders and passing a peloton. Not so much cars as they are on a bigger road higher up.

clothing like this and perfect sunny spring weather. Over a bridge to Norways biggest inland island. Looks like this at first:

And yes, there is snow on top of the mountain to the right. So more in on the island and passing a lake:

Going uphill a really nice climb with switchbacks and all of that before we go downhill very long on a straight. Then a smaller road on the countryside where everything seems just WOW. When God created landscape he had his peak in Norway I think. Back to the bridge on a small road:

And then back around Ulriken as I posted pictures on before and you don’t want to see pictures from there today. Specially not on me as I started to get tired before Ytre Arna and after Åsane I just seemed dead, not so stylish as I wanted to be. In Eidsvågsneset I was so tired I only had one slow speed and felt like I just wanted to fall in a ditch and sleep for a while. But there where no ditches so had to pedalling.

But I won as when I heard of ice cream at Bryggen. Had to survive and I did thanks to my good friends. Stopped and parked our bikes and Roger took a photo:

The three Sram Redbikes, Petter who uses Shimano Dura-ace didn’t have time for ice cream but he has supported me with the earlier pictures from his blog Brunost o Cykelolja

And then after some time in the que we got our ice. Me and Birgitte enjoying good ice cream in the sun:

Ending with thanking my Carbomaniawheels for the speed today 🙂