You know people that buy a complete bike, adding pedals and bottle cages and then just ride it as it is?

I want to be like that but have my thought about different things and always ending up with changing a lot of parts. Like this week when I borrowed a Specialized S-Works Stumpjumper FSR 29 2017 and started to complain on the heavy Grid tires so even before I mounted pedals I changed to Control tires to get it a bit lighter 😉

Today I met up with Fredrich who has the same bikemodel but in size Large and he changed the bar, stem and tires so far 😉

We rode together with Alexander and Kangas this morning. Those can ride and I had a really hard time trying to keep up. So happy for the Öhlins dampers keeping me on track when I couldn’t and the bike got better the more I tried to push it 😀

Behind this thoughts is my roadbike. This year I was riding Sram Force1 that worked fine in Sweden with a regular Force22 rear derailleur. But had too much problem when I mounted my Force1 rear derailleur and never got it to work smooth. Wanted to have a 11-36 cassette when I went to France but it didn’t work and I had to go with 11-32. Same on Rapha 12Hills. Found it hopeless and planned to change back to 2×11 for 2017.

3rd thought is to keep it simple, focus on the riding and to change chain in time. Rode 7000km on my Force1 group without doing anything with the brakes except adjust them when I changed wheels. Flawless and the brakes felt like a dream with super modulation. Now every road disc brakes got Direct Mount which my Tarmac doesn’t have. Found a couple of old Sram Red22 hydraulic shifters at work and stopped thinking.

I will change the red color on them but that’s it. Fit and forget. My tarmac is the bike I’ve ridden the most in my life and it got a special place in my heart. Thought about selling it and change to something new but can’t of any better bike in the longterm so unless I get a super offer I will keep it. Really fun bike that keeps the roadriding enjoyable.

The options today was an epic gravelride west of Södertälje or a caféride from Le Mond to places like Ösmo. As the weather was really wet yesterday and riding with guys without fenders on wet gravel didn’t seem like an awesome idea for me, so slept a bit longer and left for Le Mond.

Like an early caféride the level is very random early in the year we lost a guy already when we left Stockholm city who thought it was too hard. Left was 6 riders who tried to stay together but with some with studs, some with summer tires, some have been riding all winter and some not it became gaps and waiting sometimes. All as a regular early spring ride. But funny (I thought who didn’t get dropped for real) and I’m happy doing rides I haven’t done in a long time.

I rode with colour. My new Specialized Deflect H2O gloves was awesome. And I saw the light all the way 😀

Was great weather today with around 6° and my Café du Cycliste rainbibs and legwarmers held my dry and warm all the time. Didn’t even needed a windproof west today.

But all good things comes to an end. We got split in two groups, Kalle started to talk about breakfast and that he was tired. My stomach started to question about food. Michael held the speed up. Because we came to this:

Then 3 guys took the train home. Me and Michael rode the hole way and Karim joined us for the first part to Tungelsta. Great ride on a sunday and now I know what to order at the café in Ösmo 😀

It was said to be -7°, Johan had -13° when he left home (almost neighbour). The coldest Peloton today and first it was just me and Johan for the photoshoot:

Then came 5 guys more. A little bit new route to not ride in the cross country skiingtracks and it was good. 4 at the front in the beginning with Magnus, Rasmus, Damian and me. Magnus dropped a little and at the start of the new part Rasmus had a little gap to me and Damian. I passed Damian and rode up to Rasmus, and kept that wheel until I dropped him when it got a bit rough. Caught him again and held the wheel good on Erstaviksvägen where it was pretty slippery I think but my Specialized tubulars was just awesome. Felt good to. At the turningpoint on the Erstaviks loop it was a bit rough again but it felt good, and for the first time I really felt how my CG-R seatpost worked with the damping. Think it need a bit more to work with than my featherweight.

Was a great morning even though it was really cold a couple of times, think I will get a pair of new gloves…

Magnus showed hos icy it was:

When you see ice like that it’s nice to be at Le Mond, where you even can get cappuccino without mention it, Liam is good 🙂 And a picture of Rasmus:

Rasmus got some film from the ride too, but the battery died so I’m not in it 😦

My great Diverge, it’s just awesome (with light wheels and without fenders):

Map and stats from today if you’re interested: Strava

Asked Magnus if he wanted to join me for some gravelriding this morning. instead he invited me to some road riding with a group of people. After a couple of messages I was free from work and plans where changed. 😉

Met up with Magnus and Sara first and rolled to Spotify to meet up the rest. 9 riders at 7.30 a Tuesday isn’t to bad. Lost two in the beginning so was 7 who rode together on many new roads for me.

After riding around 3h together we came back to Spotify and after a short coffeebreak and saying goodbye to Edvard and we headed south. Magnus stopped at his place while I and Sara continued to Älgö and back. She should ride 5h and I love riding 😉 Except the city centre Stockholm is really nice to ride from, great coast even when the sun isn’t shining and nice small roads. Specially a Tuesday when people are working and it isn’t so many cars outside.

After saying goodbye to Sara I headed to Bonne Mecanique for a lunch. Not so often when I can go there as I usually work the times they have opened. A good lunch and good company by Åke I planned to just roll home. Came 5min before I blew my rear tire. Why clinchers?

Changed tube (first time on road the latest 9 years) but the tire didn’t like it so had to have a low pressure and more weight on the front wheel than usual. Came home without further punctures 🙂

Except the puncture it was a super ride. Love riding on new roads with great people 🙂

Cycling after work yesterday with a great bunch of friends going hard, and not so hard. Felt better yesterday than usual as I didn’t ride hard this morning and while not being in such shape as Emil it felt good. And I got a bad picture of me, Emil and Isa a.k.a Team Le Mond: 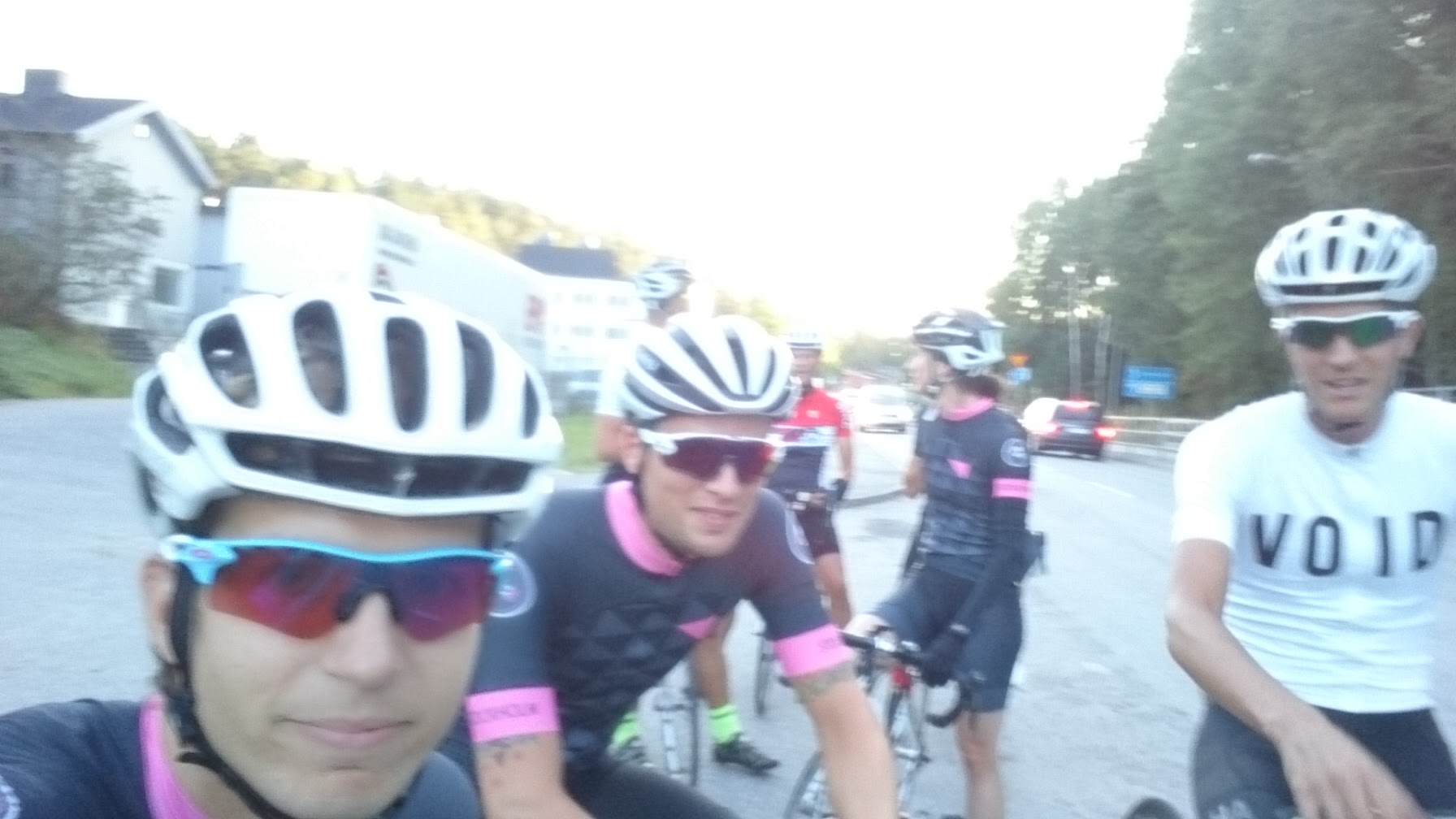 here a picture from Jimmie of us in front:

It was pure fun and while not feeling that I had any power in my legs Strava showed others. My plan to get my own KOM and not share it with some others up Skurubacken felt like a mistake. Planned how to ride, when to press and which gear I should use to not change gear more than needed and loose time. I had to gear down one time too much as my legs stiffened when the climb got steeper.

But still got the KOM and a PR by 2sec 🙂 My Allez is fast.

First Lanterne Rouge with the talk and show of lights too:

Also trying Specialized Power saddle a bit, CX before and now on my Allez. Feels much better then I first thought. Looks short and it is but you don’t think about on a roadbike:

Map and stats if you want to give me kudos 🙂 Strava